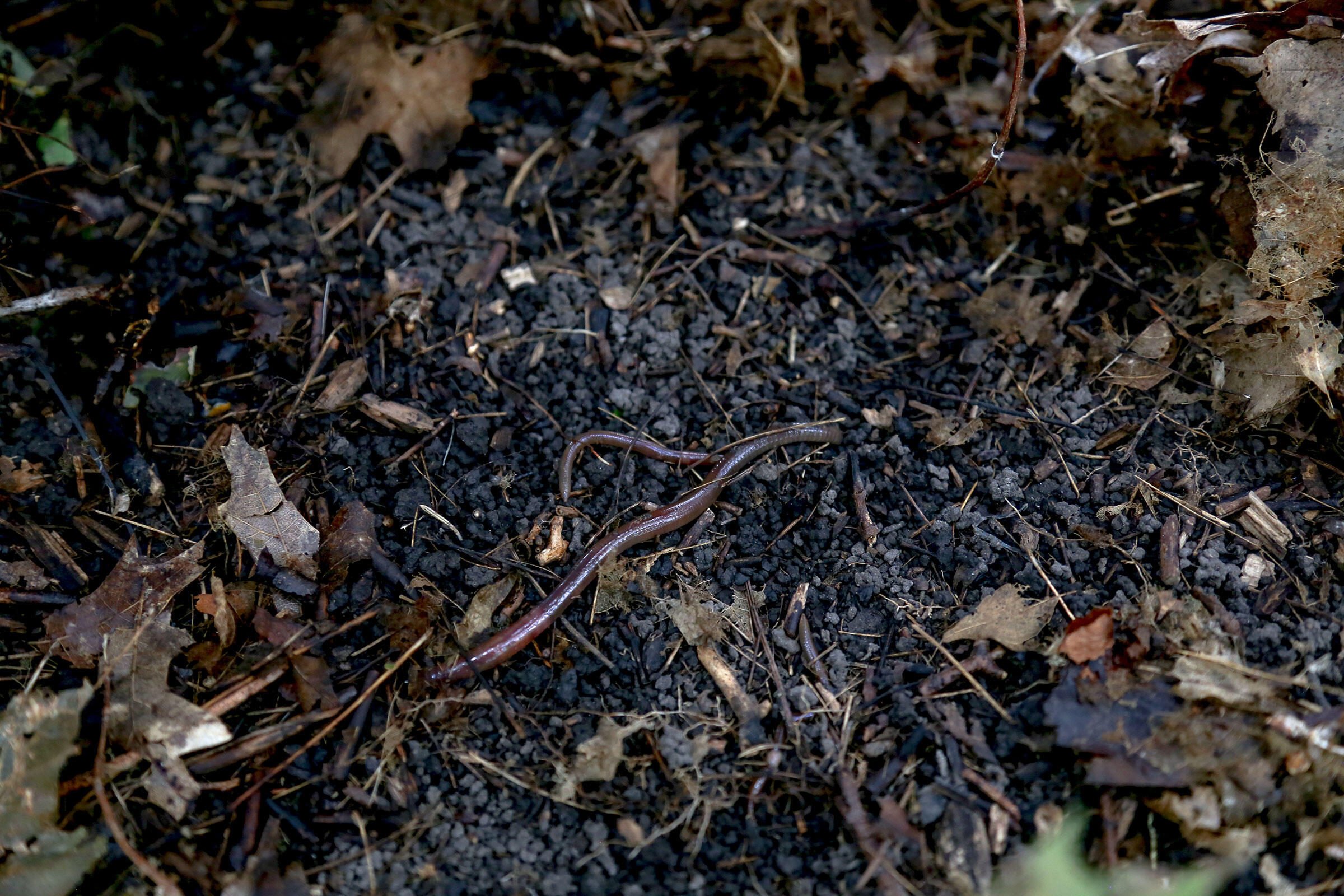 Jumping worms are like "stepping on the gas pedal to decomposition,” says ecologist Scott Loss, affecting soil structure and ultimately plant and animal life above the surface. Photo: Kaitlin Sullivan

The writhing worm in ecologist Brad Herrick’s hand is still fairly new in town, but it’s taken only a few years for its kind to collectively damage swaths of the University of Wisconsin–Madison Arboretum where he works. The unassuming invertebrates first arrived to this forest—a complex web of sugar maple, beech, yellow birch, and hemlock intended to mimic the state’s hardwood forests—in 2013, concealed in an order of mulch that carried castings of the invasive worm. Arboretum naturalists knew they were dealing with Asian jumping worms, but they had no idea how to stop them from taking over.

Until recently, these forests' soils were largely wormless. During the last ice age, which ended roughly 12,000 years ago, glaciers wiped out earthworms in what is now the northern United States. Absent the wriggling decomposers, forests evolved to rely on bacteria and fungi to break down leaves and twigs that litter the floor. Earthworms found in U.S. soils today are mostly invaders from Europe, but in the last few decades more than a dozen species of jumping worms—a more destructive group from Asia used as bait or in commercial mulch—have spread. In the 1990s, scientists began documenting their damage to forests in Southern Appalachia, the Northeast, and Oregon. Now, the worms have made it to the Upper Midwest, and scientists fear the invaders will inextricably alter the region's forest floor ecosystem and harm birds that nest there.

Once let loose, jumping worm invasions are hard to contain. Where most European worm species move about 30 feet per year, jumping worms can easily cover 17 acres, or roughly the size of 13 football fields, of new ground in a single season. In Illinois, experts confirmed the presence of jumping worms, also known as Alabama jumpers, crazy worms, and snake worms, in 2015. In the past year, first reports of the worms have come out of counties in Minnesota, Iowa, and Wisconsin, and this August scientists in Chicago confirmed that jumping worms had effectively invaded the entire city.

According to Scott Loss, a conservation biologist at Oklahoma State University, the spread of jumping worms could exacerbate the impact other invasive earthworms have already had on forests in eastern and Midwest forests.

Jumping worms can eliminate up to 95 percent of leaf litter in the forests they invade.

“It's like stepping on the gas pedal to decomposition,” Loss says. “Earthworms simplify what would otherwise be distinct [soil] layers. They mix that up and turn an otherwise diverse soil structure into a homogeneous mass.” Jumping worms have a particular talent for leaf processing. Unlike their European counterparts which burrow deep beneath the forest floor, jumping worms stay on the surface, rapidly consuming leaf litter and turning the once cohesive mass of soil into tiny crumbles that easily erode. One study found that jumping worms can eliminate up to 95 percent of leaf litter in the forests they invade. As a result, organic matter in this layer doesn't have a chance to decompose and return its nutrients to the terrain. In this altered soil it’s difficult for the goblin ferns and asters that line healthy forest floors to take root, Loss says.

Such losses may have ripple effects on ground-nesting birds, which rely on these plants to conceal their eggs from predators. Scientists haven't studied the avian impacts from jumping worms yet, but research on European earthworm invasions provides a hint. In a 2012 study, Loss found that populations of Hermit Thrushes and Ovenbirds were significantly lower in forested areas of Minnesota and Wisconsin where these earthworms were present. Loss predicts that earthworms could eventually cut the population of Ovenbirds by 25 percent in maple and birch forests.

Due to their ultra-destructive tendencies, it’s likely that jumping worms will permanently uncover more nesting territory and make things even worse, he says. Other songbirds such as Black-and-white Warblers and Canada Warblers, as well as game birds like Ruffed Grouse, could also experience such consequences.

The bugs that feed some forest-dwelling birds could also take a hit. In Appalachia, Asian jumping worms have already signficantly reduced populations of salamanders and millipedes in some areas. Loss notes that earthworm-eating birds like the American Woodcock, which forage for earthworms buried beneath thickets, could benefit from the new food source as long as they can adapt to the invasive cuisine. They may be forced to: Once they invade an area, jumping worms appear to replace other worms.

Whether or not jumping worms could make a nice meal for some birds, stopping the invasive species from spreading is imperative, says Lee Frelich, director of the University of Minnesota Center for Forest Ecology. His team has found some evidence that hotter and drier soils limit the worms' success, which could slow their spread in his state. If his team can determine just how hot, cold, or dry soil needs to be to keep Asian jumping worms out, they’ll be able to predict where on the continent the worms are most likely to spread to focus monitoring and eradication efforts.

In the meantime, researchers at the University of Wisconsin and the University of Minnesota are experimenting with using pesticides made with saponin, a chemical compound found in tea and maple leaves. Saponin-based pesticides are favored by golf course keepers trying to keep worms off the green, as opposed to more toxic chemicals often used in backyards. “Because it naturally occurs in plants, we hope saponin can control the worms without disrupting the ecosystem,” Frelich says. “There are a lot of poisons we could use, but they’d kill everything else, too.”