An adult Atlantic Puffin flies back to its nesting colony with a mouthful of Acadian redfish. Photo: Jean Hall

Is the Acadian Redfish Helping Puffins Adapt to Climate Change? 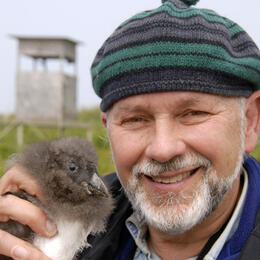 It was a big surprise when Project Puffin researchers on Matinicus Rock and Eastern Egg Rock discovered plump puffin chicks deep under granite boulders this past summer. With 2016 sea surface temperatures hitting near-record highs, island biologists feared a dismal nesting season, similar to 2013 when only about 10 percent of puffins fledged young. But the discovery that 75 percent of puffin pairs on Matinicus Rock fledged chicks was surprising because just nine miles away on Seal Island National Wildlife Refuge, only 57 percent of pairs fledged young. In contrast to the healthy puffin chicks at Matinicus Rock, most Seal Island puffin chicks were underweight, and many were starving. Even worse, at Machias Seal Island on the U.S./Canadian border, researchers reported the worst-ever nesting season—only 12 percent of the 5,000 puffin pairs fledged a chick, and most of these were so underweight that they were likely to perish at sea.

White hake and Atlantic herring are usually the principal forage fish for puffins in the Gulf of Maine, but warmer-than-usual sea surface temperatures made it difficult to find sufficient supplies of these cold-water fish.

Named for the crimson color of mature adults, Acadian redfish were first detected in puffin chick diets in Maine in 2011 and have been a regular and significant part of their diets in recent years. This is notable because redfish were once decimated so severely throughout their New England and Canadian Maritimes range that they nearly vanished. In 1996, the fish was classified as endangered by the International Union for Conservation of Nature. Acadian redfish are vulnerable to excessive fishing because they are long-lived fish with relatively low reproduction rates. Known widely as “ocean perch,” redfish is hailed as a fisheries success story, demonstrating how proper management under the Magnuson-Stevens Fishery Conservation Act made it possible for them to recover. Puffins feed their young the pelagic juvenile stage of redfish, as these small fish migrate from deep water to relatively shallower water near the mainland where they feed on zooplankton.

In contrast to the puffin colonies in eastern Gulf of Maine (most notably Machias Seal Island), the two westernmost puffin colonies (Matinicus Rock and Eastern Egg Rock) did well this year, perhaps because of the more discrete plankton blooms that nourish two important puffin forage fish—white hake and Acadian redfish. Gulf of Maine Common Terns have shown a similar response in recent years, with the colonies in the western half of the coast more productive than colonies in eastern Maine.

Blooms of tiny green phytoplankton (plant-like microbes) are a normal spring phenomenon in the Gulf of Maine. Phytoplankton are typically consumed by zooplankton, the dominant form being the copepod Calanus finmarchicus, the same species eaten by seabird forage fish and whales. Recent research by NOAA biologists has shown a pattern of phytoplankton blooms with increasing magnitude in the western region of the Gulf of Maine. Because phytoplankton fuels the food chain that produces the forage fish used by puffin chicks, we may have an explanation why puffin colonies in the western region of the Maine coast have been more successful than those in the eastern region.

Small forage fish such as Acadian redfish and white hake likely benefit from more abundant and healthier (better fed) zooplankton in the areas associated with the westernmost puffin colonies such as Matinicus Rock and Eastern Egg Rock. In contrast, there has been diminished nesting success for puffins and other seabirds in eastern Maine. Since about 2004, sea surface temperature has warmed at an increased rate, leading to some years with early spring phytoplankton blooms. Under these conditions, zooplankton is no longer synchronous with the plankton, leading to diminished food for the forage fish needed by the puffins at eastern colonies.

Protecting many puffin colonies helps to reduce risk, not just from predators, but from fluctuations of forage fish that result when cold water fish move away from an influx of warmer waters. Rare seabirds benefit from the restoration and protection of multiple sites because some sites will prove successful while others fail. Providing Maine seabirds with many nesting islands offers more resiliency to changing climate because some colonies may thrive while others suffer because of differences in plankton, forage fish and other local conditions.

We thank Dr. Kevin Friedland, NOAA, for his review of the section of this article on changes Gulf of Maine plankton.​

This article was originally posted on Audubon's Project Puffin website.