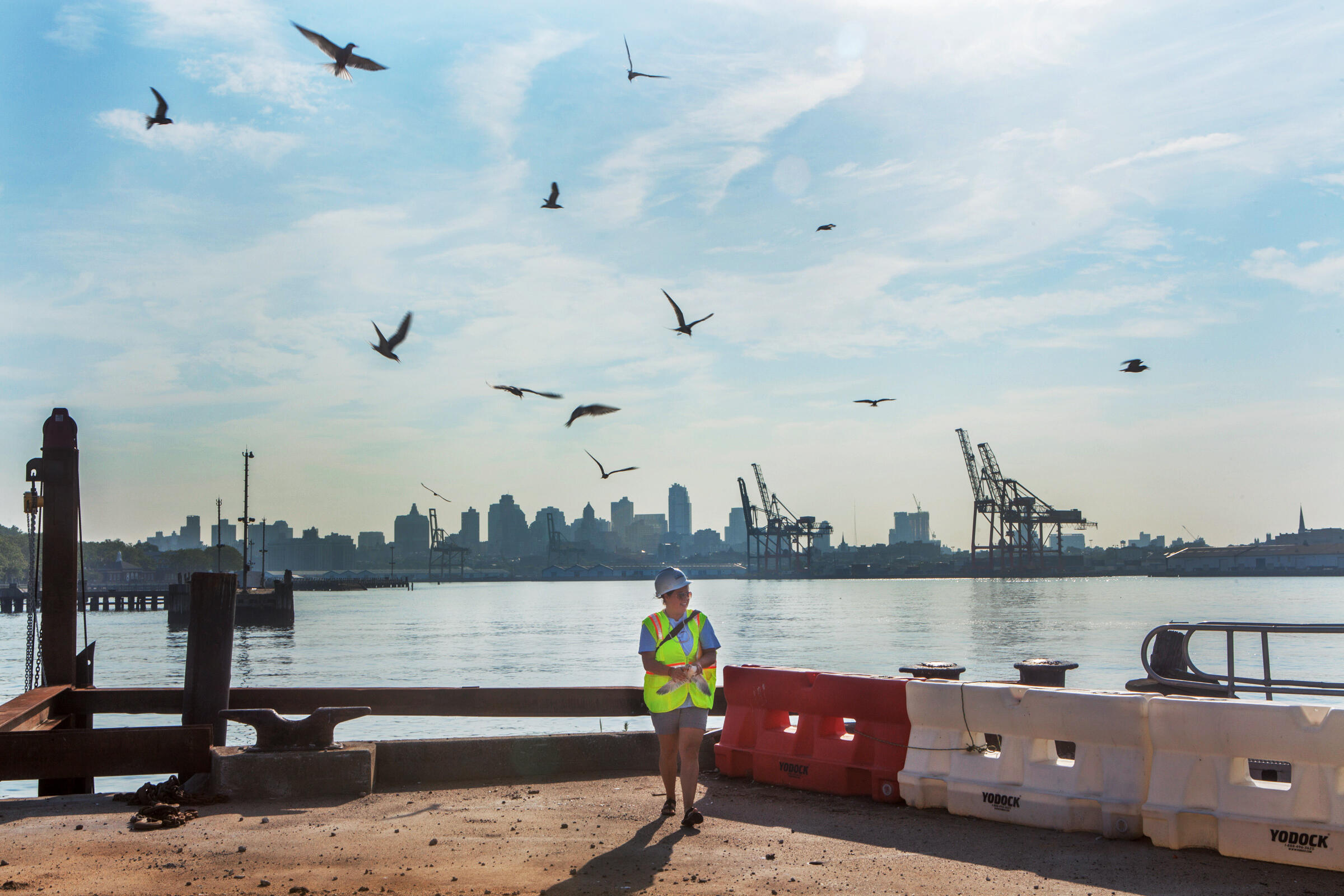 Elizabeth Craig, an avian researcher at Cornell University, is surrounded by Common Terns on Governors Island, New York, as she bands the chick in her hand. Photo: Camilla Cerea/Audubon

Is New York City Tern-ing Into a Haven for Seabirds?

A Common Tern colony is thriving in the shadow of Manhattan’s skyscrapers. Here’s the story of how it all came to be.

Undeterred by the swarm of angry, screeching Common Terns dive-bombing her, Cornell University researcher Liz Craig scoops up a chick and places it in her vest pocket. As her colleagues admire the feisty baby, she puts a numbered band on each of its legs and returns the young bird to its home—an active shipping pier within sight of Manhattan and the Statue of Liberty.

The concrete pier, one of three on Governors Island, a former military outpost in New York Harbor, is not the typical Common Tern haunt. These swift, fish-eating seabirds with black caps and orange bills usually nest on isolated beaches, dunes, and marshes. But as Craig points out, “Most of those habitats are disturbed or taken over by humans or destroyed,” particularly in the New York City area. That drives terns to occasionally try out more unusual spots, such as rooftops or even airport runways.

The piers at Governors Island are similarly less than ideal. On the hard, smooth surfaces, eggs can be blown around by the wind, and the young birds don’t get much shelter, Craig says. Noisy helicopters carrying tourists also zip by frequently. Still, Craig says that these manmade structures may become lifelines as sea-level rise takes a toll on the birds’ natural nesting areas. She also points out that Common Terns, which are listed as threatened in New York state, “seem like they’re pretty stable and doing well” on Governors Island. The most recent population count, done in June, found 72 pairs. (Common Terns sometimes nest in solo pairs, or in colonies of up to thousands of pairs.)

No one knows exactly how long the colony’s been here. Annie Barry, a National Park Service volunteer, discovered it in 2008, but she speculates that it might have been in place as early as the mid-1980s, when Yankee Pier, named for its Y shape, was decommissioned after being hit by a cargo ship in the fog. Governors Island was not even open to the public until 2003, when the federal government sold it to New York for $1.

Barry began monitoring the colony, which had by then spilled over to the nearby L-shaped Lima Pier and T-shaped Tango Pier. But since the piers are closed off to the public, she had a hard time getting accurate numbers. “It involved a lot of standing up on tall things,” she says. A coordinated scientific effort was finally launched in 2013, led by New York City Audubon. That first year, the researchers banded and counted birds on all three piers, donning hard hats so as not to be skewered by angry parents. “They’ll knock [the hard hat] right off your noggin if you’re not paying attention,” says Barry, who is also part of Craig’s banding crew. “And they’ll poop on you, too. It’s one of their defense mechanisms.”

Soon after those efforts had begun, a portion of Yankee Pier collapsed, and the researchers’ access was once again restricted because of safety concerns. They have since focused on Lima, the only pier currently open to commercial boats, bolstering the habitat with crushed oyster shells and small wooden shelters. “Even something as simple as throwing grass clippings or hay—that can make a big difference,” Craig says. Funding permitting, she and her partners at New York City Audubon would like to install a webcam, use a drone for remote monitoring, and perhaps get hold of a boat so they can improve the other two piers, too. “They’re being forced to use suboptimal habitat,” Craig says, “but we can make it better for them.” With any luck, she adds, the colony’s population will soon grow. 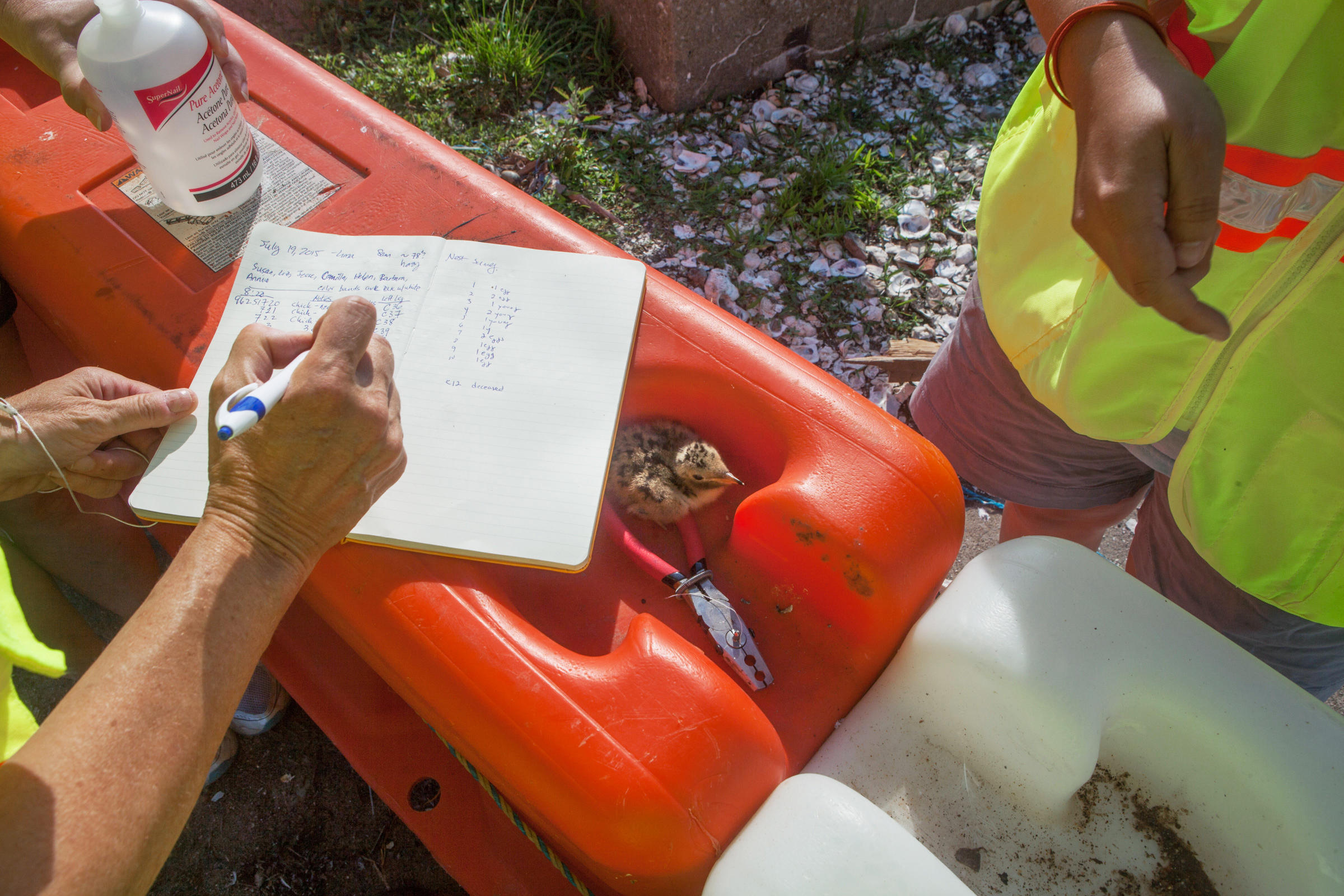 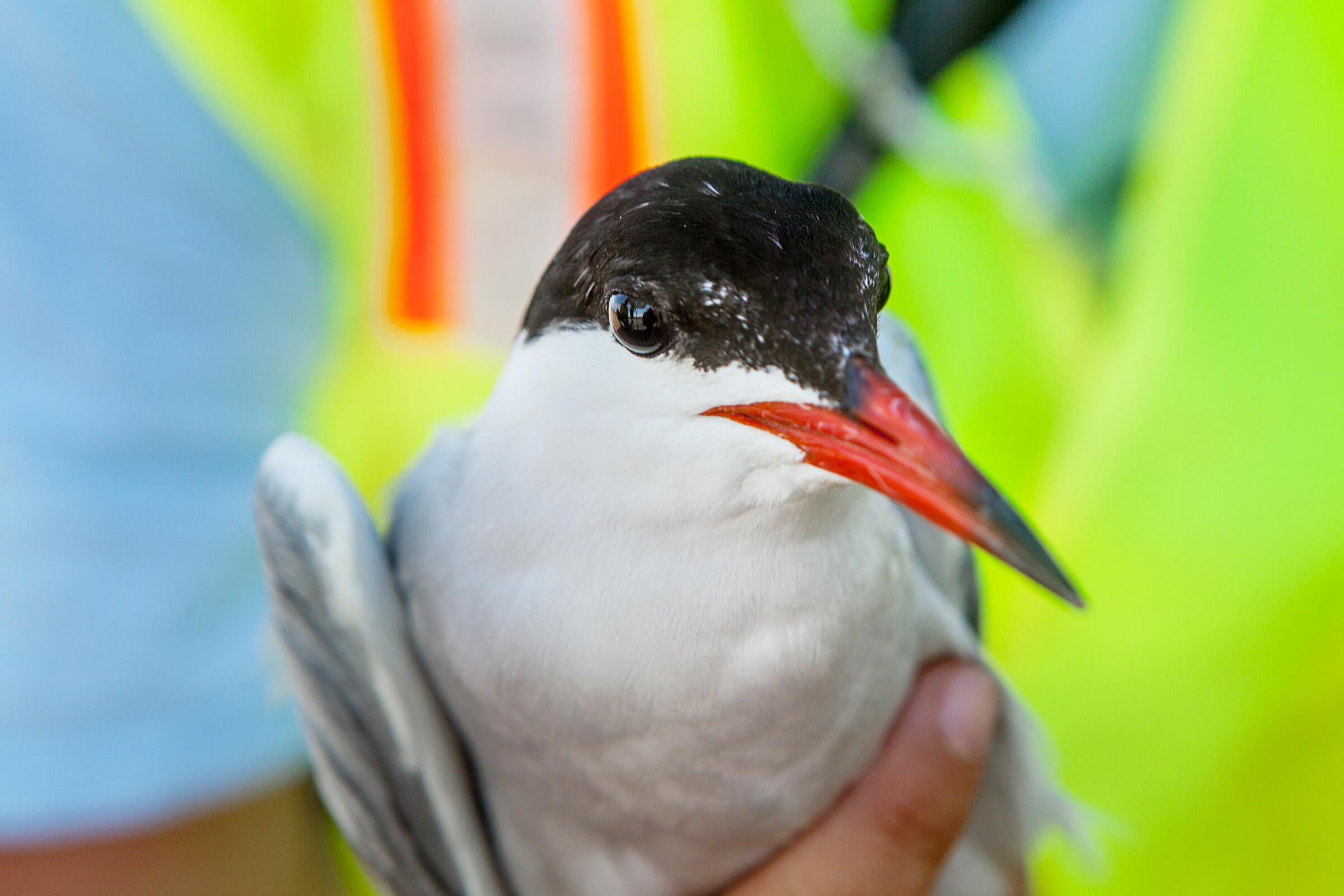 In the past three seasons of banding, Craig and her team have discovered terns that have returned to Governors Island, most often to the same pier. Though this kind of site fidelity isn’t uncommon in seabirds, it’s a sign that the population is self-sustaining, says Susan Elbin, director of conservation and science at New York City Audubon. “The birds aren’t stupid,” she says. “They’re not going to come back to a place that doesn’t provide what they need.”

The researchers also found a tern that had been tagged in Argentina, indicating that’s where at least part of the colony spends the winter. Confirming this could prompt conservation action in South America as well. “It doesn’t make sense to protect them on one end and not the other,” Elbin notes. 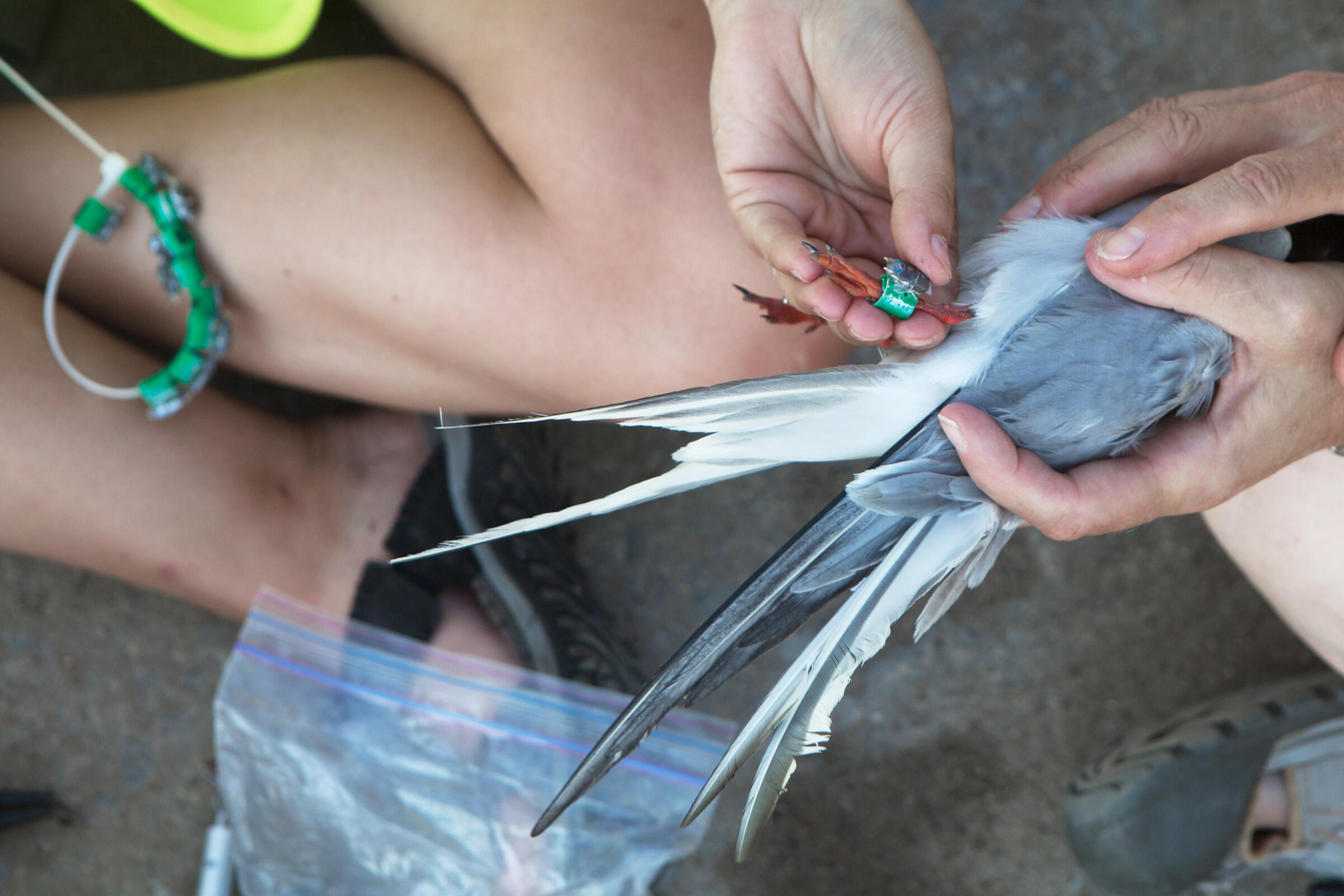 Geolocators like this one can help scientists figure out where in South America the terns are wintering. Photo: Camilla Cerea/Audubon 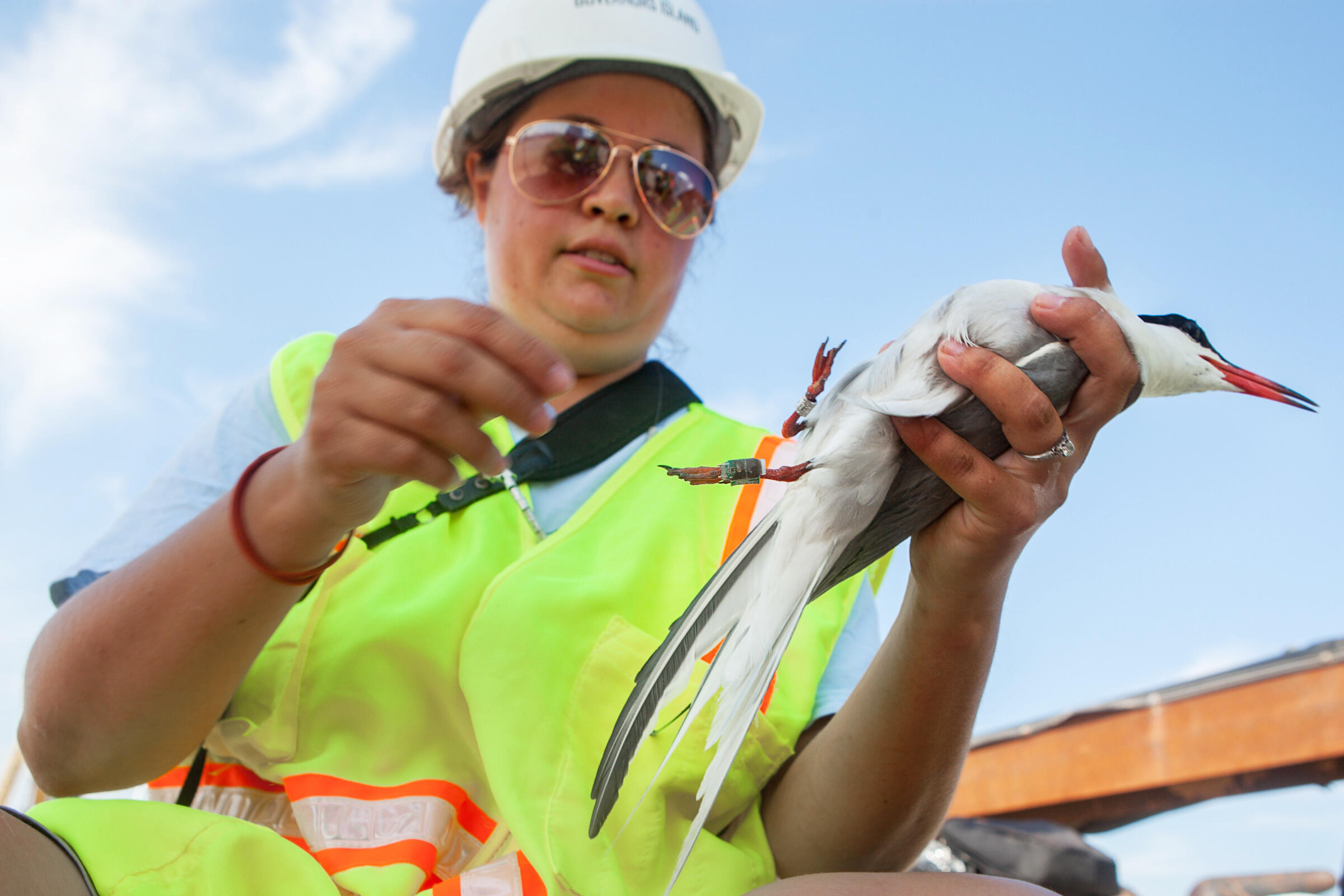 On a Sunday morning in July, after banding nine chicks, ranging from three-day-old fluff balls to three-week-old sass balls, Craig captures two adults in traps and outfits them with tiny geolocators. Unlike satellite transmitters, geolocators must be recovered to access the data they collect. If either of these terns shows up on the piers again, Craig and her team will be able to determine their migration route, where they spend the winter, and even a bit about their daily foraging behavior.

Meanwhile, Elbin, Craig, and others hope to turn the Governors Island birds into ambassadors for Gotham’s surprising biodiversity. (The city is home to some 300 bird species, as well as to coyotes, deer, sharks, and harbor seals.) To that end, New York City Audubon and other local conservation groups host their second annual tern festival after Sunday’s banding session (aptly named the 'It's Your Tern Festival 2015!). “The opportunity to bring New Yorkers so close to a Common Tern colony is irresistible,” says Elbin, who has swapped her T-shirt and khakis for a homemade Common Tern costume. “It’s better than a soap opera” in terms of drama, she adds: lots of fighting plus the occasional extra-pair copulation.

In addition to music, art projects, nature tours, and a scavenger hunt, New York City Audubon sets up spotting scopes next to the fenced-off portion of Yankee Pier. A couple dozen people line up to look at the terns, ignoring for a moment both the mid-90s heat and the stunning views of Manhattan, Brooklyn, Jersey City, Staten Island, and the Statue of Liberty. Macy Lao, a digital producer from Brooklyn, watches an adult tern ignore the incessant begging cries of its young. “It’s kind of like a parent at the mall leaving their kid to have a tantrum,” she says. “These are the things that you wouldn’t expect in New York, but that are still part of New York.” 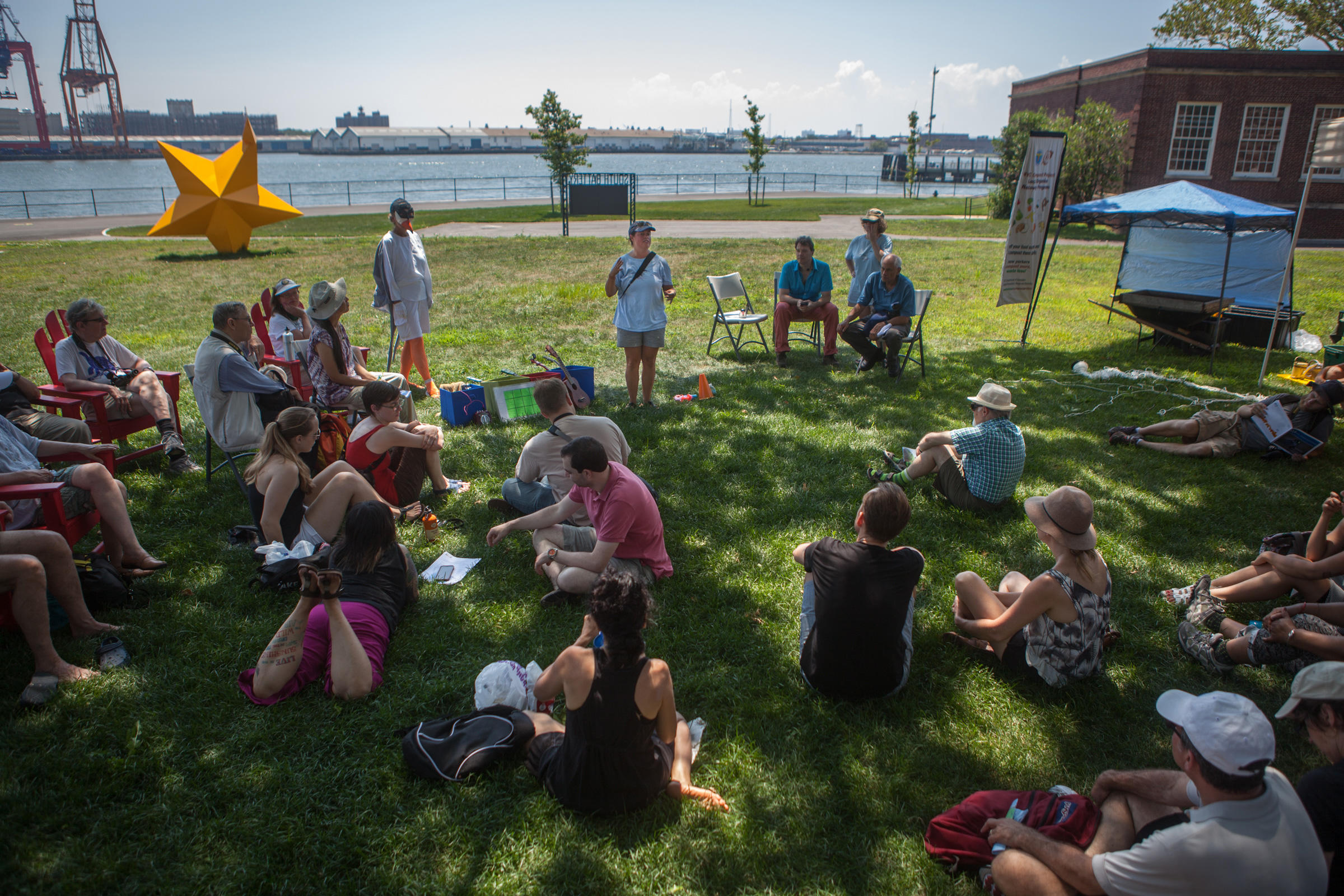 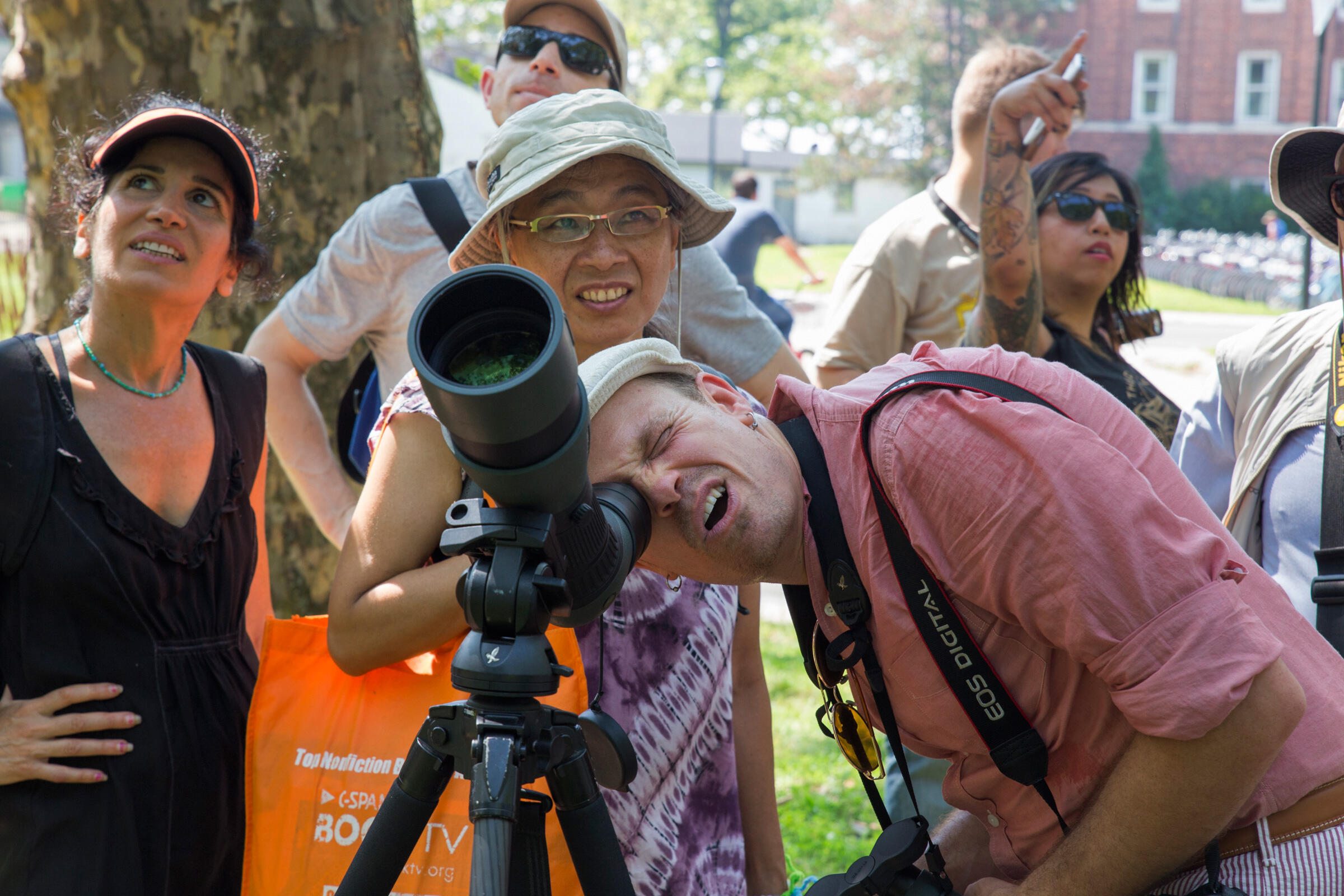