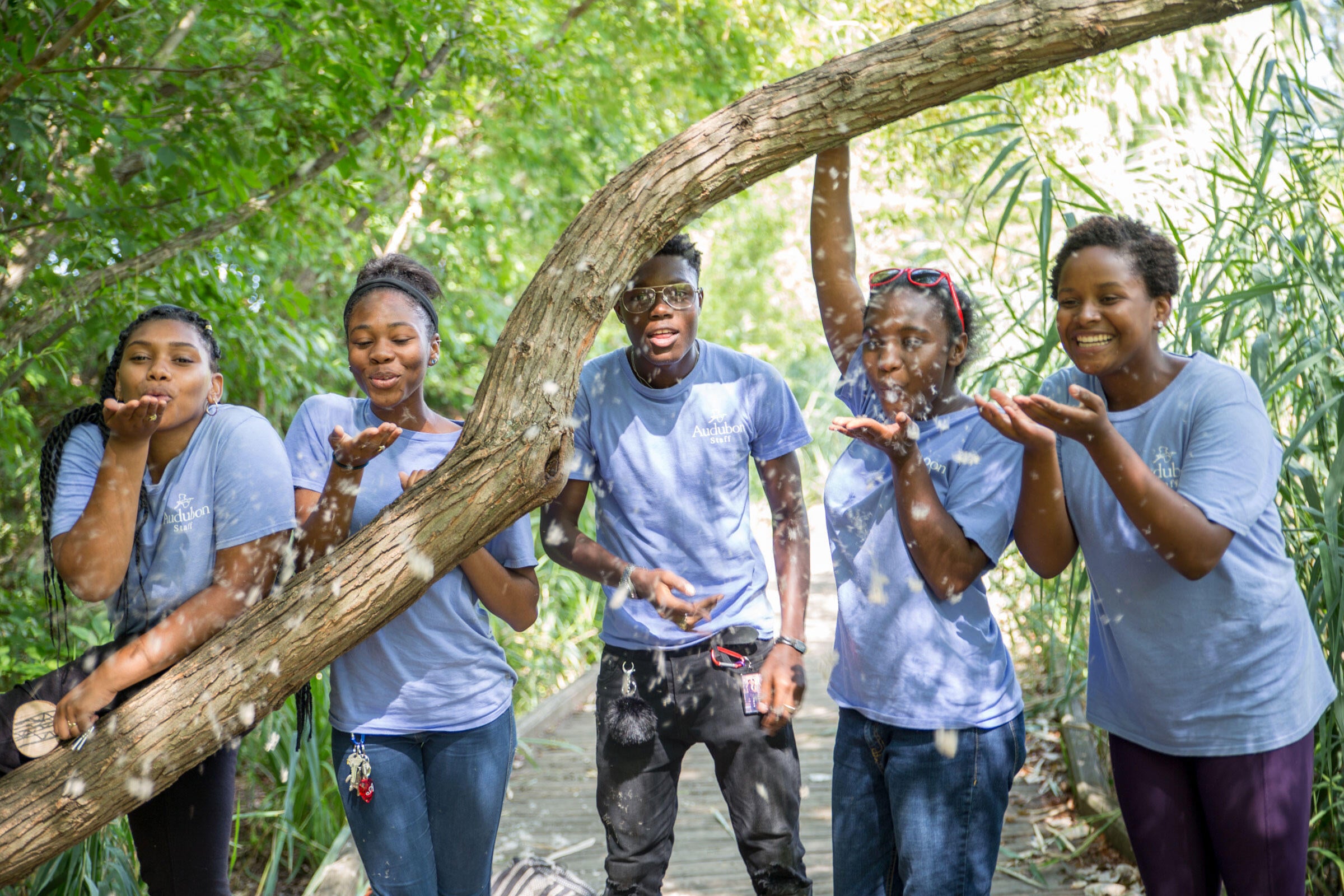 It Takes the World to Save the Planet

Audubon and the Fund II Foundation tap excellence in diverse communities now, to help build for the future.

At Audubon, diversity and inclusion is not only a best practice for business, it’s a strategic imperative. This stems from the organization’s leaders, who believe that the experiences, perspectives, and values of diverse individuals and communities enrich and strengthen the entire conservation movement, and protecting and conserving nature and the environment transcends political, cultural and social boundaries. To help build a sustainable conservation movement for all people and communities in the U.S., Audubon worked with the Fund II Foundation to create and expand programs that trained 34 young adults, primarily from African-American, Hispanic, and Latino backgrounds, for careers in nature education, conservation, community engagement, and science. The Fund II Foundation fellowship started in the summer of 2016 as a tactic to lead young adults from a variety of socioeconomic backgrounds to conservation-related careers and share the wonders of nature with urban communities. But it also helped them to develop the skills that will serve them well for the future, no matter where it may take them.

For many, the idea of helping others in need comes in the form of charity drives or social work. 30-year-old Marcus Cole, a Fund II Foundation fellow at Trinity River Nature Center in Dallas, Texas, found out that there are other ways to positively affect people’s lives. “I’ve always wanted to do something that I felt like I was contributing or helping people,” said Cole. “When I used to hear that, I would think of a doctor or a nurse, but you don’t need to do open heart surgery in order to change or save someone’s life.” Across Texas, Fund II Foundation fellows lead nature and discovery programs and participate in community activities in Dallas, Cedar Hill, San Antonio, Brownsville, and Galveston. These programs provide opportunities for school kids who live in highly urbanized environments to interact with nature and learn about their environment. “It is something that can really change the perspective of a child,” explained Cole. “When you bring in a snake, they get to learn things they would never have gotten to learn otherwise.” After hearing the stories from their children’s adventures, families often return to visit the Audubon centers around Texas (which include Dogwood Canyon in Cedar Hill and Mitchell Lake Audubon Center in San Antonio, in addition to Trinity River). For Cole, this experience has led him to discover that an environment like Audubon is a good fit for him. “I didn’t know these types of opportunities existed before Audubon,” said Cole. “Now that I’ve been introduced, I can see the doors are opening.”

Making Space for Everyone

While the initial intentions of the Fund II Foundation fellowship were to lead young adults towards careers in conservation or environmental organizations, some participating fellows have chosen different career routes, but still found that they can play a part in the conservation movement. In Maryland, 25-year-old Fund II Foundation fellow Mongar Pratt has his mind set on being a social worker, but found a new appreciation for nature in addition to hands-on experiences that will help him in the future. “I work alongside people of different ethnicities,” says Pratt. “This is vital to my education as a social worker because it enables me to experience different cultures.” During the program in Baltimore with Patterson Park Audubon Center, Fund II Foundation fellows educate and bring outdoor experiences to inner-city children that have experienced poverty and, in some cases, homelessness. These enrichment activities allow the kids to learn about nature and the environmental issues that their communities are facing in fun and creative ways. The fellows lead colorful activities like dressing the kids up as butterflies to learn about the insect. They also bring the activities to the schools that the kids attend by writing advocacy slogans around storm drains in English and Spanish, like “Trash on Our Street Today Pollutes the Waters of Our Bay.”  “I’ve learned so much from this program,” says Pratt, who grew up in Germantown, Maryland and learned Spanish in grade school and college. “Due to working with a diverse group I’ve been able to communicate with the kids in Spanish, which is nothing short of awesome!”

Sometimes preparing for the future results in gains for the present—particularly in school. In Connecticut, 18-year-old Talisha Ortiz saw an improvement in her studies while she participated in the fellowship. “From working with Audubon, I [became more comfortable] in presenting myself, and it showed in school,” says Ortiz. The main focus for the fellows in Connecticut was to advance a schoolyard habitat program that brings native plants and birds into urban schoolyards, which allows children from highly urbanized environments to experience and learn about nature. So far, the fellows have supported the Schoolyard Habitat program in 17 schools throughout Greenwich, Stamford, and New Haven by creating gardens in and around the schoolyards. These gardens are used to help the school kids increase their knowledge about ecology while creating a green space to be use by insects and birds. Though Ortiz is studying to become a nurse, she realizes that she can still play a part in the conservation movement. “When the fellowship was introduced to me I was very excited,” said Ortiz, “I’ve always enjoyed the subjects of wildlife and conservation, and how there are ways that everyone can get involved.”

The Fund II Foundation fellows in Chicago play a very important role within their own communities. As part of the program, Fund II Foundation fellows drive an initiative to engage the south side’s predominantly African-American population. The fellows learned how to market the green space-focused initiative to the local community to get them excited about the project, and delved into many of the environmental justice issues of Chicago’s south side. To do so, the fellows investigated the history and ecology of Jackson Park to understand of what they were promoting. They also surveyed 40 people who had gone to outdoor events in the park to gain a sense of what they liked about it, and interviewed five peers each to get a wider sense of assets and barriers for engaging people of color around the park in parks and nature in general. The fellows also help manage land around the forest preserves of Cook County and led activities around Jackson Park and Indian Ridge Marsh. Fund II Foundation fellow Abrianna Carter, 20, decided to learn more about the tranquil wooded islands in Jackson Park. As part of the training, Carter says she learned that more than 200 species of animals migrate through Jackson Park, and that the park serves as an urban sanctuary for people who live in the areas as well. “I hope to open the eyes of people that are my age so they actually enjoy the beauty of nature,” says Carter.

She also says the fellowship has given her more career opportunities, and while she’s still focused on being a dermatologist, she realizes that she has options if her intended career “doesn’t go as planned.”

For some fellows, conservation work is a great way to earn a paycheck. To bring the Fund II Foundation fellowship to California, Audubon partnered with the Los Angeles Conservation Corps, the nation’s largest urban conservation corps that connects young adults with jobs in various conservation projects. Fellows helped restore the native plants and habitat in Ernest E. Debs Regional Park so that it will remain a haven for the local community. To help cultivate more plants for the park, the fellows collected seeds from local plants, like black sage, and germinated them at the native plant garden at the Audubon Center at Debs Park. These plants will be used to replant the hillsides around the park. This partnership created a unique learning experience for these fellows, and what started out as merely a job to some turned into a love for nature. “I didn’t know there was so much nature in the city and now I know that, it’s important to take care of it,” says 23-year-old Miguel Cruz. By planting native plants and learning about the nature that exists within their urban communities, the fellows are able to take pride in their hard work. “I am seeing how the work that we’re putting in here is making a difference,” says Cruz, “We are contributing to making Debs Park a better place—the plants and the birds and the people all benefit from that.”

Notes from the Author

My name is Harmony Hamilton, and for the past four and a half months I have been reporting on these amazing fellows. Like some of the fellows, I did not start off with the mindset of having an environmental-based profession: I graduated from Nicholls State University in 2015 with a degree in broadcast journalism. Once I graduated, I found that traditional journalism was not the right fit for me. It was not the exciting, passion-filled creative field that I thought it would be.

My journey with Audubon began in June 2016 as a Walker Communications fellow where I worked closely with Audubon Louisiana’s communications team creating videos and articles for Audubon Louisiana. While working as a Walker fellow, I noticed that the Audubon flare was beginning to rub off on me when I spotted a Great Egret in a pond near my home. I actually called it a Great Egret instead of “a white bird.” When I transitioned to a Fund II Foundation fellow in mid-August, I further realized that I had developed a passion for environmental advocacy.

When I started the task of interviewing and meeting the other Fund II Foundation fellows, I had no idea that I would have so much in common with all of them. None of us knew that environmental organizations like Audubon had a place for young diverse talent. We did not know that these types of careers existed and furthermore, we did not know that we would actually enjoy working in this type of environment. By reaching out to the next generation of conservation leaders, Audubon is acting as a guiding star for this flock of fellows. It is true when they say, “Where birds thrive people prosper.”