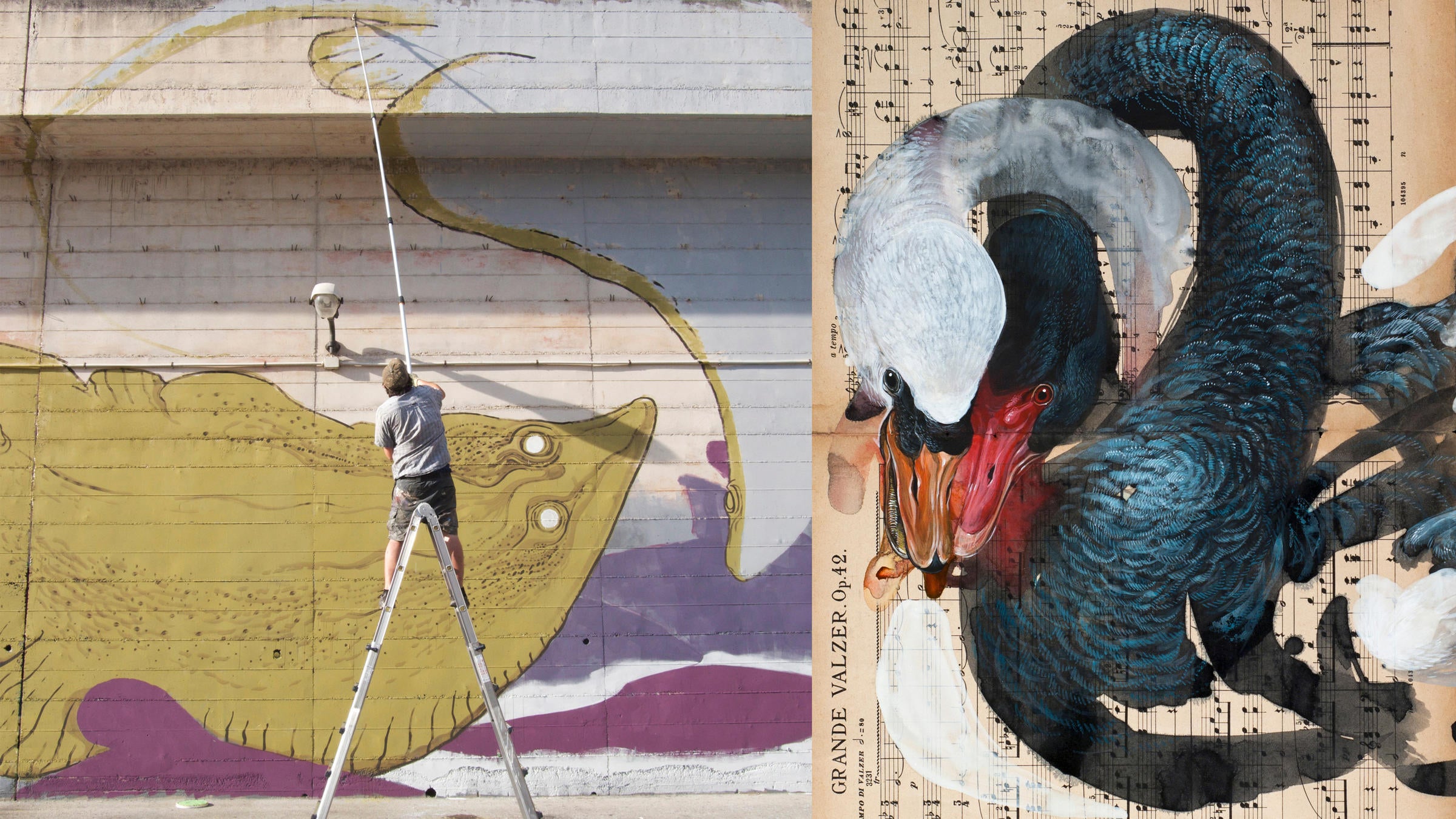 In the first decades of the 19th century, renowned ornithologist and painter John James Audubon traveled across much of the United States, capturing the beauty of the then-wild country’s birds with pencil and brush. The result was his masterpiece, the 435-plate Birds of America.

This summer an Italian street artist named Hitnes will retrace Audubon’s adventures, hitting 15 states, from Florida to Louisiana and up through Pennsylvania and Ohio. As he goes he will create large-scale murals of the birds he sees—most of which will be species recorded by Audubon—for his newest project, The Image Hunter.

The expedition will touch almost every southern target of Audubon’s birding pursuits, which stretched over many years. Thanks to modern transportation options (Audubon traveled by foot, horse, and boat) Hitnes’s expedition will take considerably less time—approximately three months, starting on July 27. He’ll be joined by videographer Giacomo Agnetti, who will gather footage for a documentary of the venture, to be released in 2017.

Hitnes, who was born in 1982, grew up in a family of scientists, which no doubt accounts for an early interest in biology and the natural world. But art—“from cave paintings to scientific illustrations, from the art of Paracas to Ernst Haeckel, from Inuit masks to Rembrandt,” he says—is where he found his true inspiration.

By 1996 Hitnes had established himself as a street artist, and he has since traveled the world for his art. He came up with the idea for The Image Hunter two years ago, after encountering Audubon’s original watercolors at the New-York Historical Society. There, a map depicting the naturalist’s excursions immediately jumped out at him, beckoning him to strike out on a similar mission.

“It was very inspirational,” he says. “[The idea came] very quickly, just like that, and I said, ‘Okay: United States, Hitnes, and Audubon.’ ”

In preparation for his voyage, Hitnes has been in contact with various Audubon centers to get a sense of what birds he can expect to find and to gain permission to paint in certain Audubon sanctuaries, including the Pickering Creek Audubon Center on Maryland’s Eastern Shore. He will also be making his mark in several major cities, and when his bird hunt ends in late October, he’ll come to New York City to do a painting for the Audubon Mural Project.

Like Audubon, Hitnes will find his inspiration in nature, but unlike Audubon, he’ll capture his elusive winged subjects with camera and sketchbook, rather than hunting them. “I will go into the forests and look for birds, exactly like Audubon did,” says Hitnes. “Of course, I won’t shoot these birds—times have changed—but the lenses of my camera will be a useful ‘rifle’ to catch the birds.”

Though he doesn’t describe himself as a hard-core birder, Hitnes is no stranger to the avian world. He’s already produced dozens of bird murals in Europe, New Zealand, Australia, and China. Earlier this year, he completed a six-wall display in the San Basilio neighborhood of Rome, featuring a blackbird, a peacock, a duck, and a heron, as well as parrots and gulls.

While Hitnes has always based his work on real subjects, the end result has typically been reimagined. “I paint animals, but I don’t have a book or anything like that in front of me; I do it by heart,” he says. “Now I am chained to what I am going to see.” To stay true to Audubon’s meticulous style, Hitnes will alter his usual technique in order to achieve a realistic portrayal of the birds and accurately capture their proportions and details. “I hope bird experts will not get mad at me,” he adds.

Depending on the size and availability of wall space, Hitnes will paint one to six murals in every location, each focusing on a specific bird. In addition to studying the biology of the birds, Hitnes is also interested in exploring the connection between the artist and the artist’s inspiration.

“How did Audubon spend almost his entire life following this crazy obsession with birds?” he says. As he ventures into wildlife sanctuaries, swamps, and forests, Hitnes will look for answers to this question by analyzing how nature can serve as an artist’s muse.

Communion with nature shouldn’t be hard—Hitnes will be roughing it for a majority of the excursion. Even though various Audubon chapters will be hosting Hitnes and his cameraman, it is likely that some evenings will be spent on his own.

“The car is big,” Hitnes says with a chuckle. “I’ll just say that.”

We'll provide updates as Hitnes travels through the U.S. Here's his tentative schedule: