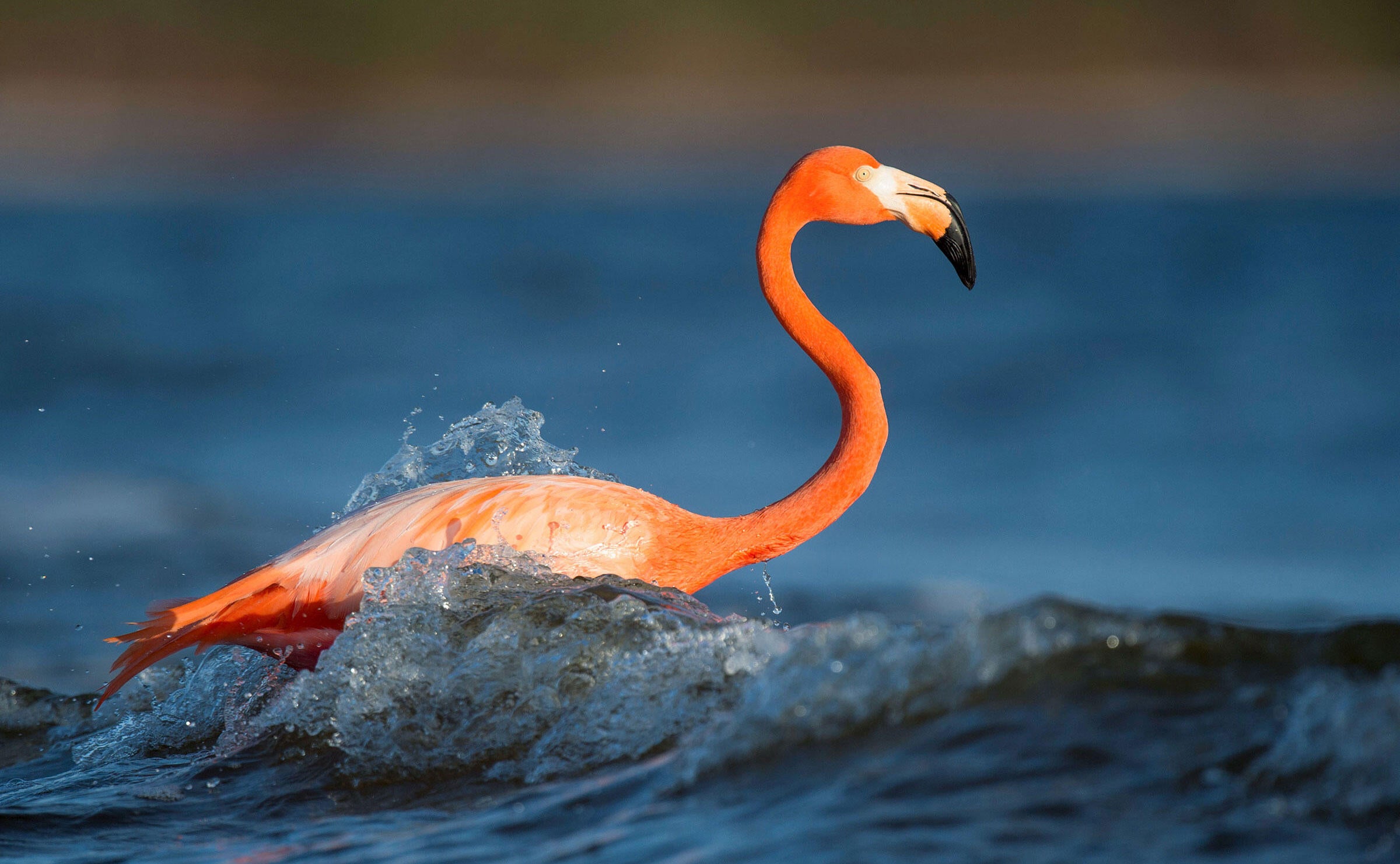 An American Flamingo in its very natural element in Florida. Photo: Raymond Hennessy/Alamy

American Flamingos aren’t hard to find in Florida. Buy a lotto ticket and you’ve got one on the logo. Tune in to a Miami Vice rerun in your Flamingo Motel room and, boom, flamingos, right there in the opening credits.

Cultural cachet aside, finding a bona fide flamingo in the Sunshine State was a rare treat for most of the 20th century after hunters and poachers decimated the population. Over the past few decades, though, the gangly pink waders have been spotted more frequently—and in bigger groups. That, in turn, has cranked up the heat on a long-simmering debate among ornithologists: Some say Florida’s flamingos all escaped from captivity, while others contend that they’re natives that were nearly wiped out by hunters in the 1800s.

The question isn’t merely academic; it determines the bird's conservation. On the one hand, the state Fish and Wildlife Conservation Commission regards flamingos as non-native (a spokesman told the Miami Herald that the designation is being changed for some areas). Although the species is still granted protection under the Migratory Bird Treaty Act, being deemed native means it would benefit from other special management attention.

But as Steven Whitfield, a conservation and research specialist from Zoo Miami, points out, there was no data to back up the non-native versus native argument. So, to find some answers, Whitfield and colleagues scoured historical records, museum collections, and community science tallies for all mentions of American Flamingos Their conclusion, reported this week in The Condor: Ornithological Applications, is that the species probably originated and nested in Florida until the turn of the last century, and is finally on the upswing again.

The findings were a revelation for Jerry Lorenz, director of research for Audubon Florida and one of the paper’s co-authors. “Slowly but surely, I too became convinced that flamingos are native birds that were hunted to near-extinction and are now recovering,” Lorenz says. “I think it’s excellent news. It’s fun when you get turned on your head.”

Settling a decades-long dispute is no breeze, however. The team had to search through digitized museum archives to track down four eggs that, according to their labels, came from flamingos nesting in Florida in the 19th century. They found further evidence for sizable colonies in early naturalists’ notes, including several accounts describing large flamingo flocks numbering from several hundred to the low thousands. (Among the observers was John James Audubon, who waxed poetic about the birds he spotted near Indian Key in 1832. “Ah! reader, could you but know the emotions that then agitated my breast!” he wrote.) Notably, most of the accounts touched on hunting or the plume trade, with one detailing how 100 flamingos were killed in a single day. After 1902, there would be no more records of large flocks in Florida for another century.

The researchers then turned to the Audubon Christmas Bird Count, eBird, and other sources for modern data. In the 1950s and 1960s, the records they gathered showed most sightings were of single birds or pairs. But from the early 1970s on, most reports noted two or more individuals; the record high was 147 flamingos seen at a water treatment facility in the Everglades in 2014. The overall number of sightings also grew significantly, though the researchers note that could be due to Florida’s growing human population and an increased interest in birding.

Taken together, the overall numbers of flamingos are too high to be explained by captive individuals that escaped.

Taken together, the overall numbers of flamingos are too high to be explained by captive individuals that escaped. There have been some recent flamingo escapees from the Hialeah Park Race Track, for example, where the birds were imported as tourist attractions beginning in the 1930s, but there just aren't enough to account for all the sightings, the scientists say. Pair that with the archived eggs from Florida, and the jail-break theory starts to look thin.

Flamingo populations aren't expanding in Florida alone. Whitfield and Lorenz also found direct evidence of birds venturing over from flocks in the Caribbean, including two flamingos that were banded in Yucatán, Mexico, and later seen in Everglades National Park. These visitors reflect successful conservation efforts in the Caribbean, the study notes; the Yucatán population, for example, swelled from about 6,000 to 27,000 between 1954 and 1998. Florida, for its part, is also looking more flamingo-friendly these days, thanks to recovered and protected habitat in Everglades National Park and other South Florida refuges. The work isn't done, though. Audubon Florida's scientists believe that continued conservation and restoration of the Everglades is the key to flamingo recovery.

Now, the researchers want to use satellite transmitters and genetic tools to learn more about how the birds move between Caribbean colonies and Florida’s coastal flats. Those findings—when paired with monitoring—may yield better protection for flamingos. But first, Whitfield says, wildlife managers need to recognize that the birds are part of Florida’s ecosystem, and are not just kitschy symbols of the state’s beachy brand.