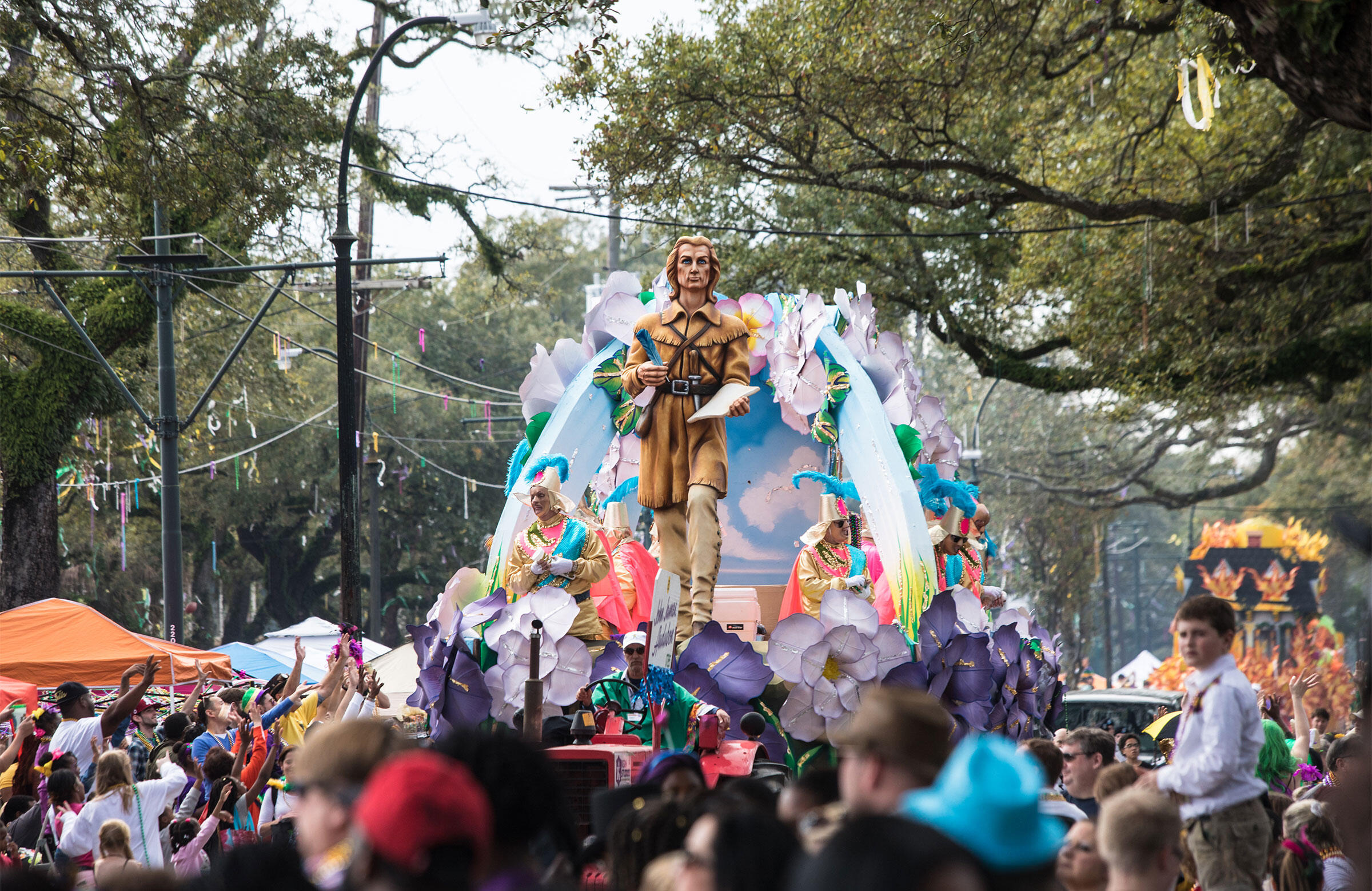 John James Audubon strides above the crowd on a float, one of 27 in this year's Rex Parade at Mardi Gras. Photo: Julie Dermansky

The Rex parade, New Orleans’ oldest Mardi Gras parade, featured the naturalist in a celebration of the city’s history.

The families begin gathering at sunrise, lining the ancient avenues of New Orleans with barbecues, radios, and tents. Soon, the revelers appear, ready to keep the party going under the city’s historic oaks. And then the floats arrive—colorful, ornately decorated barges pulled by tractors and trucks as the crowds reach out for beads tossed by the costumed men aboard. As it has been for more than 100 years, this was the scene this past Tuesday as the crowd gathered to see the Rex Parade, New Orleans’ oldest Mardi Gras parade.

If the celebration seemed rowdier than usual, there was good reason: This year’s Mardi Gras celebrated the 300th anniversary of the founding of New Orleans. The Rex Parade—led by the Rex Organization, a fraternal Mardi Gras krewe—was just one of the 33 parades that took place across the city during the month-long celebration. But while every parade featured elaborate designs and decorations, Rex had a float no other parade could match: one helmed by the likeness of John James Audubon.

Standing tall atop one of the parade’s 27 floats, his likeness was regal. Striding above the crowd, dressed in a frontiersman’s traditional leather garb with a knife tucked into his belt, he held a quill in one hand and a piece of fresh parchment in the other. The figure, which was based on a popular statue of the naturalist in Audubon Park, was surrounded by dozens of magnolias and azaleas in shades of purple. He stood before a painted blue sky and a wild landscape, as it was 200 years ago when he first visited Louisiana. Ringing the base of the float were artistic representations of birds, including a Tricolored Heron and Mallard. Meanwhile, the rear of the vessel hosted a giant sculpted pelican.

For Christy Brown, a prominent member of the Rex Organization (he was their King of Carnival in 2015) and a board member of Audubon Louisiana and the National Audubon Society, the John James Audubon cameo was a perfect fit for this year’s parade. Brown helped to develop this year’s theme, which celebrated the first 100 years of New Orleans’ history, and the renowned naturalist immediately came to mind, he says. Although Audubon was born in Haiti, he spent most of his life in the U.S., and Louisiana counts him as a former resident. While in the state he completed many of the works for his seminal guide Birds of America.

“He made New Orleans and Louisiana his home for so long,” Brown says. “He captured much of the rich life that we have in New Orleans . . . and that to us was an important representation of those first [hundred] years.”

In fact, all of the birds on the base of the float were based on drawings Audubon did himself, says Manuel Ponce, the artist who designed the float. “I chose the birds for the float design mostly because they are indigenous and also they are popular Audubon illustrations,” he says.  Once Ponce picked out the works he wanted to feature, he re-drew them to scale to fit on the float’s side. Another team of artists carved the pelican and Audubon from foam, which they then painted with rich and vibrant colors. 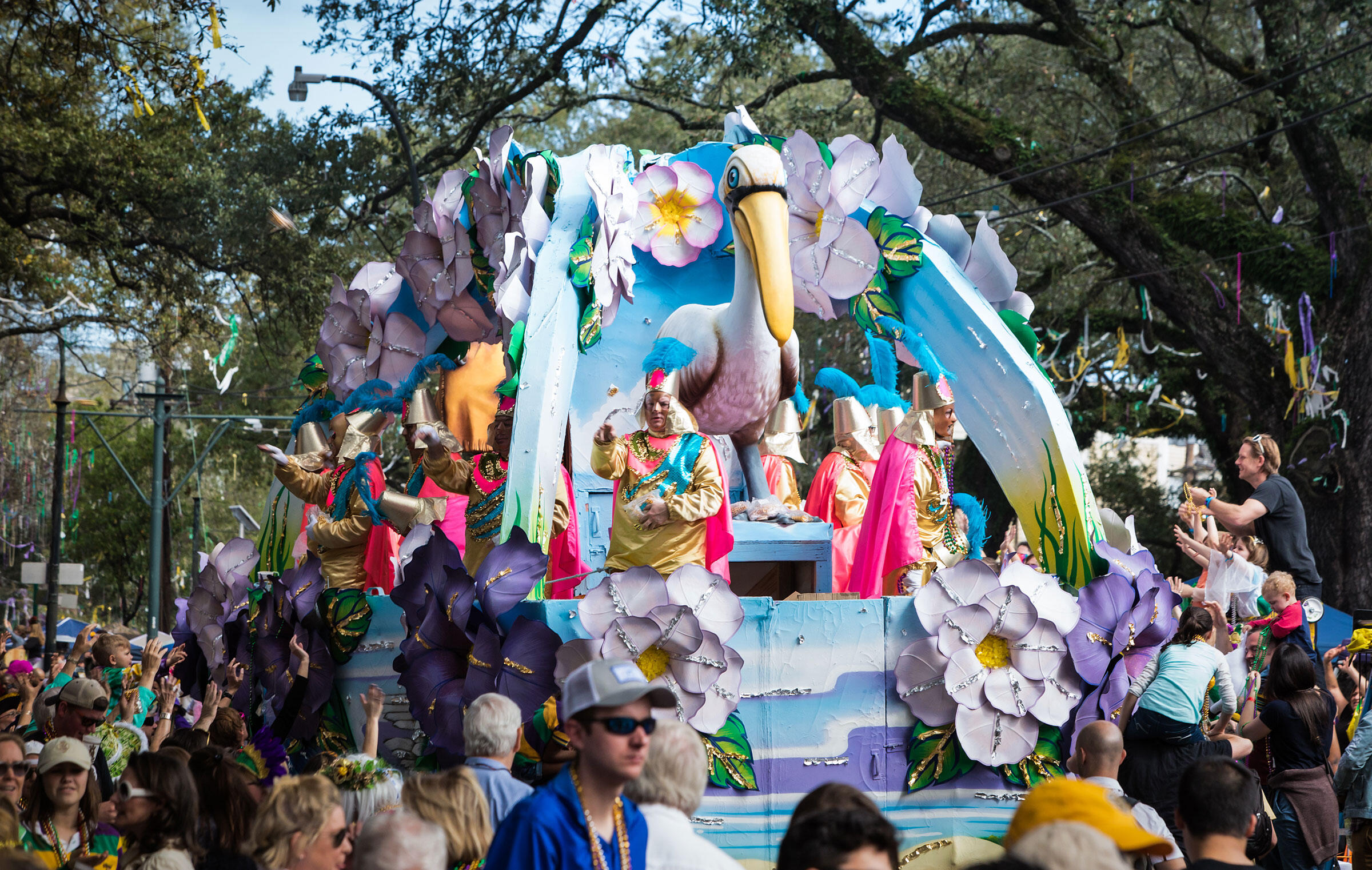 A pelican sculpted from foam gazes out from the back of the John James Audubon float. Photo: Julie Dermansky

While some aspects of the Rex parade change each year—20 of the floats are redesigned to match the yearly theme—many parts of the Rex Organization's Mardi Gras traditions have remained the same since the group’s founding in 1872. The day of the parade always begins with a special breakfast for Rex members. Then, the men change into their costumes, which are individually designed and sewn by a local artist to match each float. (There are 27 total, seven of which stay the same every year to feature historical Mardi Gras symbol and themes. The first float always features that year’s King of Carnival.) Most costumes feature the traditional Mardi Gras colors of purple, green, and gold, as well as a feather-adorned hat.

For the 20 new floats, Brown says work and preparation for the next year's parade typically begins shortly after Ash Wednesday, the day after Mardi Gras officially ends. A team of around 15 artists remove the decorations, paint the wooden bases of the white, and then begin the laborious process of creating the new floats to match the next year's theme, which can be decided up to five years in advance.

Despite Mardi Gras’ more tawdry associations, Brown says that the holiday and the Rex parade is about family and tradition. “When I think of Mardi Gras, I think of really the sights, sounds, and smells of going riding in a parade down St. Charles Avenue,” he says. “You see multiple generations of family gathering in the same spot that their family has always gathered in. I mean black, white, rich, poor—in true New Orleans tradition, it's a melee of different people.”

48 Hours of Birding (and Other Things): New Orleans

Laid-back birding in this urban gem gives "The Big Easy" a new meaning.

Birds of Louisiana’s Coast: A Landscape of Vital Habitats

A diversity of species, particularly birds, has evolved to depend on specific habitat characteristics within this diverse coastal Louisiana landscape.