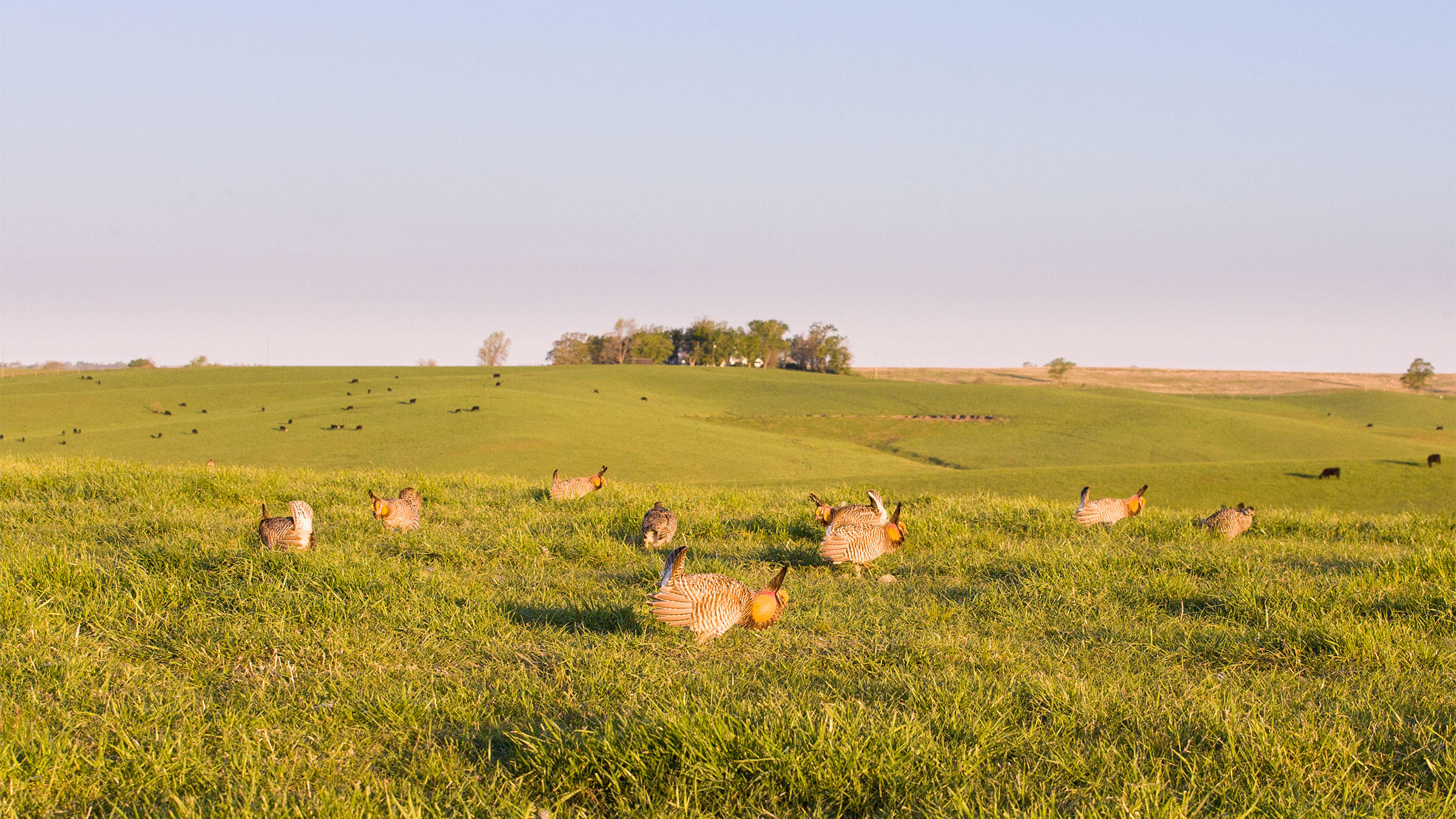 Learn to Photograph Leks From an Expert

The springtime dance battles of grouse and other species are irresistible camera fodder. Photographer Noppadol Paothong explains how to nail your shot without disturbing the delicate mating ritual.

Each spring on American prairies, the rising sun is met by a chorus of birds—not chirping or singing, but stomping, booming, and even bubbling like a coffeemaker. The birds, species such as Greater Sage-Grouse and the Sharp-Tailed Grouse, are taking part in a lek, an intricate dance battle that determines which few lucky males get to mate.

The phenomenon is a tempting target for photographers like Noppadol Paothong, who has been visiting leks for 16 years and whose book, Save the Last Dance, documents the leks of six grouse species. “They’re so determined to be there and be performing,” he says. “I think that’s what draws me back to them, their tenacious spirit.”

For grouse, the annual spring leks are their only chance to mate, so it’s no surprise they’re focused on making an impression. The groups that form at leks let the birds, which usually wander on their own across the sagebrush-dotted landscape, come face-to-face with potential mates. The females are in charge: Their sharp eyes take in each detail of a male’s trademark bellowing and flapping, then they decide whether to honor the male with a mating invitation.

Lek photography isn’t for the casual hobbyist. Asked about his most important piece of equipment, Paothong laughs. “A warm jacket!” Photographers must be extra careful not to flush a lekking grouse—startled birds may not return for the rest of the day and mating season doesn't last long. That means arriving well before dawn and staying in a blind until after the last bird leaves. Temperatures can stay below freezing, sometimes with snow falling.

If you’re looking to photograph a lek for the first time, Paothong recommends starting with Greater Prairie Chickens, which are less skittish than other grouse. They’re so preoccupied with trying to impress the female that they forget all about you, he says. He’s had good experiences visiting the Missouri Department of Conservation’s blind at Dunn Ranch and attending the Nebraska Prairie Chicken Festival held early each April.

Whichever bird you’re looking for, preparation is key: Paothong arrives a day or two early to take a look around. He scopes out popular dance floors by seeing which areas have the most droppings. He also recommends learning as much as possible about the birds and their behavior, ecology, and evolution before your trip. That knowledge sharpens your vision, he says, enabling you to keep up with the birds during their ritual and see how an individual bird fits into the scene. 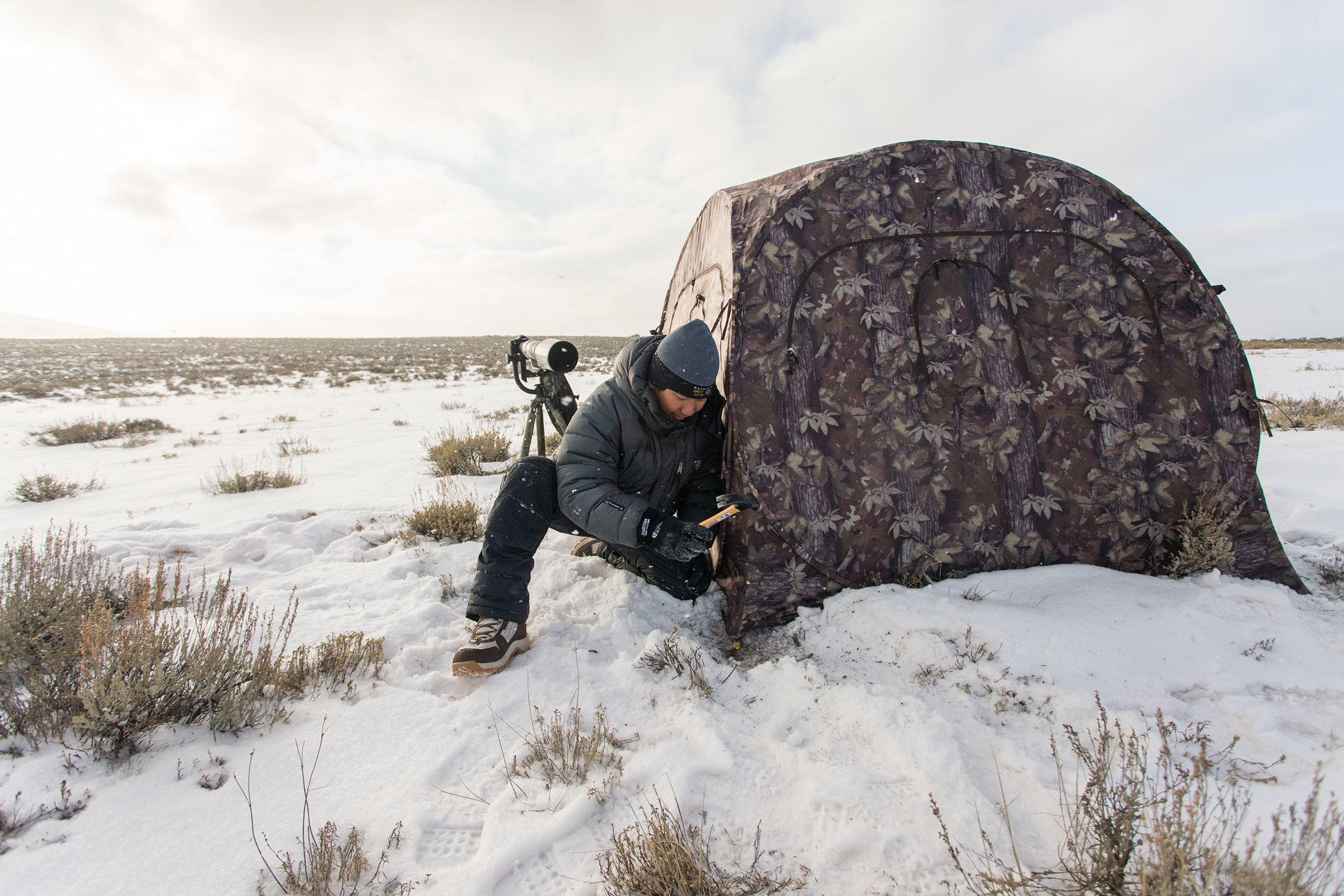 Prepare to wait patiently all day—perhaps in a blind—so you don't flush the birds and disturb their ritual. Here, Noppadol sets up his blind in Gunnison, CO. Photo: Noppadol Paothong

For Paothong, being comfortable with your camera is more important than having the latest tech. He focuses manually, never crops his photos, and only minimally corrects for brightness and contrast. “People look for perfect photos and in nature nothing is perfect, everything is chaos,” he says. It’s okay to let a little of that chaos show.

Paothong was trained as a photojournalist and spent years at the Missouri Department of Conservation, which shapes the way he thinks about photographing birds. He recommends looking for a story, not just a subject. “Think about what message you’re trying to convey,” he says. That might include conservation efforts and the history of the landscape, and so it can be helpful to put the bird in context. “Step back and look at a wide picture,” Paothong says, “because many times the habitat is as breathtaking as the birds.”

What the Heck Is a Lek? The Quirkiest Mating Party on Earth.

Consider this your guide to the mating ritual that shapes the lives of a hundred dancing, singing bird species.

Disappear in plain sight with one of these four types of camouflaged hides.