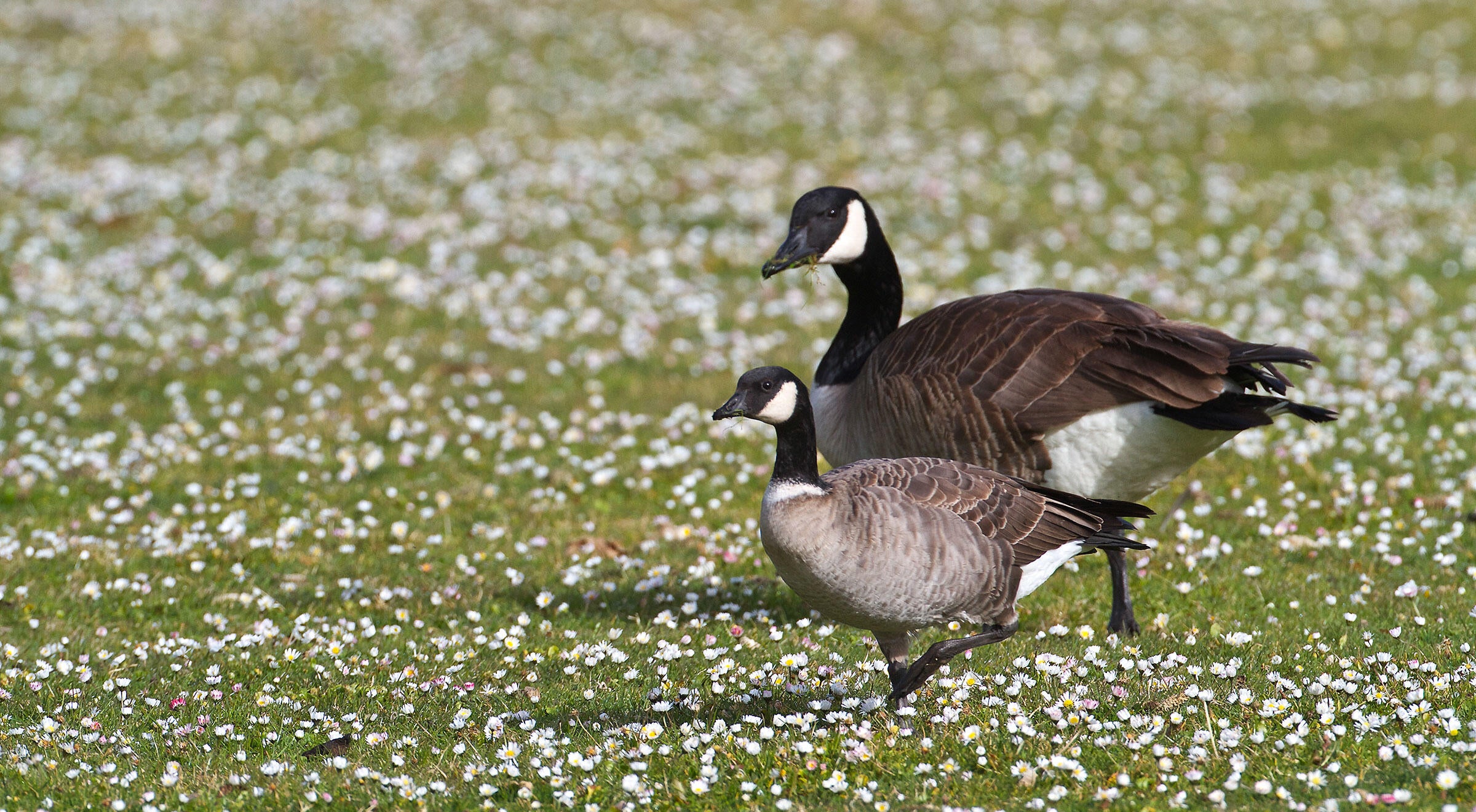 The Cackling Goose (left) might look like a Mini-Me of the Canada Goose (right), but in fact there are nuanced differences between them. Photo: Blake Matheson/Flickr CC (BY-NC 2.0)

Learn to Tell a Cackling Goose From a Canada Goose

Don’t let this ID cook your goose. Here are a few tips to help you solve the puzzle. 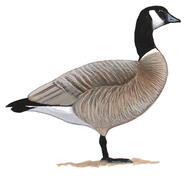 Have you ever come across a field full of geese stuffing themselves with the stubble of last year’s harvest and assumed that they were Canada Geese? They are a common species, after all, with a distinctive look: large, muddy birds with long, black necks and prominent white chinstraps and cheeks.

But before you turn your back on the flock, take a closer scan. There might be a rarer bird hiding among them: the Cackling Goose. Cackling Geese summer in northern Alaska and Canada, and many spend their winters in the Pacific states and the southern Great Plains. But every year a number show up on farms and waterways along both coasts, sometimes spending November through March in their own flocks or embedded in gangs of Canada Geese—both delighting and confounding birders who seek them out.

It’s easy to see why. When it comes to North American geese, distinguishing Cackling from Canada is perhaps the most challenging ID. The two birds are virtually identical—so much so that until 2004, they were considered one species: Branta canadensis. Now, due mainly to genetic differences, the Cackling Goose is formally on its own, with four regional subspecies under its wing.

A few visible features separate the two species, too. Cacklings are small; some are barely larger than a Mallard. In contrast, the largest Canada Goose can weigh twice as much as a Cackling Goose. But size varies, and some smaller Canada Geese (females and immature birds especially) can stay nearly as compact as their estranged counterparts. Still, size is a good first indicator—any mini goose warrants further investigation.

Yet you shouldn't just rely on observing Cackling Geese next to Canada Geese to make your ID, in case you see the two species apart. Click around the photos below to study up on other general field marks that might help you pick out a Cackling Goose from the rest of the gaggle. 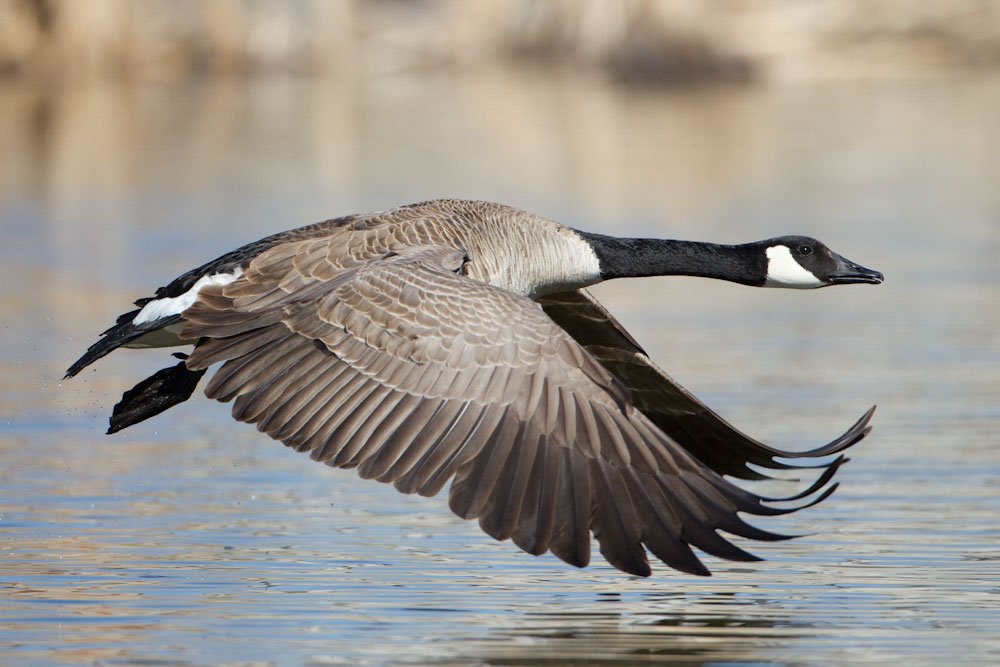 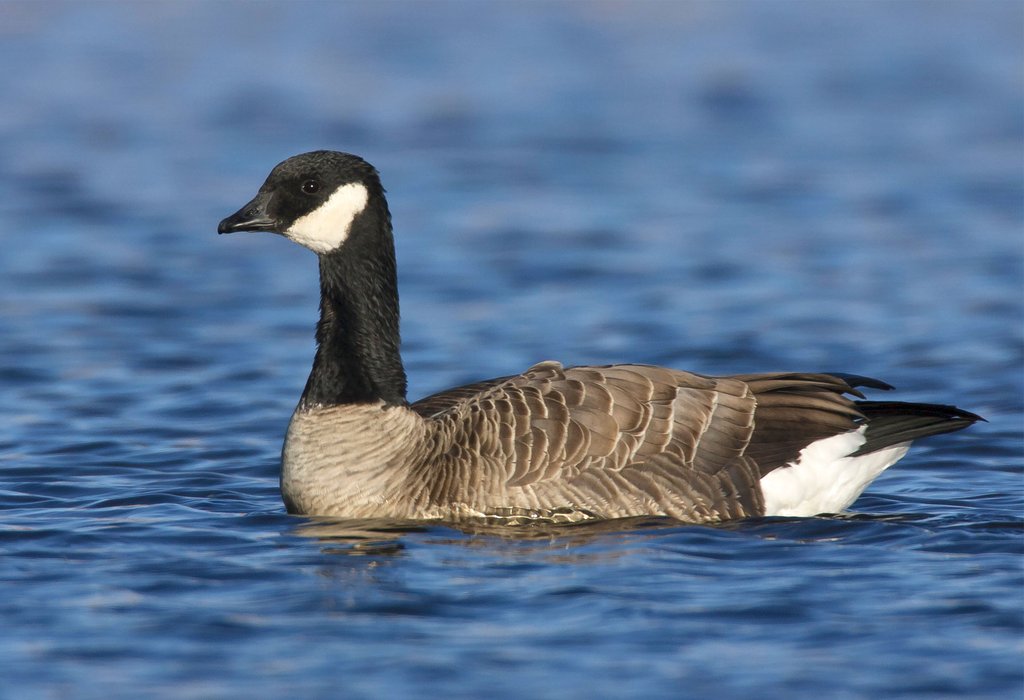 Not every Cackling Goose will have all these features—the species can show a lot of variation. For example, the Ridgway's Goose, a Cackling subspecies found mainly in western Oregon during winter, has a peaked head that's similar to that of a Canada Goose. There's also a long lineup of Canada Goose subspecies that come in various sizes, shapes, and colors. For a deeper dive into how these groups differ, check out David Sibley's analysis. One of the most helpful tips he imparts: Get to know the Canada Goose flocks in your neighborhood so that it's easy to recognize anomalies when you encounter them.

It's also important to observe the bird from different angles before making a judgement call. Neck length and thickness, for instance, can be difficult to gauge depending on what the bird is doing. Is it at rest? Feeding? Alert? These factors can all change the appearance of a goose's neck.

Lastly, to make the ID more bulletproof, you will want to listen for the bird's call. Cackling Geese lack the deep, throaty honks of Canadas, instead producing high-pitched squeaks, yips, and of course, cackles.

Birdist Rule #12: How to Misidentify a Bird With Grace and Dignity

Mistakes happen to the best of us. Here's how to save face.

Size and tail color are two of the biggest clues when deciphering these two backyard regulars.