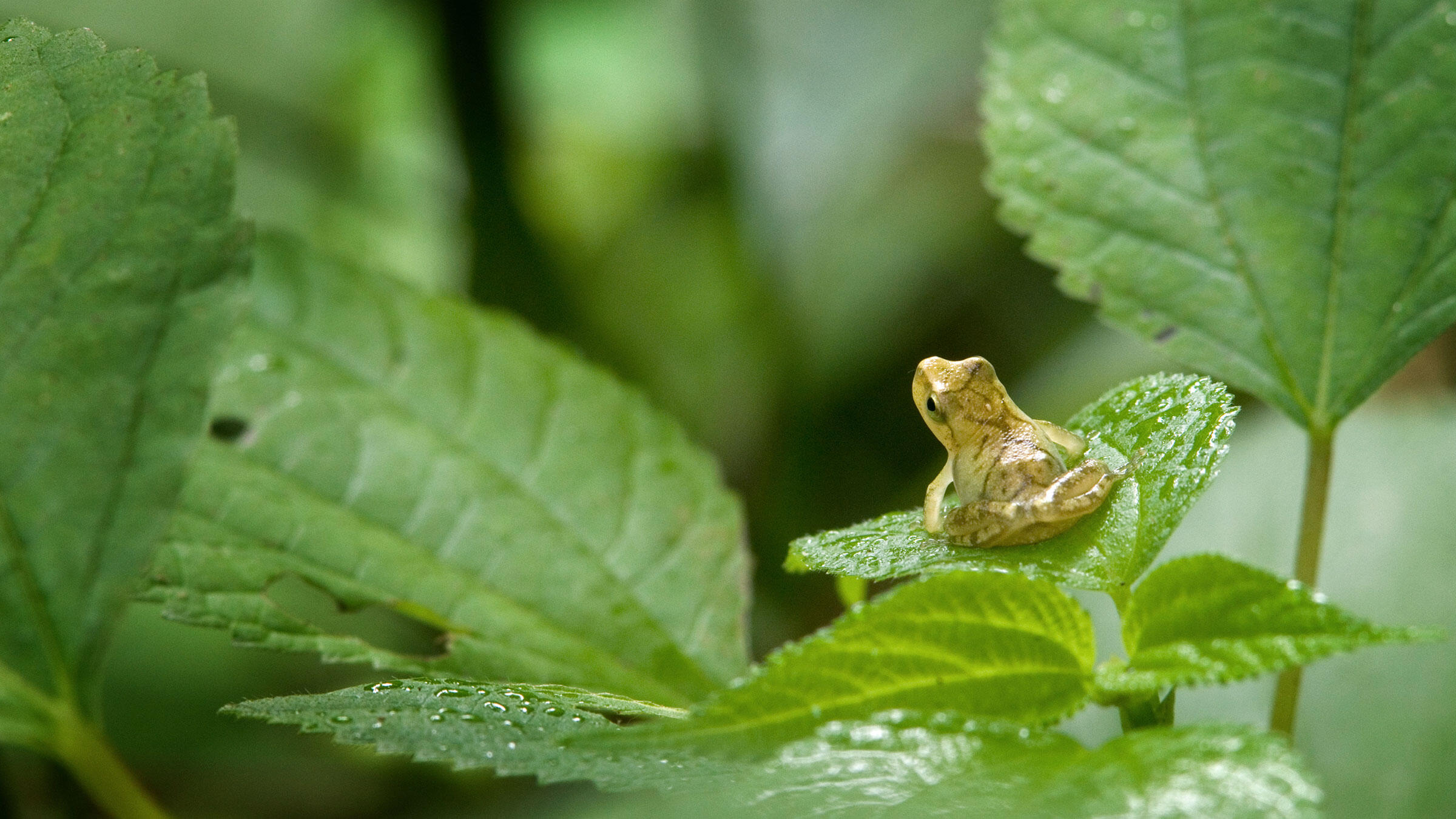 Spring peepers fill the air around ponds with their pulsing, Twilight Zone-like songs. Caution: You might want to bring some protective gear for your ears when checking these guys out. Photo: Clay Bolt/Minden Pictures

Editor’s Note: There's a lot to look forward to in spring, including the welcomed hullabaloo of birdsong. The sheer volume of songs and calls can often feel overwhelming for birders, but these sounds offer both an opportunity and a challenge. Follow along with our birding-by-ear series to learn how to better ID birds through their vocalizations. To catch up, be sure to check out part 1, part 2, part 3, part 4, part 5, part 6, and part 7.

In our final installment, baroque singer, composer, and wildlife expert Lisa Rainsong spells out the wonders of nature's lesser-known musicians: frogs, toads, mammals, and stridulating insects. Read on for her tips on where to listen for these creatures while birding. Also, make sure to turn your sound up to sample a few clips from the wild.

Has watching birds made you more aware of other winged beauties such as butterflies, moths, and dragonflies? Listening to birds can have the same effect: It opens your ears to the tunes of nature’s other musicians. This has some great benefits like helping you to tell the difference between, say, a Grasshopper Sparrow and an actual grasshopper's song, and keeping you in rhythm with the seasons—an art that's essential to birding. Frogs and toads, for instance, sing throughout the spring, with cicadas joining them in summer. As the birdsong quiets down at the end of nesting season, a chorus of crickets and katydids takes the stage. Meanwhile, mammal calls can be heard after nightfall in most any season.

As is often true with birds, you're more likely to hear insects and amphibians before you see them. Their attire can be perfectly camouflaged with plants and their environment, so spotting them is a challenge. Such disguises are essential to their survival from predators—but even then, it doesn’t always work. I’ve watched Tree Swallows swoop down and carry off leaf-mimic katydids that I hadn’t even noticed, and observed Eastern Bluebirds delivering singing insects to nest boxes.

Here are some non-birdy vocalists to keep an ear—and eye—out for.

Every habitat stars a different ensemble of singers advertising for mates. In the northern forests, the peter peter peter of a Tufted Titmouse may be accompanied by the distant sound of quacking ducks. But they're probably wood frogs congregating in a vernal pool.

Pond-side, the o-ka-leeeeee of raucous Red-winged Blackbirds may be joined by assertive spring peepers singing above the water’s surface. Peepers can project their voices as impressively as Pavarotti, yet these tiny frogs are almost impossible to locate. After dark their deafening choruses only grow louder.

On your next outing, see what pairings you notice. When American toads gather for their brief mating season in spring and early summer, which birds are singing above them? Bullfrogs are more in-your-face and omnipresent; which avians do you find in their marshy habitats? Note that weather conditions may alter the composition. The water must reach a certain temperature for frogs to call, and I’ve heard both frogs and toads sing up to a month earlier or later depending on how warm or cold it is in spring.

The amphibians in your area may be different from the ones I have in northeast Ohio, so you’ll want to narrow your choices by learning which species are in your region. Search for frog-calling surveys in your state such as Ohio Amphibians or Michigan Department of Natural Resources Audio Training.

While most mammals don’t "sing," you may hear them communicating in other ways at night. The resulting soundtrack isn’t very musical: a cacophony of deer snorts, raccoon squabbles, shrew squeaks, and flying squirrel peeps. Sometimes you can pick out bats tittering in the sky, even though echolocation is typically above human hearing range. I’ve heard them among circles of Chimney Swifts while rowing across a lake in the evening. The most enchanting sound for me, however, is the coyote’s cantor call, which cues the rest of its companions to howl in a somewhat harmonious response.

The first cicada songs of the year are a sign that the summer days are waning. Even so, I listen for them with cheerful anticipation, delighting in swamp cicadas on a warm July morning. Meanwhile, the long, soothing hymns of Linne’s cicadas underscores the Gray Catbird’s garble on a humid evening. Both of these cicadas are annual species, meaning they emerge every summer. Mass emergences are more periodic, with cycles ranging from 2 to 17 years. To learn when they may occur in your region, look online for a local brood calendar.

Most crickets and katydids also don’t sing until the second half of the year, as they need to fully mature and grow into their instruments. Males will stridulate (or rub) their wings to produce sonorous chirps. One side has a grooved file and the other has a scraper, almost like a Latin güiro.

What results is a mysterious concert, hidden under leaves and rocks, canopies and shrubs, grasses and goldenrods. You might recognize the common true katydid’s loud, raspy scrape up in the oaks.

The snowy tree cricket’s rhythmic, nocturnal chirp also stands out against the whirl of sounds.

Being a musician, I’m always determined to identify every one of these singers. I use The Songs of Insects by Lang Elliott and Wil Hershberger as my “answer key” (available for free online), going section by section to learn the crickets and katydids singing in each level of vegetation.

As you become more aware of these different animal voices, you’ll start to hear the layers, too. Soon, it won’t just be the insects, or the amphibians, or the mammals, or the birds, but a grand encore of all the soloists. And that’s when the fun really begins. I remember one full moon in August, when my ears were filled with a coyote’s howl, a Barred Owl’s hoots, and a back-up ensemble of crickets and katydids. My senses were stretched far over the landscape, and I felt very conscious and satisfied in the end. Listening to nature’s music is endlessly fascinating, but it’s also a constant reminder that we need to cherish and protect the performers and their concert halls. It’s because of them that each season has its own ethereal song.