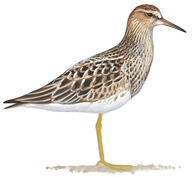 In early June, millions of birds arrive on the Arctic Coastal Plain in Alaska, from all over the world. They’re there to attract a mate and raise their young. They’ll feed on the explosion of insect life that happens in the brief spring. Nature photographer [and bird sound recordist], Gerrit Vyn, takes us there:

"So, when the shorebirds arrive, it’s an absolutely spectacular event! …as soon as they get up there, these male shorebirds of all different types begin all of these unique displays –… If you go up there on a calm, still, spring evening when the winds subside, all of these birds just lift off the ground. And the tundra can appear barren and within a few hours… you just hear thousands of birds in every direction calling and singing"

"There’s one shorebird species, the Pectoral Sandpiper, where the male has this pectoral sac at its chest that... it’ll stand on the ground for awhile and inflate this sac and then take off on these sort of moth-like, buoyant flights, low over the tundra, emitting this incredibly resonant hooting song as it’s circling its territory, trying to chase off other males and attract a female…  It’s an incredible thing to see this bird floating toward you uttering this loud resonant hooting sound"

Learn more about the Arctic National Wildlife Refuge at birdnote.org and Audubon.org.

Songs and calls of the birds at the Arctic National Wildlife Refuge provided by The Macaulay Library of Natural Sounds at the Cornell Lab of Ornithology, Ithaca, New York, recorded by M.J. Anderson and Gerrit Vyn.   Feature of Pectoral Sandpiper by Gerrit Vyn LMS 130964.