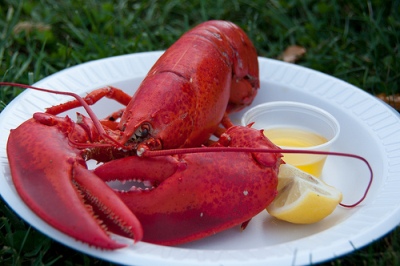 A sample of the cuisine served at the New Hampshire Fish and Lobster Festival. Photo: Selbe B / CC BY-NC-ND 2.0

Lobsters are a delicacy in restaurants. Their rich, sweet meat is served as a main course in pies and soups, or just in its own shell. Because of its taste and high demand, lobstermen can get a premium price for these crustaceans. This year, though, all that has changed.

Due to warmer temperatures and good conservation techniques, lobster populations have boomed, leaving Maine lobstermen with more crustaceans than they know what to do with. Flooding the market with these shellfish has driven the price for lobster downward. It’s now $1.35 per pound compared to $3.80 per pound just last year. This leaves lobstermen in a difficult position: Although they need to catch more lobster to meet their expenses, providing even more of the product means that prices will plummet even further.

In an interview with the New York Times, Time Eaton, a lobsterman from Maine, said, “I didn’t used to come in with a huge haul to make a living. Now I do.”

Lobster wasn’t always the delicacy it is today, though. In colonial America, the meat was considered a pauper’s food. Poor Irish immigrants bought the crustaceans on the street from peddlers, while jails fed a constant stream of lobster products to their inmates. Homeowners used ground up shells as fertilizer, and farmers sometimes used the meat to feed their pigs.

So how did the lobster go from being fed to paupers to princes? The 1860s saw the advent of the lobster canning business. The crustacean became overfished and soon, the canneries had to use several smaller lobsters to fill a can instead of one or two big ones. At the same time, wealthy vacationers began to flock to Maine, craving the sights, smells, and tastes of the country. Restaurants started to realize that while a smaller lobster couldn’t fill a can, it could certainly fill a dinner plate. The upscale market for the crustacean was born.

Today, the lobster fishery continues to use sustainable practices for management. Mainers in particular have seen the growth of their industry by determining the maximum number of traps each licensed lobsterman is allowed to use, and keeping a strict watch on the lobster population. This success is partly why lobstermen now face their current crisis.

Of more concern, though, is the fact that this population boom might precede a crash. In an interview with the Washington Post, Diane Cowen, head of the Lobster Conservancy in Friendship, said, “When the water temperature doesn’t fall below 40 degrees for very long, lobsters don’t take enough time off from growing to save energy for reproducing.” This means that although a glut of lobsters is being caught due to the warmer temperatures, they may not have had a chance to reproduce and restock the population. This could mean fewer lobsters in the future.

If the population does crash, fishermen might find themselves with smaller catches that are unable to meet rising demand. But there is a silver lining; at least they would be paid more per pound.

Blue Hue: Rare Lobster Discovered by NH Fisherman
When a New Hampshire fisherman noticed a metallic blue object in his lobster trap this Wednesday, he just thought he’d caught an old Miller Lite beer can. Little did 52-year-old Bill Marconi know, he had just pulled in a once in a lifetime catch – an extremely rare, cobalt blue adult lobster.

Seafood for Thought: How Might Climate Change Affect American Lobsters?
Water temperature is crucial throughout the lobster’s life, making the species acutely susceptible to warming oceans.