Ashleigh Scully may be only 14, but this young photographer already shoots like a pro. She’s got an impressive list of awards, besides cracking the Top 100 in this year’s Audubon Photography Awards. Other accomplishments include: first place in the youth landscape division in the 2016 Yellowstone Forever Photo Competition; highly honored (18 and under division) in 2015 Nature’s Best Photography Windland Smith Rice International Photography Awards; and finalist (11- to 14-year-old division) in the Wildlife Photographer of the Year competition of the London Natural History Museum. She’s even been on Ellen. Scully spoke with Audubon about how she got into photography, the pros she looks up to, and what she wants to do next.

Audubon: You’re already an accomplished photographer, with quite a portfolio and a bunch of awards. When did you get interested in photography?

Ashleigh Scully: I really got into nature when I was younger, like seven or eight. I loved to photograph snakes, frogs, turtles, butterflies, and swallows in my backyard. My parents would take us to the Great Swamp National Wildlife Refuge and the Raptor Trust [both in New Jersey] on the weekends, and that was inspiring. I’ll never forget the first red fox photo I took at the refuge—it was so exciting! I also took a trip to Alaska with my grandparents when I was eight, and that had a big impact on me. I saw brown bears feeding on a whale carcass, and I was excited to get home and learn about how I could photograph large mammals and predators one day.

A: What camera did you start out with?

AS: When I turned eight, I got an Olympus point and shoot for my birthday. I used it around our house a lot. When I started to photograph more, I got a pink Nikon 1 that I could attach some longer Tamron lenses to. After another year I started using my parents’ camera bodies. My mom had a Sony A55, and my dad had a Canon 7D that they used to photograph me and my siblings playing sports. Pretty soon, after some lessons in manual exposure, I started using only my dad’s Canon, and I’ve been using it ever since.

A: Why do you do bird and wildlife photography?

AS: I was raised to have a respect for all living things, and I love that I now have an ability to explore and capture nature to share with my family and my friends. In the last couple of years I have learned a lot about wildlife conservation photography. There are many women photographers I look up to who do this: Karine Aigner, April Bencze, Melissa Groo, Jaymi Heimbuch, Cristina Mittermeier. I have used my photos to raise awareness of wildlife in my hometown by selling photo books about red foxes and owls. I’ve also donated images to nonprofits to help fundraising.

Right now I want to learn more about mountain lions. I spent a day in the field with the Teton Cougar Project this winter, and I can see now how photography can open people’s eyes about wildlife. I always photograph my subjects with care and respect, and I think that’s a great start to being a wildlife conservation photographer. 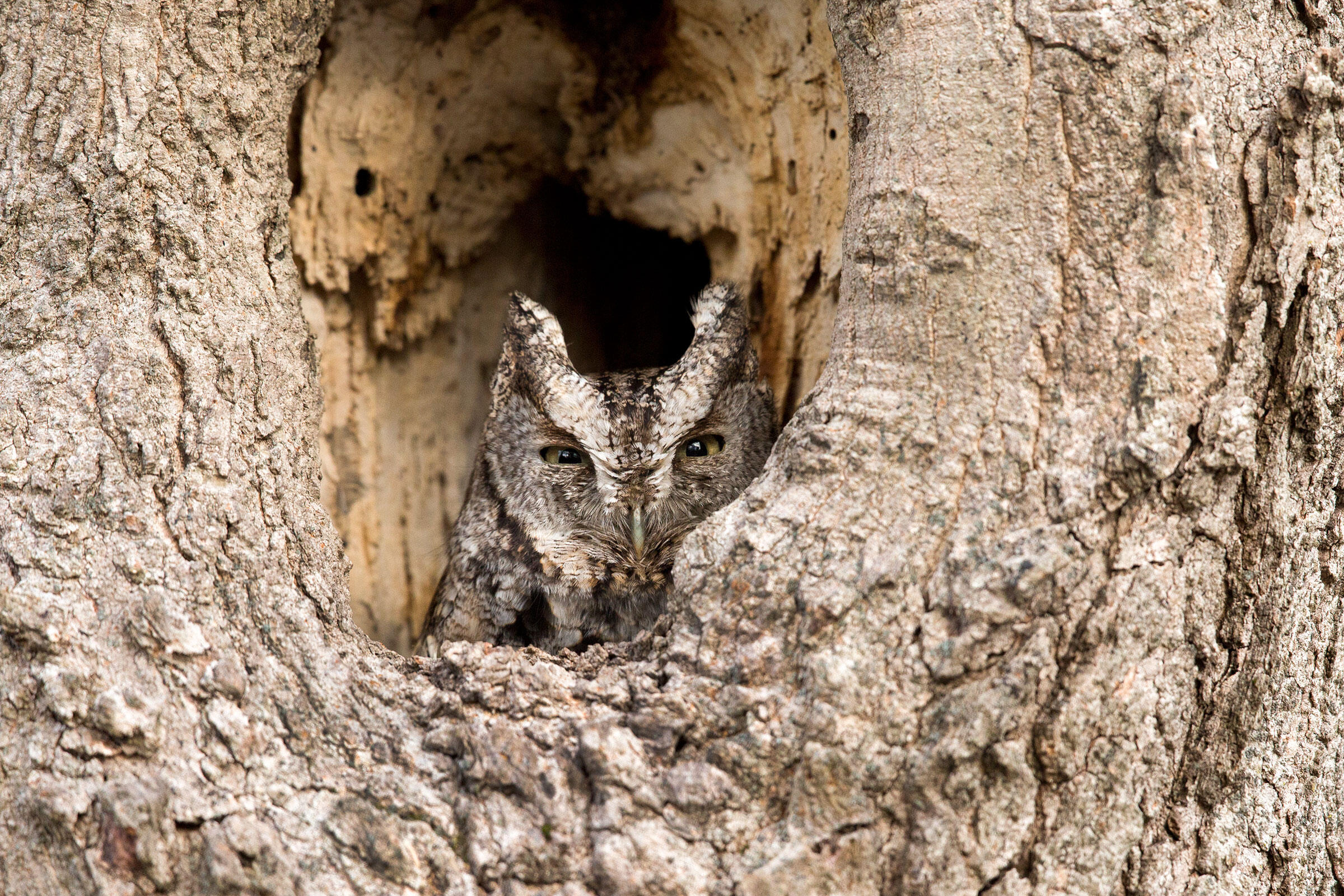 A: What’s your favorite bird to photograph?

AS: Definitely the Eastern Screech-Owl. We have them around our home, and I like to drive with my dad looking for them on the country roads. When my window is open at night I sometimes hear them calling, and the sound brings back so many great memories of photographing them. Eastern Screech-Owls seem to be very tough. Seeing them in a tree cavity or roosting in a bush or tree is amazing. A few years ago a screech-owl nestbox in our yard was used by a gray morph and a rufous morph screech-owl, and they had two babies. I was there with my camera when they fledged, and that moment is another reason they are my favorite bird to photograph.

A: Can you share an experience that helped you to learn a new appreciation of birds?

AS: Last summer, after hearing their screeching calls to their parents, I found some Great Gray owlets that had recently fledged. I spent a couple of afternoons near them in an aspen grove, watching their behavior and photographing them. I saw the parents feed them many times—I was amazed by how hard they were working. Each time they came back to a fledgling with a vole or pocket gopher, they left to find more food for the other owlets. When all three were fed, one of the adults flew off to start the cycle of feeding all over again. I wondered if the parents ever got a break.

A: Do you have any advice for someone who may not have access to the top-of-the-line gear?

AS: When I started out I was lucky to have access to professional equipment that belonged to someone else. But the equipment I first learned with was affordable and was good enough to let me capture some of my favorite photos. Photography isn’t about the equipment; it’s about you and creating your own style. You can learn technique, composition, and other things even with your iPhone or a point-and-click camera. You can also borrow or rent equipment, and some stores even sell used gear. So just study your subjects, read a lot, find a mentor, and practice with whatever you have!

A: What bird haven’t you photographed that you would someday love to?

AS: I have photographed many of the North American owl species, but the one that I haven’t found yet is the Northern Pygmy Owl. I looked really hard for one last winter around Yellowstone but never saw one. People tell me how small they are, and it’s so hard to believe. One time, years ago, one flew in front of me on a chairlift. That moment encouraged me to search even harder for them with my camera. One day I’ll photograph one—I know it.

A: Do you want to be a professional wildlife photographer?

AS: Definitely. I want to do a lot of things, of course, but one thing that’s really important to me is to help to give wildlife a voice. It may be hard to make a living as a photographer, but if I love doing it, and I can help raise awareness of my subjects, that’s all that matters to me.