Here’s one for the annals of fascinating, adorable animals you’ve likely never heard of: the long-eared jerboa. These rodents, whose ears are about a third larger than their head, bring to mind both mice and kangaroos. Mice because of their body shape and size; kangaroos because they have very long hind legs and move by jumping, as the video above shows. These resilient rodents live in desert habitats from southern Mongolia into northwest China, and it’s thought that they subsist largely on a diet of insects. 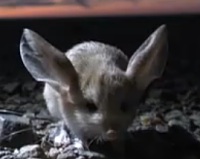 The jerboa is endangered and thought to be at risk from drought, water sources drying up, and increasing numbers of grazing livestock in some areas. But so little is known about the creatures that scientists don’t even have an estimate of their population size.

As part of an innovative global conservation initiative called the EDGE of Existence, in the Gobi desert researchers are conducting research to better understand the jerboa’s range, population trends, threats it faces, and ways to bolster habitat protection.

The jerboa is just one of the distinct (both in terms of looks and behavior) and endangered species that the program is working to conserve. (EDGE stands for Evolutionarily Distinct and Globally Endangered.) The group goes beyond pandas and polar bears, working to ensure that one-of-a-kind species—like the Chinese giant salamander (aptly named) and long-beaked echidna (also aptly named)—don’t slide into extinction unnoticed. They aim to raise awareness of the species most at risk, initiate projects for species that don’t already receive conservation attention, and train and involve local conservation leaders.

Within three groups—amphibians, mammals, coral reefs—they’ve identified the top 100 EDGE species, and they’re currently identifying top 100 bird species. Contenders for EDGE birds include the critically endangered Bali starling, which is the only member of its genus and estimated to number just 24 adults in the wild, as well as the endangered yellow-eyed penguin—the only member of its genus and unlike most penguins, is a solitary breeder.

Click here to explore the weird and wonderful world of EDGE species. And I’ll leave you with one more video, this one showing how to find the nocturnal red slender loris in the rainforest in the dark of night.