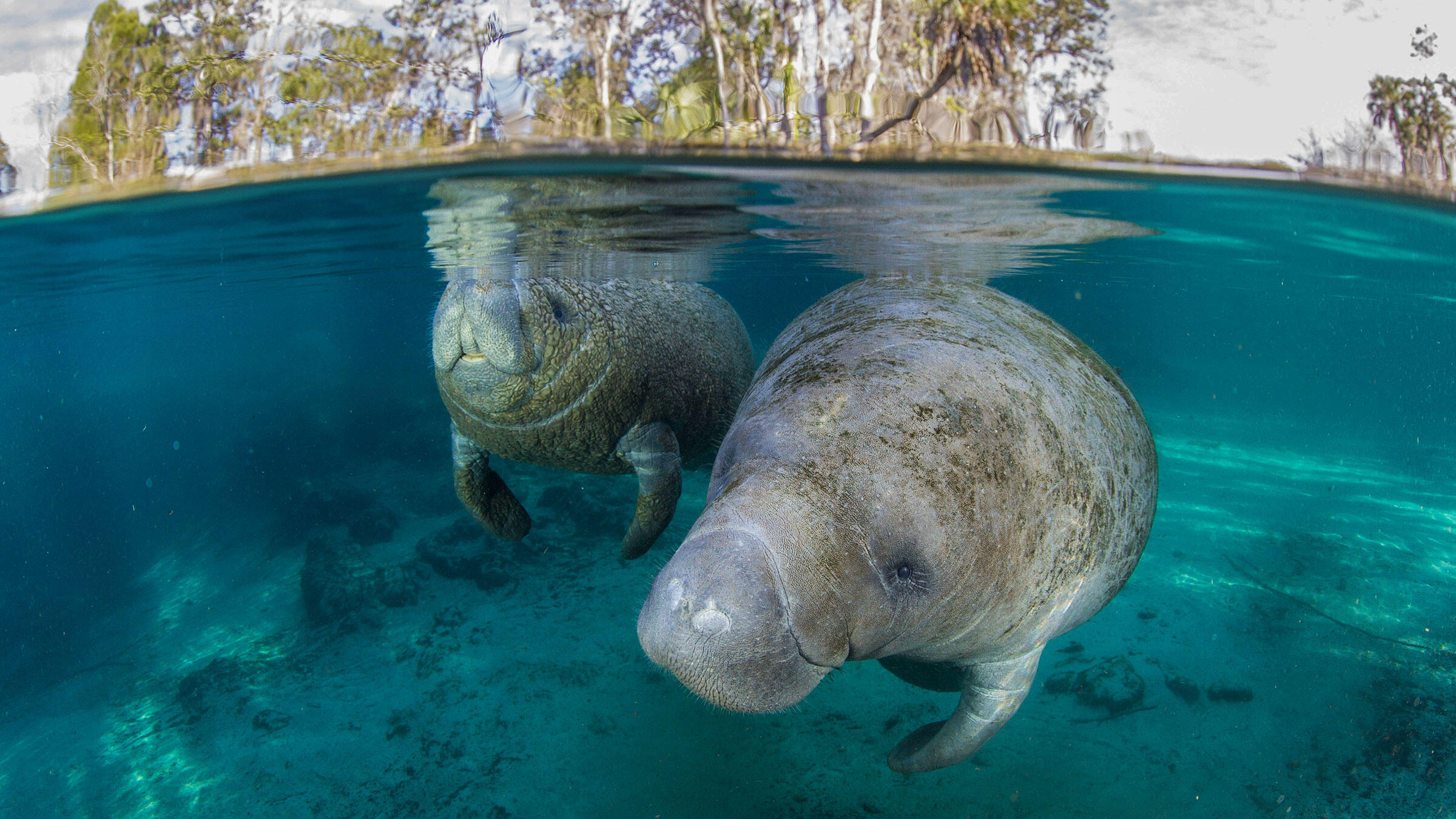 A surprise appearance from three endangered guests has everyone at the Pascagoula Audubon Center buzzing.

Between brilliant Prothonotary Warblers, splashing otters, and endemic map turtles, the Pascagoula River Audubon Center in Moss Point, Mississippi, sees its fair share of amazing wildlife. Legend has it that dolphins and even a shark have wandered into the rich, aquatic ecosystem on its 70,000-acre grounds. Last week, the center received a few more special visitors: a female West Indian manatee swimming through Rhodes Bayou with her two adork-able babies.

The dramatic sighting occurred on June 21, the first day of Pascagoula's water-science summer camp. A crew of middle school students and staff were out on the boardwalk when one of the kids spotted three amorphous figures floating under the murky water, turned dark by decomposing plants. At first she thought it was a group of otters—that is, until a gray muzzle poked through the surface. A volunteer standing on the Dantzler Street bridge captured the scene on video.

After wintering in Florida, manatees migrate to the warm, coastal waters of Alabama and Mississippi, munching on vegetation along the way. But they’re not often seen in the rivers and lakes around Moss Point. The Rhodes Bayou sighting, which lasted for about 20 minutes, was a first for the students and Audubon staff.

Erin Parker, Pascagoula’s education and outreach manager, promptly reported the incident to Dauphin Island Sea Lab’s (DISL) Mobile Manatees Sighting Network, which tracks the whereabouts of the giant mammals for research purposes. To her surprise, DISL’s head manager instantly recognized the adult by the scars on her body, which were likely sustained by injuries from a motor boat—the leading cause of human-related injuries and deaths in manatees. This was further confirmed by a “belt” on her tail, indicating the former presence of a geo-locator tag. The mommy manatee, they learned, is a ripe 40 years old—the typical lifespan in the wild ranges from 40 to 60 years—and had lost her tag about 18 months ago. Parkers says the researchers were ecstatic to get an update on an animal they thought had fallen off their radar.

“That’s really the power of citizen science. We don’t have to be PhDs, scientists, or ornithologists,” says Parker. Seeing the manatees, she adds, was a nice touch to the camp's lessons on why water quality is important. Poor water quality, for instance, can trigger toxic algal blooms that can not only poison manatees, but also kill the sea grass they feed on.

Known for their lumbering movements, giant appetites, and gentle demeanor, West Indian manatees have been federally protected as an endangered species since 1972. Decades of conservation efforts and legislation led to mandates on boating speed limits and waterfront developments, resulting in a recent upswing in populations. In January, the U.S. Fish and Wildlife Service proposed reclassifying the species from endangered to threatened.

Parker advises locals to be on the lookout for the mammals along their summer-migration routes. The center will continue educating the public on the topic: Next month, it's hosting an event that teaches participants how to protect and identify manatees. For more details, go to the Pascagoula Audubon website.