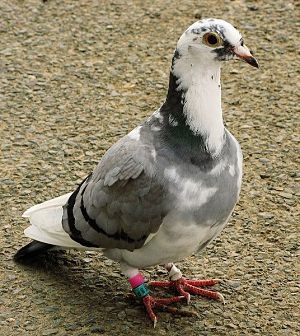 Former heavyweight champ Mike Tyson’s cameo in The Hangover was pretty funny, but People for the Ethical Treatment of Animals isn’t laughing about his new small-screen project. The cable network Animal Planet has purchased a TV series in which Tyson will wade into the competitive world of pigeon racing.

The program, Taking on Tyson, will begin filming this spring in New York City and is slated to debut in early 2011.

More from The Star:

Animal Planet says the show "peels back new layers of the remarkable persona and deep humanity of Mike Tyson," and Animal Planet's general manager Marjorie Kaplan says that "Tyson's passion for his pigeons takes my breath away."

PETA finds its own reasons to gasp: "Animal Planet needs more programs in which people go to bat for animals, like Whale Wars and Animal Cops, and fewer showcasing cruelty and profiteering at the animals' expense." PETA President Ingrid Newkirk says of Tyson's breathtaking passion for his pigeons: "One wonders if Mike Tyson realizes that ..... these gentle, loyal birds who race their hearts out trying to get home to their life mates often end up lost in storms, or coming home just have their necks wrung for failure to beat their competitor's time."

Pigeons aren’t the only avian species the activity puts at risk—raptors can be harmed, too. Audubon’s Ted Williams touched on racing pigeons in a 2008 story, “Fowl Play,” in which he examined federal wildlife officers cracking down on hobbyists who kill raptors that prey on the pigeons they raise. He focused mainly on “roller”

“Roller pigeons,” popularized in Birmingham, England, are bred for a genetic, seizure-like disorder that, in flight, causes them to simultaneously and uncontrollably throw up their wings, cock back their heads, and flip backward, somersaulting repeatedly for hundreds of feet, not always recovering before union with terra firma converts them to carrion. Regulated by the National Birmingham Roller Club (NBRC), the oldest and largest organization promoting the hobby, local clubs throughout the United States compete to see whose birds tumble best.

But, Williams notes, during competition the birds are often picked off by peregrine falcons, red-tailed hawks, Cooper’s hawks, and other raptors:

When their pigeons start doing their thing, birds of prey see them for exactly what they are—genetic invalids ripe for plucking. As Tony Chavarria, owner and publisher of the Birmingham Roller Pigeon Discussion Board (roller-pigeon.com), perceptively notes, “Many fanciers have been forced to leave the hobby/sport due to incessant attacks by these birds of prey which seem to focus on these roller pigeons as a primary food source (especially in the cities).” Solution: Make the world safer for rollers by continuously killing raptors as they gravitate to roller lofts from all compass points, like stars to black holes.

Tyson has been a fan of roller pigeons since at least 2005, when he told USA Today, "This is my next love, after my kids. They're very soothing.” (Note: Tyson hasn’t been tied to any raptor deaths.)

Birds of prey have also fallen victim to pigeon racers, but there are few convictions, Williams writes. “Racing-pigeon clubs are tough to work undercover because there’s little interaction between members; the birds are just released at some distant location and their return times punched in. Rollers, on the other hand, orbit the member’s property, and competitions progress from house to house, with much socializing at each.”

To find out what you can do, click here and scroll to the bottom of William’s story.

On a brighter note, another new Animal Planet series will focus on dolphin conservation. The show, “Dolphin Warriors,” is picking up where the Oscar-winning documentary “The Cove” left off, investigating Japan’s controversial dolphin trade. The L.A. Times reports that the show may premiere in the fall, after “The Cove” runs on the channel this summer.