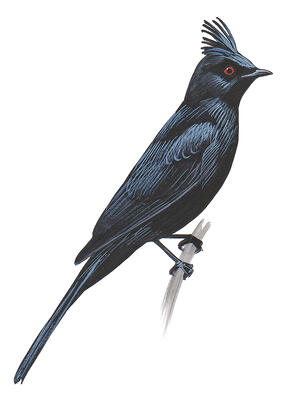 It’s the most beautiful time of the year,
Lights fill the streets spreading so much cheer,
I should be playing in the winter snow,
But I'mma be under the mistletoe.

You can stop right there, Justin Bieber; we all know what’s coming next. Kissing under the mistletoe has been a holiday tradition ever since the English got it trending back in the 1800s (the plant first popped up as a symbol of love centuries ago in ancient Norse mythology). But mistletoe isn’t just for carrying out romantic ploys. From a bird’s perspective, the plant isn’t holiday decor—it’s a cafeteria, a nursery, a place to shack up . . . basically, it’s a means for survival.

Here’s a closer look at mistletoe, and what it means to birds.

Spreading holiday cheer, all year round

There are about 1,300 species of mistletoe out there, though only 33 are native to the United States. Fossil records show that they’ve existed for millions of years. Out in the wild these evergreen plants are hardy, probably because they’re parasites: They grow on other trees and shrubs, stabbing their roots into the host plant to suck out its water and nutrients (heartwarming, I know).

The not-so-cute meaning behind “mistletoe”

Here’s a fun etymology lesson: In Old English, "mistletoe" translates to “dung on a twig.” It used to be known as misteltan (“mistel” meaning dung and “tan” meaning twig). Apparently, the old Germanic tribes noticed that the plant sprouts out of bird droppings, and decided to label it as such. Yeah, you can’t make this s**t up.

Mistletoebirds (not something I made up for this article)

Yes, it’s all one word. These red-breasted cherubs live in Australia and the outskirts of Indonesia, where they spend their days dining on mistletoe berries (hence the name). The berries have seeds that are hard to digest, though—and unfortunately, Mistletoebirds lack a unique organ most birds do have, a gizzard, which stores and breaks down hard-to-digest bits and meals. Because the Mistletoebird lacks this tiny grindhouse, the seeds pass through its gut whole. This actually works out for the plant, since the seeds come out in perfect shape for germinating. They’re also sticky, and are usually strung together like a garland—ready to decorate any branch they’re pooped out on.

The plant that keeps on giving

Mistletoe (especially the dwarf variety) is a real favorite among birds in the American West. Raptors like Spotted Owls, Cooper’s Hawks, and Goshawks nest in it, while migratory songbirds such as bluebirds and Evening Grosbeaks gorge on its berries. Other species—Northern Beardless-Tyrannulets, Gray Jays, Pygmy Nuthatches, Western Tanagers—hide in the thick “witches’ brooms” to dupe predators. But the biggest mistletoe fan in North America is the Phainopepla, a desert bird that uses the plant as its main food source in winter. In the Sonoran Desert, where the parasite grows on acacia and mesquite trees, Phainopeplas spend a lot of time gulping down mistletoe berries. It’s a self-sustaining cycle: The mistletoe uses the bird as its seed mule, so the more fruit the Phainopepla eats, the more desert the plant can cover.

Even the ghost of mistletoe is better than no mistletoe. A new PLOS One study by David Watson, an ecologist from Charles Sturt University in Australia, shows that the plant can help diversity—after it’s all dried up and dead. In eucalyptus woods where decomposing mistletoe littered the floor, Watson counted 37 percent more insect-eating birds than in mistletoe-free zones. The reason behind this, Watson thinks, is that dead mistletoe is great for insects and spiders, so species like Grey Shrike-thrushes and White-winged Choughs can dig through it and find all the crunchy crawlers they want and deserve. Now that's the true holiday spirit.

Correction: There are 33 native species of mistletoe in the United States, which fall under two genera.