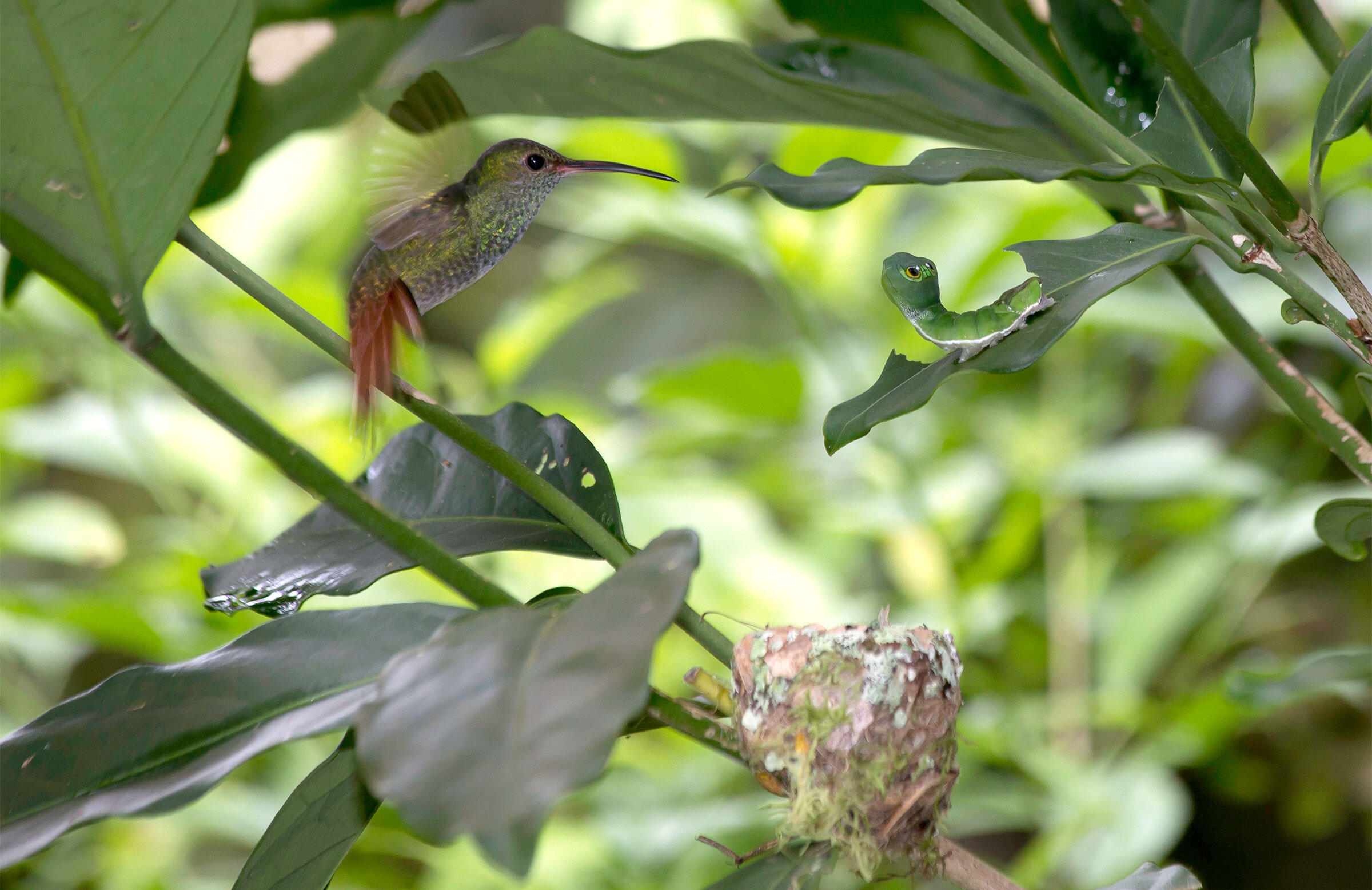 A female Rufous-tailed Hummingbird rears up to attack a Costa Rica leaf moth caterpillar. This close-up image was captured by a trained biologist with minimal disturbance to the bird and its nest (so don't try it at home!). Photo: Jim Marden

The Costa Rica leaf moth is truly a master of disguise. As a newly hatched larva, the species mimics bird poop. As a later-stage caterpillar, it can inflate its head to make it seem more snake-like. And as an adult moth, its wings look like every other dead leaf on the forest floor. With this impressive trickery, the moth avoids predation, first by being unappealing, then by looking threatening, and, finally, by blending in. But as one scientist recently discovered, that second stage—when the caterpillar impersonates a snake—can have unintended consequences.

Earlier this year, Jim Marden, a biology professor at Pennsylvania State University, was leading a tropical-ecology course in Costa Rica when he was tipped off to a fierce showdown between a serpentine caterpillar and a female Rufous-tailed Hummingbird. Mere inches below was the hummingbird’s compact, lichen-covered nest, filled with a pair of small white eggs.

As Marden’s thrilling photos and video reveal, the disguise was clearly working—but not to the insect’s benefit. “What normally works well to keep birds away backfired,” he says. “The hummingbird was checking it out, probing it, and attacking it almost continuously.”

The interaction was bizarre, though not surprising. With its eggs still days from hatching, the hummingbird couldn’t just fly away, so it put itself between the “snake” and the unborn chicks.

“This is a classic example of a mother defending her nest,” says Nick Hendershot, a biologist at Stanford University, who studies birds’ diets in Costa Rica. “It’s an evolutionary instinct to defend your babies.” And it’s a good one: Nest predation by snakes and other egg-hungry animals is a leading cause of hummingbird mortality in the tropics, he says.

Little did the hummer know, the threat was empty. Other than menacing some nearby leaves and possibly attracting larger, hungry birds, the caterpillar posed no real risk to the adult or its babies, says Alejandro Rico-Guevara, an ornithologist at the University of California, Berkeley. And vice versa. “Hummingbirds certainly don’t eat caterpillars that large,” Hendershot says.

As Marden explains, these two species were caught in a positive feedback loop. “You have two animals following behavioral rules of thumb that have been stuck in this loop,” he says. When the caterpillar became agitated, it whipped out the false snake head, making the hummingbird feel threatened. And as the hummer’s attack intensified, the caterpillar became more snake-like—lifting the false head up, flaring out the sides, and swaying it back and forth. From there, it escalated.

The scuffle lasted for at least half an hour, and it only ended when the seemingly unharmed caterpillar crawled away—not because it took the high road, but most likely because its appetite kicked in, Marden guesses. With its head tucked away, the insect relocated to a different leaf about a meter away. “The hummingbird settled down, and the caterpillar resumed feeding,” the scientist says.

A few days later, the hummingbird eggs hatched, revealing two delicate, wrinkly infants. The caterpillar, on the other hand, likely wrapped itself in a cryptic chrysalis—destined for a life of obscurity and much less drama.