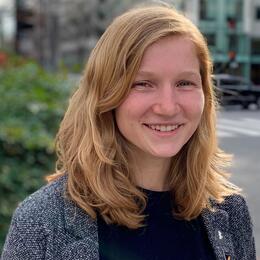 In October Rep. Raúl Grijalva and other members of Congress introduced the Ocean-Based Climate Solutions Act, which would, for the first time, recognize the roles of our ocean and coasts in efforts to address climate change. So far, the U.S. has not taken full advantage of the ample opportunity to deploy well-sited clean energy in the ocean, which could provide carbon-free electricity to coastal states.

It’s critically important that we invest in clean energy like offshore wind farms to eliminate carbon emitted from our energy system. At the same time, we must also seize opportunities to protect and restore our ecosystems that sequester carbon—like marshes, mangroves, and seagrass beds—by storing carbon in their roots, leaves, and soils.  These solutions, which can also be deployed across landscapes like forests, grasslands, agricultural lands, in addition to the ocean, often provide a number of co-benefits, including improved bird habitat, cleaner water, and protection from flooding. The bill includes a comprehensive set of innovative policies for tapping coastal and ocean resources to both reduce the carbon pollution that is causing climate change and to protect against climate threats to both coastal ecosystems and communities.

The U.S. is facing a climate emergency. In addition to the escalating disasters we are already seeing in coastal communities, we are also witnessing a dramatic loss of biodiversity. We have already lost 70 percent of sea- and shorebirds in the U.S., and two-thirds of North America’s bird species are vulnerable to extinction if we fail to dramatically reduce carbon pollution. The birds are telling us that we have a rapidly closing window to reduce carbon pollution in order to avoid the worst consequences of climate change.

The bill recognizes the important role of the ocean and coasts in addressing the climate crisis, and it advances important efforts to reduce the carbon pollution that is causing the planet to warm, including the following issues.

The bill sets important goals for expanding offshore wind production and ensuring that wind energy avoids, minimizes, and mitigates impacts to birds and other wildlife. These goals include permitting at least 25 gigawatts of offshore wind by 2030, which would double the potential that is currently leased, and would create thousands of jobs as a result. Offshore wind energy represents some of the greatest potential for carbon-free electricity production in the United States. Wind power will play a critical role in helping the U.S. transition to an electric grid powered completely by clean energy, which will reduce air pollution from fossil fuel-burning power plants—pollution that research has shown disproportionately affects low-income communities and communities of color. While we are still learning exactly how offshore wind development will impact birds and other wildlife, the bill provides funding to investigate these interactions, which will be critical in future siting decisions. It is essential that the U.S. speeds up efforts to bring wind energy online, while ensuring protections for birds and other wildlife.

The bill would also advance efforts to assess, protect, and restore “blue carbon” resources— like mangrove forests, wetlands, and seagrasses—that naturally capture and store carbon pollution and provide other environmental and economic benefits to communities. U.S. blue carbon resources can sequester carbon pollution at four times greater rates than forests and will be a critical component of helping the U.S meet its goals of net-zero carbon emissions by 2050. The bill would prioritize projects that protect fish and wildlife habitat, enhance community resilience to climate impacts, and benefit lower-income communities and communities of color.

Reducing our reliance on offshore drilling

The bill would prevent any future offshore oil and gas leasing on the Outer Continental Shelf. While there are examples of ways in which some revenue from these leases has been used to fund conservation—such as the Land and Water Conservation Fund, and the Gulf of Mexico Energy Security Act—offshore drilling generally presents a huge environmental risk. Accidents related to offshore drilling, such as the 2010 BP oil spill, have had huge impacts on human life, on birds and other wildlife, and on the economies of nearby communities that depend on fishing or tourism. As the U.S. transitions to a clean energy future, new drilling should be minimized.

Audubon applauds the House of Representative’s leadership in advancing this meaningful legislation. The bill provides pathways for harnessing and protecting our ocean and coasts in efforts to address the urgency of the climate crisis. We look forward to working with Congress on these and other important efforts to ensure that our communities, economies, and wildlife are able to survive and thrive in the face of climate change.

This is part 2 of a 4-part series on the Ocean-Based Climate Solutions Act. Check out other stories in this series on coastal resilience, marine life, and climate equity.