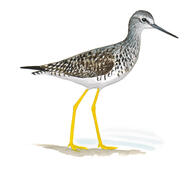 The Rufous Hummingbird, Greater Sage-Grouse, Pinyon Jay, and 67 other birds in the United States are teetering on the edge of disaster, having lost at least half of their populations in the past 50 years. A report released today by North American Bird Conservation Initiative (NABCI) calls these birds “Tipping Point” species, on track to lose another 50 percent of their populations in the same time frame if conservation efforts do not improve.

Since 2009, NABCI has published a report every few years to track the health of breeding birds in habitats across the nation over the past five decades. The State of the Birds 2022 report for the United States focuses on the wane of bird populations across every habitat except wetlands. Among the groups in the fastest decline are grassland birds, such as Bobolinks and Mountain Plovers, which have shown a total 34 percent loss. Lesser Yellowlegs, Whimbrels, and other shorebirds aren’t far behind with populations down by 33 percent. Despite the dire situation, the report also emphasizes the success of 40 years of concerted wetland conservation: Waterfowl and waterbirds have surged 34 percent and 18 percent, respectively.

While some duck, goose, and swan populations are exploding, more than half of all U.S. bird species are dwindling. Without further efforts to restore ecosystems under stress, the report paints a grim future for birds in a nation where climate-intensified natural disasters and human-caused habitat loss and degradation continue to worsen. The report’s authors call on decision-makers to learn from the accomplishments of wetland restoration to save birds and boost climate resilience in other ecosystems.

“Protecting wildlife and biodiversity is something that everybody should be concerned with,” says Peter Marra, a 2022 State of the Birds science committee member and director of the Earth Commons at Georgetown University Institute for Environment and Sustainability. “Once we save birds, we’re going to save a lot of other species that we share the earth with.”

Compiling data from these reports, the authors illustrate how birds act as indicators of the overall health of the environment, informing policymakers and the public of vital conservation needs. “We really can't respond or meet the challenges we’re facing to protect a healthy environment for us and for other species unless we really know the state that it’s in,” says co-chair of the report’s science committee, Amanda Rodewald, also the director of the Center for Avian Population Studies at the Cornell Lab of Ornithology.

The 2022 State of the Birds report is the first overall assessment of the nation’s birds since a 2019 Science study indicating the United States and Canada have lost more than 3 billion birds in the past 50 years. “We're basically watching the process of the sixth mass extinction,” says Marra, who is a co-author of the 2019 paper.

Swift conservation action can bring at-risk birds back from the brink of extinction. The report emphasizes the necessity of these efforts for 90 “On Alert” bird species, which lack Endangered Species Act listings but have lost half or more of their breeding populations in the past 50 years. Within this group, the 70 Tipping Point species are further identified as potentially losing half or more of their populations in another five decades. While there’s a range of urgency within this group, many of these birds are the next likely candidates for listing under the Endangered Species Act, which Rodewald calls “the last-ditch effort” to save a species. “We don't want to get to the point of having to list species.”

Swift conservation action can bring at-risk birds back from the brink of extinction.

Identifying Tipping Point birds allow conservation efforts to begin before a listing is necessary. “Why should we wait for them to get closer to extinction?” Marra says. “We need to figure out the problem much sooner than that.”

Nicole Michel, National Audubon’s director of quantitative science, points to the report's emphasis on the success of waterfowl and waterbirds in recent decades as proof that conservation efforts work. It “gives us hope that we can similarly take action to reverse declines of other species, including these Tipping Point species,” she says.

Underscoring such achievements can create tangible motivators but should not drive complacency, says Mike Brasher, co-chair of the report’s science committee and senior waterfowl scientist for Ducks Unlimited Inc. The American Black Duck, for example, is rebounding after a long decline, but not all waterbirds and ducks have healthy populations—Mottled Duck, Black Scoter, and King Eider are listed as Tipping Point species.

“Although waterfowl populations have fared better than other birds or other bird groups, they’re not out of the woods by any stretch of the imagination,” Brasher says. “The threats, and potential threats, facing them are intensifying.”

NABCI’s U.S. report comes on the heels of the equally distressing State of the World’s Birds published separately by Birdlife on September 29. This year’s report shows how close to half of the world’s bird species are decreasing and “the risk of species going extinct is escalating,” says Lucy Haskell, science officer for the world report. The United States is eighth globally for the greatest number of threatened species.

Despite the alarming findings of both reports, the authors remain hopeful. Advances in research and engagement of community scientists provide researchers with more information than ever before. Estimated at 45 million strong in the United States alone, a global “army of bird watchers” provides a steady stream of new data and insights, Haskell says.

Well-studied and found in nearly every habitat, birds are excellent biodiversity indicators—barometers for the planet’s well-being. Responsive to environmental changes and with population trends mirroring other wildlife, “birds also tell us about the solutions needed to prevent this biodiversity crisis,” Haskell says.

Given the widespread declines, both reports emphasize that proactive conservation across habitats and species will build a healthier environment for animals and people. “It's not just about birds, right?” Rodewald says. “There are so many reasons to engage in conservation actions because they benefit all people.”