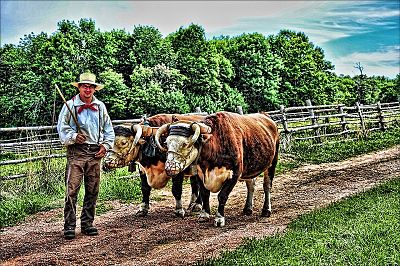 These days, “workhorse” is probably used more often to refer to a hardworking person than a farm animal. After all, most modern farms rely on machines for planting and harvesting. But as diesel prices shoot up, some smaller farmers are again employing oxen and horses in their fields. The return to draft power lowers costs because the animals can be cheaper to keep than tractors, and they run on gas, Tess Taylor reports in The New York Times.

David Fisher, who sells veggies grown with horsepower the Natural Roots Community Supported Agriculture and runs an apprentice program, notes that “There’s an incredible hunger for this kind of education.”

Still, draft animals are likely to be used only on smaller farms because they wouldn’t be economically feasible at larger operations. And given how much time, energy, and patience is required to work with the creatures, “workhorse” applies to both animal and farmer.

The news article focuses on the Northeast, where farms are much smaller than those in the middle of the country. There’s been a lot of activity in the region around sustainable food production over the last decade or so, from cheese making to organic farming. And, as demand has grown for sustainable meat grown on small farms, a problem has emerged: The difficulty of processing it. In the March-April food issue, I wrote about a solution in "Meals on Wheels":