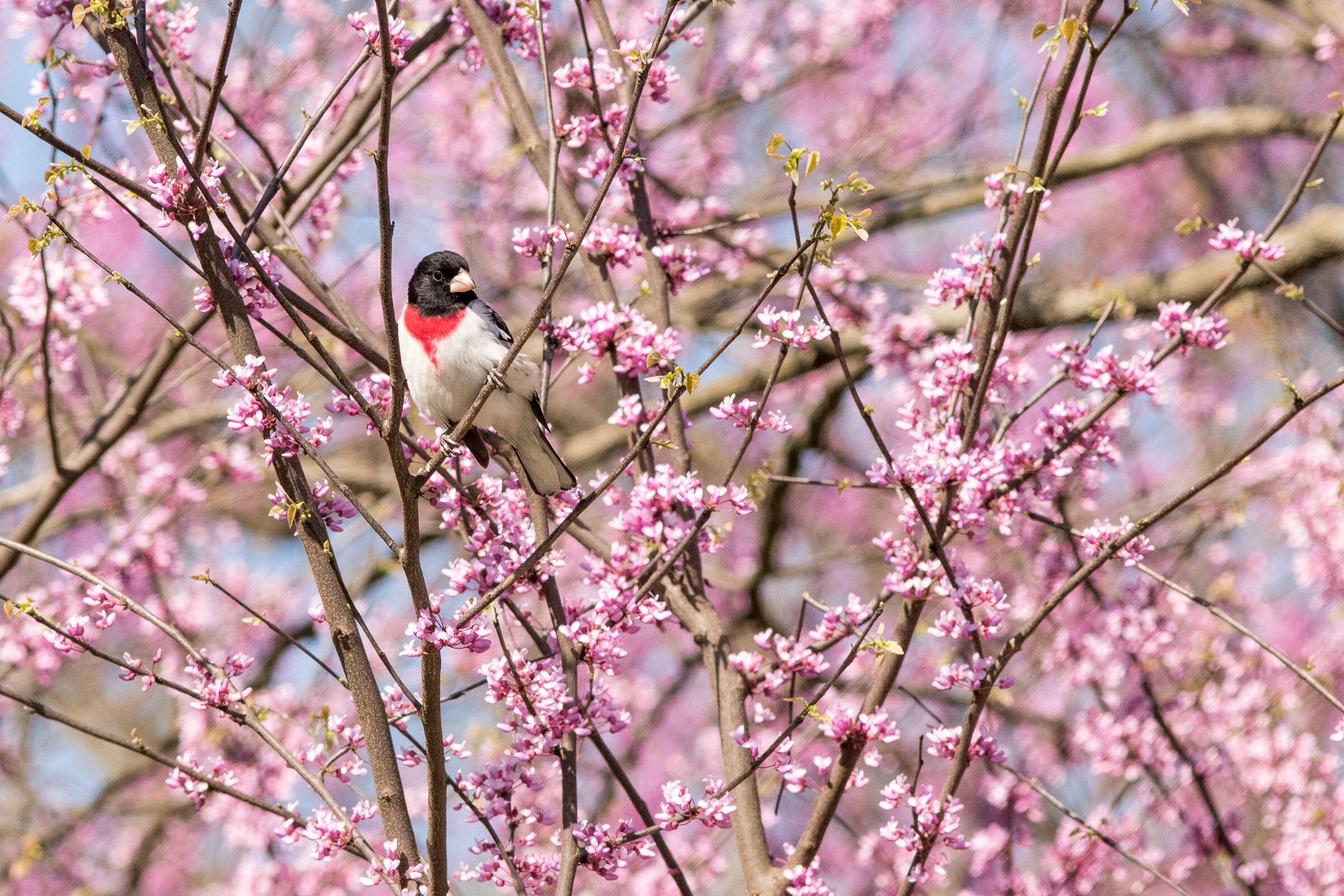 A mockingbird munching on berries. An owl seeking refuge amid the Spanish moss. An oriole diligently working on its hanging nest. What do all these moments captured in the photographs below have in common? Birds, sure, but also: native plants.

Inspired by Audubon's Plants for Birds program, the 2019 Audubon Photography Awards introduced a new Plants for Birds category to raise awareness about the importance of native flora to all wildlife. Meanwhile, photographers were challenged to go beyond their comfort zones and know the local plants they were photographing as well as their target bird species. As you'll see from the variety of stunning images here, the submissions more than exceeded our expectations.

In addition to providing the food and shelter birds, pollinators, and other animals have adapted to through millenia, native plants also serve as an important conservation tool in an era of worsening climate change; birds being forced from their typical habitats or pushed to their limits by extreme weather will be even more dependent on the bounty of food native plants provide over non-native species.

Although the shots below did not claim the winning spots this year—you can see all the APA winners here—they beautifully capture the vital role native plants play in the everyday lives of birds. As you scroll through, learn about each plant, and to discover which bird-friendly plants are native to your area, use our plant finder to get started. With a little luck, maybe next year you can submit photos from your very own backyard.

Rose-breasted Grosbeak on Eastern Redbud (above)

The Rose-breasted Grosbeak is one of many songbird species that are attracted to the bright pink flowers of the eastern redbud. Native to eastern North America, the redbud is a small tree that blooms profusely in early spring. It also supports a variety of wildlife: Butterflies and hummingbirds are attracted to the tree’s nectar; honeybees use the flowers for pollen; Northern Bobwhite and squirrels eat its seeds; and whitetail deer browse the foliage and twigs in the spring and summer. 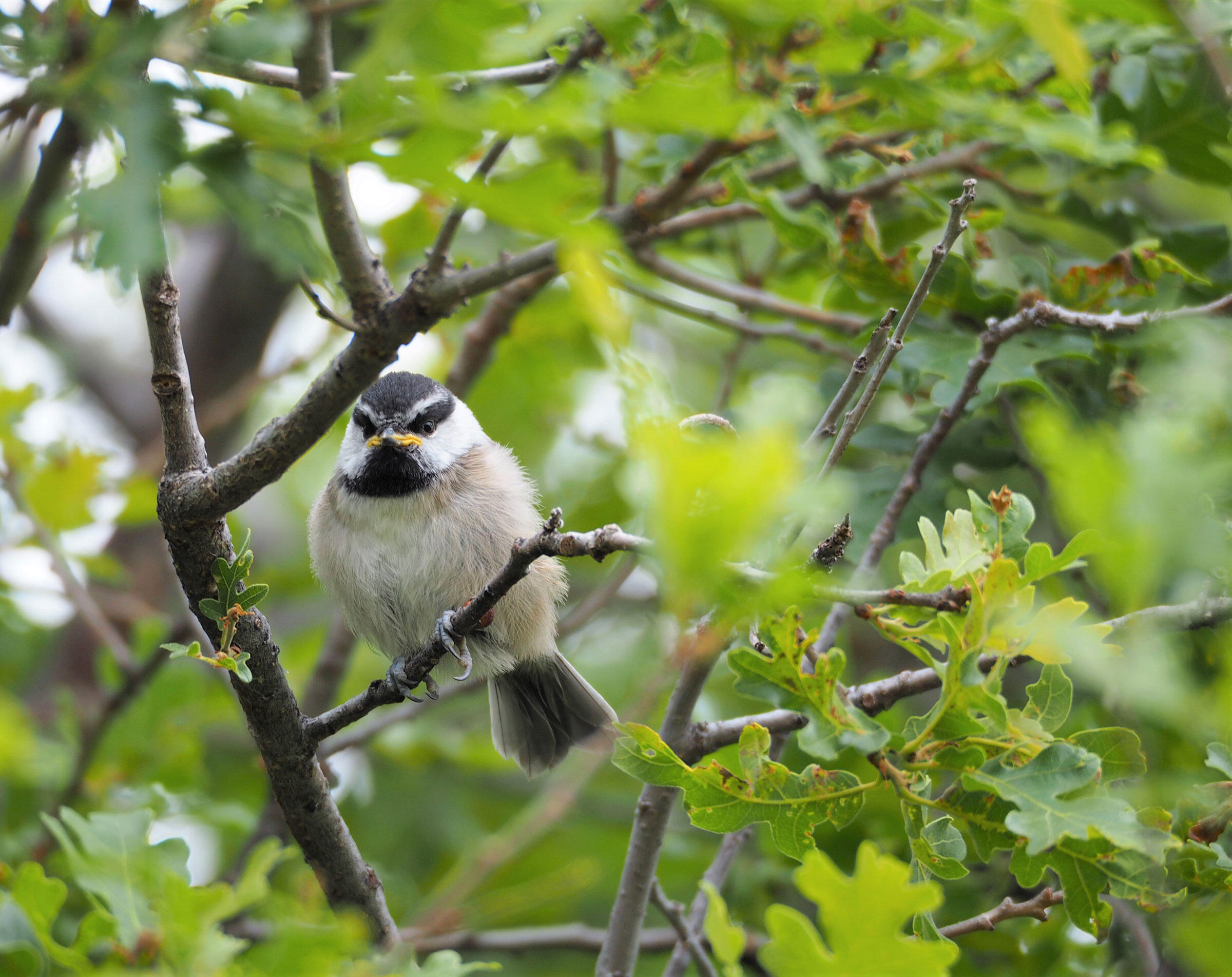 Gambel oak attracts a variety of bird species with its thick foliage and sweet acorns. Mountain Chickadees, Band-tailed Pigeons, Merriam's Turkeys, and Mexican Spotted Owls use the tree as a nesting and foraging site. The small round-crowned tree's acorns also provide food for squirrels, elk, white-tailed deer, and mule deer. Native to the western U.S., the Gambel oak is common in the Rocky Mountains and the Grand Canyon National Park, growing best in dry, high-elevation hills, slopes, and canyons. 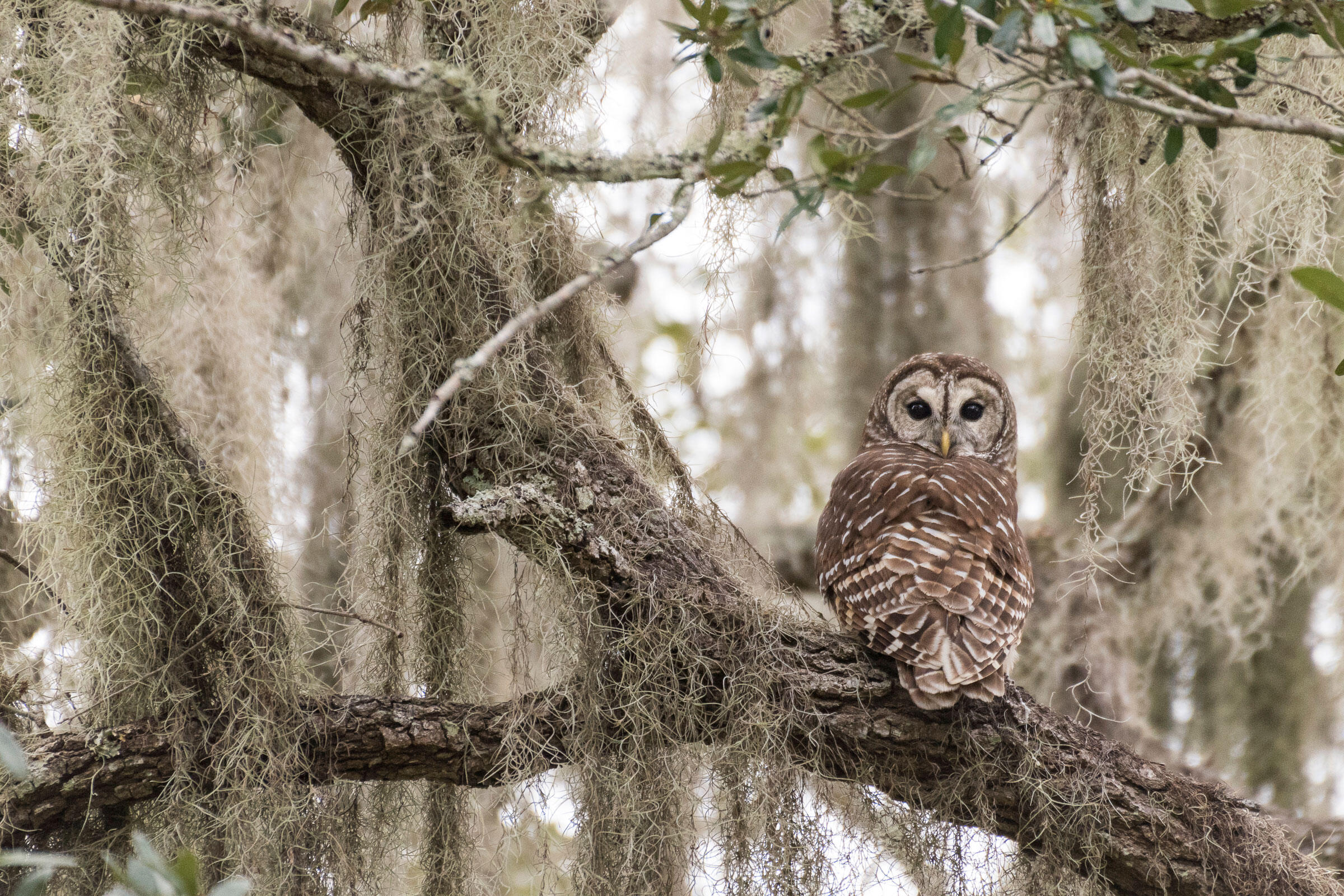 With its short central trunk and long arching branches, the southern live oak serves as a habitat and source of nourishment for a diverse range of animals, including the Barred Owl. Native to the coastal areas extending from Virginia to Florida to Texas, the tree is an emblem of the southeastern U.S. Although the southern live oak is not evergreen, it appears to have leaves all year long, only losing its foliage when new growth appears in spring. Many species including Yellow-bellied Sapsuckers, Mallards, Wild Turkeys, squirrels, black bears, and deer use the tree for cover and its acorns for food. The threatened Florida Scrub-Jay relies on the scrub-form of the tree for nesting, and other birds use the moss that hangs from the tree’s branches to construct nests. 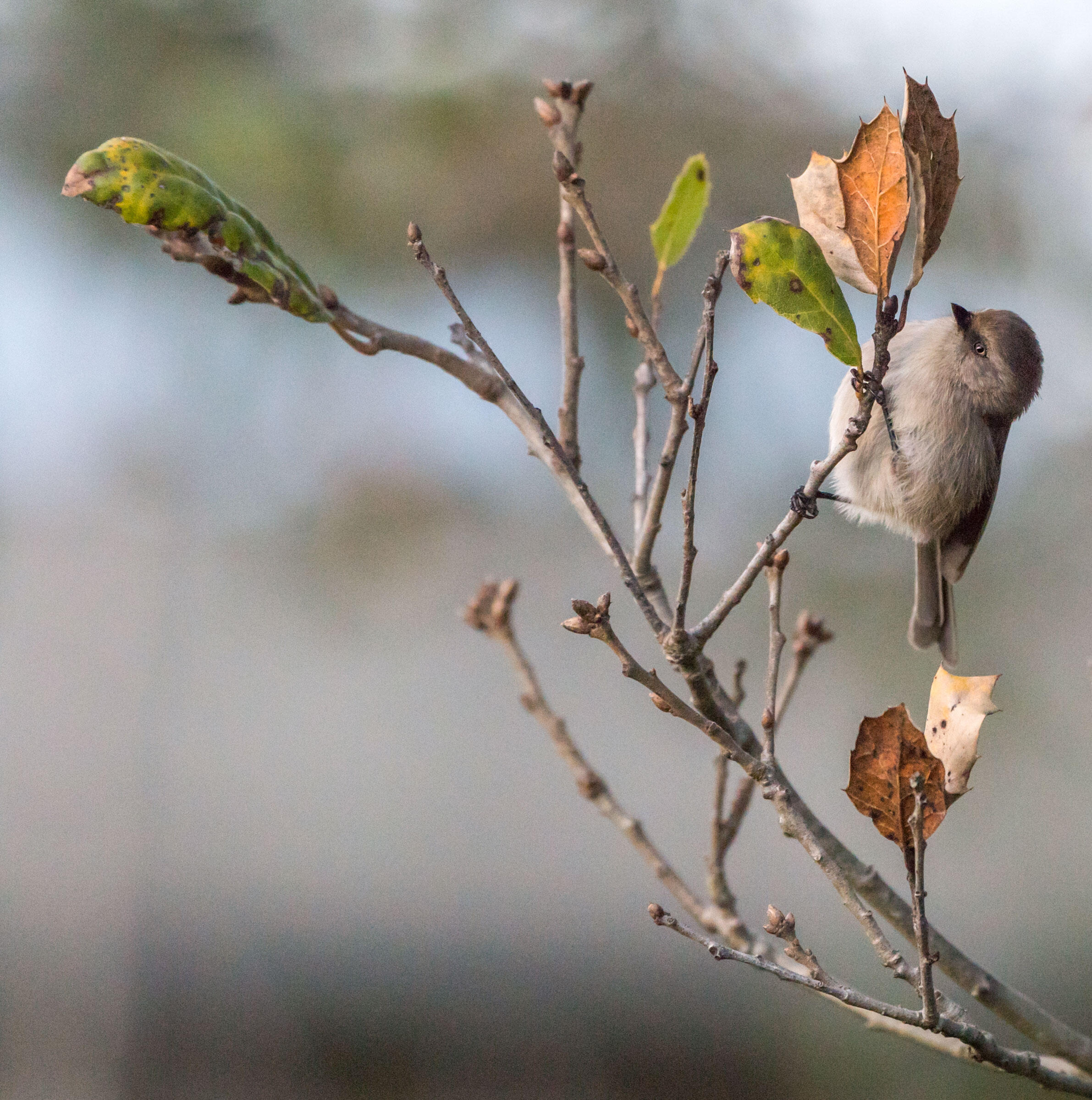 A member of one of the smallest passerine species in North America, this Bushtit hangs vertically from the branch of a coast live oak, which is native to California. This evergreen tree is characterized by its pendulous strings of yellow-green flowers that appear in early spring and attract birds and butterflies. The oak’s acorns also act as a source of nourishment for mammals, reptiles, and invertebrates. One of the only native California oaks that actually thrives in the coastal environment, coast live oak creates a productive space for a number of understory and companion plants, including California buckeye and toyon. 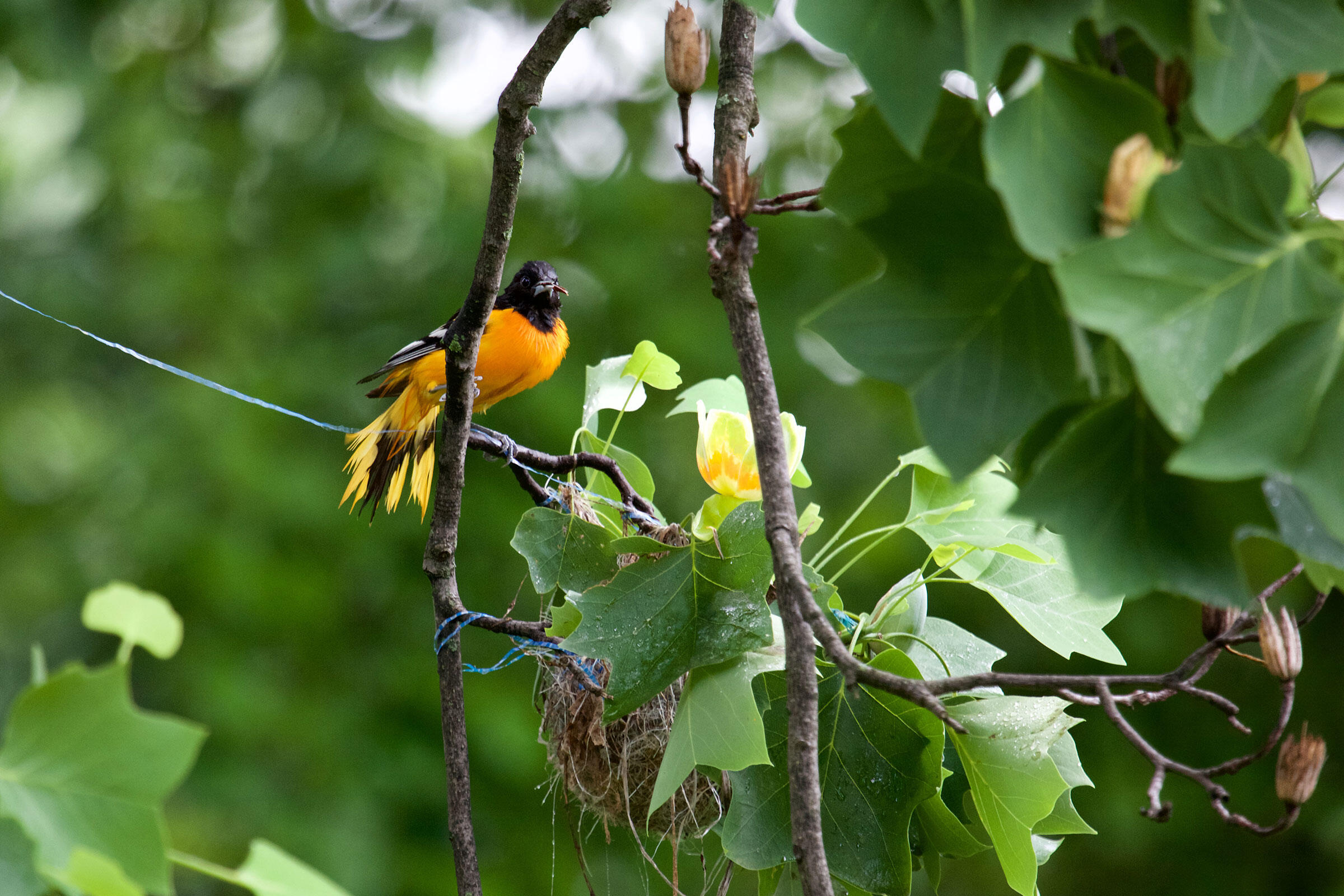 This Baltimore Oriole has chosen a tulip poplar—a common favorite among birds—for its artfully crafted hanging nest. One of the tallest eastern hardwoods, the tulip poplar is characterized by its long, straight trunk and its yellow tulip-like flowers that are especially attractive to hummingbirds. Native to the eastern U.S., the tree also serves as a larval host for many butterflies, including the eastern tiger swallowtail and the tulip tree silkmoth. In the autumn, the leaves turn golden yellow, inspiring this perennial's other commony known name, yellow poplar. 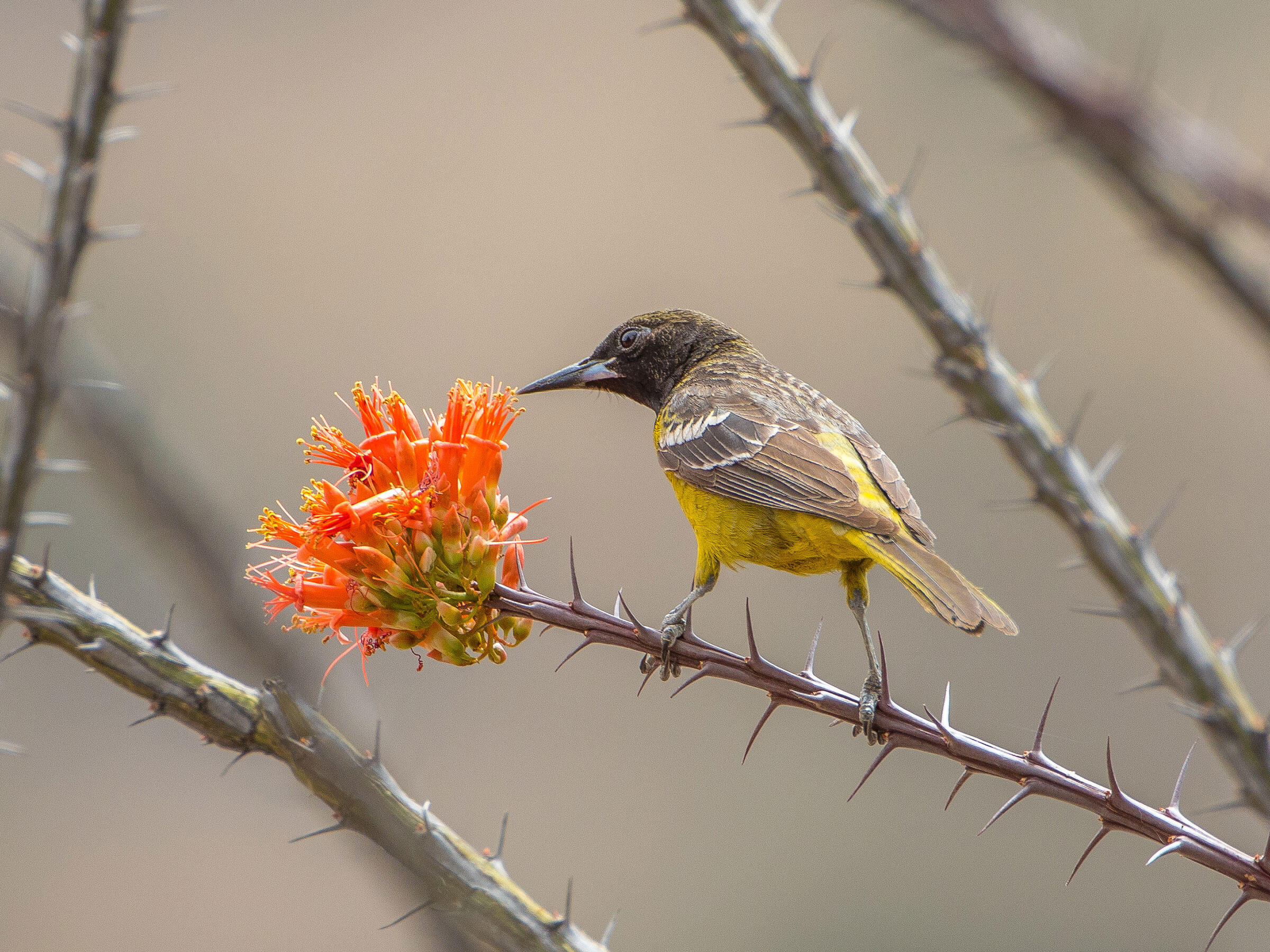 After tiptoeing around the sharp thorns of an ocotillo branch, a Scott’s Oriole finally reaches the sweet snack at the end. Despite its spiny branches, the ocotillo is popular with Scott’s Orioles as well as hummingbirds and native carpenter bees, all of which obtain nectar from the clusters of red tubular flowers that bloom from March to July. Native to southwestern U.S. and Mexico, ocotillo is drought deciduous, meaning it loses its leaves in the dry season, and grows in partial shade and dry, sandy, or rocky soils. 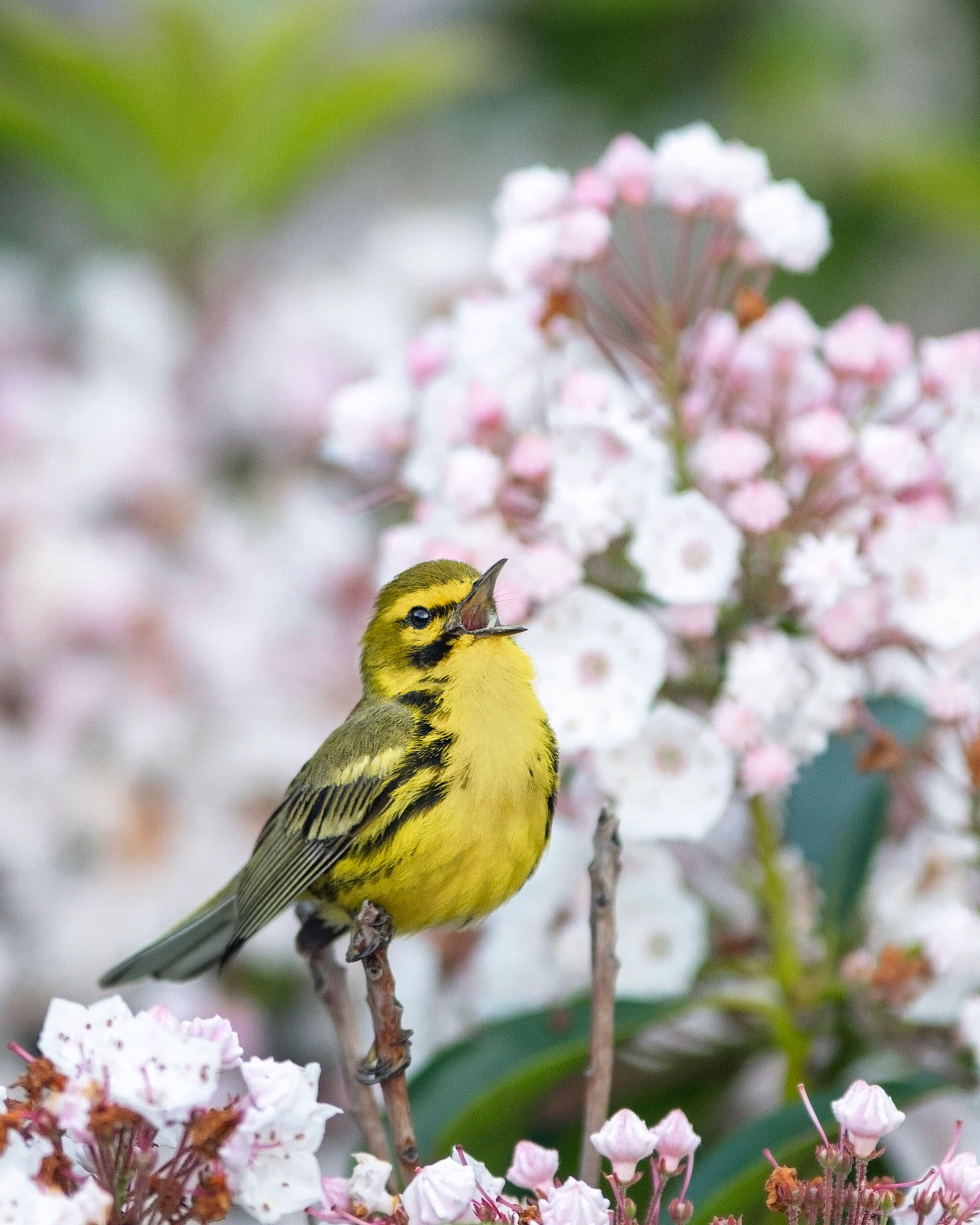 If ingested, the mountain laurel is poisonous to many animals, but certain songbirds, such as this Prairie Warbler, can consume the nectar from the flowers with no ill effects. Native to eastern North America, the mountain laurel spends late spring and early summer showing off its gorgeous pink blossoms. Since it is an evergreen, the shrub wears its leathery deep-green foliage all year round. 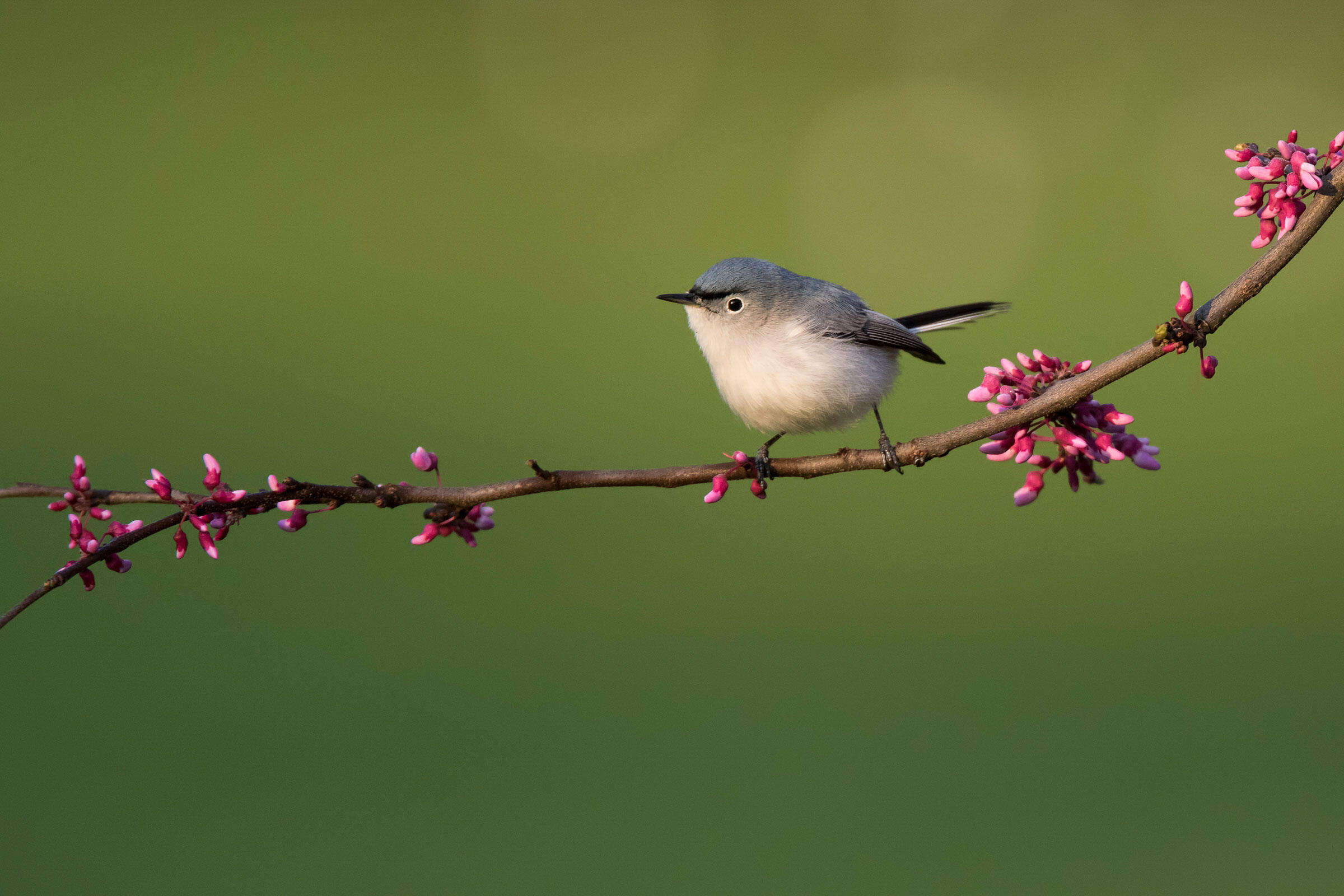 The subtle plumage of this tiny Blue-gray Gnatcatcher perfectly complements the eastern redbud’s bright pink flowers. Native to eastern North America, the redbud is a small tree that blooms profusely in early spring. Butterflies and hummingbirds are attracted to the flower nectar; honeybees use the blooms for pollen; bobwhite quail and squirrels eat the tree's seeds; and whitetail deer browse the foliage and twigs in the spring and summer. 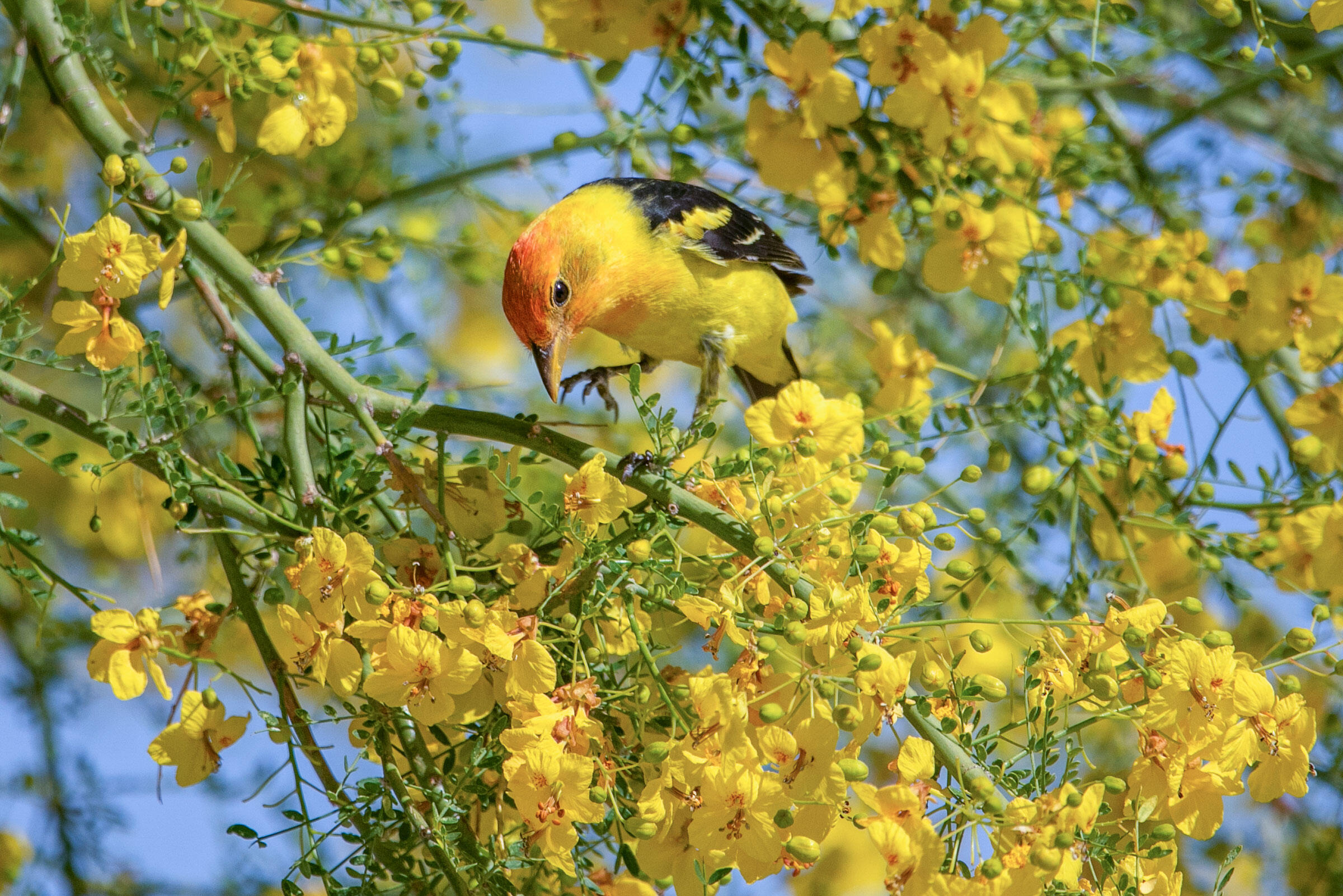 If it weren't for this Western Tanager's fiery head, there's a good chance you'd miss its yellow feathers amidst the flowery branches of the blue palo verde. The tree’s large canopy offers ample nesting and foraging opportunities for tanagers and other western species. Named after its blue-green wood, the blue palo verde also attracts pollinators with its flowers and birds and small mammals with its pea-like pods in the summer and fall. The drought-tolerant tree is native to Arizona, southern California, and northwestern Mexico. 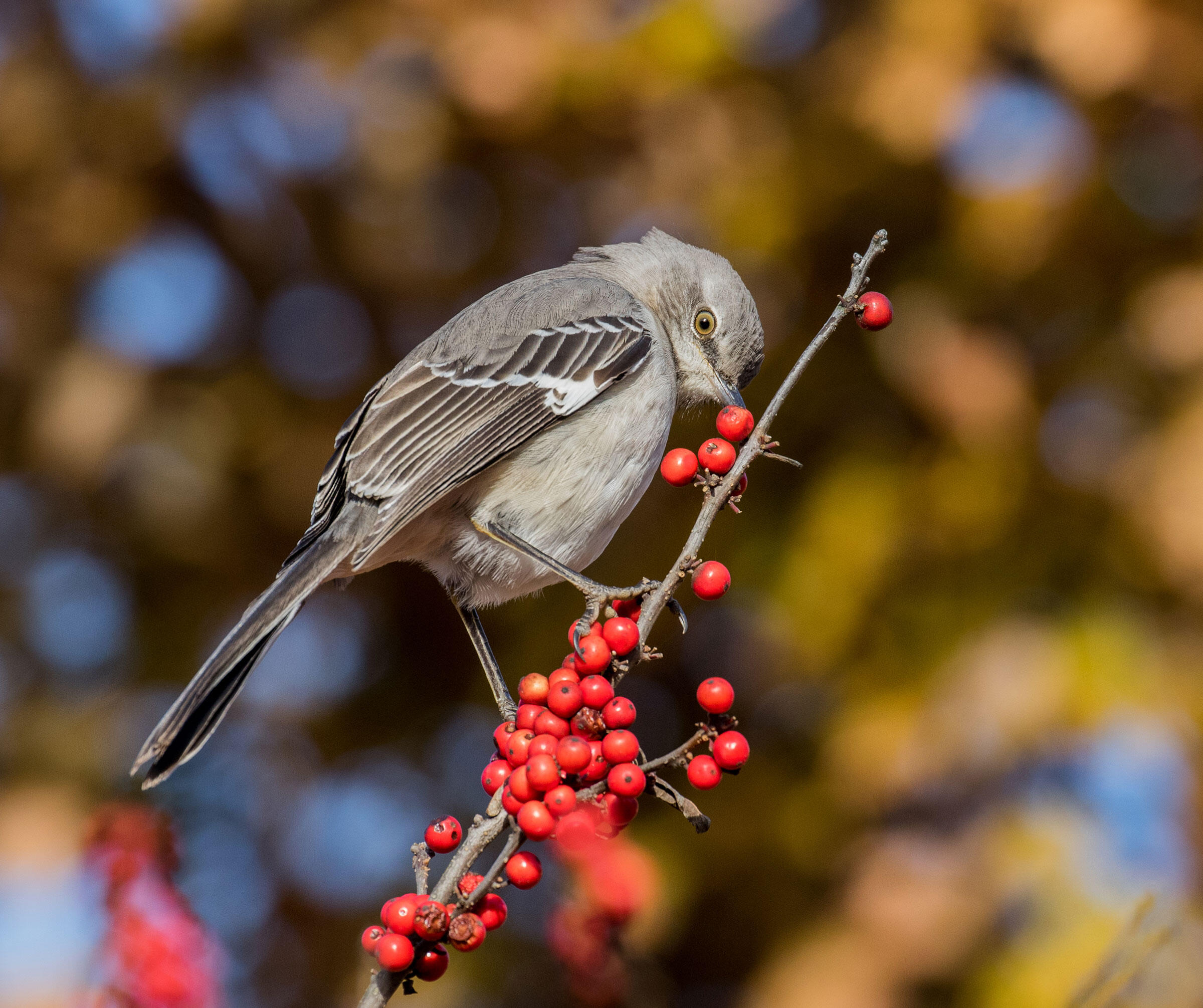 A lover of berries, the Northern Mockingbird can often be found plucking the fruit off of winterberry branches. Native to eastern North America, the winterberry is named after its clusters of bright red berries that persist throughout the winter season, providing a pop of color to the snowy landscape. The tree tolerates a variety of conditions, growing in full sun to shade, in dry to wet, sandy to clayey soils. Besides birds, the winterberry also attracts Henry's elfin by serving as a larval host for the butterfly. 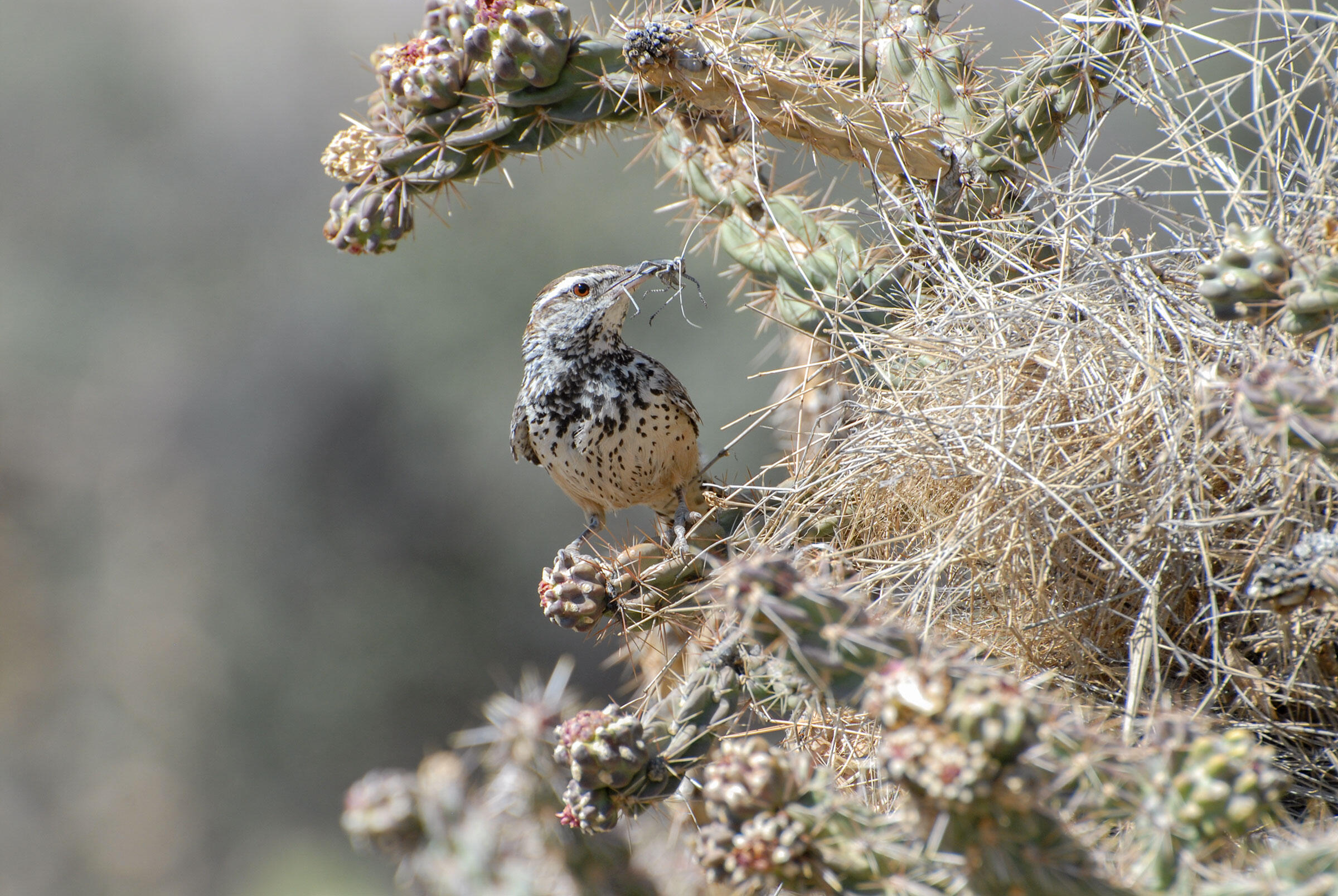 A staple of desert landscapes, a Cactus Wren has successfully captured its meal amidst the spikes of the prickly cane cholla. Often used as a nest site by the boisterous songbird, these thorny plants act as an escape for cover for many birds and other small animals. Native to the southwestern U.S., the cane cholla blooms vibrant violet flowers in the summer, which are followed by knobbly yellow-green fruit that stay on the plant until the following spring. 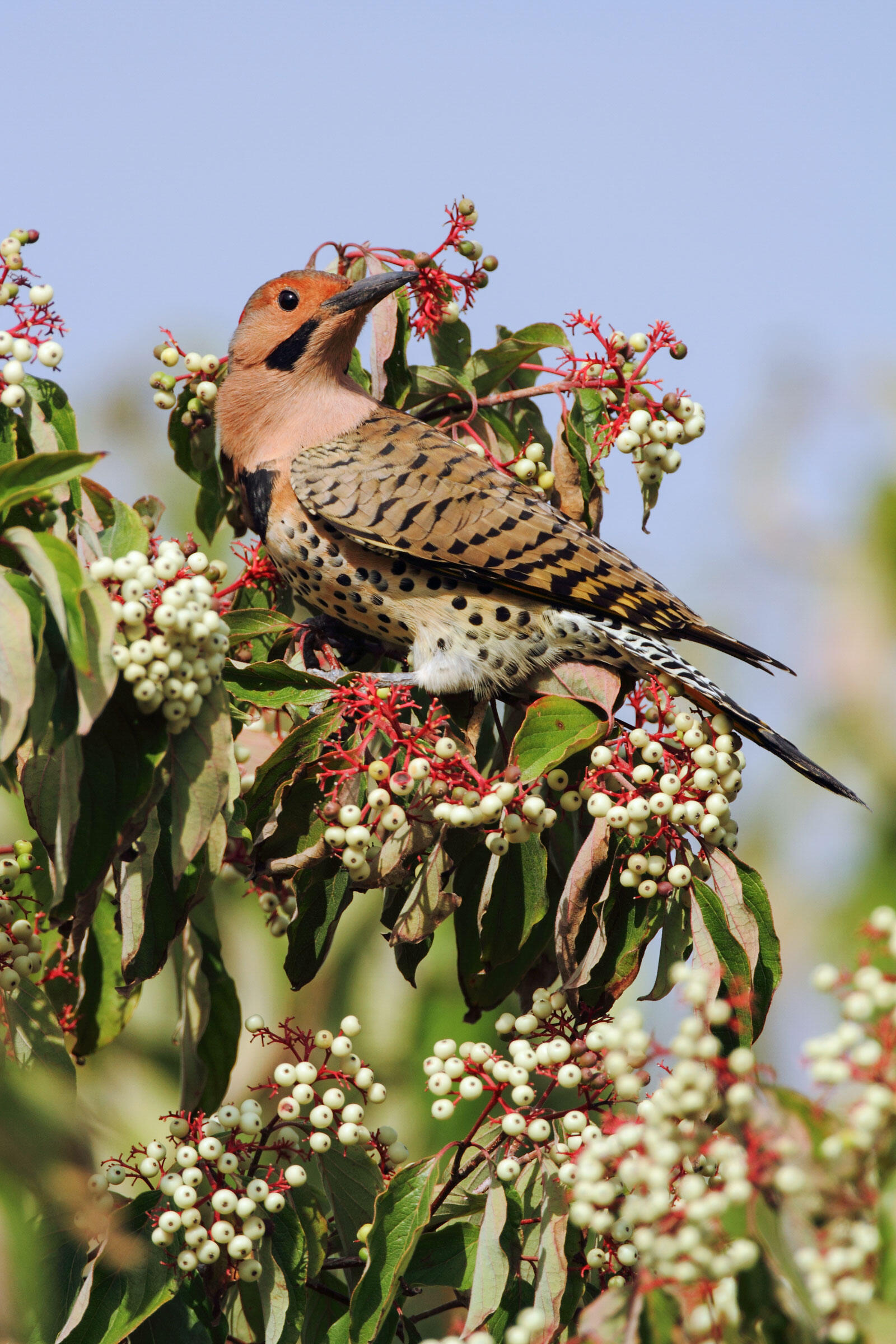 After the summer bloom of its tiny bell-shaped pink flowers, the common snowberry provides clusters of white-green berries for birds like Northern Flickers, as well as songbirds and gamebirds. Small mammals and browsers such as white-tailed deer and bighorn sheep also use this shrub for food and cover. The common snowberry is native to most of North America, ranging as far north as Alaska and Quebec and south to California and West Virginia. 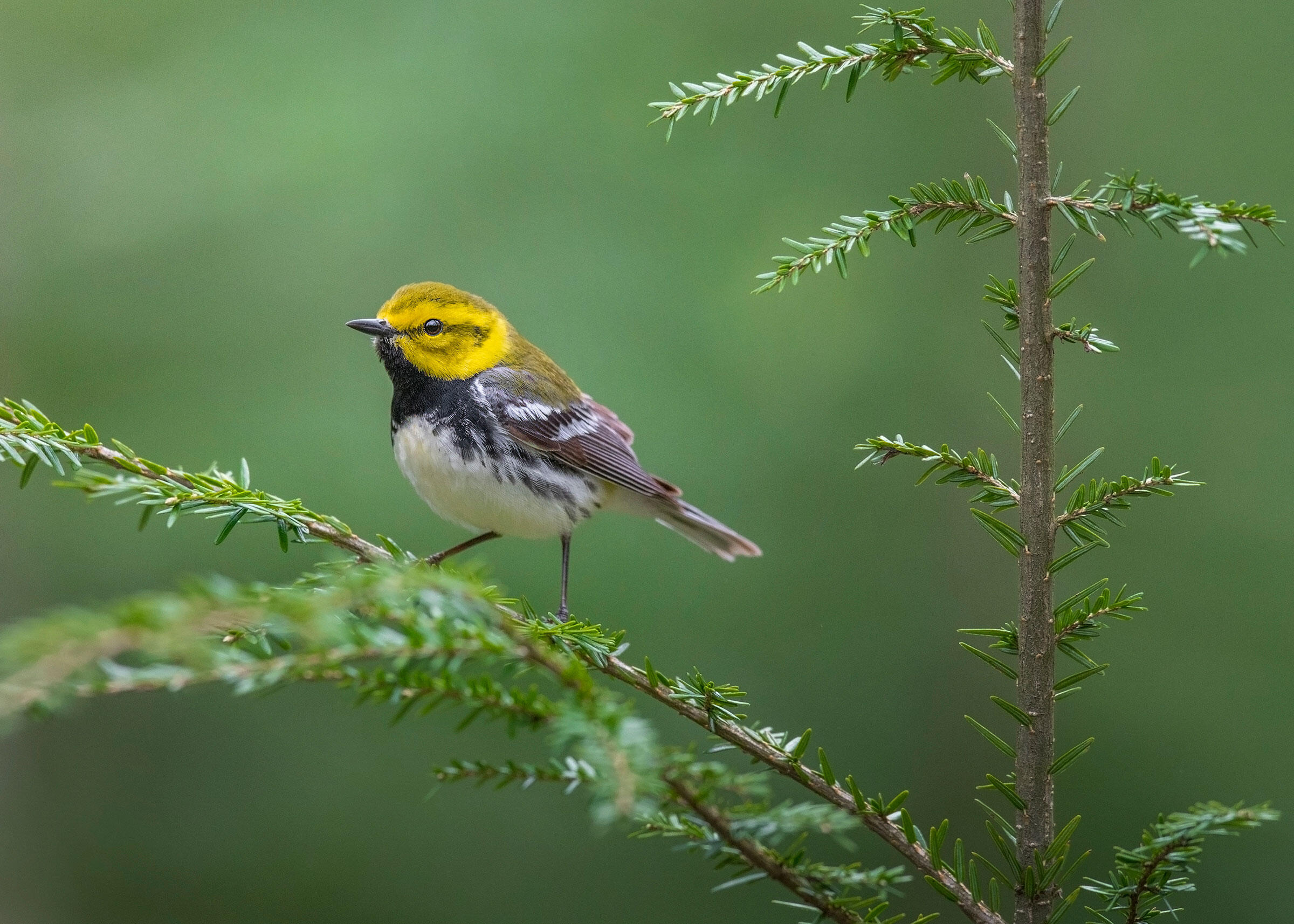 Characterized by its soft needles and small pendant-like cones, the eastern hemlock provides a shady habitat for many bird species, including the Black-throated Green Warbler. Native to eastern North America, this tall, perennial evergreen grows best in cool, humid climates with moist and rocky soils. Its numbers, however, can be seriously threatened by the sap-sucking hemlock woolly adelgid pest that is native to East Asia. 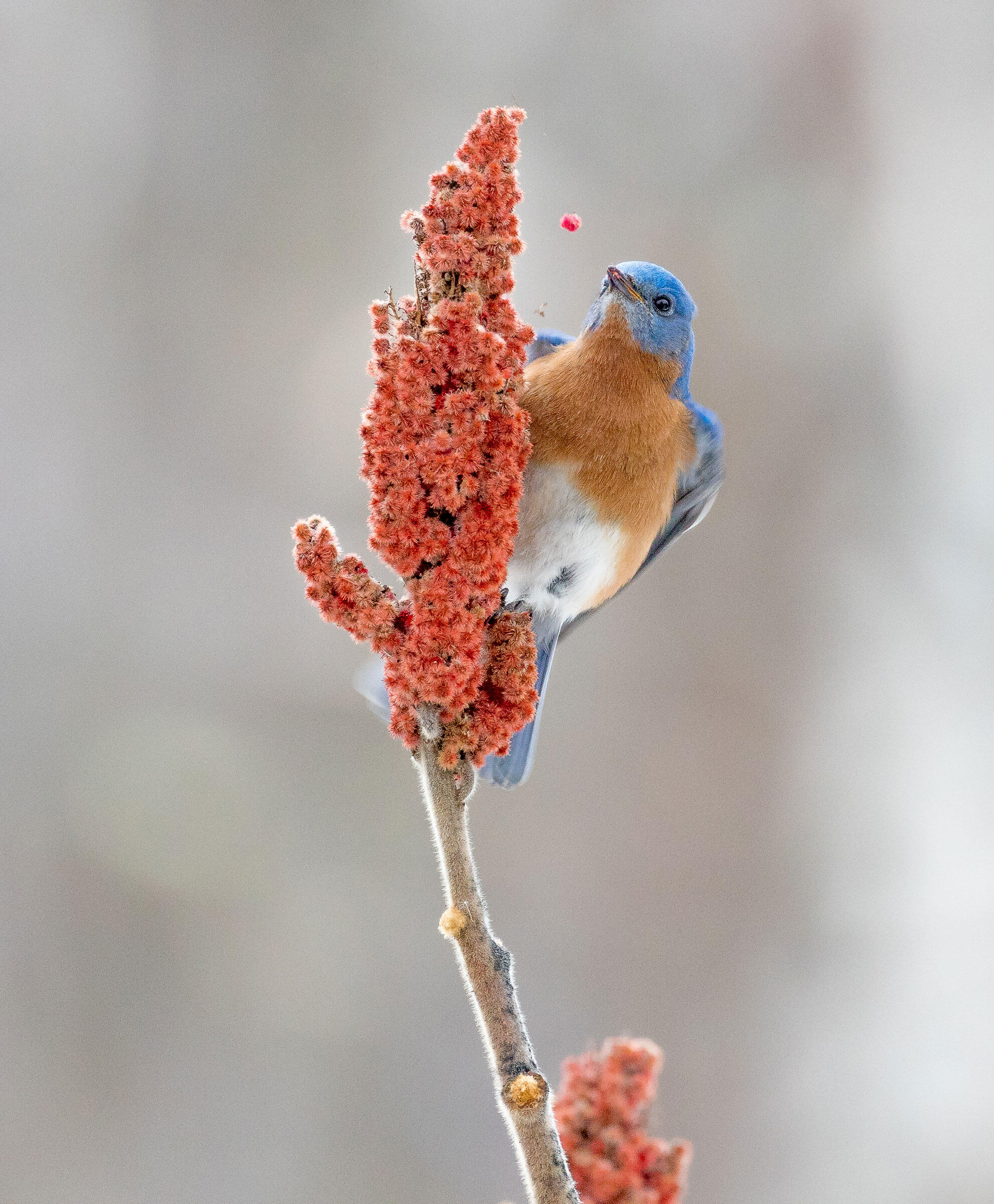 One berry at a time, this Eastern Bluebird relishes in the feast provided by the staghorn sumac. On female plants, yellow-green flowers transform into upright clusters of fuzzy red berries that persist throughout winter and are highly appealing to a variety of bird species. These drought-tolerant perennial shrubs are native to eastern North America. 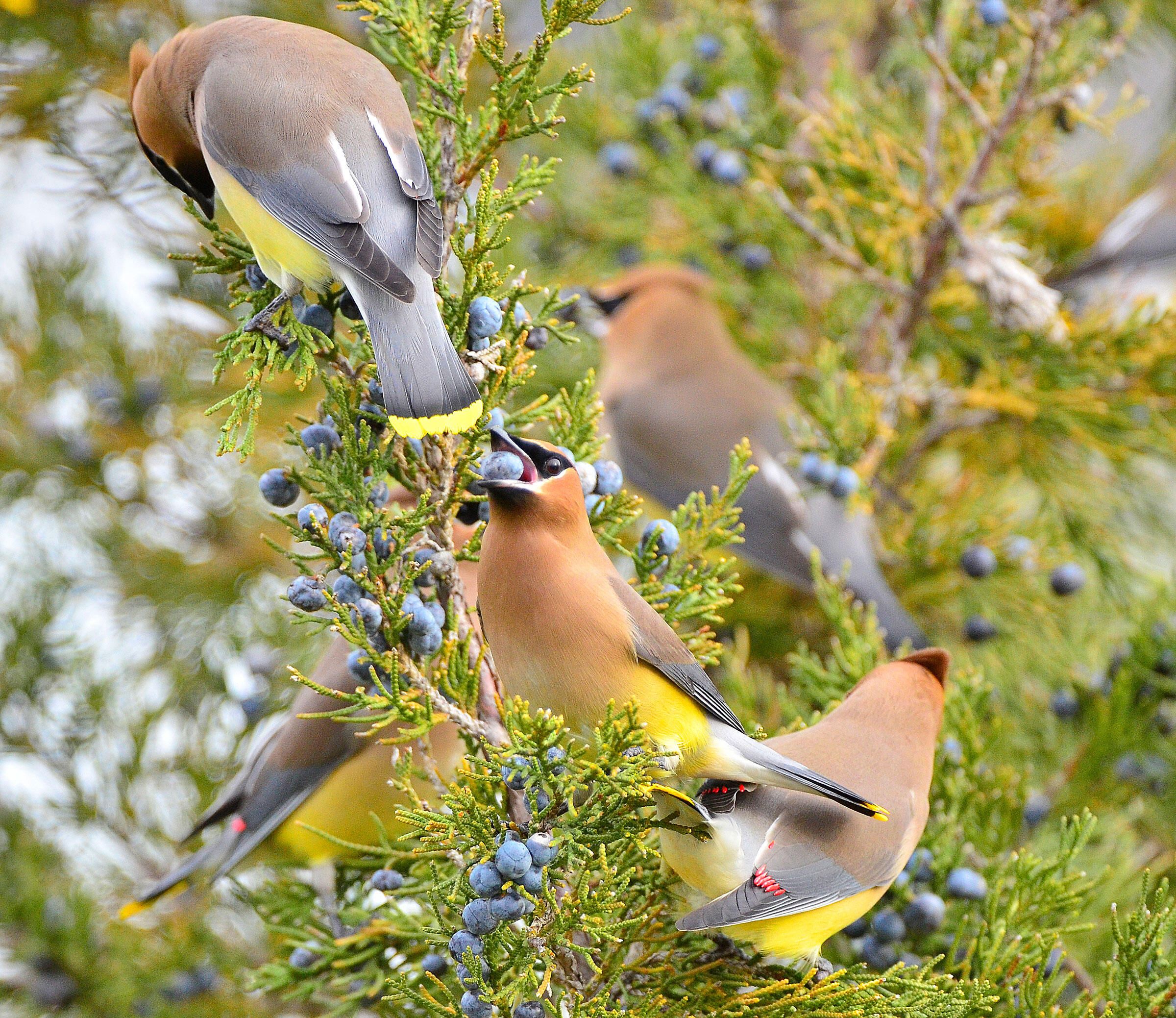 These Cedar Waxwings could very well be getting a little tipsy by indulging in the blue berries of the eastern redcedar. When overwintered berries thaw, the sugars within can ferment and cause birds who consume them to become intoxicated. Other than Cedar Waxwings, birds such as sparrows, American Robins, Northern Mockingbirds, and various warblers also benefit from this evergreen tree by nesting and roosting in its foliage. Native to eastern and central North America, the eastern redcedar is the most widely distributed eastern conifer, and is resistant to extremes of drought, heat, and cold.

Freebie alert! Don't know a Cedar Waxwing from a Bohemian Waxwing? Download our Audubon bird guide app to learn more about both species.