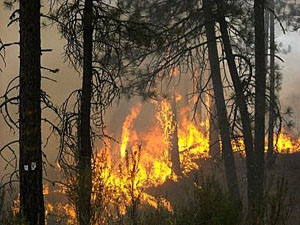 It’s official. We’re going to be seeing a lot more wildfires in the coming years, and they’re going to be a lot hotter. A study released last Wednesday concluded that the over-the-top fire season that we’ve seen this year may soon be the new normal.

The study, conducted by the nonprofit research organization Climate Central, analyzed 42 years of U.S. Forest Service records for 11 Western states. Their findings are stark: the number of large forest fires has increased dramatically over the years—on average, wildfires burn twice as much land area as they did 40 years go and the fire season lasts two and a half months longer.

Global warming is expected intensify dry, hot conditions, which exacerbate fires. As summers heat up in the West and as droughts grow longer, wildfires are expected to become more and more frequent.

"This is a clear illustration of the longer fire seasons that we now have," said Steven Running, a professor in the University of Montana's College of Forestry and Conservation, in an interview with E&E reporters. "We have a landscape that's vulnerable for a longer period of time. All it takes is an ignition source, and off to the races you go."

Perhaps more worrisome are the possibility of megafires—fires that burn upward of 10,000 acres or more. Compared to an average year in the 1970s, these types of fires have increased sevenfold.

Dan Glick reported on mega-fires for Audubon in “The Perfect Firestorm":

During the past two decades record-setting blazes have occurred around the world, from Russia to Indonesia, Alaska to Brazil. These “megafires” exceed all efforts to control them, says Jerry Williams, who retired as the U.S. Forest Service’s top fire manager in 2005 and is now a Missoula-based fire adviser. Some of the blazes burn through more than a million acres. Embers launched from crown fire flames can reach two and a half times as high as the burning tree, starting fires up to two miles ahead of the fire front. Flaming debris can strike planes, grounding tanker pilots.

U.S. policy has pitted a deeply ingrained institutional belief that some wildfires can and should be “fought” against a scientific consensus that they are ecologically indispensable. Global warming has kindled the debate further because it has created both hotter and drier conditions in many places. In addition, a legacy of all-too-successful suppression means that many forests now contain huge “fuel stores” of woody debris that periodic fires used to eliminate. Add the fact that droves of people have moved into fire-prone areas, and you have an increasingly combustible mix of policy and ecology. “Megafires are signaling a new era in fire and land-use management,” says Williams.

Wildfires have already burned more than 8.6 million acres and have claimed several lives this year. With two months left in the fire season, this year could turn out to be the worst yet.

Are Raging Blazes in New Mexico, Colorado a Sign of What's to Come This Fire Season?