Early this year scientists reported that they’d found a previously unknown reef off the coast of Puerto Rico. From all reports, it’s a healthy reef, teeming with bright-turquoise sea squirts, colorful sponges, various fish, and a multitude of other marine life. The discovery gives researchers hope that this thriving ecosystem might help replenish the island’s depleted reefs.

The reef, which is 12-miles long, was only found recently because it’s so deep—some 100 to 330 feet beneath the surface.

Such mesophotic ecosystems (‘meso’ for middle and ‘photic’ for light) are the deepest of the light-dependent corals, according to NOAA, which funded the study. Because they’re too deep to reach with traditional scuba gear, they were largely uncharted territory until recent advances were made in diving techniques. 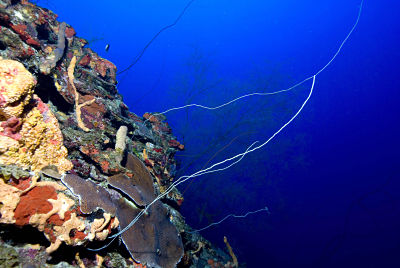 The researchers that glimpsed the mysterious landscape were wowed by the abundant biodiversity. They saw various corals, red, orange, and brown sponges, and fish, including groupers, snappers, and reef sharks.

“We had no idea how extensive, vibrant, and diverse these mesophotic coral ecosystems are off La Parguera,” says Richard Appeldoorn, lead principal investigator at the University of Puerto Rico, Mayaguez

“These reefs stand in stark contrast to declining shallow water reefs in the same area,” says Kimberly Puglise, of NOAA’s Center for Sponsored Coastal Ocean Research. Because of their potential to restore depleted fish stocks, local managers are looking carefully at adding protections for these coral ecosystems, NOAA reports.

Officials in Puerto Rico and the U.S. Virgin Islands have already been working to create the Caribbean Regional Partnership, which aims to better manage coastal water use and to implement conservation programs.

“The two islands recently submitted a proposal for the partnership to NOAA,” the AP reports. “Among the partnership's proposed goals is the creation of a zoning map for waters surrounding Puerto Rico and the U.S. Virgin Islands. The map would designate certain areas for conservation, recreation or commercial purposes. The project also would allow researchers to explore how the ocean could be harnessed for energy or for the development of fish farms or the installation of underwater fiber-optic cables.”

The waters off Puerto Rico aren’t the only ones home to mesophotic reefs. A companion project is investigating similar deep coral ecosystems off the coast of Hawaii.