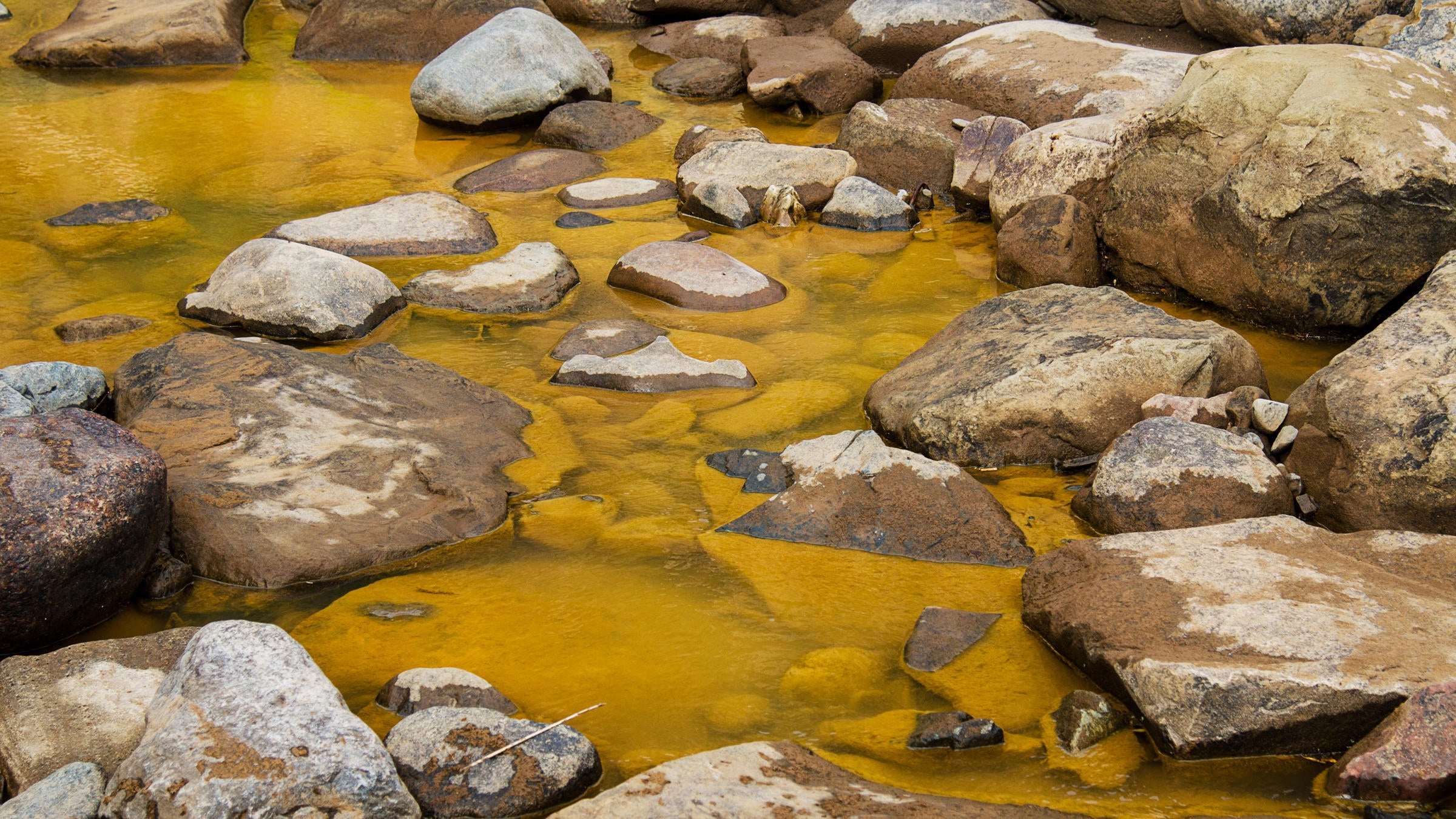 No Birdsong Near Abandoned Colorado Mines

Last week, the country watched in horror as 3 million gallons of mine wastewater, an unstoppable mustard-colored deluge, flowed down Colorado's Animas River. It began on the morning of August 4th when Environmental Protection Agency employees accidentally set off the torrent of acidic arsenic- and lead-laden wastewater from Gold King Mine in Silverton, Colorado. Officials reopened the river for recreation and irrigation on August 15th, and the EPA reports that water quality has returned to pre-spill levels.

The Gold King Mine spill is a dramatic visualization of an ongoing problem. In the Colorado Rockies, some 7,300 abandoned mines have leached acidic and heavy metal-laden water into local waterways for a century. The leaching is the result of ongoing chemical reactions in the mines, which occur when water pools in the leftover holes and tunnels. The combination of water, oxygen and pyrite—a mineral commonly found alongside gold—reacts to form sulfuric acid, which dissolves other minerals from the rock, including arsenic and lead. And acid-loving bacteria thrive in the pools, where they speed up the chemical reactions.

Once the chemicals leach out, the environmental effects are threefold, says Diane McKnight of the University of Colorado. Sulfuric acid makes the water more acidic, sometimes as acidic as lemon juice or stomach acid. Iron coats the streambed and stains it orange. And potentially toxic heavy metals like mercury, lead, cadmium and zinc are carried downstream. In the most heavily polluted streams, algae fails to grow on the iron-slathered rock and few species of larval insects or other macroinvertebrates can survive, she says. "It's very common that, in some of these headwater tributaries, there are no fish until you get downstream where the metals have been diluted."

"There are thousands and thousands of kilometers of mine drainage streams in Colorado alone," says McKnight, who has studied the issue for nearly 35 years. “There's lots of water that has accumulated in abandoned mine workings that can trickle out or have a blowout.”

The EPA has faced criticism for the mistake, and while last week’s accident was the result of human error, McKnight warns that “it doesn’t take a human intervention to make that happen.”

In some mine drainage areas, like around Peru Creek, a lifeless mine drainage stream 100 miles northeast of Gold King Mine, not even the hardiest larval insects can survive an aquatic youth in an acid drainage stream. No young insects means no adult insects—which means that insect-eating birds are forced to eat elsewhere.

But even places with plenty of bugs might have other problems. In one study, done at three streams near Peru Creek, researchers analyzed metal and element levels in aquatic insects and the nestlings of swallows and chickadees nearby. Perhaps unsurprisingly, the insects had higher levels of the elements produced by mining, and the birds that ate those insects did, too. There was enough lead in the birds' systems to induce low-level, non-fatal lead poisoning.

"It's an example of an ecosystem-level consequence that had not been considered or that people weren't aware of before," says McKnight.

It’s possible to remediate abandoned mine sites so they don’t leach toxic chemicals. When the EPA set off the Gold King Mine spill, they were preparing to seal off two nearby mines with an enormous concrete plug, which is one way to remediate. The plug keeps water and oxygen out so that acid doesn't form in the first place. Another solution is to add chemicals to mine outflow that dually reduces its acidity and causes dissolved metals to settle out in solid form so that they can be collected. (Somewhat ironically, the EPA has tried to expedite remediation of the Gold King Mine since the 1990s, but local residents resisted to avoid scaring tourists.)

Now that the entire country is watching, they may not be able to resist any longer. If remediation does occur, the presence of a certain bird species, Tree Swallows, could help ecologists gauge whether the environment is recovering, says McKnight. Tree Swallows in particular tend to be good sentinels—species that can represent the state of an entire ecosystem. If the swallows can make it, you know that lower levels of the food chain can, too.

"Maybe that's another target for a remediation goal," she says. "If the tree swallows come back in 15 years, that would be a success."