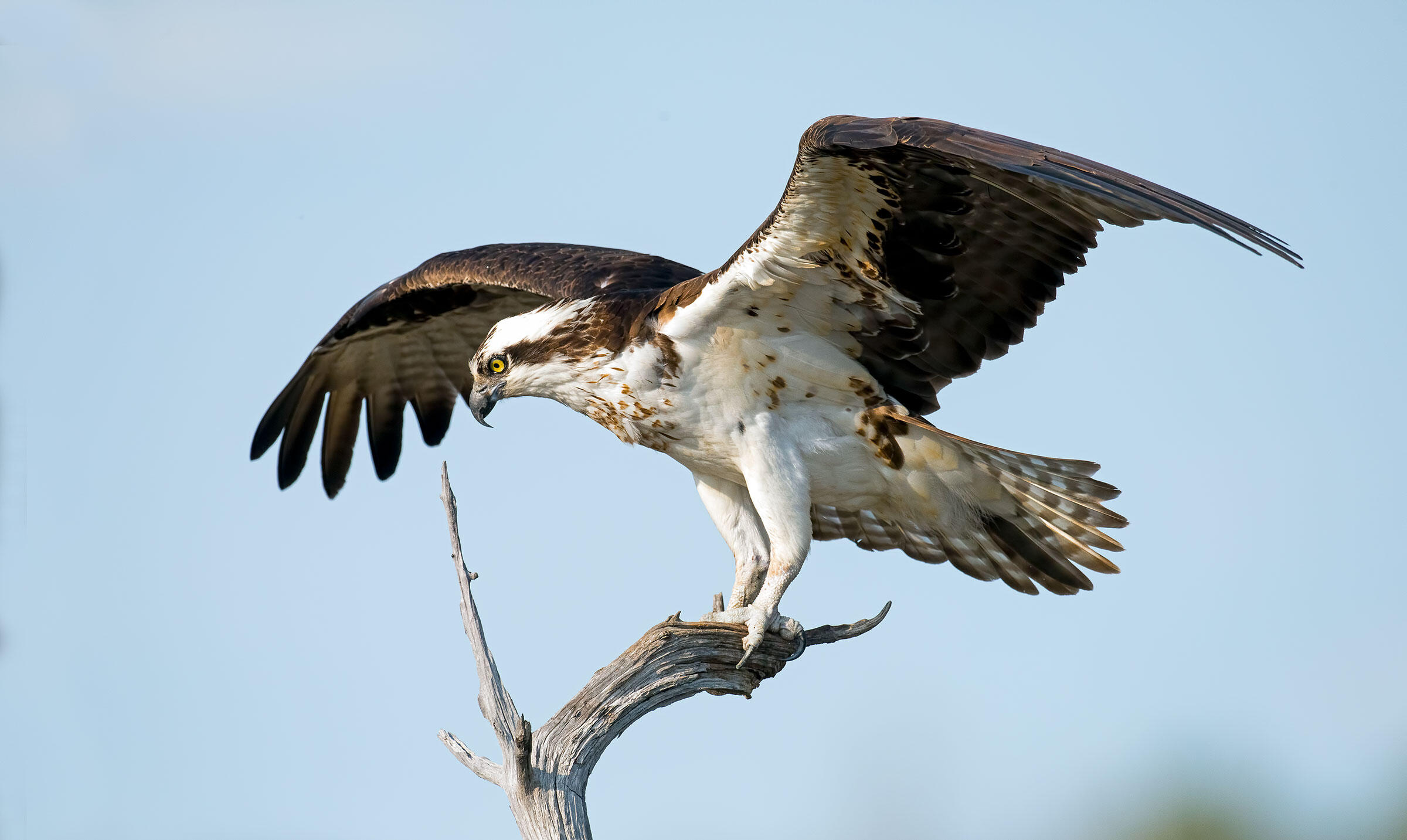 Forty years ago the Osprey was considered an endangered species in New Jersey. Today, thanks to better environmental regulations and human-made nesting structures, it turns up often on coastal birding lists. Photo: Brian Kushner

The “fish hawk” is an early sign of spring—and a conservation ideal.

It’s 11 a.m. April 1, 2018, Easter Sunday, with overcast skies, west winds, and temperatures in the 50s. The pious residents of Mauricetown, New Jersey, are filing into the Methodist church to celebrate renewal, rebirth, and a rite of spring.

High over the steeple, its wings held in benediction, is one of our 10 resident Ospreys, newly returned from a six-month exile in the Amazon Basin. The bird is eager to get on with the serious business of courtship, mating, and the rearing of young. By August the nestlings must be ready to migrate and carry on the important work of reigning over the food chain.

As a student of birds, I find the Osprey’s return affirming. But there was a time, not many years ago, that the species’ future was anything but assured. Like Bald Eagle and Peregrine Falcon populations, the “fish hawks” were suppressed from hatching eggs by the insecticide DDT half a century earlier. In fact, so dire was the plight of this large, handsome bird of prey that it was declared an endangered species in New Jersey. The bird’s dramatic decline was documented by Roger Tory Peterson, who saw the number of active Osprey nests in the colony near his home in Old Lyme, Connecticut, go from 150 in 1954 to just 17 a decade later. Concerned, the eminent ornithologist wrote in an essay, “One year soon, I fear I shall find no Ospreys at Great Island—not one.” I and many other birders shared Peterson’s gloomy prediction that North America’s Ospreys were doomed.

It wasn’t until 1972 that the sale and use of DDT was banned and Ospreys began their slow return. In 1975, the average number counted per day at Hawk Mountain, Pennsylvania, was a meager five birds. Those of us who gathered on the North Lookout feasted on every golden-eyed bird—a sign that there was yet hope for the species. Imagine my delight when a year later in Cape May, New Jersey, I was recording Ospreys at a rate of 20 birds per hour during migration. That average is now approaching 40 birds per hour. In fact, Cape May’s 2016 total of 4,250 birds was 52 percent higher than the 10-year average at the turn of the century.

While the Osprey’s resurgence appears to have peaked somewhere between 1990 and 2000, they continue to flourish.

Federal, state, and private agencies have also helped spur the raptor’s recovery by erecting artificial nest platforms and engaging in active reintroduction. It bears mention that Ospreys are a resourceful species, able to conform to human activity better than most birds of prey. While widespread across North America, they’re concentrated in particular regions, most notably along the Atlantic Coast, Florida, the Great Lakes, the Pacific Northwest, and Northern Rocky Mountains.

While the Osprey’s resurgence appears to have peaked somewhere between 1990 and 2000, they continue to flourish. In New Jersey, they produce an average of 1.78 chicks per nest. Where I live on the Maurice River, that rate is closer to two birds per nest—more than twice the threshold needed to maintain a healthy population. This is not only a testimony to the reduction of DDT, but also to the improved productivity of the Delaware Bay ecosystem. I dare say that Osprey numbers on the bayshore are as healthy now as they were when Alexander Wilson visited here in the early 1800s.

In this gloomy age, with our environment being assailed on so many fronts, it’s worth remembering the lesson of the Osprey. Its near miraculous recovery invites optimism and dedication to the challenges that lie ahead. One such case is the American Kestrel, our smallest raptor, which is currently experiencing a population decline as catastrophic as the Peregrine’s in the 1950s.

In the face of mounting concern over mosquito-borne illness, I’ve heard some media commentators encourage the renewed use of DDT. So, even as I celebrate the rise of the Osprey, I’m ever mindful that we are but a single bad decision away from disaster.

Pete Dunne is a prolific writer (with Audubon and beyond), hawk watcher, and expert on New Jersey wildlife. As former director of the Cape May Bird Observatory, he hatched the high-stakes World Series of Birding.