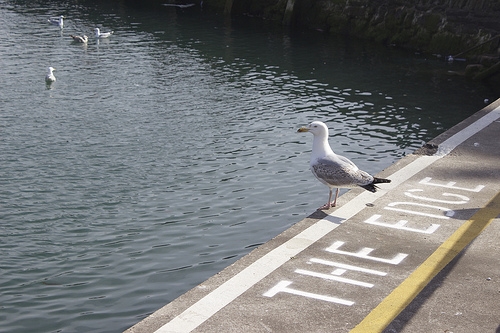 Gulls have been known to eat everything from french fries to garbage. And now they’re chowing down on whales—while they’re still alive. This past week the Argentinean government unveiled its plan to shoot the birds as they feast on the whales that flock to South American waters.

“It’s not just that the gulls are attacking the whales, but that they’re feeding on them,” said Marcelo Bertelloti, a worker for the National Patagonia Centre, in an interview with the Guardian. “This way of feeding is a habit that is growing and becoming more frequent.”

The disturbing behavior takes place when a whale surfaces for air. A gull will swoop down and land on its back, pecking at it repeatedly so that an open wound forms. Then, the gull waits. When the whale surfaces again, the bird lands and feeds on the blubber that it can reach from the wound.

It’s not hard to imagine that this is bad for the whales—especially an endangered species like the southern right whale. This particular cetacean travels to Argentinean waters to give birth. Whale watchers flock to the country to see the creatures—and now they could be in store for a sort of horror show.

In the past, there were only a few incidences of gulls attacking whales. Now, the behavior has spread. Gulls have learned from one another that whales are a viable food source and have begun to exploit them. In addition, the growth of the country’s population and consequently, its refuse, has allowed the gull population to explode. Since cetacean feasting is a learned behavior, Argentinean officials hope that by using firearms they will “teach” the seagulls to think twice before munching on some blubber.