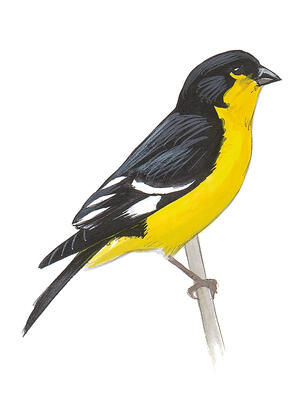 Hey there gramps! Two weeks ago the MAPS banding team at the Audubon Starr Ranch in Trabuco Canyon, California, caught a senior citizen in its nets. The Lesser Goldfinch is a common species in the southwest United States, and on one day in June, ranch volunteers caught seven of them. One finch of the bunch was special: When ornithologist Holly Garrod checked its band number with her records, she realized that it had been labeled as an adult back in 2009, making it at least 7 years old. (Lesser Goldfinches reach adulthood within a year.) That’s more than two years older than the previous known record from 1960. What’s even more surprising is that despite its stiff age, this bird is probably picking up mates left and right. By inspecting its cloaca Garrod says that she could tell that it was ready to breed.

Here’s Garrod’s take on the exciting encounter (first published on the “Audublog”):

One of the most valuable parts of bird banding are the recaptures. Every time after a banding session I go back to the records and look up the recaptures we got to get an idea when they were first banded and how many other times we’ve recaptured them. On our June 27 MAPS day we recaptured a good looking male Lesser Goldfinch. Later I looked up the band number and found we had banded it at Starr Ranch in 2009 and at that time it was aged as an adult. That made this bird at least 7 years old. According to the Cornell website and banding lab records, the oldest known Lesser Goldfinch was 5 years and 8 months old (banded in 1960 no less!). Looks like our Starr Ranch Lesser Goldfinch just smashed the record for being the oldest Lesser Goldfinch recorded.

To give you an idea, a Lesser Goldfinch is about 4 inches in length and takes our smallest band size. Like many smaller birds, Lesser Goldfinches face many challenges and often the probability of survival within the first year is low. Further being a smaller bird, it’s been assumed that their life span is probably fairly short. What’s really neat to see is how banding data has changed our idea of how long these birds live. It’s incredible to think that a tiny Lesser Goldfinch is at least 7 years old! Banding data has really supplemented our understanding of bird ecology, providing us with information we previously wouldn’t have known.

Correction: The black-backed variant of the Lesser Goldfinch is not commonly seen in California, as an earlier version of this article stated.