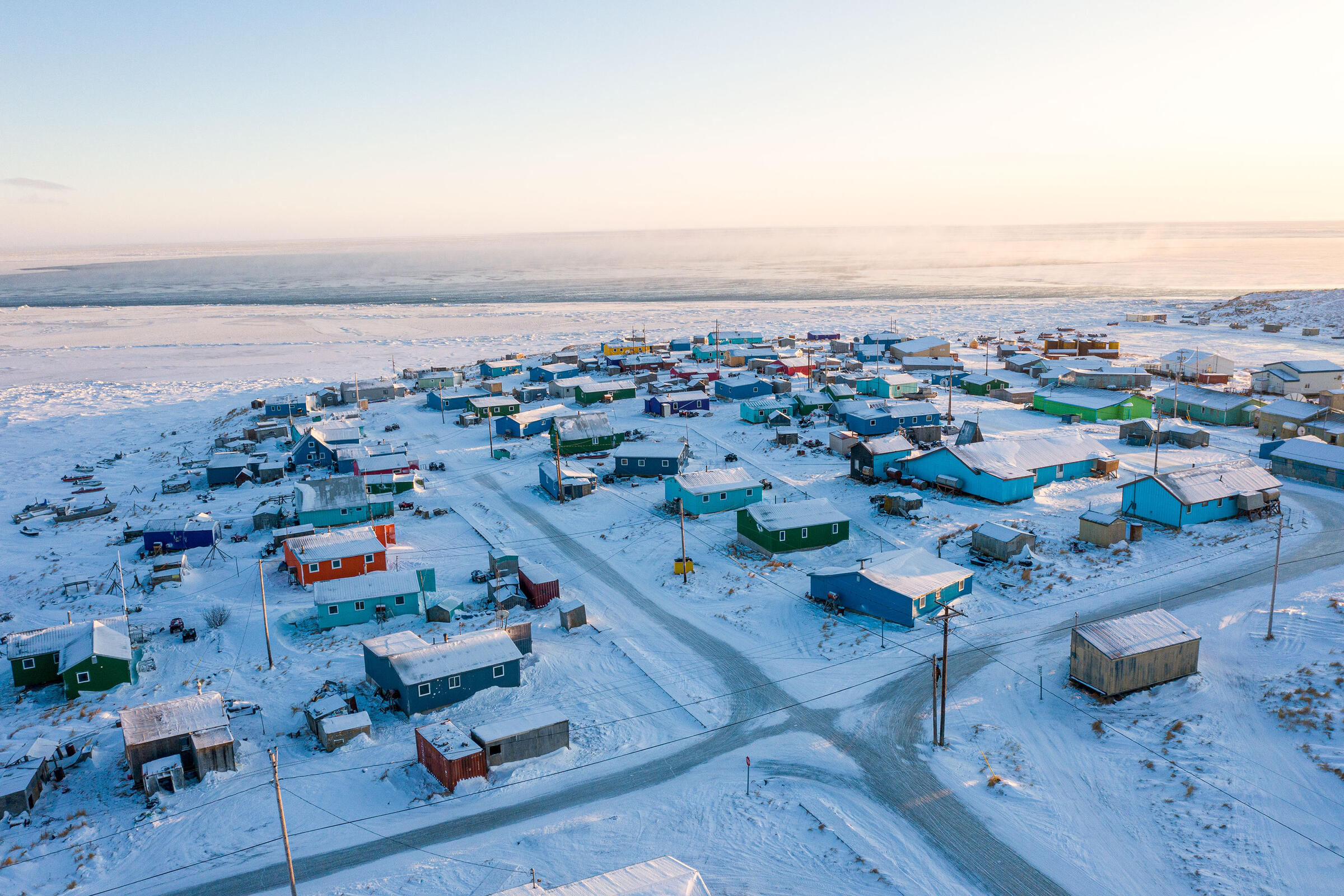 One hundred years later, in 2018, Dull flew 500 miles from Nightmute, a village near the Bering Sea, to Anchorage. There, she huddled with a few representatives from Calista Education and Culture, Inc. (CECI), an Alaska Native nonprofit that aims to revitalize the region’s Indigenous cultures by creating educational programs based on interviews with Yup’ik, Cup’ik, and Athabascan Elders.

As her stories of Yup’ik life unspooled, Dull told the interviewers how she used to tan bird skins and sew them into clothing. And she mentioned how, as a newborn, she was kept cozy and warm by an atasuaq, a tiny one-piece parka her mother had sewn from bird skins with the feathers facing inward. Dull later swaddled her own children in the same garment.

“Now people don’t make atasuaq anymore,” Dull says through an interpreter in her native language of Yugtun. “They only have coats. But we Elders have atasuaq and piluuguk [regalia], which are of the Yup’ik people.”

The mention of this bird-skin baby parka grabbed the attention of Dull’s interviewers, including Ann Fienup-Riordan, a white cultural anthropologist who works for CECI. “When she talked about it, I was floored,” she says. Fienup-Riordan has studied Yup’ik culture for decades, and doesn’t recall ever seeing an atasuaq in museum collections or in her research. Dull’s story gave the anthropologist an idea: What if she, along with a group of Yup’ik women, learned how to make one of the parkas using Dull’s memories for guidance?

And so last year, using a National Science Foundation grant for research on Yup’ik relationships with animals, Fienup-Riordan and others from CECI flew to the coastal village of Toksook Bay, near Nightmute, to learn how to sew an atasuaq. By all accounts, the parka they made together wasn’t perfect. But after decades in which this skill lived only in the memories of a few, this atasuaq, perhaps the first sewn in nearly a century, is a potent symbol of renewal and resilience in a culture that has depended on migratory birds for millennia.

A gift in hard times

Since time out of mind, Yup’ik hunters on the coast of western Alaska watched for the first migratory birds to arrive in spring. The annual return of migrants like geese and eiders was crucial for the Yup’ik and other Alaska Native groups because they arrived when winter’s food supplies were depleted, providing a nutritional bridge to summer’s bounty.

“During hard times, they were there,” says Yup’ik Elder Mark John, who grew up in Toksook Bay. “Animals, such as birds, provide themselves to our people to be used in a way that we need them,” he adds. “We didn't have material from the Western world. They provided all that we need.”

This was the way of life for the semi-nomadic Yup’ik for millennia.

This was the way of life for the semi-nomadic Yup’ik for millennia until government policies made it difficult to maintain. For example, in 1918, the United States passed the Migratory Bird Treaty Act (MBTA) to stop commercial hunting that was devastating avian populations. While the law was remarkably successful and is credited with preventing the extinction of several species, its prohibition on hunting birds or harvesting their eggs from March to September also cut off Alaska Natives from one of their most important subsistence resources during the spring. While Indigenous people could still hunt migratory birds in the fall, some birds were only available in spring across parts of Alaska, when they were more important for Native food security. As these restrictions were straining tribal nations’ ancestral hunting practices, Western food, clothing, and diapers also became more accessible in their remote villages, further eroding their traditions.

In response, Alaska Native leaders spent decades lobbying government officials for the right to continue their spring hunting practices. In the meantime, many had to resort to hunting illegally to feed their communities; Fienup-Riordan remembers visiting Toksook Bay in spring during the 1970s and seeing women hide their bird-skin sewing when government officials visited.

Patching a tradition back together

Finally, in 1997, Congress amended the MBTA to allow Alaska Native groups to hunt spring migratory birds; the first subsistence harvest was in 2003. The amendment also created a council through which Native communities co-manage the spring migratory bird harvest with state and federal wildlife agencies. And in 2018, the Alaska Department of Fish and Game and the U.S. Fish and Wildlife Service jointly apologized for how the MBTA impaired Alaska Native hunters’ ability to provide for their communities. “Our predecessors’ regulations were shortsighted in that they caused long term and unnecessary pain,” the agencies wrote in a formal apology letter. “We ask for your forgiveness as we continue our journey for healing together.”

With the spring harvest no longer illegal, a hunter from the village of Chefornak was able to donate skins of qengaallek, or King Eider, and allgiar, or Long-tailed Duck, for last year’s atasuaq-sewing workshop. 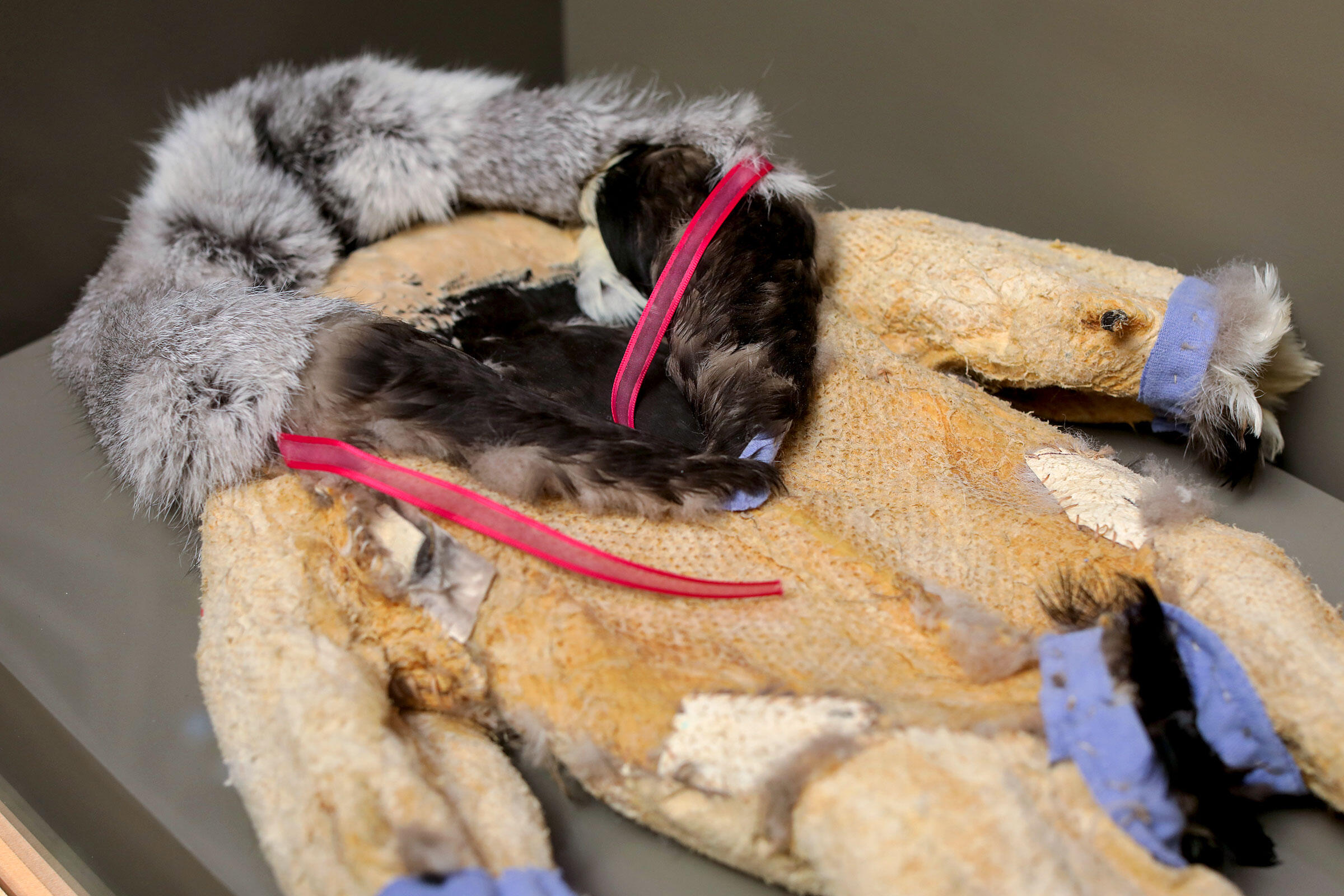 Dull’s eyesight has faded and she’s no longer able to sew, but she can still teach. Following her instructions, Fienup-Riordan and a group of Yup’ik women from Toksook Bay prepared the skins. First, they scraped off the fat, moving toward the head, which Dull told them was the best way to process the greasy skin. Next, they washed the hides with dish soap before hanging them to dry. Then Dull showed the women how to rub the skins in a circular motion to soften them. They then froze the hides for a few months before sewing. And finally, in the fall, they regrouped to sew the parka, with the feathers tucked inside and peeking out around the collar and hood.

Fienup-Riordan says the skins didn’t fit perfectly together, so the women had to patch the parka in a few places. But that was to be expected; the Yup’ik pass down their knowledge orally, so the women only had Dull’s memories from her youth to guide them. Dull says that their skills will improve as they sew another one.

The CECI team planned to fly back out to Toksook Bay this past spring to improve their parka-sewing skills and document the process, but the coronavirus pandemic has put those plans on hold until at least next spring.

Meanwhile, their first atasuaq now resides in Anchorage under the care of CECI. Rea Bavilla, the nonprofit’s executive director, chokes up as she describes her emotions when she first saw the parka. “The first thing I thought was: beautiful,” she says. “You know, our culture is just beautiful. And this is a beautiful product of the people we are.”

Although the parka is kept under glass for protection, it has already served as a cozy cocoon for one Yup’ik baby. Just as the team in Toksook Bay was finishing work on their atasuaq, a young woman in the village gave birth to a son. A few days later, the group went to visit mother and child. Working together, they gently placed the newborn boy into the warm, soft parka, just as Dull’s mother once did for her.