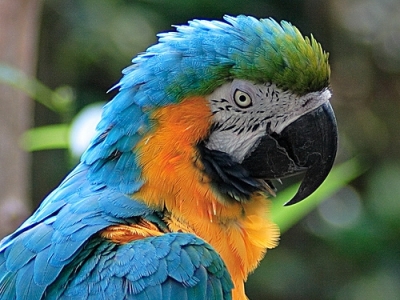 Shiver me timbers and blow me down! It be talk like a pirate day! In honor of this wonderfully wacky holiday, we’re featuring the rogues’ favorite companions. That’s right; we’re talking about parrots.

These gregarious birds range in color, size, and personalities. The brightly colored and loud sun conure is vastly different from the more demure cockatiel; and both are a far cry from the macaw that was featured in the Pirates of the Caribbean movies. Yet despite their differences, most species of parrots have something in common: They’re part of the pet trade.

Although there are many respectable breeders that also take part in rehabilitation and conservation (take New York City’s Fauna, for example), there are others that illegally capture birds for the pet trade. This can decimate wild populations that are already struggling to combat habitat loss.

For the past decade, the Solomon Islands have exported parrots, cockatoos, and other exotic birds in response to consumer demand in countries such as Singapore and Malaysia. However, it’s only recently come to light that these birds are not the captive-bred individuals that authorities thought they were. A facility on the islands has been exposed as exporting wild birds rather than captive-bred ones.

“Declaring exported birds as captive-bred has all the hallmarks of a scam to get around international trade regulations,” Chris Shepherd, the deputy director for Southeast Asia of Traffic, an international wildlife trade group, told BBC News.

Among the 35 different exported bird species from the facility was the critically endangered yellow-crested cockatoo.

In October, Terry Thompson cut open the cages of dozens of exotic animals and then committed suicide. Police then shot and killed 49 of the animals over the course of several hours.

Spotted geckos, colorful parrots, and fighting fish are just a few of the animals imported for the pet trade, a wildly unregulated industry that could be endangering public health and natural ecosystems.

In 2011, conservationists announced a victory when 29 scarlet macaws fledglings took flight over the forest canopies of Guatemala's Maya Biosphere Reserve.