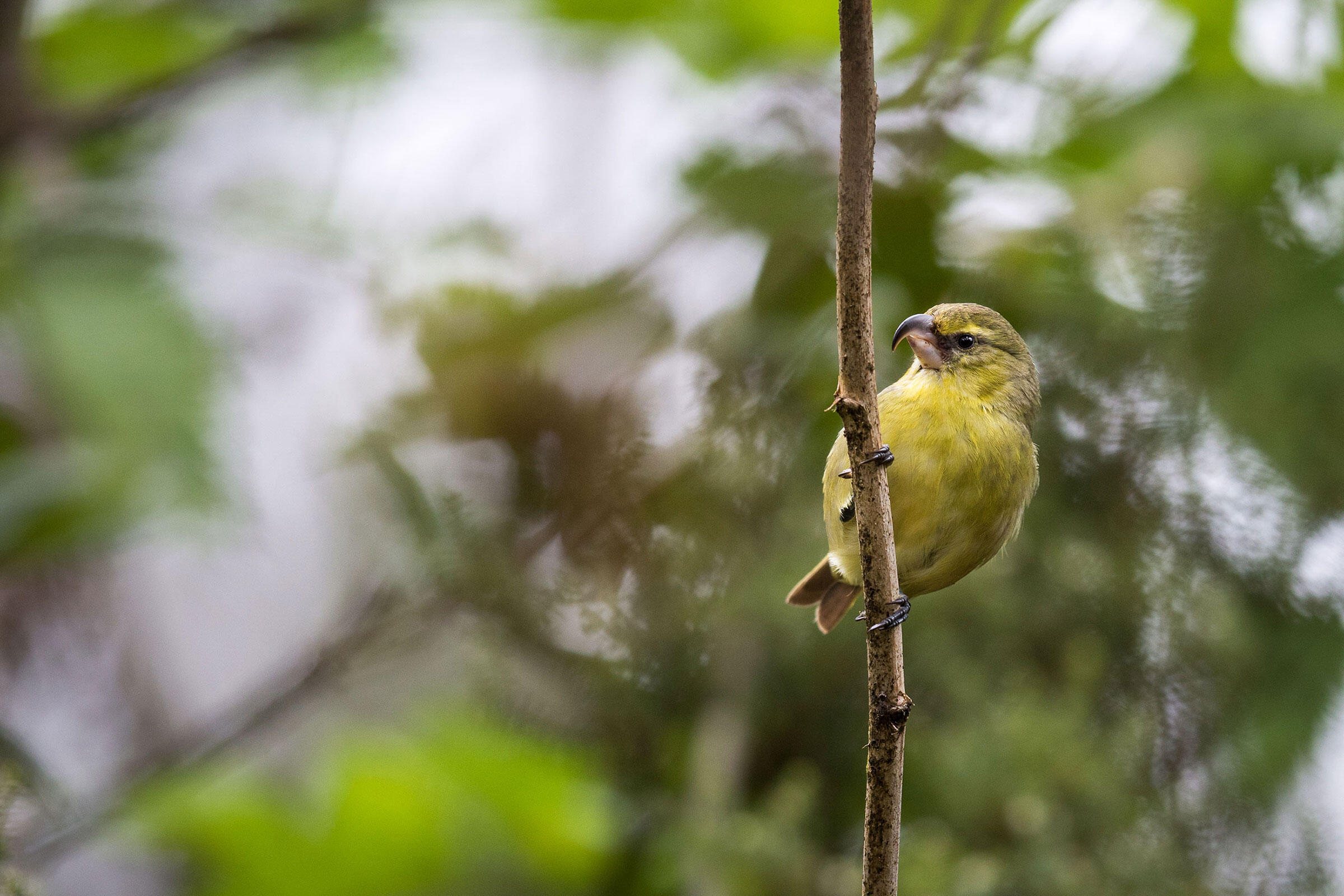 A proposal to buy time for Kiwikiu by sending some to captive facilities on the mainland draws criticism from a Native Hawaiian ornithologist.

Hawaiian honeycreepers are among evolution’s greatest examples of adaptive radiation, which occurs when one species diversifies into many to exploit a range of resources. But since the arrival of the first humans—and especially since Europeans and Americans showed up and introduced mosquitoes—two-thirds of the islands' honeycreepers have gone extinct. Only 17 species survive, including the Kiwikiu, a small olive-green passerine that wears a streak of yellow eyeliner and lives in the forests on the windward slopes of the Haleakalā volcano on Maui.

Now with only 150 Kiwikiu left and dire predictions that these birds will be wiped out within six years, scientists and officials are mounting another desperate effort to save the species. The problem is that not everyone agrees on the best plan, and the clock is ticking. “We’re trying to make use of all the expertise available to us in order to make the best possible decisions at this point,” says David Smith, administrator for the state’s Division of Forestry and Wildlife. “Our likelihood of success is extremely slim.”

Hawaiʻi is sometimes called the extinction capital of the world, and as such, heavy emotions pervade discussions around the Kiwikiu’s fate. The species—also known as the Maui Parrotbill—once lived in low-elevation forests but many birds were killed off by mosquito-borne diseases, like avian malaria and avian pox. Those birds that remain lived in cooler forests above 4,000 feet, where mosquitoes once couldn't survive. Recently, however, climate change has been expanding the insects’ range—and faster than anticipated. In 2019, after a decades-long effort by state agencies and private partners, 13 Kiwikiu were released on the leeward side of Haleakalā in hopes of establishing another population. But avian malaria killed almost all of them. A single mosquito bite is enough to transmit the deadly disease.

State officials have been working on a “mosquito birth control” program that would curtail insect populations by releasing lab-raised mosquitoes that can’t produce offspring. But field trials won’t start until 2022 or 2023 and it’s uncertain how quickly they will be effective, if at all. The Division of Forestry and Wildlife is now considering a multi-pronged approach to buy time, which it submitted in March in an informational briefing to the state's Board of Land and Natural Resources. It involves leaving some birds in their wild habitat, while possibly translocating others to Hawaiʻi Island, where higher elevation mountains safely harbor other honeycreepers. But there’s no evidence that Kiwikiu historically lived there, and so how they’ll fare there or interact with other birds is unknown.

According to the informational briefing, another option involves bringing 20 to 30 birds to facilities in Virginia, Pennsylvania, and Utah, where they might remain until their habitat can be made malaria-free. But when a species is so close to the edge, tensions are common over whether bringing individuals into captivity is the right course of action. Not doing so may risk complete extinction. However, removing individuals from a remaining small breeding population may hasten extinction in the wild, and it’s often unclear if captive animals will be able to return to their natural habitats, especially if they lose their natural behaviors or their genetic diversity becomes too limited.

In the case of the Kiwikiu, all of these concerns are in play. That's why a 25-year-old Native Hawaiian ornithologist, Bret Nainoa Mossman, has prompted a broader debate. After reading about the state’s briefing in the Maui News, Mossman started a petition against bringing birds into captivity and shared it on his popular Facebook and Instagram pages, which are dedicated to Hawaiʻi’s birds. He believes it is too big a risk to take the birds into captivity, especially to zoos that are on the mainland. He worries that being separated from the land and its native plants will negatively impact Kiwikiu—they could die in transit, may lose cultural knowledge, and may not be able to return to their natural habitat. “Place is so important because it’s where our culture is rooted, and the same thing for the birds—they develop their behaviors and their songs based on where they live,” he says.

Mossman feels a kinship with Hawaiian birds. He grew up in Utah, but he went to a summer school program in Hawaiʻi run by Kamehameha Schools, where he learned about Hawaiian culture. In college, he returned to work with captive Palila, another endangered honeycreeper, and then moved to Hawaiʻi Island for a conservation biology master’s degree. Today he lives with cousins on Hawaiian Homelands, which are reserved for people of Hawaiian descent.

Patrick Hart, a behavioral ecologist at the University of Hawaiʻi at Hilo who served as Mossman’s thesis adviser, agreed with Mossman’s concerns. He noted the importance of “cultural transfer” between Kiwikiu, similarly to how humans pass along knowledge. This is how the birds learn to find food, avoid predators, sing mating songs, feed their young, and so much more. “It’s really important to keep that cultural flow of knowledge going,” said Hart. Whether in the wild or in a facility, he says, “I’d rather see them stay here.”

In the wild, Kiwikiu forage across large expanses. While hard to spot in the subcanopy, they sometimes give away their location with crunching sounds as they use their parrot-like bills to dig insects out of the bark of native plants, like the ʻōhiʻa lehua. They have long lifespans, living up to 18 years, and the chicks spend a year and a half with their parents before venturing out on their own. In prior attempts to captive-breed the Kiwikiu, the birds have rarely mated and never raised their own offspring, forcing humans to hand-rear the few chicks born. Right now, the state is looking at captivity mainly as a measure to keep some surviving birds safe from mosquitoes. The goal isn’t necessarily to breed them or create a zoo population, says Smith.

Many captive-reared birds from Hawaiian forests, such as the ʻAlalā, ʻAlawī, Ākepa, and Palila, have struggled after their release, Mossman notes. While some have lived for a few years in the wild, none have resulted in populations in the wild today. (Representatives with the two bird conservation centers in Hawaiʻi where previous captive-bred programs took place, Maui Bird Conservation Center and Keauhou Bird Conservation Center, declined to be interviewed.)

Asked about some of Mossman's objections, Smith said: “These are all valid concerns—there's no question about it, and that's why it is a very difficult decision.” Smith said that officials are currently looking at whether a facility in Hawaiʻi would be able to keep one-third of the birds, rather than bringing them all to the mainland. A final proposal will be submitted within months to the Board of Land and Natural Resources for approval, he says.

Since starting the petition, Mossman says he has heard from some other Native Hawaiians who offered support. According to a 2010 census, nearly half of the 527,000 people who identify as Native Hawaiian live on the continent, in part, he notes, because of the high cost of living on the islands. “There is this deep connection to Hawaiʻi for Hawaiians. The āina is what gives us life,” said Mossman, referring to the land. “Being separated from that, we can survive, but we don't do as well as we could, and I think that's why [this issue] connects so much with people, because they felt that pain.”