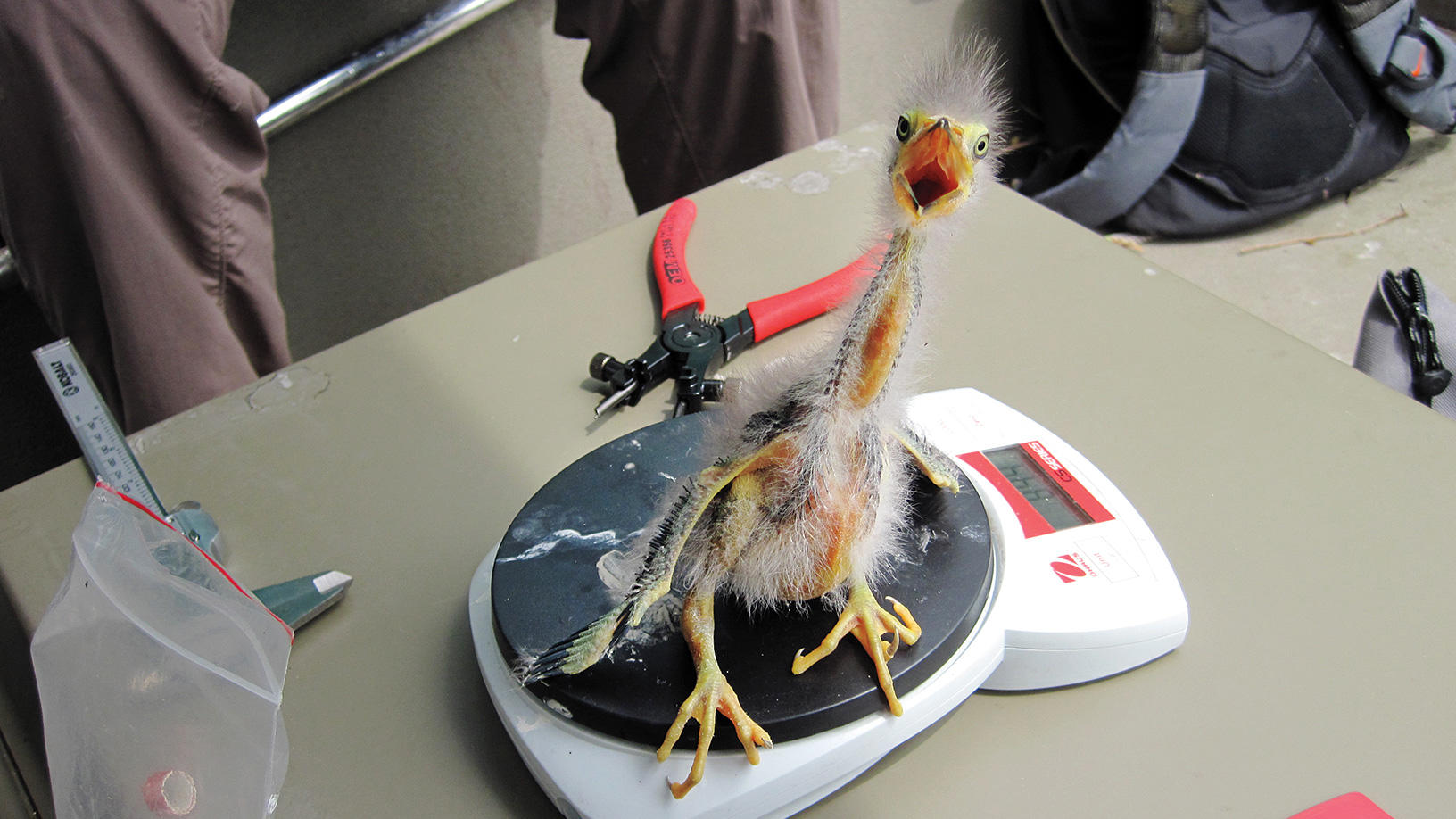 Ornithologists Own up to Their #fieldworkfails

In “Ornitho-logic,” we highlight wonderful experts who are rescuing birds and teaching the world more about them. But over the weekend, scientists, spurred on by nostalgia and not the least bit of shame, took over Twitter to share their disastrous research experiences using #fieldworkfail. Though they've since moved on to tweeting #fieldworksmells, we’re keeping the blooper reel running: We grilled a handful of ornithologists to see what disgraceful moments they’d experienced.

"I already had three seasons of Green Heron nest monitoring at the Paul J. Rainey Sanctuary under my belt. Yet the first to ever fall off of the boat during the surveys was yours truly. At least my advisor and our intern were there to bear witness, laugh, and quickly yank me out of the alligator-infested waters."

"I spent 15 months of my life in the Amazon jungle. My worst injury there: slipping in the shower. Face met tile; hello concussion."

"In the late 1990s I was supposed to spend about a week on Anacapa Island in the U.S. Channel Islands off of Southern California, helping with the early stages of a project to free the island of rats. Getting ready for this trip involved a lot of travel, preparation, and logistics, plus a day each way of travel.  My field work was scheduled in the days before Christmas. The Channel Islands Park boat dropped me off with my bags and equipment on the island; I headed to the park building, only to find that everyone was leaving the island! After only two hours on the island, I joined them on a helicopter out."

"My wife and I were setting up mist nets on tidal flats at the edge of the forest in Alaska's Copper River Delta. We intended to catch and band Western Sandpipers, but suddenly a brown bear sow and her three large cubs stepped out of the forest. They trashed the mist net and played with our gear. We quickly backed away, and could only watch from a safe distance."

Stanley Senner, director of bird conservation for the Pacific Flyway at Audubon

"Little puts me in a better mood than an early morning of mist netting birds. But I can’t say the same about a party of kids biking through the trails of a neighborhood where I was trapping several years ago. As I walked between nets, looking for captured birds, I heard a commotion up ahead.  Sprinting to the next net I found it utterly trashed; beside it sat a young boy, a bicycle, and a radio.  He was shaken and dirty, but unharmed. The boy spoke feverishly to his parent through the walkie-talkie, explaining that he wasn’t sure what had just happened. He stammered about a really thick spider web, which set me off laughing. I could hear the parent tearing into him from the other end of the line. He headed home—probably to a more severe punishment—as I ripped what remained of my net from his bike. Nets aren’t cheap, but the memory of this one was worth its weight in gold."

"On one of our annual colonial waterbird surveys we pulled up to the first island of the day and I raised my binoculars to count breeding pairs. A Forster’s Tern was seriously insulted by our presence apparently, and came over immediately, dove down . . . and pooped, right on the top of my head. It had been 30 seconds into a 5-hour field day. I didn’t even have a hat.

Another time I took two interns to Rollover Pass in Galveston County by boat to do rookery island management work. A huge double barge passed by and threw our boat up on dry land with its wake. We were totally stuck. The interns were sure that we were doomed and that we would die on the island eating fiddler crabs. I sprang to action and found a flat board to teach them about “physics” and how wedges and fulcrums work. We saved the day with minimal effort, and I bought the interns snow cones on the way home. That physics board still rides proudly on the Audubon boat, for the day it may save us again."

"It was a cold, foggy morning, and I was setting noose traps with locals to catch Bar-headed Geese on a riverbank in Nepal. I became a bit perturbed when they stopped helping me make the fire. Although they didn’t speak much English, I asked why they weren’t working. One man turned to me with a quizzical look and gave me a one-word answer that immediately clarified the situation. 'Tiger!' "

"One time my team's ATV was stuck in a ditch full of water. We spent at least five hours trying to push it up the embankment, but the wheels wouldn't budge. Turns out it was in drive the whole time; once we put it in neutral it rolled right up.

I also once spent three hours tracking a rail that was hanging out mysteriously close to my truck. In the end I realized that the GPS transmitter wasn't even attached to a bird—it was still in the car."

"While in Mexico, I was heaving around a 100-pound ladder so that I could study the color of jay eggs. Of course, I stepped on a cactus and had to say goodbye to half of my front tooth. Thanks to the remote location, it was a while before I could get it fixed.

Years later I was driving to a field site and looked over to see my car wheel happily rolling behind me as the vehicle skidded by on its axel. Amazingly, I was en route to the same place where the ladder incident went down. But this time I got a tow and repair the same day and was back on the road the next day."

John McCormack, director and curator of the Moore Laboratory of Zoology at Occidental College, @LAevolving

"I once gathered a group of children and their parents together in a circle to watch the release of a rehabilitated Red-tailed Hawk. I knew it would be a strong flier; we were all expecting the hawk to soar into the sky for a dramatic departure. But the hawk had a different idea. Instead, it jumped from my hand to the ground and ran into the crowd like a frightened chicken, scattering the group as it ran. The hawk was retrieved and given a more private release later."

"While starting a month-long shorebird survey, my field partner and I were driving an SUV down the beach over 20 miles away from the nearest road access. As we passed over the last rivulet crossing the beach, our vehicle slammed down on the the sand, with all four wheels spinning away freely. Once the tide came in later that evening, all that was visible of the truck was it's roof—what a way to start a survey! It was "fun" explaining to our bosses that we needed to buy a new truck after one day."

"Four words: ticks in my underwear. I was in the Missouri Ozarks doing bird surveys during college. Doxycycline would have made a difference."

Calling all bird banders, ornithologists, and avian techs: If you have any fieldwork mishaps, feel free to fess up to them in the comments below. Solidarity in (bad) science!