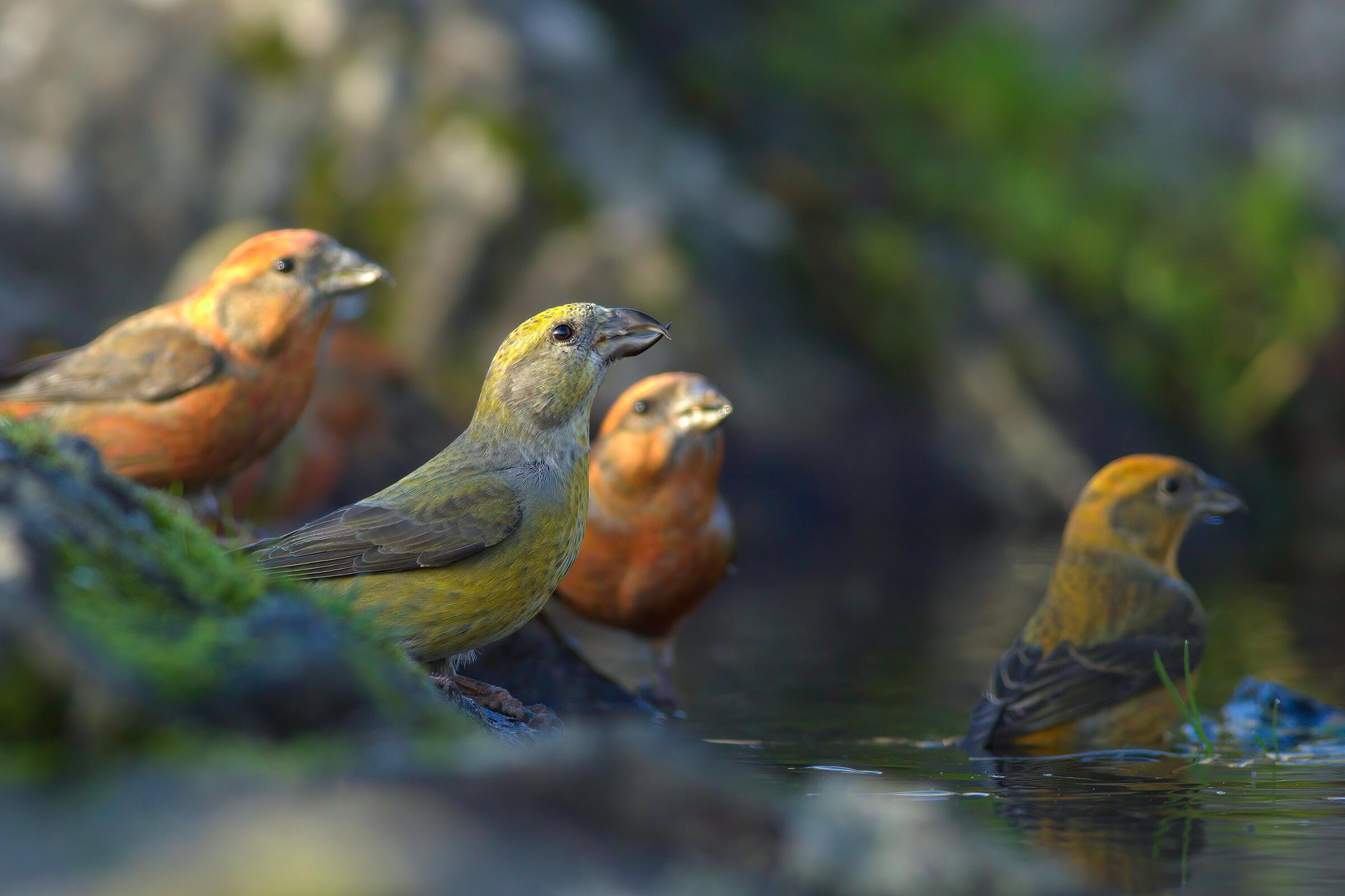 Our Favorite Female Bird Shots From the 2021 Audubon Photography Awards

This stunning collection celebrates the beauty and ingenuity of 15 birds that do not often get the spotlight.

Female birds are some of the more underappreciated and challenging birds to see—many eschew the showy plumage and attention-grabbling behaviors that bring others into the limelight. But this neglect by birders, scientists, and photographers isn’t just a problem of philosophy or equality. Recent research has shown that lack of focus on the specific needs of female birds has profound consequences for species conservation—and that makes it a concern for Audubon.

So, this year, we asked photographers to seek out female birds and send in what they found. We were not disappointed. From the subtle beauty of an Anhinga to the raucous flock of Red Crossbills around a stream to the majesty of a Peregrine Falcon, the birds in this collection show us that there is plenty to discover if you commit to focusing on the females.

If you’re inspired to pick up a camera and pursue avian subjects of your own, our photography section has everything you need to get started, including tips and how-to's and Audubon's ethical guidelines for wildlife photography. Then get out there and start recording your favorite winged subjects.

Location: East Sooke Regional Park, Sooke, British Columbia, Canada
Behind the Shot: While standing at an overlook point enjoying some passing humpback whales, we noticed a flock of Red Crossbills fly into a nearby tree. They began circling overhead and aggressively dive bombing us, which was obviously quite abnormal. When one landed on my friend’s hat we realized that they were trying to get us to move away from this puddle so they could get something to drink. In this photo, the yellow female in the foreground steals the spotlight. 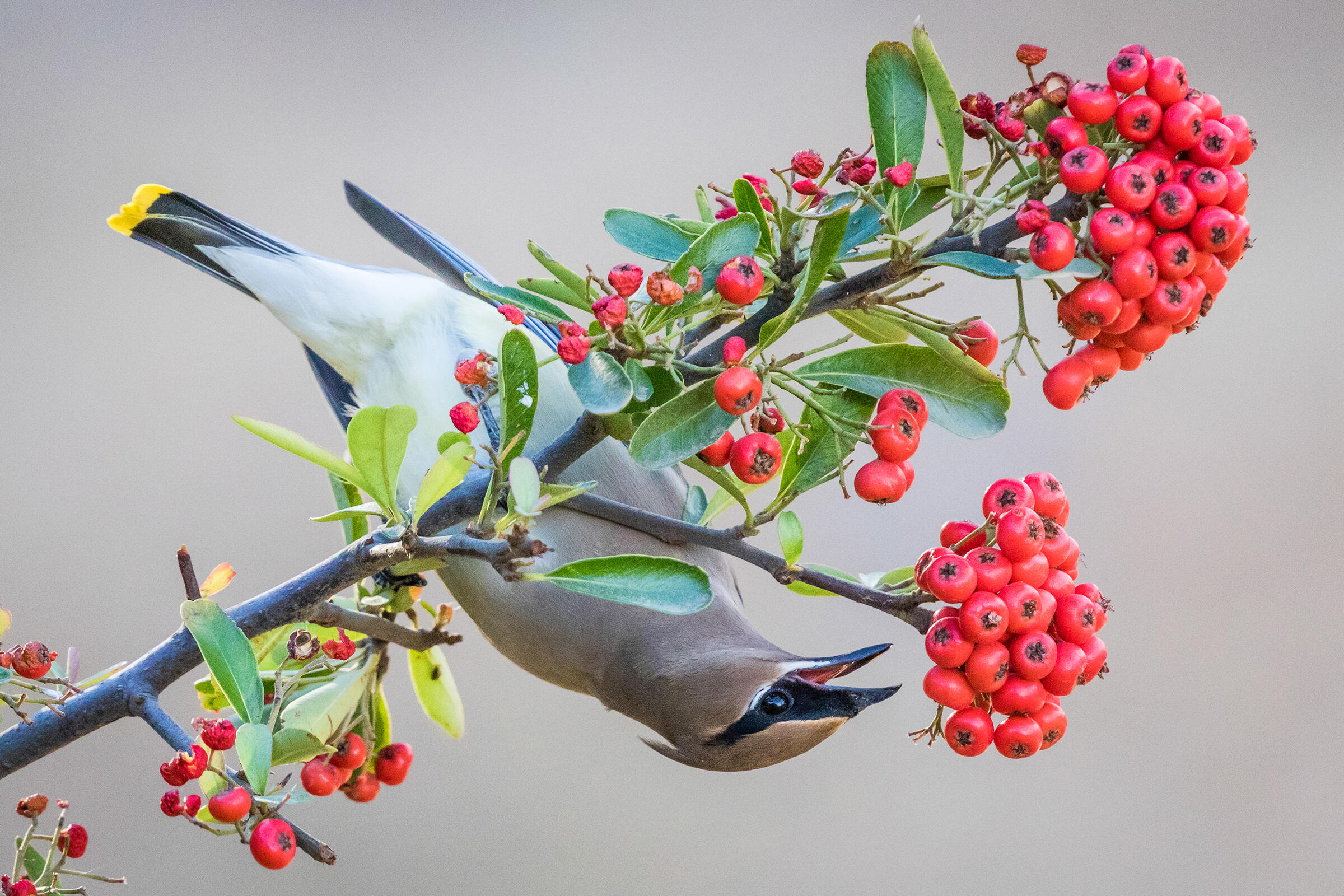 Location: Madera County, California
Behind the Shot: As the year came to a close, a large pyracantha bush in my yard was filled with thousands of berries. It attracted a lot of birds—14 species in all. One morning as I was sitting outside watching the festivities, four Cedar Waxwings showed up. They are rare in oak woodlands around my home. If I had not been outside at that particular moment I never would have known they had been there. 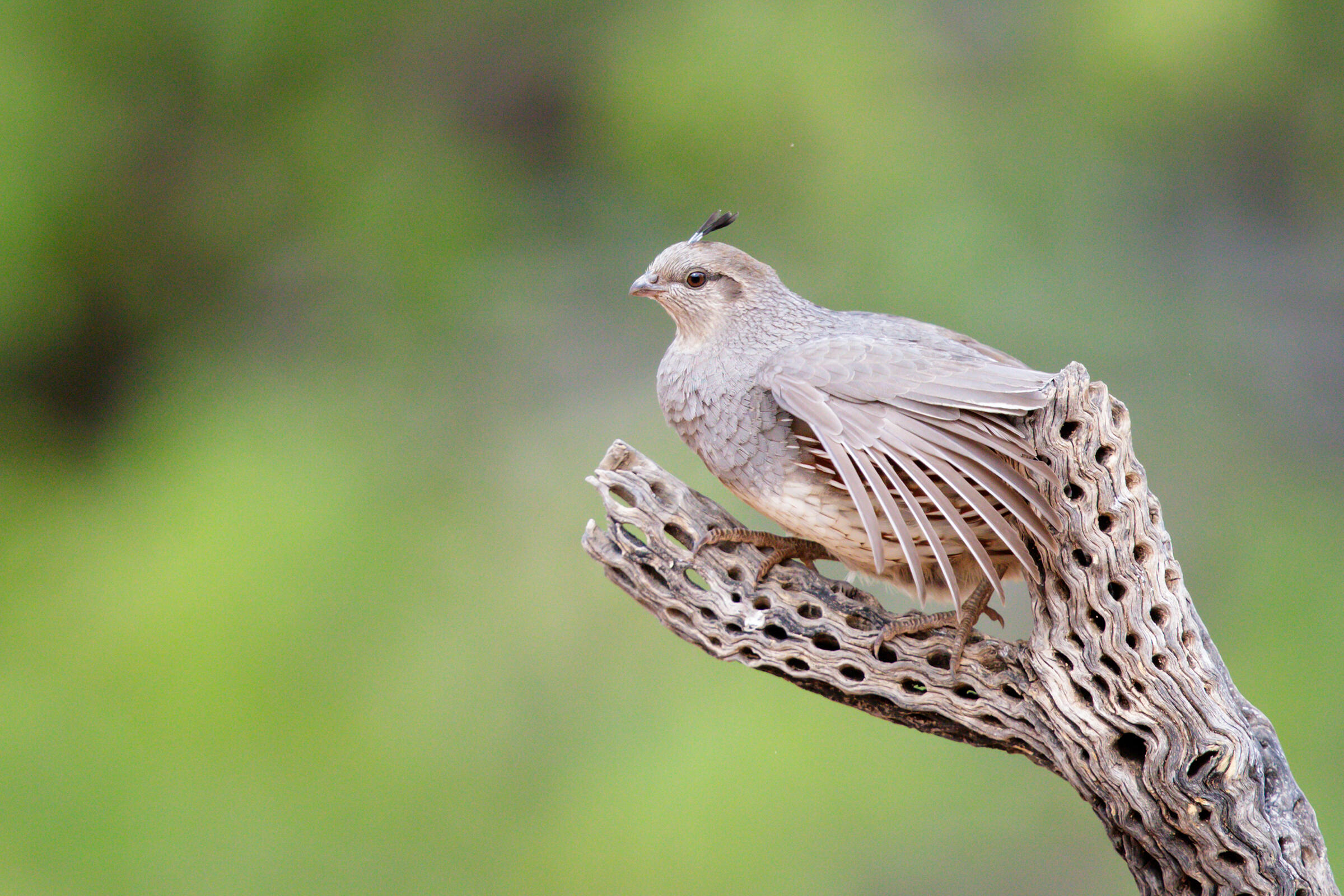 Location: Green Valley, Arizona
Behind the Shot: There were loads of Gambel’s Quails scooting about, and I was particularly excited to photograph the males with their beautiful patterns and whimsical feather cap. I was busily photographing a male who was proudly strutting by when I noticed this beautiful female perched atop a cholla cactus skeleton. She appeared to be presenting for the male and splayed her feathers out across the top of the cactus. The combination of textures, patterns, and subtle tones against the vibrant green background really showed off her subtle beauty.

Location: San Jacinto Wildlife Area, Lakeview, California
Behind the Shot: Every winter a few American Kestrels migrate to San Jacinto Wildlife Area. They are usually young birds with fresh plumages. On the day I took this photo, I was hoping to photograph the more colorful young males, but they were nowhere to be found. This young female was a little bit more cooperative, and her perfect plumage and colors made her very attractive. Using my SUV as a blind, I picked one simple and photogenic perch and positioned myself to get the shot. After the kestrel landed on that perch, she scanned her surroundings and then she began to groom herself. I was filled with anticipation, as I know from observing the kestrels’ behaviors that she would soon do the “dipping”, the “bowing”, and the “stretching” of her beautiful wings. I just hoped that I would have a good angle, good lighting, and good background to properly capture these special moments.

Location: Charleston, South Carolina
Behind the Shot: I took this photo during the pandemic lockdown at a small pond near my house. It shows off the female Anhinga's distinctive characteristic: a brown neck, as opposed to the entirely black one of the male.

Location: Deland, Florida
Behind the Shot: I spotted the bird foraging in a wooded area near a neighborhood lake. It became apparent to me that she may have been accustomed to people since she didn't show fear or try to move away from me. Instead, she came within five feet of where I stood, providing a close-up look at her beautiful feathers. 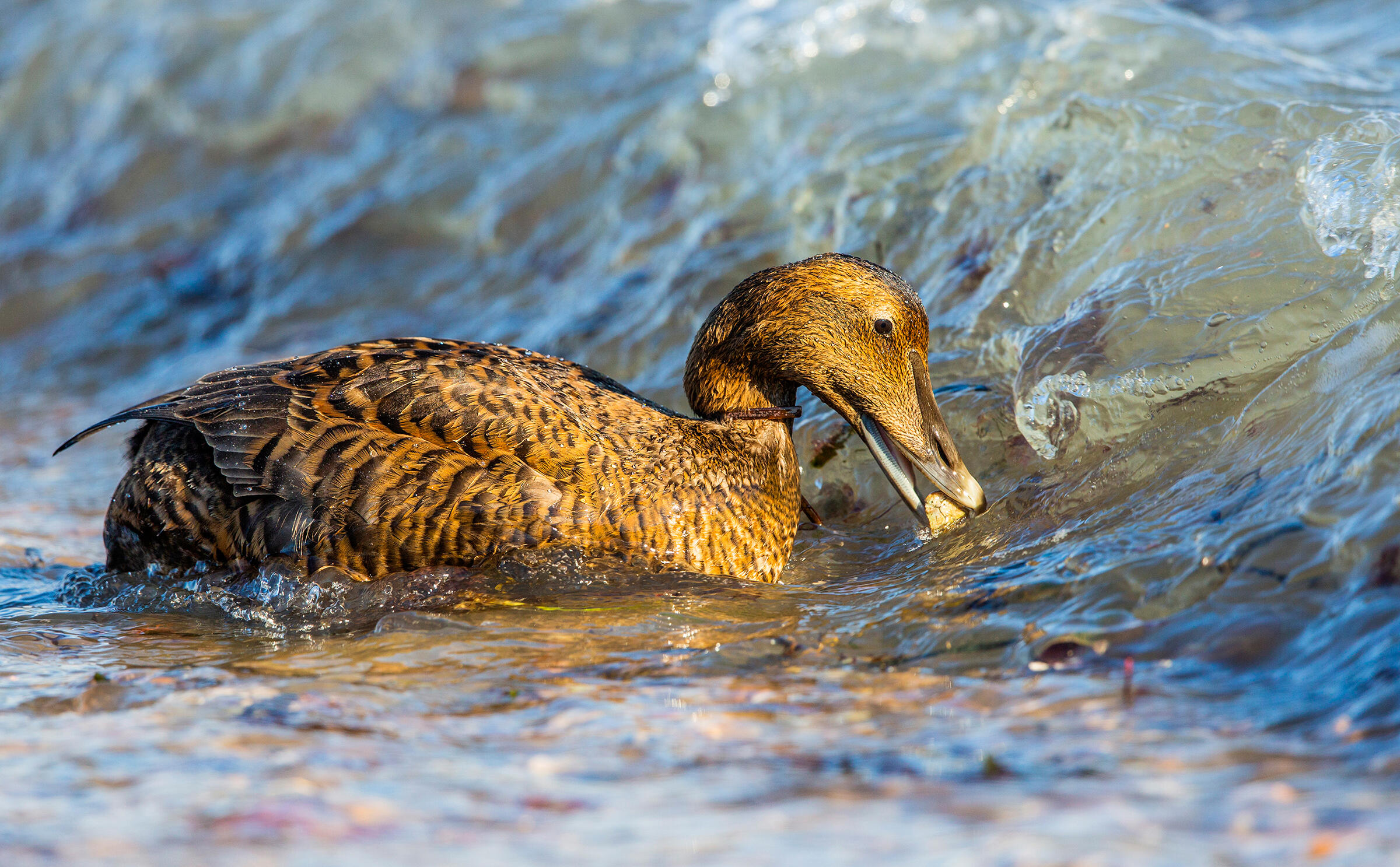 Location: Westport, Massachusetts
Behind the Shot: I took a trip down to Gooseberry Island, which can sometimes be very hit or miss in terms of wildlife. I walked the entire length of the island and found next to nothing to photograph, so I returned via the beach to the parking lot. Almost to my car, I spotted a number of female Common Eiders hanging out in the waves very close to the shore. Perched between some rocks on the beach, and almost at ground level, I managed to get this shot of one of the ducks finding shellfish in the waves. 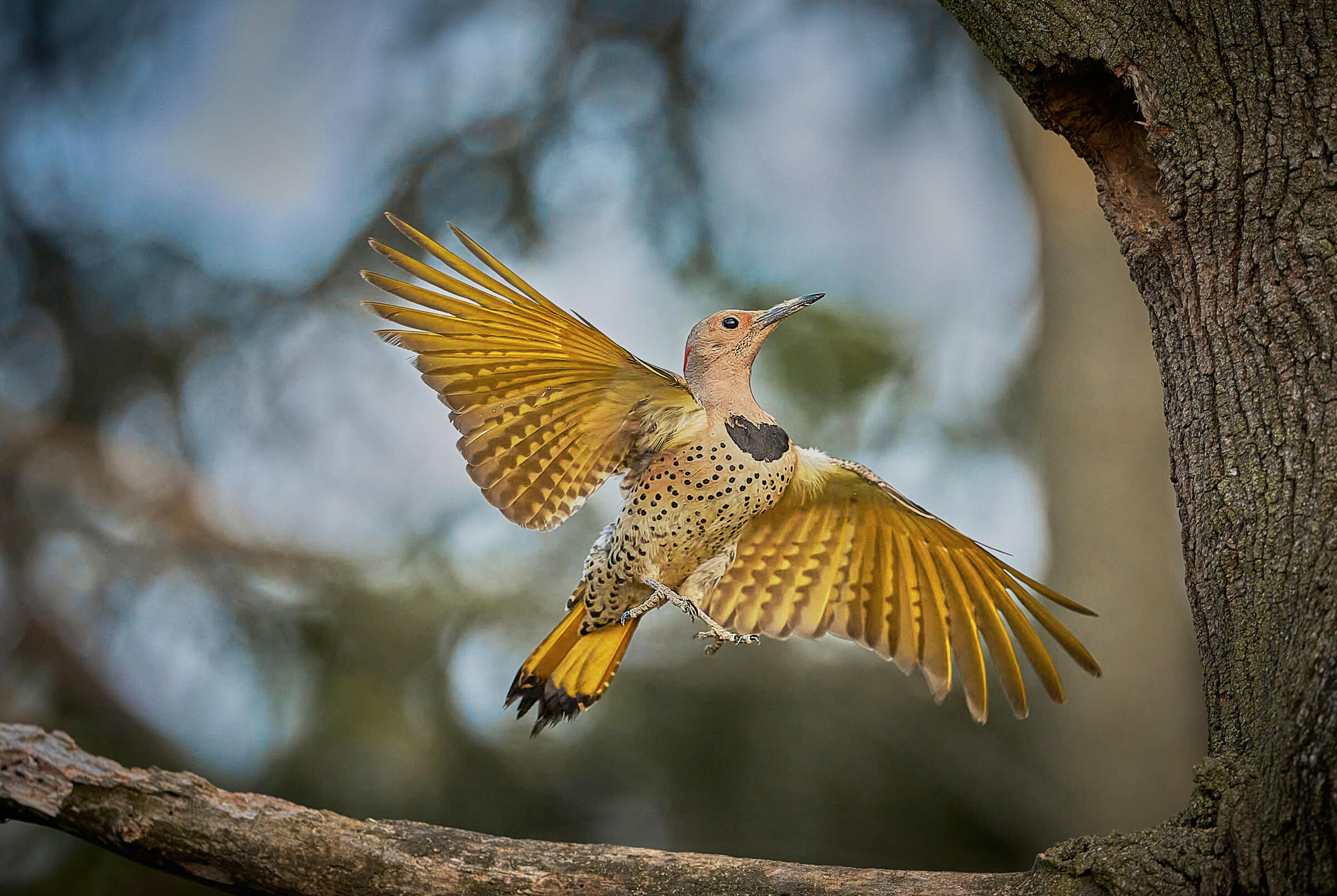 Location: Lancaster, Pennsylvania
Behind the Shot: I observed and filmed this pair of Northern Flickers as they created a nest in a maple tree. They went on to have chicks and were both raising their young until the male was killed by a hawk, leaving the female to take on all parental duties. We did not know if she would be able to do it alone, but after weeks and weeks of non-stop parenting she had three chicks fledge the nest. This picture of her sums up the love and commitment she displayed for her chicks in raising them all by herself. 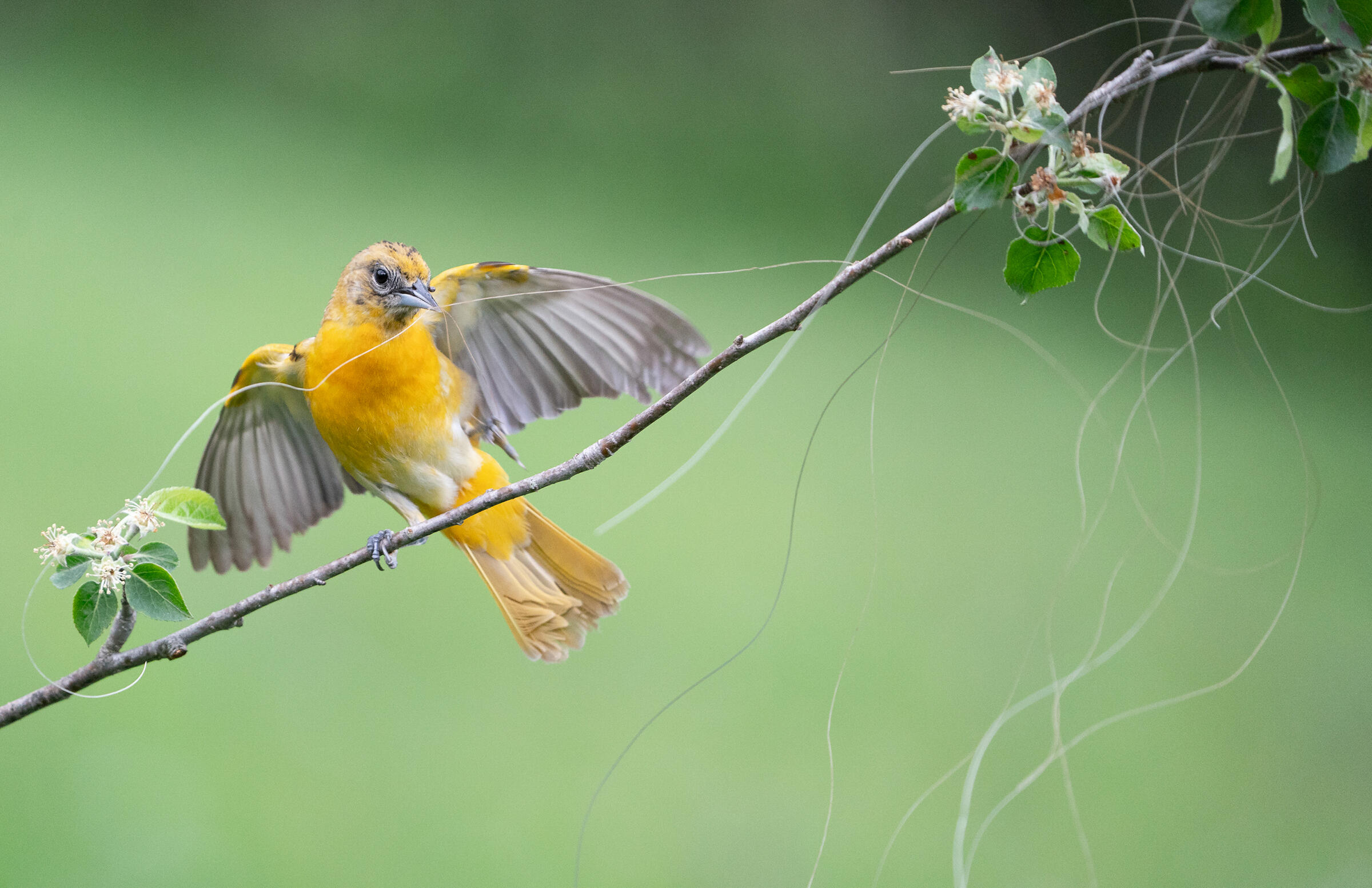 Location: Warren County, Pennsylvania
Behind the Shot: My younger sister lives on a property adjacent to ours in rural Pennsylvania. She has numerous horses, and there is always an abundant supply of horse hair for the Baltimore Orioles to use for their nest building. In 2020 we were lucky enough to have a pair of orioles build their pendulous, oval nest in our front yard. 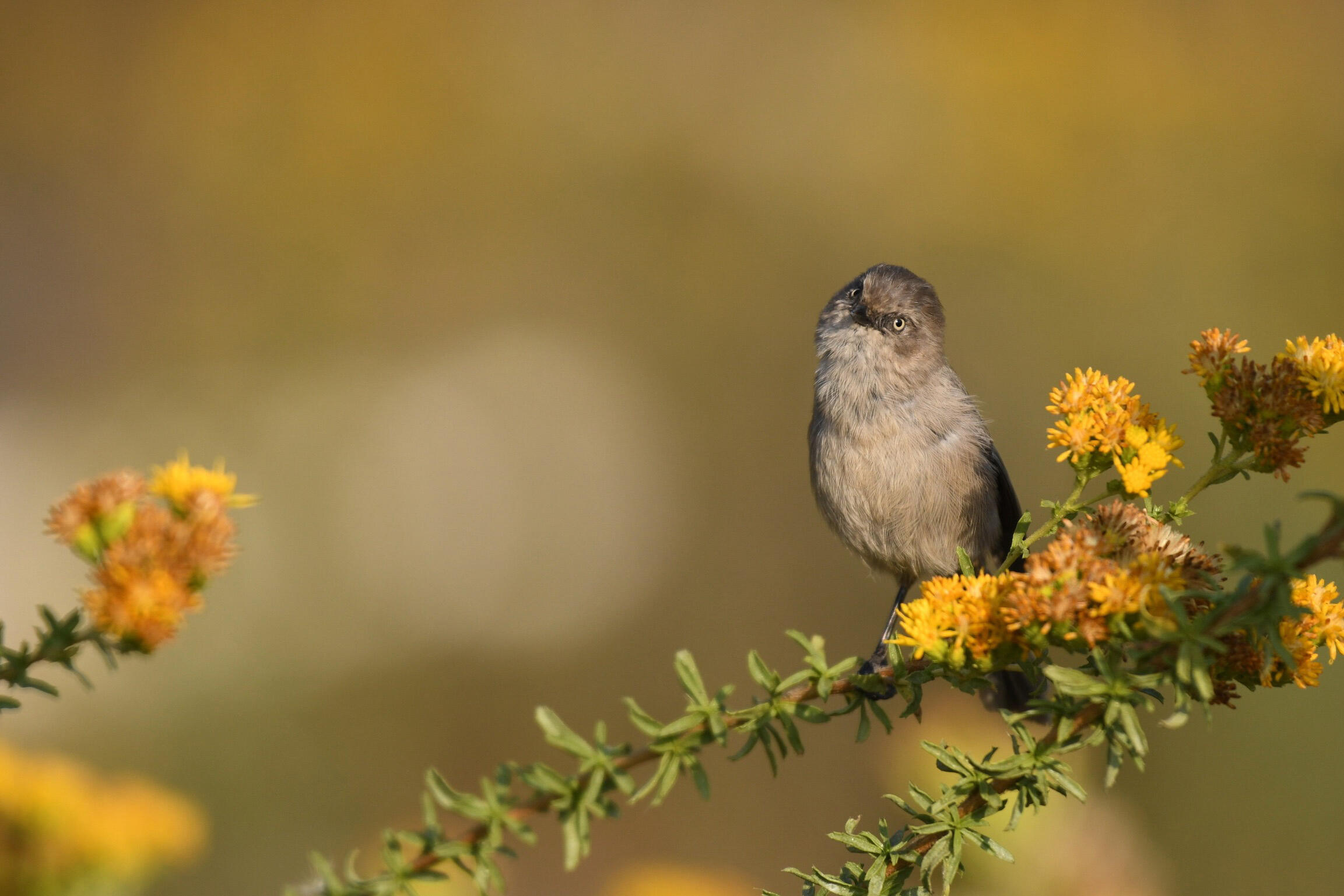 Location: Malibu Lagoon, Los Angeles County, California
Behind the Shot: While looking for a rare White Wagtail that had recently been reported, I found a large Bushtit flock. After searching through them, I located one that was staying still for a bit. As she raised her head, I took this photo. 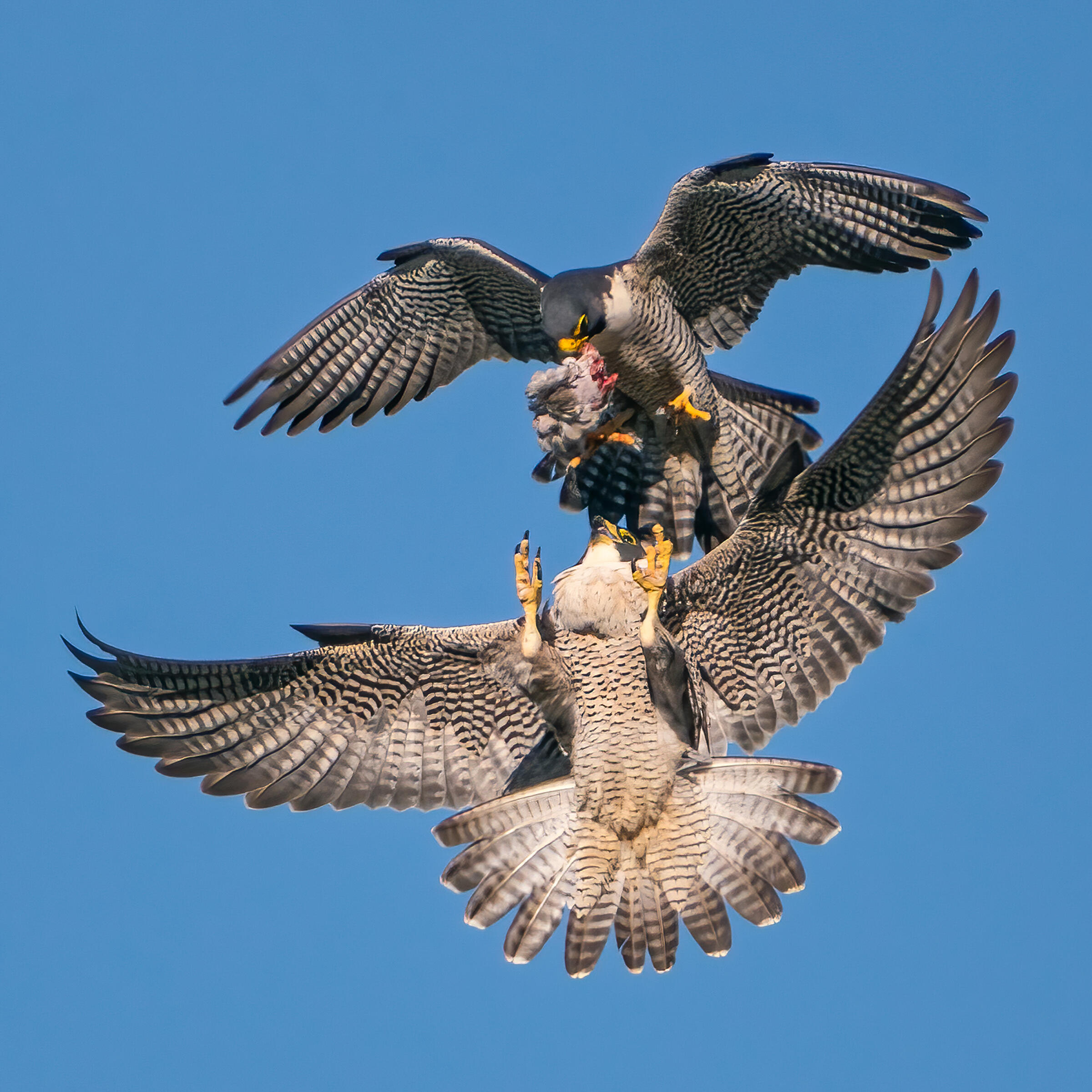 Location: Devil’s Slide, Half Moon Bay, California
Behind the Shot: Every year Peregrine Falcons return to this monolithic rock by the Pacific Ocean to roost. In late February, they start mating. During this time the male is often seen hunting and bringing its prey—mostly pigeons—back to feed the female. Once close to the nest, the female flies out and grab the half-eaten prey from the male and fly off to a quiet place on the cliff to consume the catch. This scene would repeat at least twice a day, once in early morning, and once before dusk. I shot this this in early morning when the light was more propitious. 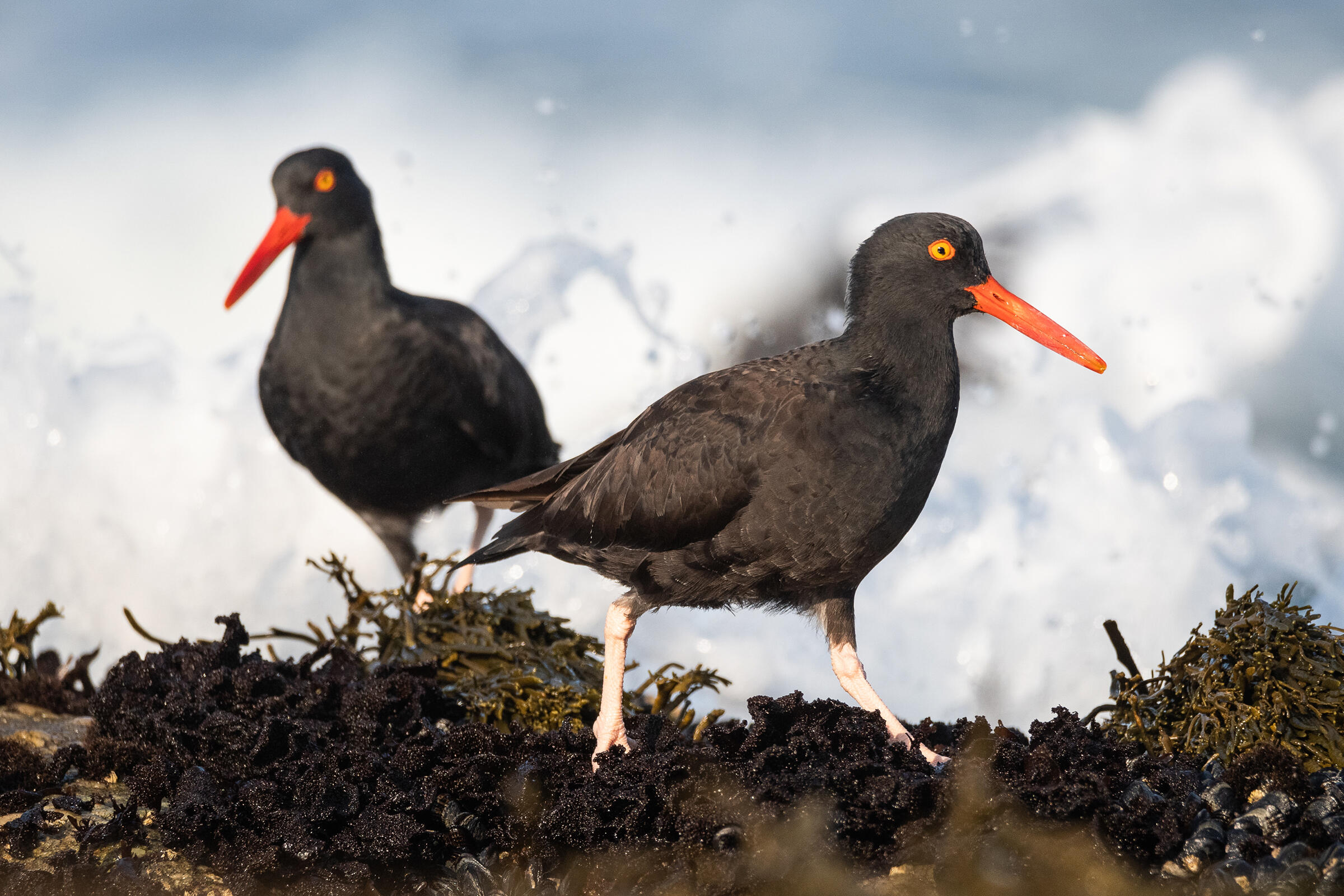 Location: Carmel-by-the-Sea, California
Behind the Shot: During the spring and summer of 2020 when the pandemic limited travel and many parks closed down or restricted access, I was fortunate enough to still have access to the Pacific Grove rocky shoreline. I made it a point to get out and enjoy this area several times a week and photograph Black Oystercatchers. On this particular day, I came across the female while the fog was lifting and it was threatening to rain. As she was hunting her breakfast, I just loved the way her orange bill and yellow eye popped against the dark blacks and browns of the mussel beds and her dark plumage. 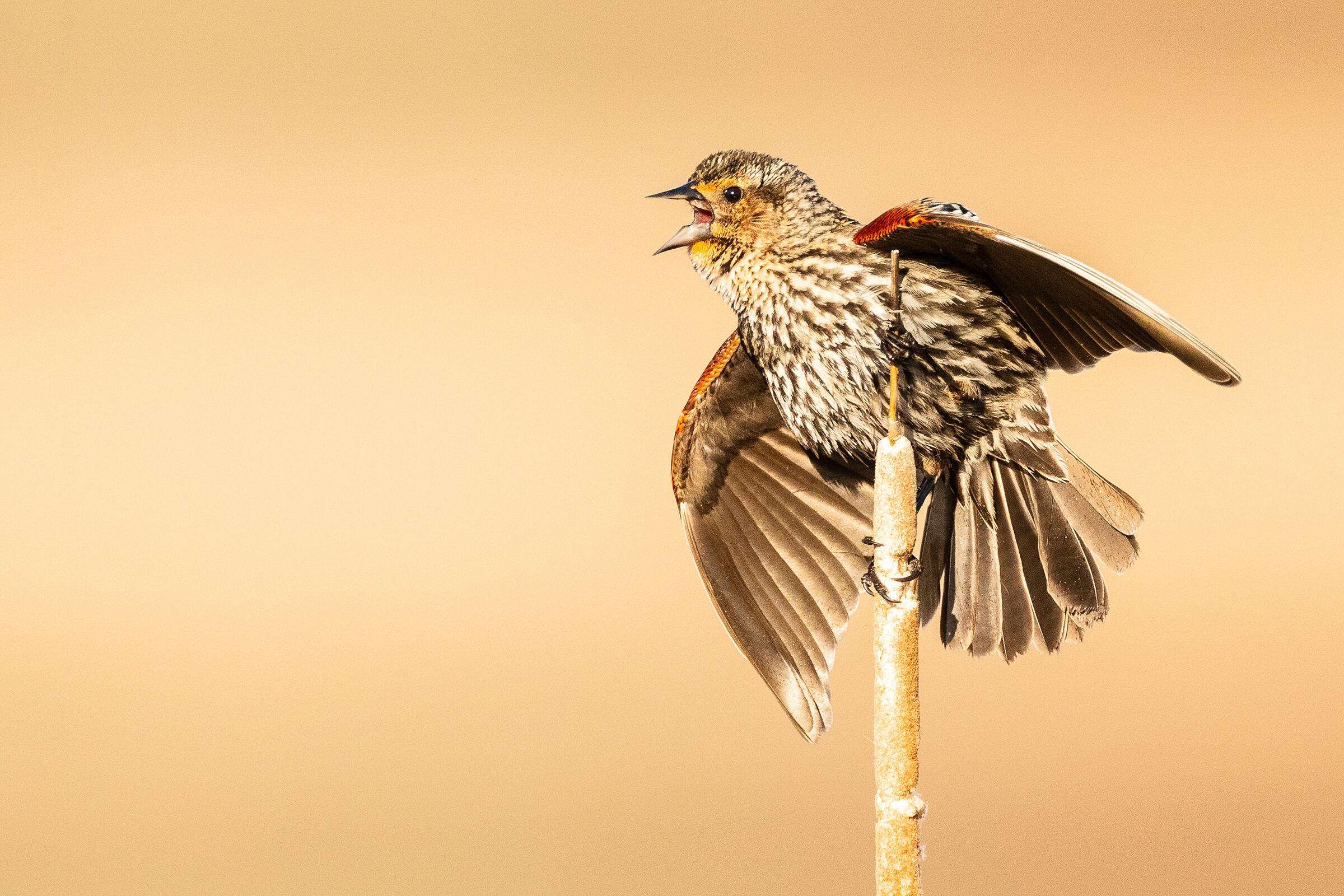 Location: Concord, Massachusetts
Behind the Shot: Photographing Red-winged Blackbirds is one of my favorite things to do in spring. I always seem to learn something new about their behavior. Having spent so much time with them over the years, I realize that they are like snowflakes: No two are exactly alike! Last spring, I discovered this particularly striking female with a bold orange face and robust reddish-orange wing epaulets. Over my many visits to the area, I learned where her territory was and often set myself up to try and get a photo that did her beauty justice. She mostly remained elusive until one May morning, when she suddenly perched herself on a cattail and began calling and displaying. I had never seen this behavior from a female Red-winged Blackbird before, nevermind from one so striking. Luckily, I had my camera settings for action and was able to capture this amazingly unique moment. I am hopeful that my photo not only captures this female’s beauty, but also educates folks that females are also quite capable of this type of display behavior. 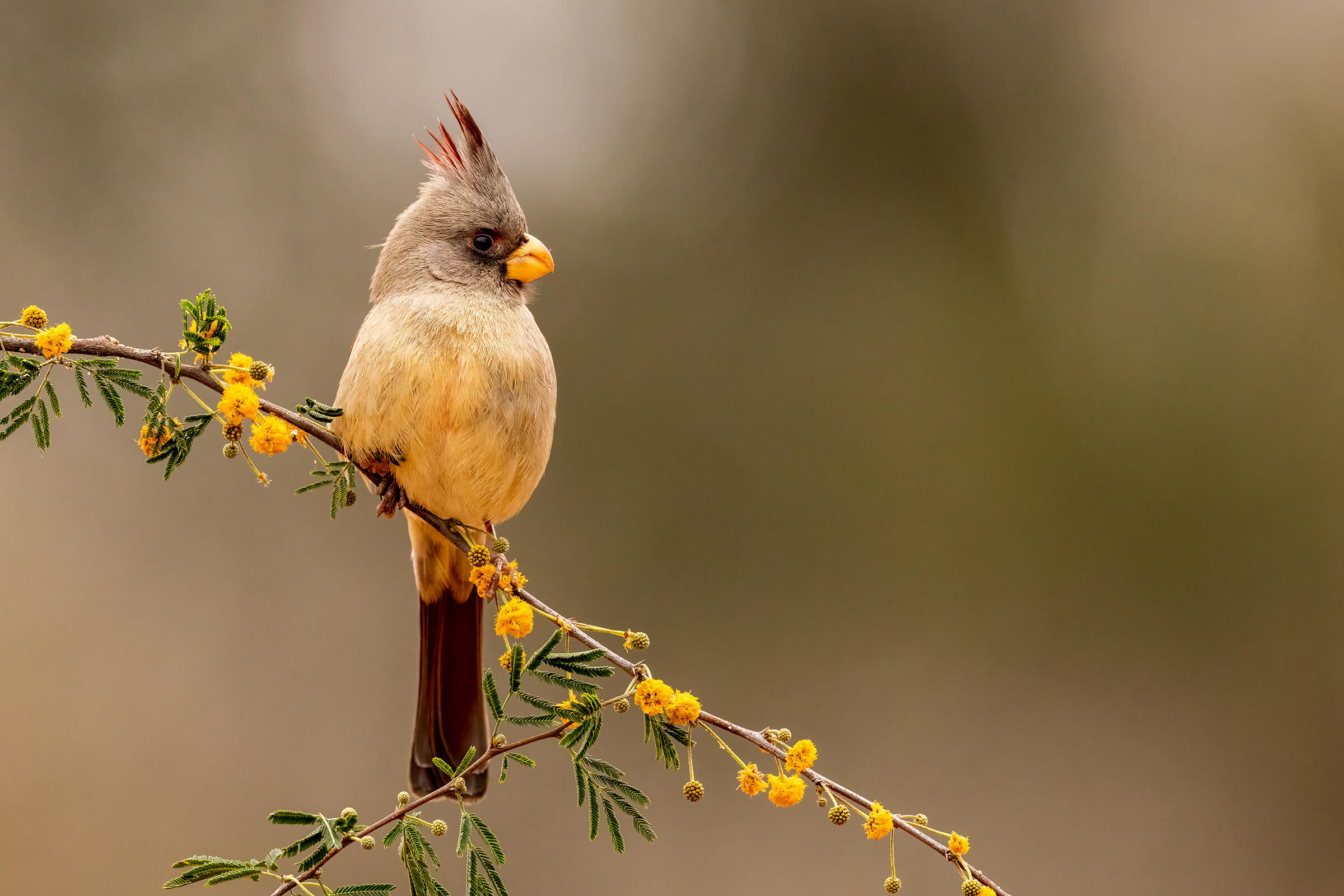 Location: Edinburgh, Texas
Behind the Shot: In the animal kingdom, the male of a given species usually has the brighter colored adornment. But I am always thrilled when a lady of distinction makes her presence known, and when she does, I pay attention. This female Pyrrhuloxia seemed shy, trying to slip in unnoticed if possible. But she was regal and stately in her own right, and she immediately got my attention, distracting me from my mission that day of attempting to photograph birds in flight. During our brief time together she provided a nice pose, and I was all too happy to capture the moment. 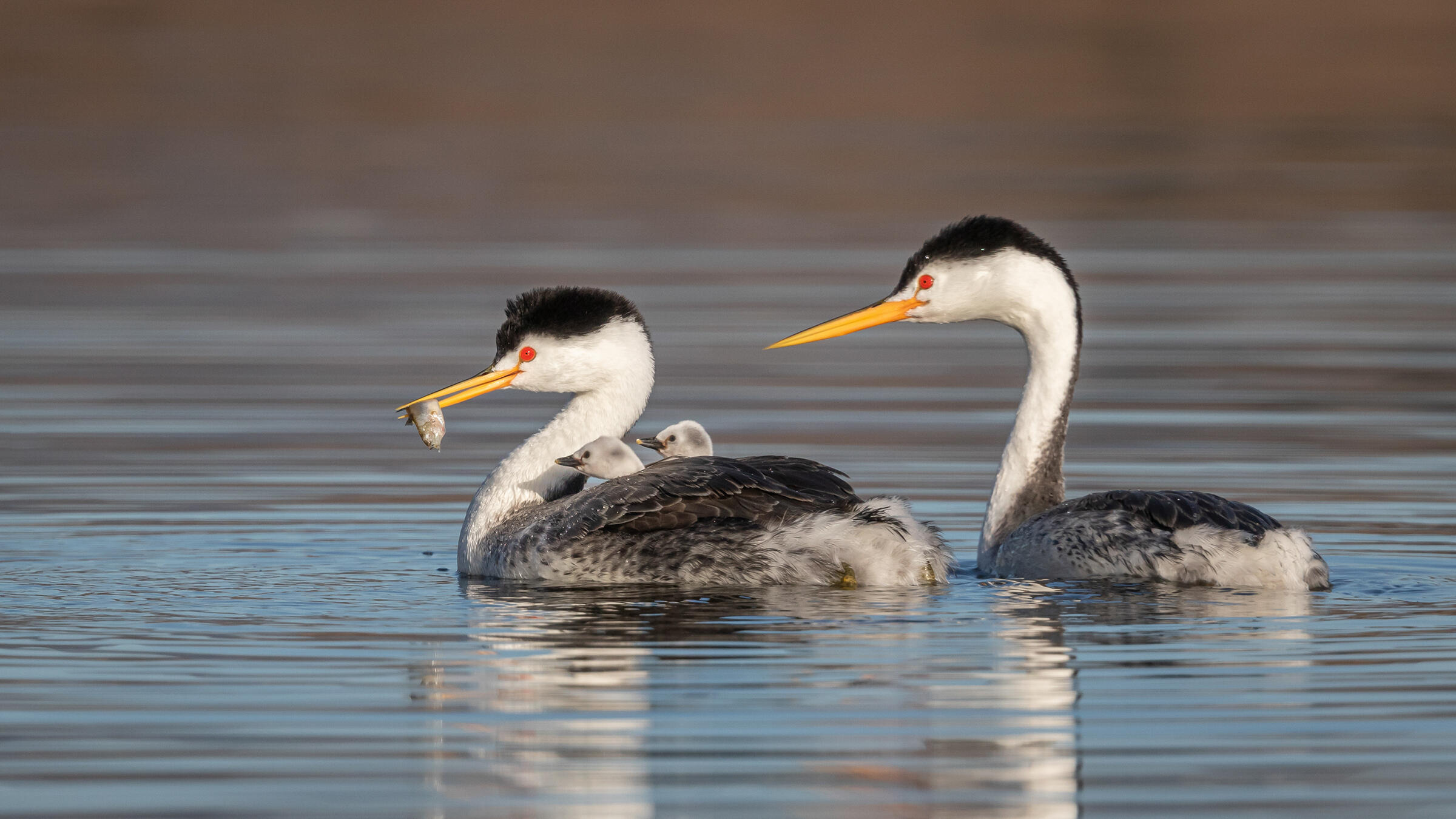 Location: Escondido, California
Behind the Shot: Clark's Grebe parents take turns carrying, feeding, and protecting chicks. In this shot the female is multi-tasking: Giving the chicks a ride and holding a fish in her bill. The moment that chicks hatch, they climb onto the back of the parents and they stay there as long as they can. I have spent more than five years studying these birds and working on a conservation project here at my local lake to protect their nesting environment.