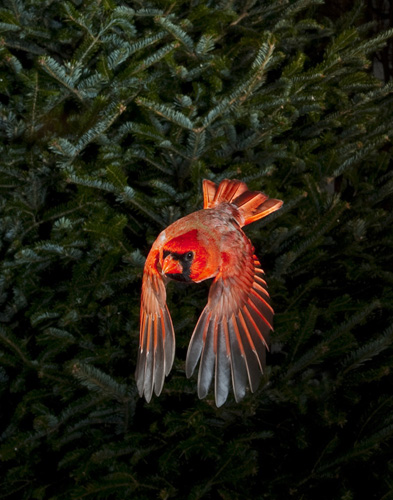 Birds are singing a happy tune after a doleful disaster. Last Friday, Scotts Miracle-Gro, the company best known for greening lawns across America, was fined $12.5 million for violating the EPA’s pesticide laws: The company illegally applied insecticides to its wild bird food products—insecticides, it turns out, that are toxic to birds. It also falsified pesticide registration documents and distributed pesticides with misleading and unapproved labels.

The chemicals that laced the bird food—Actellic 5E and Storcide II—were apparently used to ward off insects during storage. This use, however, is prohibited by the EPA. From 2005 to 2008, the company sold more than 70 million units of the bird food, branded as Morning Song and Country Pride. Scotts eventually recalled the products in March 2008.

“Scotts’ behavior was outrageous, and they’ll pay with consumers’ trust. This strong action by the Environmental Protection Agency and Department of Justice is very important: It says that if companies harm birds or people, they will have to pay for the damage they cause,” said Audubon President and CEO David Yarnold, in a press release.

“Millions of Americans—my own family included—enjoy feeding birds in our yards and communities, and we should be able to do so without fear. In fact, by providing food, water and shelter and by reducing or eliminating pesticides and gardening with native plants, we can help birds and our communities thrive.”

The company acknowledges its negligence. “We have learned a lot from these unfortunate events,” wrote Jim Hagedorn, Chairman and CEO of the Scotts Miracle-Gro Company in a letter to the public. “New people and processes have been put in place to prevent them from happening again.”

In the letter, Hagedorn also addressed the falsified pesticide registration, which was conducted by a an associate no longer with the company.

“The former associate in question has acknowledged that she acted alone and has pleaded guilty in federal court to federal crimes related to these actions,” he wrote.

On the other hand, Hagedorn doesn’t have any excuses for the bird food disaster. He admitted that the company took full responsibility for the pesticides in the food that led to a voluntary recall of the products.

As part of the agreement, Scotts Miracle-Gro will pay a $4 million criminal fine, a $6 million civil penalty, and will complete environmental projects valued at $2 million to acquire, restore, and protect 300 acres of land to prevent runoff of agricultural chemicals into nearby waterways.

In addition, the company plans to contribute $500,000 to organizations that protect bird habitat. After scouring the state, the company decided on five that will reap the benefits, including Ohio Audubon’s Important Bird Area Program, which will receive $100,000.

“We had no idea it was Scotts when they first put out feelers,” said Christie Vargo, the director at Grange Insurance Audubon Center in Ohio, when she described the initial contact that she had with the company’s attorney.

Ohio Audubon plans to discuss Important Bird Areas (IBAs) with the community and spend the money on protecting critical habitat.

“We are looking at IBAs that might have potential for a global status and also IBAs that are particularly vulnerable that really might have a chance of making a difference,” said Vargo. “We’re really looking to chapters and members of the community to develop conservation plans and implement those and reinvigorate the monitoring of those IBAs.”

Tragically, these seeds of hope have sprung from poison.