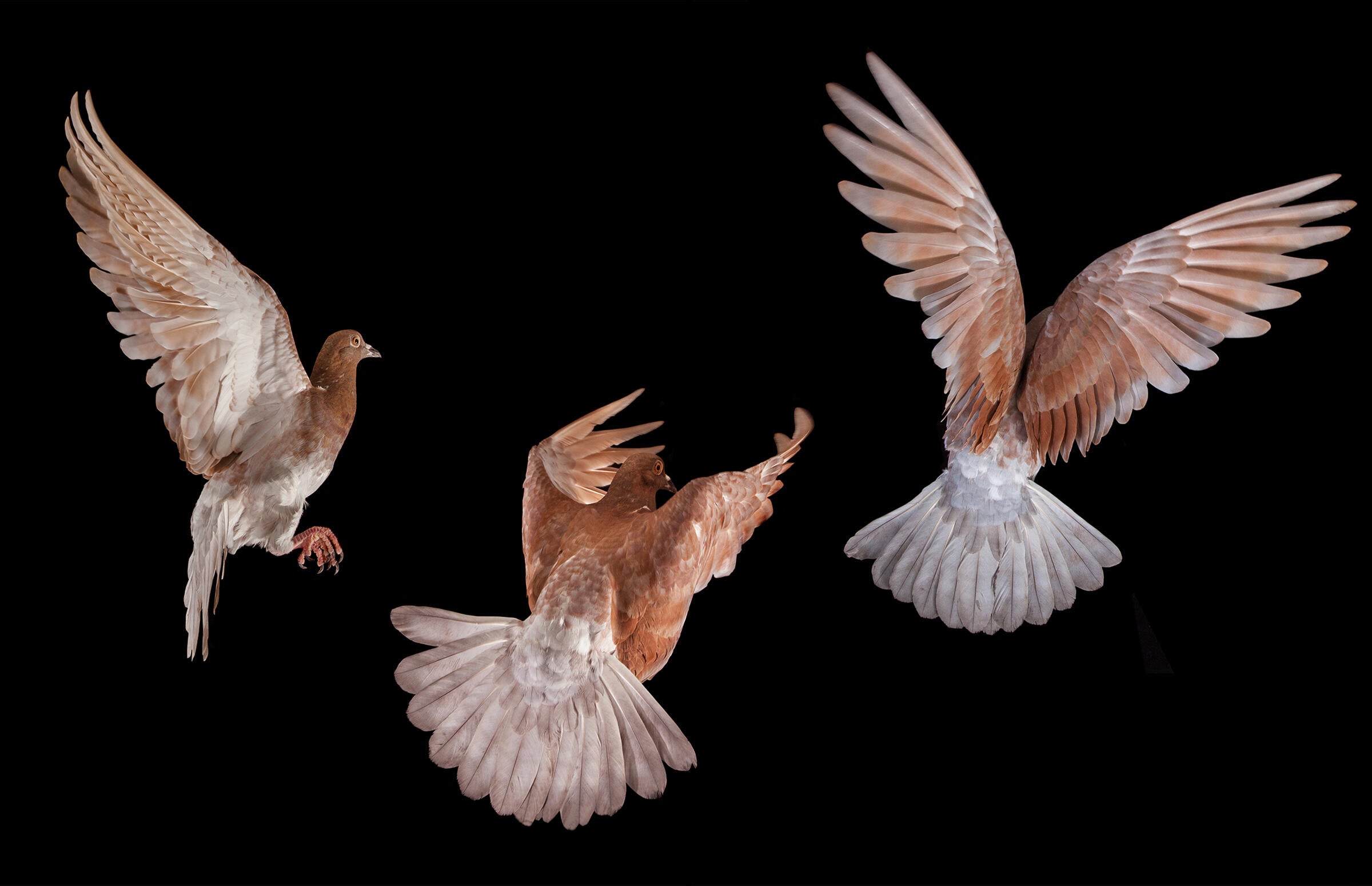 To many New Yorkers, pigeons are just a step above rats—pervasive and germy. Not to photographer Andrew Garn. “The problem is that there are just too many pigeons,” says Garn. “If they were rare, people would see them differently. I see them as jewels.” He’s dedicated the last eight years of his life to capturing the true essence and personality of these everyday birds in a series of up-close portraits—six of which are currently on display in Brooklyn Bridge Park.

A lifelong New Yorker, Garn never really gave the seemingly insipid city birds a second thought—he was too busy photographing flamingos and hummingbirds (and other species—he's always loved birds), along with architecture and street life. Then, in 2008, Garn found himself stumped about what subject to shoot for an upcoming exhibit in Williamsburg. When he saw a pigeon fly across a building façade, he was suddenly intrigued, finding an attractive challenge in the birds’ mediocre reputation.

“It’s easy to photograph something that is already considered beautiful, like a flower in a meadow, but harder to focus on something that is seen everyday,” he says. After six months of photographing and videotaping pigeons—even making sculptures and paintings of them—Garn ended up falling for the species, which he considers to have personalities as distinct as their coloring. “Some are shy, some are bold, some are sassy,” he says.

For example, meet Dr. Brown (yes, most of Garn’s pigeons have names). At first glance, this fella looks just like any other NYC bird. But when the light is just right, Dr. Brown’s feathers show off the color palette of a peacock—shiny greens, metallic plums, and glossy silvers. A resident of the Wild Bird Fund’s rehabilitation center, Dr. Brown became New York Magazine’s saucy cover boy when Garn’s pigeon pinups were published last year. “He obviously had attitude,” says Garn.

Then there’s Fido—an injured baby nestling who came to WBF a few years ago. The staff and volunteers immediately fell in love with the friendly bird, who followed people around like a tiny, bobbing shadow. Fido grew up with no sense of wilderness (or, in pigeons’ case, street smarts), and prefers not to fly. Unable to release him back to the bustling city, WBF passed Fido on to a foster family who currently cares for 35 other pigeons. To Garn, Fido isn’t just a bird—he’s a survivor with a great sense for comedy.

Some of Garn’s hundreds of models are photographed in situ in Manhattan, while others come from rehab centers or private home coops. (Access is easy because Garn works as an injured bird transporter for the NYC Audubon chapter.) He’s amassed over 9,000 exposures of the unappreciated birds.

“Sometimes it seems as if they are striking a pose—like they are on a runway,” he says.

Dr. Brown, Fido, and others are getting plenty of attention at Brooklyn Bridge Park’s Photoville FENCE exhibition (Photoville, an organization that produces site-specific installations, is also displaying the images in Boston, Atlanta, and Houston). When I visited the FENCE with Garn in August, though, it was obvious that one viewer was less than impressed—Garn’s Welsh Setter, Platypus, promptly urinated on the fence right below Garn’s work. (Garn found this hilarious.)

Later, while walking along the East River as Platypus frolicked in nearby sprinklers, Garn reflected on pigeons’ unique place in society. “A lot of people love birds but wouldn’t give pigeons the time of day,” he said, snacking on jellybeans from an Altoids box. But many city dwellers love them: “On any given day in a New York park, I have observed a diverse set of people feeding the pigeons or allowing the birds to perch on them. I have seen young girls, the man from the halal food stand, and older people of all walks of life interacting with the pigeons.”

Garn’s images make a convincing case. And after all, pigeons are technically doves. And some are even Madonna impersonators (see below, captions courtesy of the photographer). 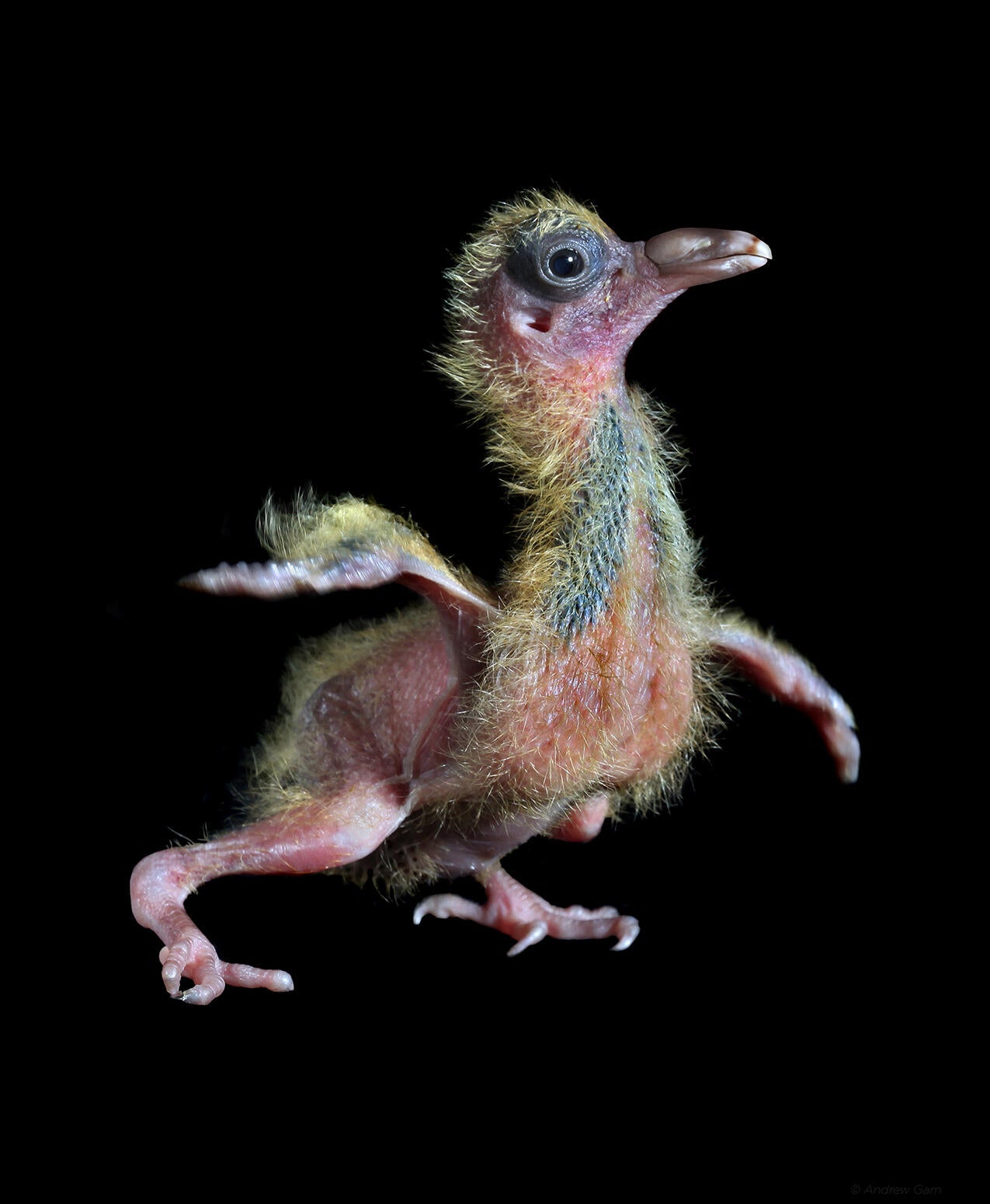 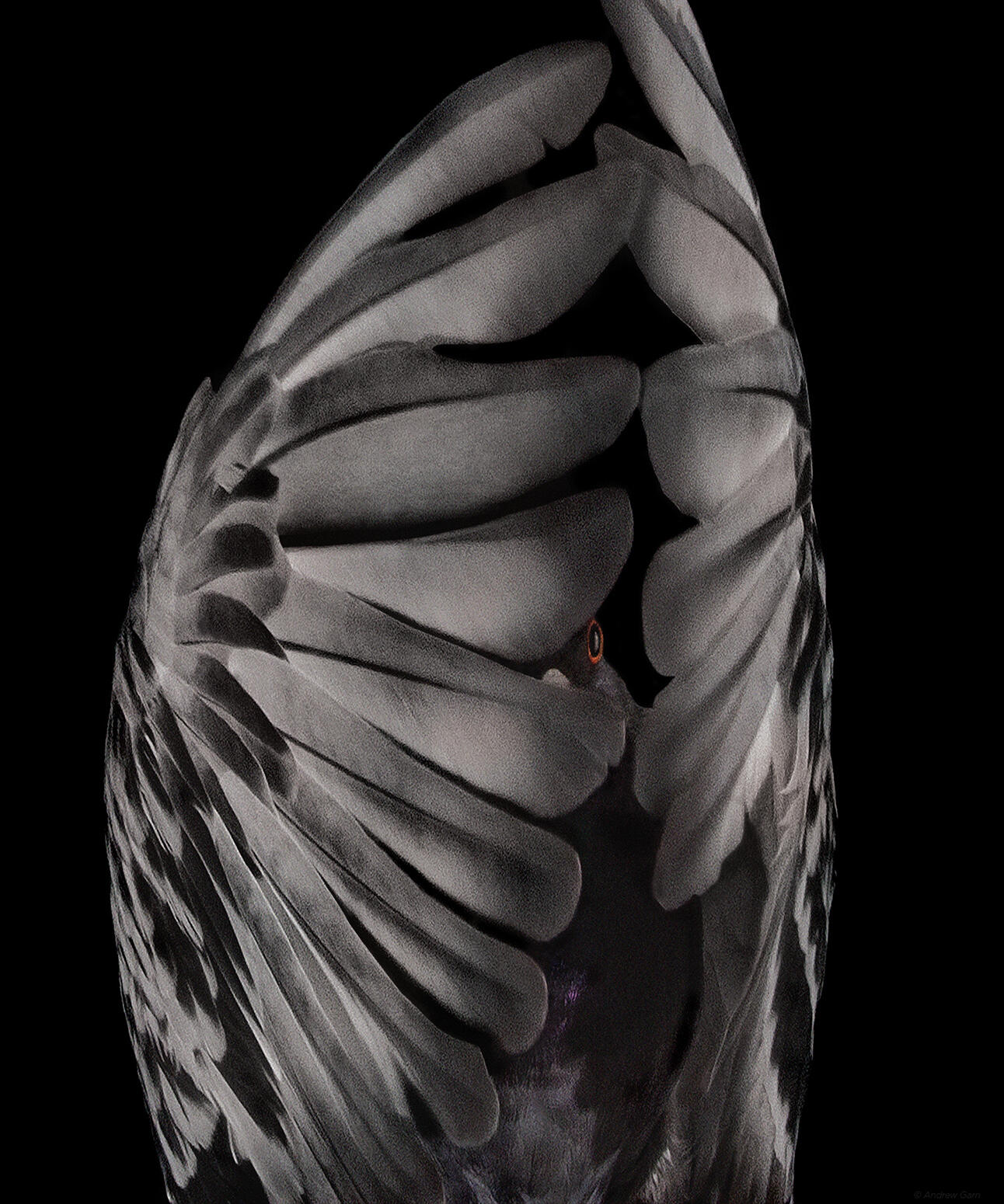 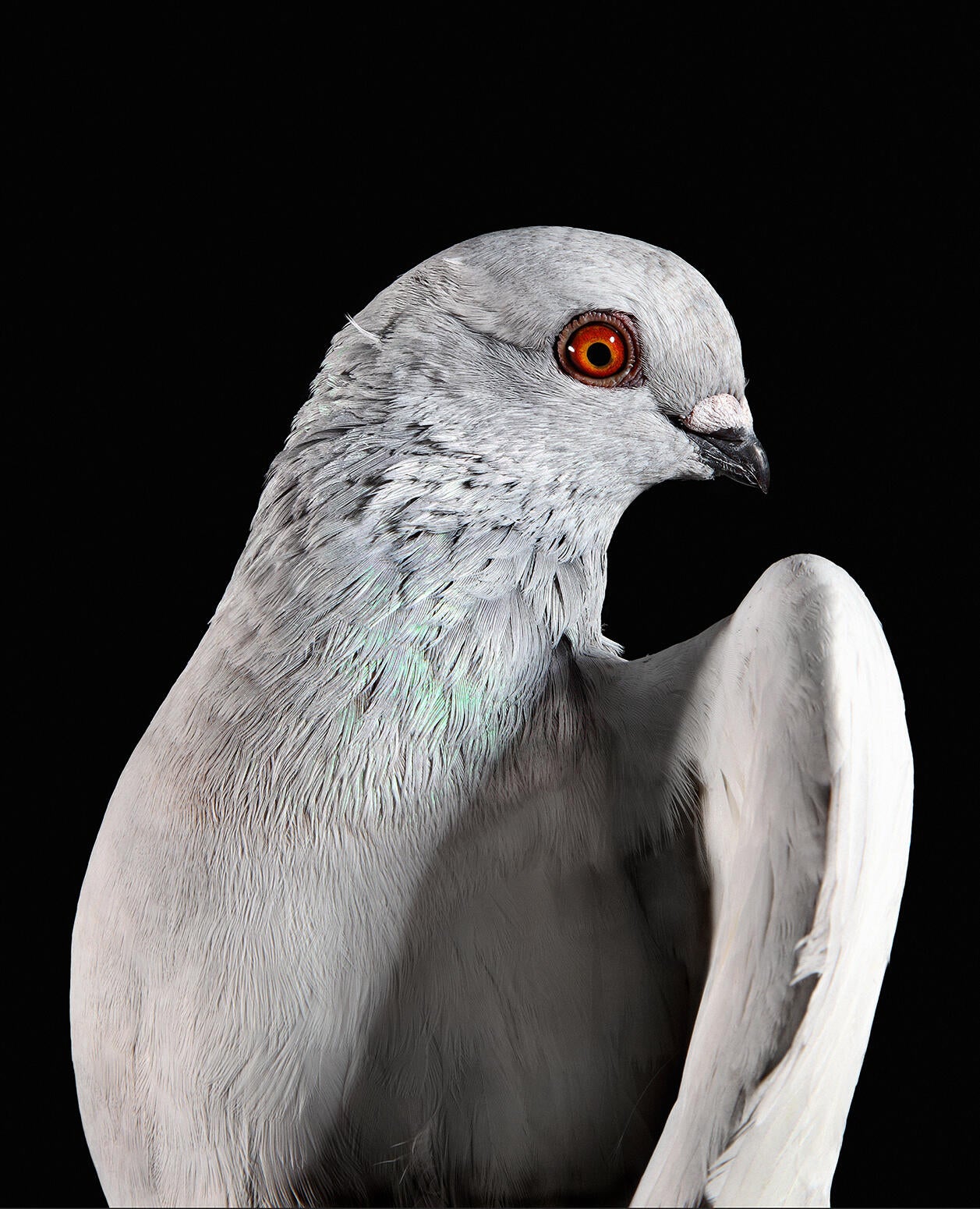 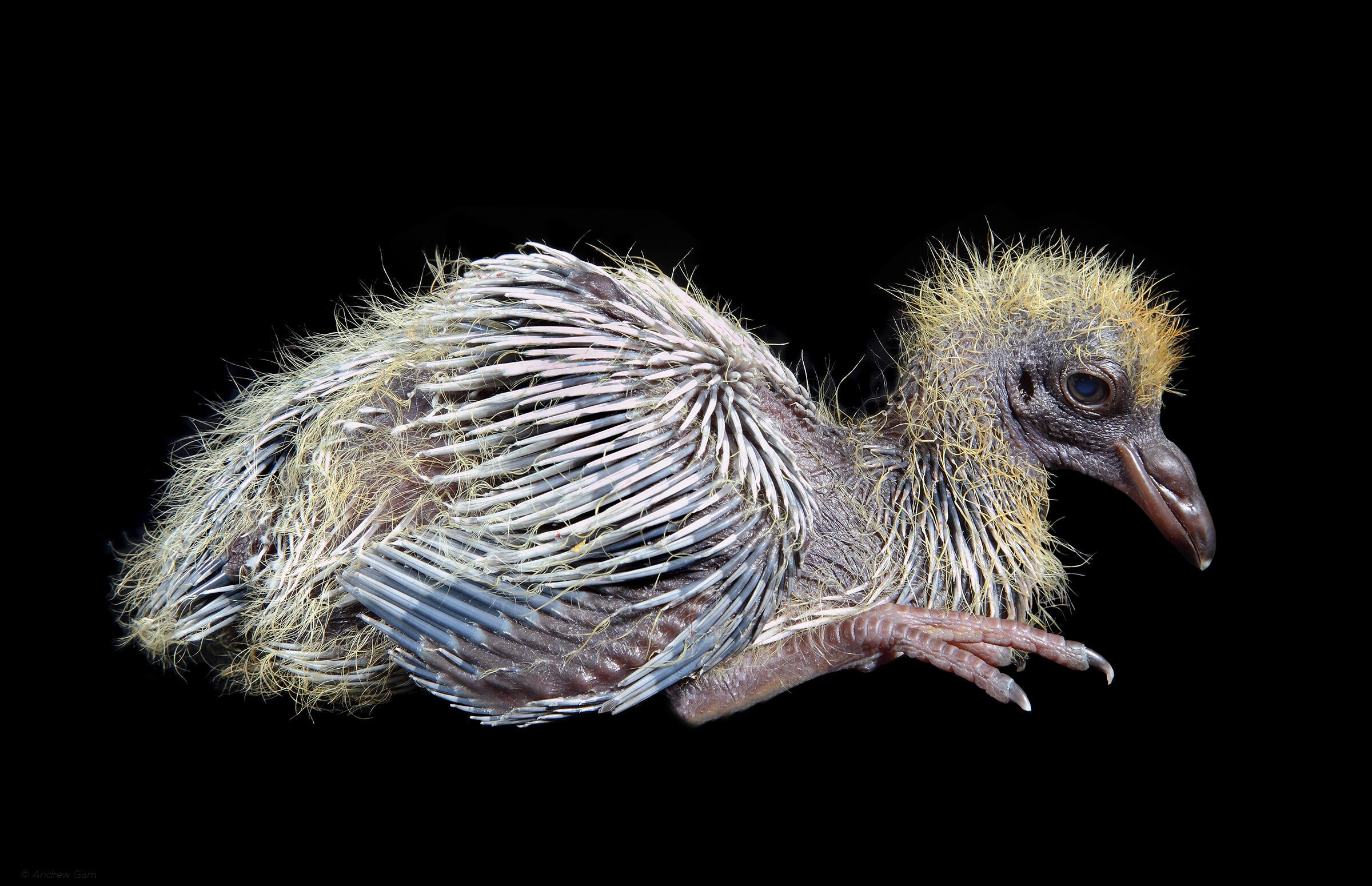 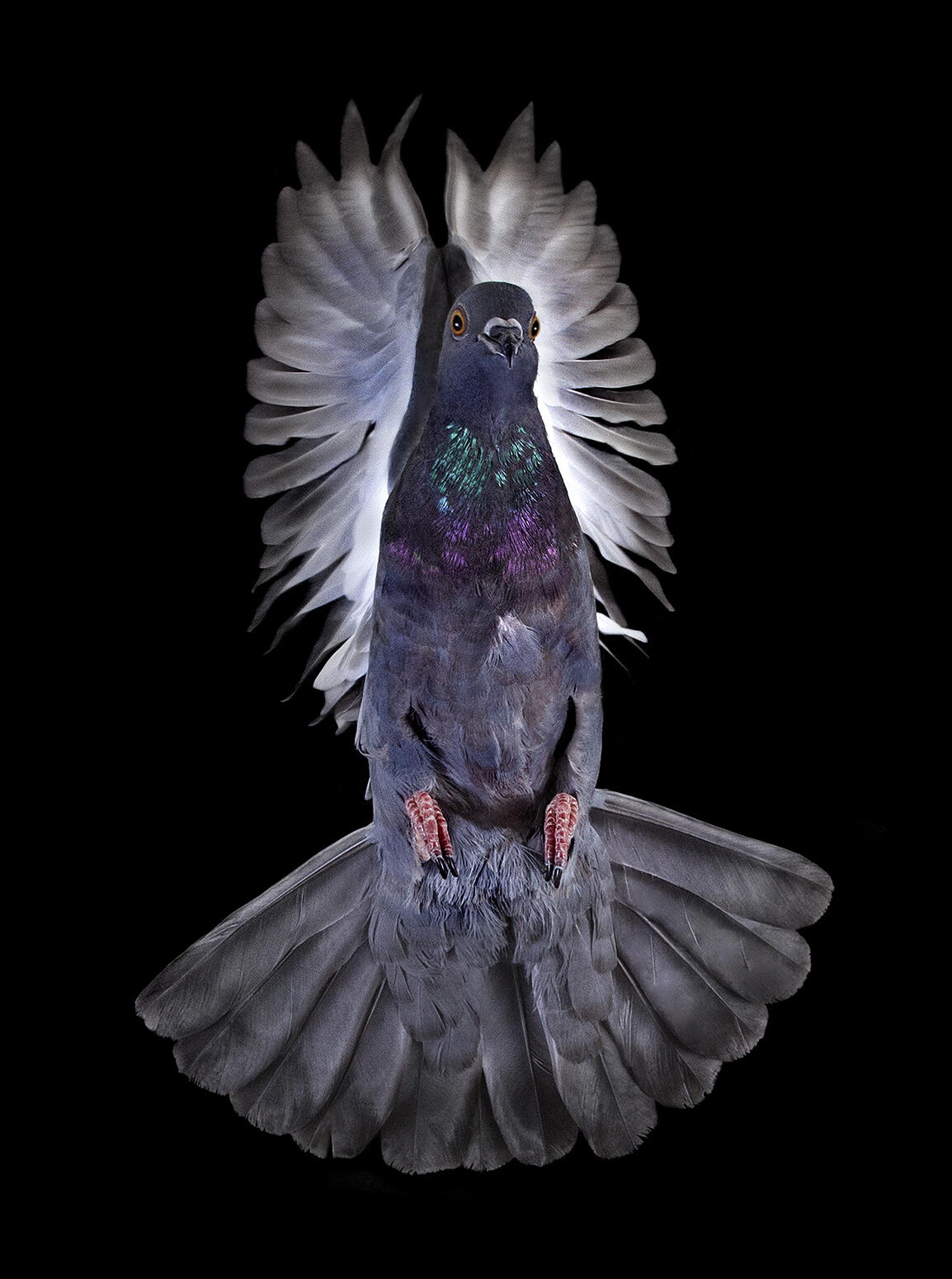 Editor's Note: For inquiries about prints, please contact Andrew Garn at andrewgarn1@gmail.com (50% of all proceeds will be donated to the Wild Bird Fund).