Drawing from science that connects modern birds and ancient dinosaurs, the David Attenborough-narrated Apple TV+ show was influenced by avian biology and behavior at every step.

A bull Tyrannosaurus sculls across the shallow warm waters of an inland sea, a gang of fluffy chicks in tow. His great chest labors with powerful snorting breaths, his chin wavering with the effort of keeping his head above water. Some months previously, the bull courted a female who wandered into his territory, arching his chin in a coy welcome; now he’s got babies to care for as he leads them across dangerous waters in search of new opportunities.

This is the image that opens Prehistoric Planet, an astonishing new five-part documentary miniseries airing this week on Apple TV+. Hosted by David Attenborough and filmed by members of the acclaimed BBC Studios Natural History Unit, the show offers a wide-ranging tour of the earth's landscape 66 million years ago, crossing the lush forests and polar crags of western North America, the baking deserts of Central Asia and South America, and the flooded islands of Europe.

The Tyrannosaurus scene, rendered in remarkably crisp and convincing CGI, serves as a deliberate statement of purpose: The earth’s largest land predator is presented not as a roaring, malevolent monster or vehicle for blockbuster nostalgia, but as a living, breathing—and very birdy—animal.

The past few decades have solidified scientists’ understanding that modern birds are essentially dinosaurs, descended from a single branch of the predatory dinosaur family tree. The relationship was initially proposed back in the 1800s, based on the discovery of feathered dinosaurs like the famous “dawn bird” Archaeopteryx. A concerted reassessment of dinosaurs in the late 20th century, complete with the discovery of new, well-preserved fossils from across the world, basically confirmed the theory. Today, researchers have shown that many predatory dinosaur species were likely feathered, and that plumes of one sort or another may have been widespread across the family tree.

In Prehistoric Planet, small, down-toed dromaeosaurs sweep through snowy forests like ground-running falcons. Immense, shaggy behemoths like the hump-backed Deinocheirus graze in inland swamps. Even the mostly scaly Tyrannosaurus rex has a subtle dusting of fine, elephant-like fuzz, visible only in closeup; its young, like the chicks of modern ground birds, are fully fluffed. 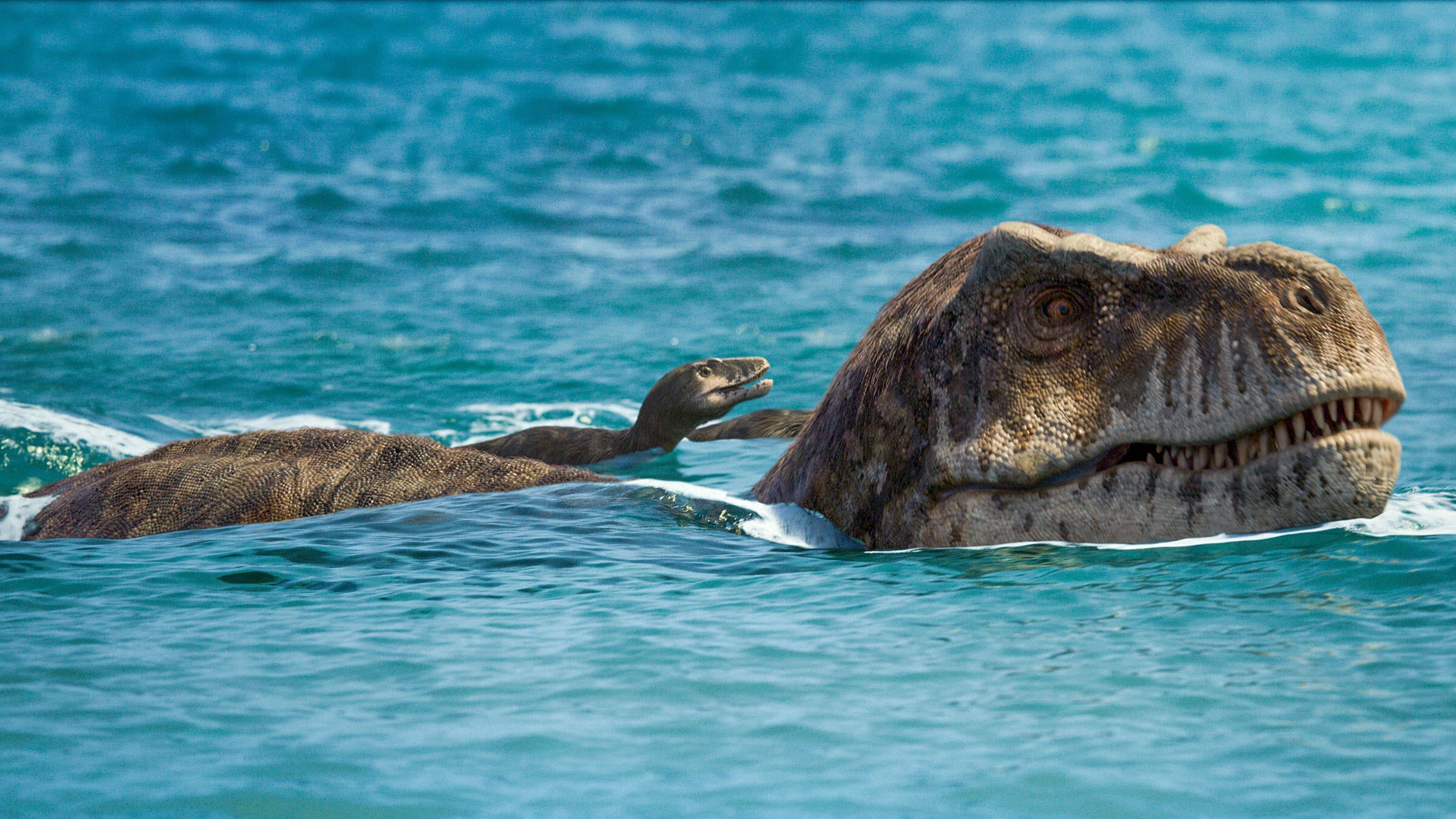 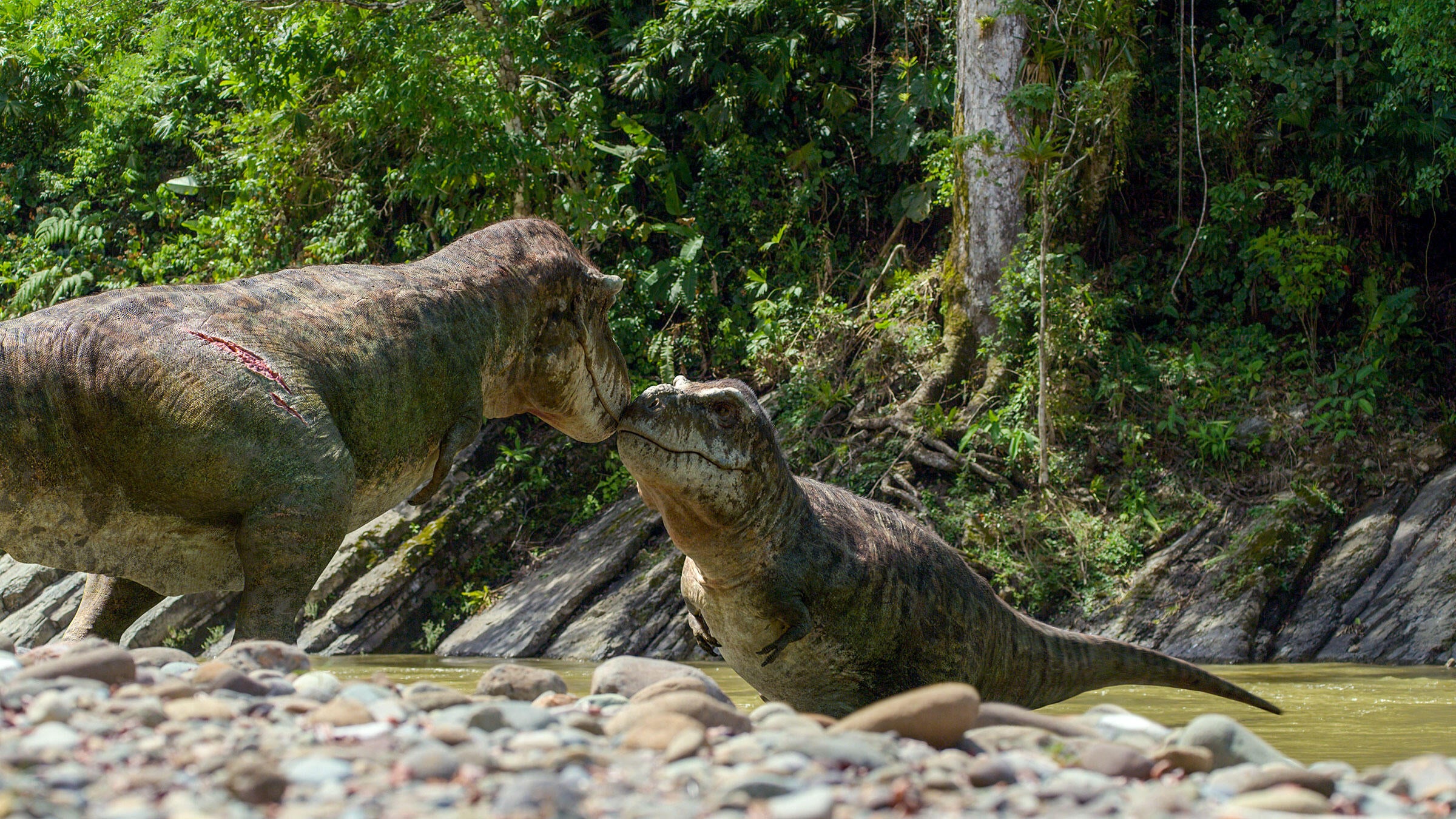 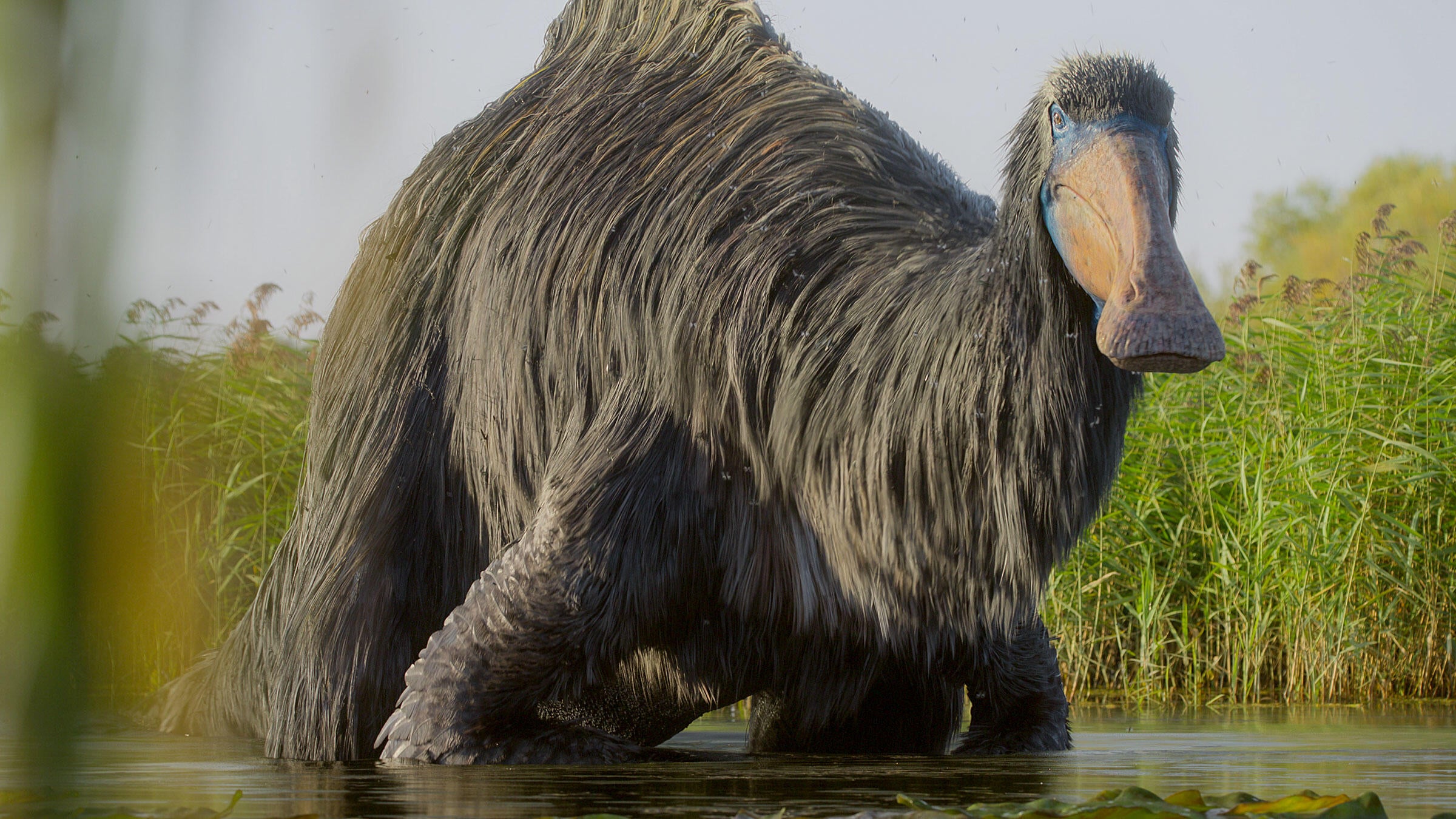 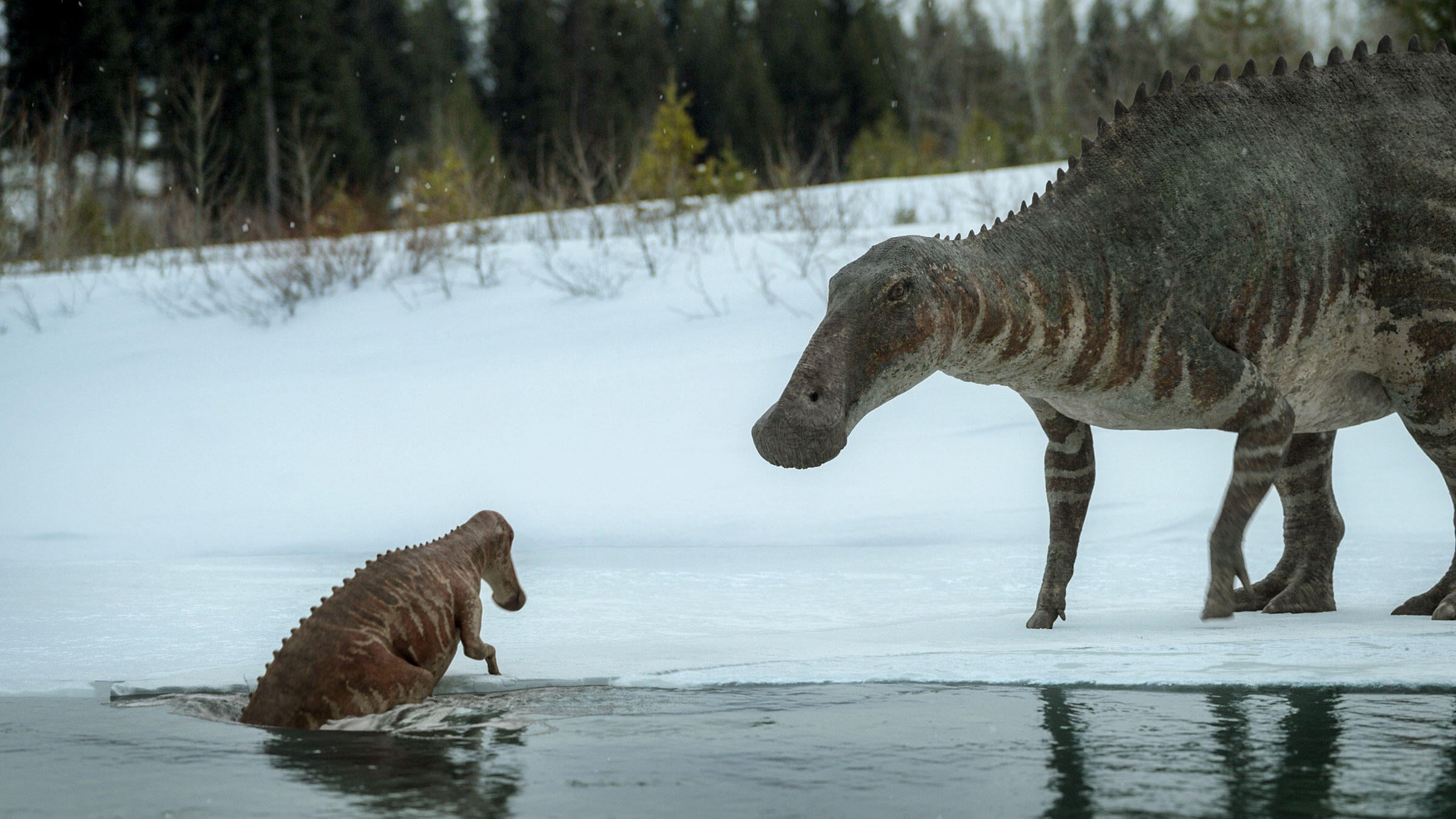 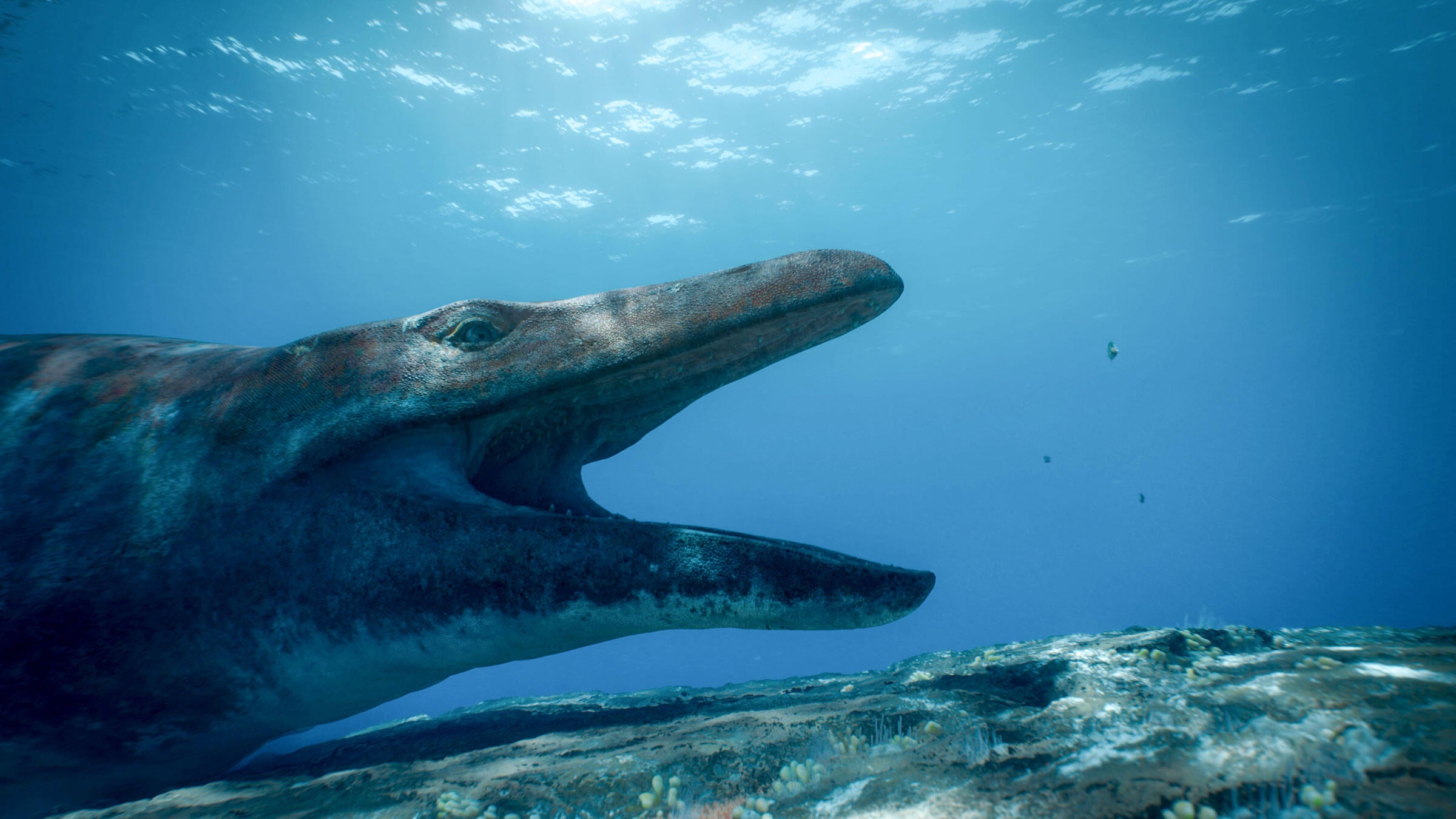 The series is also notable for the range of creatures it covers. Each episode stars a blend of familiar and obscure dinosaurs, sea lizards, and pterosaurs (flying reptiles), as designed by a small army of paleoartists. All are presented according to the latest scientific research and showcased exhibiting their own interesting bits of behavior: finding mates, migrating, searching out food and water, or dealing with the age-old scourge of mosquitoes.

“Every decision we've made is backed up in some way by the actual evidence that exists,” says Darren Naish, a paleontologist with the University of Southampton who served as lead scientific consultant for the series. The show didn’t limit itself to fossil evidence, either—modern dinosaur relatives provided inspiration as well. “If we found behaviors in living birds that were also seen in living crocodilians, we applied them to extinct dinosaurs.”

Various episodes present behaviors modeled from avians: the parrot-like use of clay-eating to neutralize toxins in food; the penguin-like thievery of materials in communal nests; and even the habit—famously reported in some Australian raptors—of intentionally spreading fires to smoke out prey. When figuring out their dinosaurs’ postures, Prehistoric Planet’s team looked to the oldest living bird lineages—flightless birds, waterfowl, and wildfowl—which often share body language with crocodiles. “There's this whole system of specific postures that indicate particular things,” Naish says, such as fear, submission during combat, or the fact that an animal is hunting.

In a scene set in “Forests,” the show’s fifth episode, the short-armed, bullhorn predator Carnotaurus performs for a mate. For this scene, the filmmakers drew on the specific dance steps of a North American grouse while borrowing the booming grunts of a Cassowary. Flightless birds also informed the show’s depiction of Tyrannosaurus fathers as the primary caregivers for their tiny, fuzzy young. The body language of geese, meanwhile, provided a guide for a scene in the third episode, where a pair of Tyrannosaurus engage in surprisingly careful and tender courtship—as well they might, considering their bone-crushing jaws and the disastrous implications of a missed social cue.

Show creators also took inspiration from modern bird anatomy. Take Mononykus, a tiny, single-clawed and extremely cute feathered dinosaur from the deserts of ancient Mongolia. The show reconstructs it with a Barn Owl-like “facial disk” of feathers. It’s not just a fanciful bit of decoration: Research published last year showed that the inner-ear anatomy of Mononykus and its relatives closely resembled those of modern Barn Owls. This discovery, combined with Mononykus’ large, owl-like eyes, suggested that the little dinosaurs could have had a similar facial structure, which helps funnel sound to the inner ear. 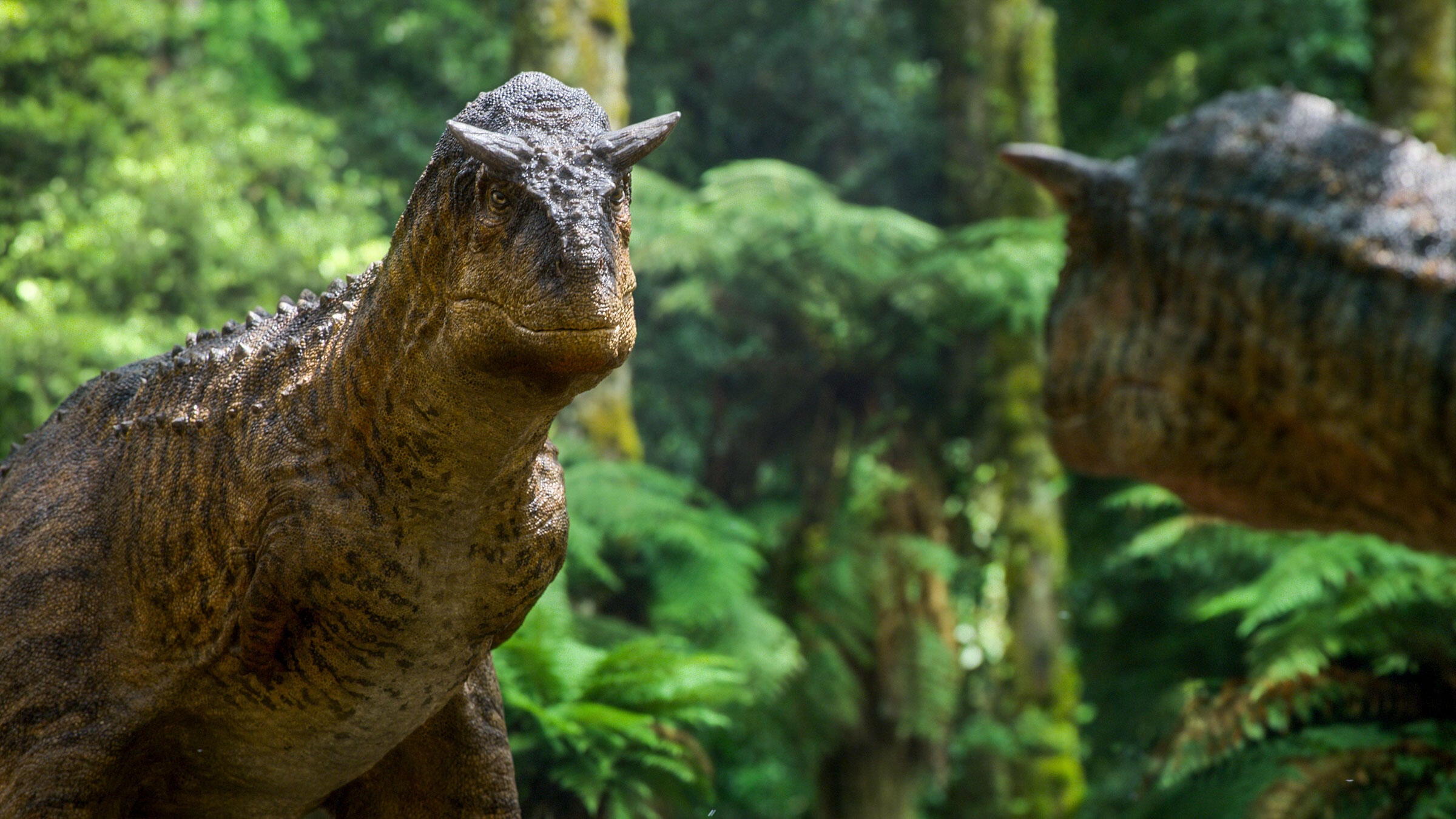 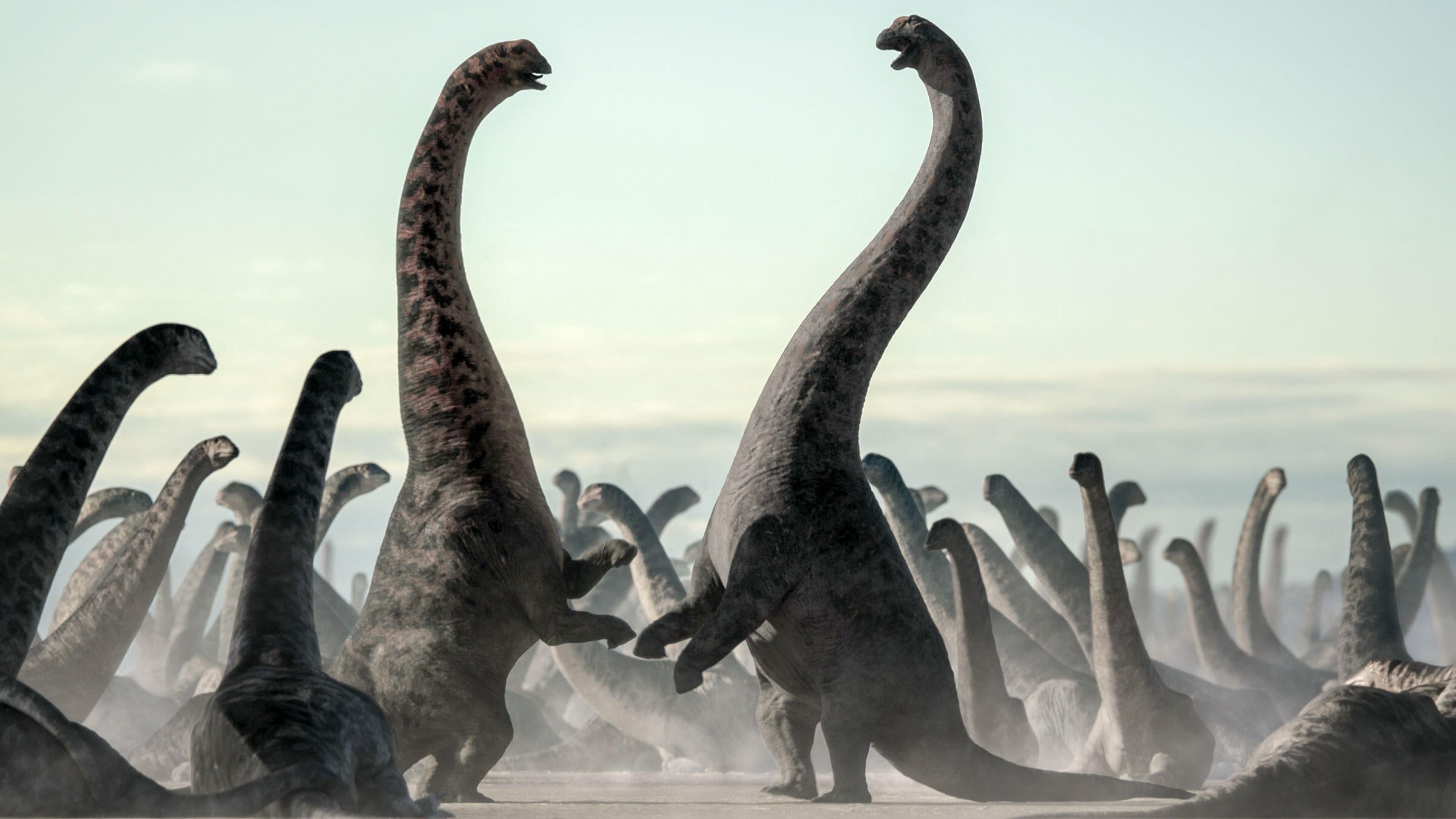 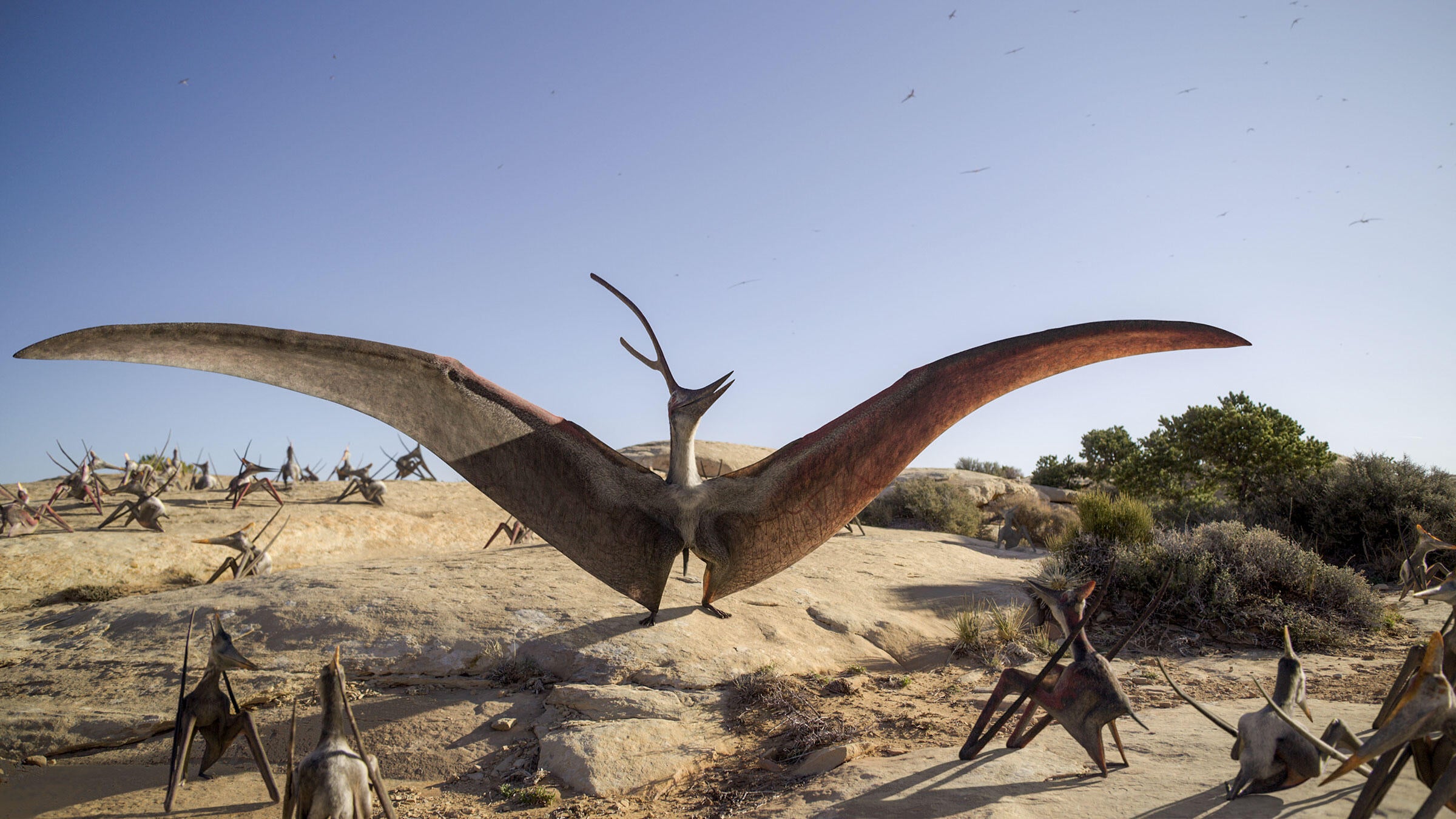 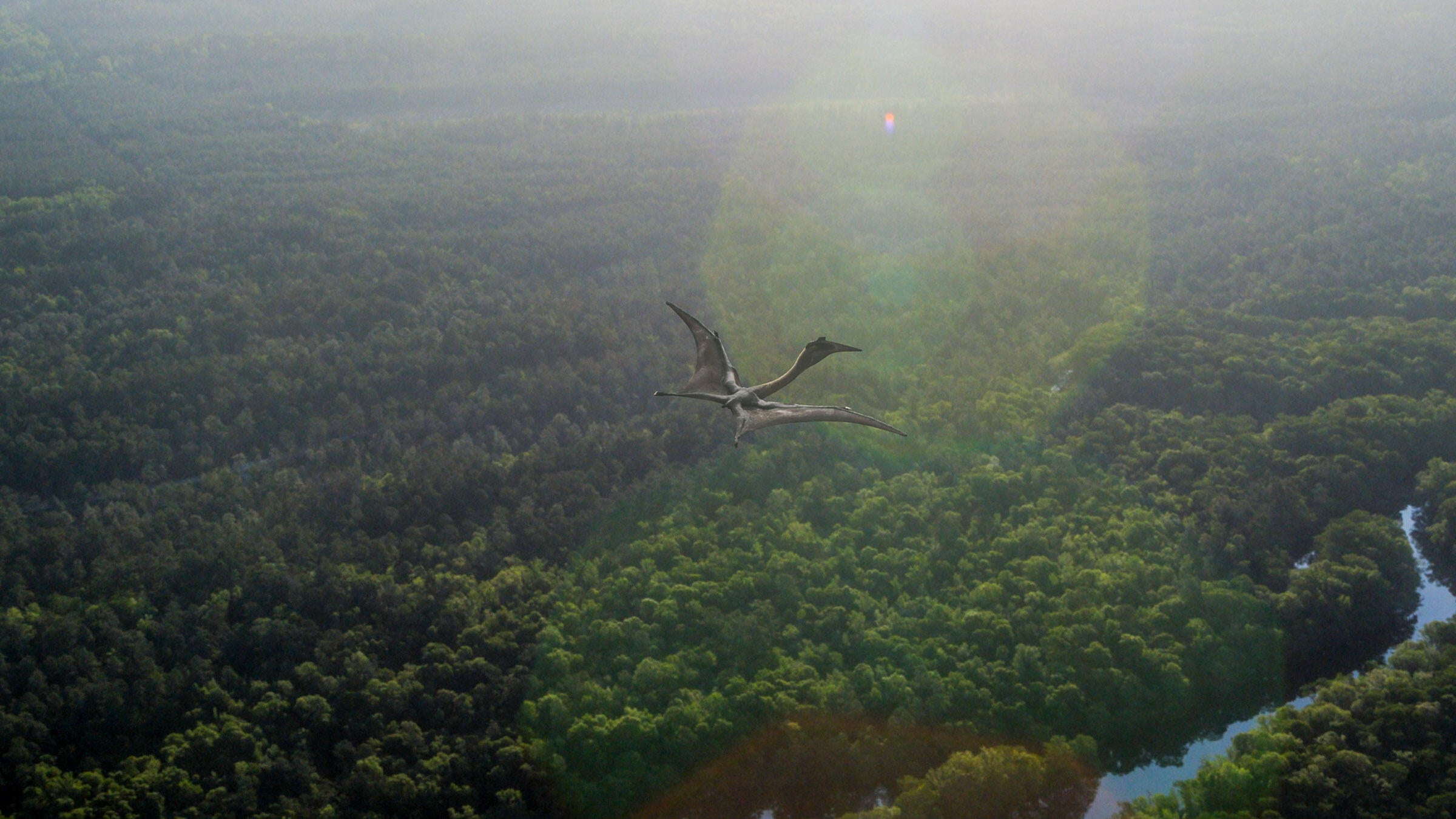 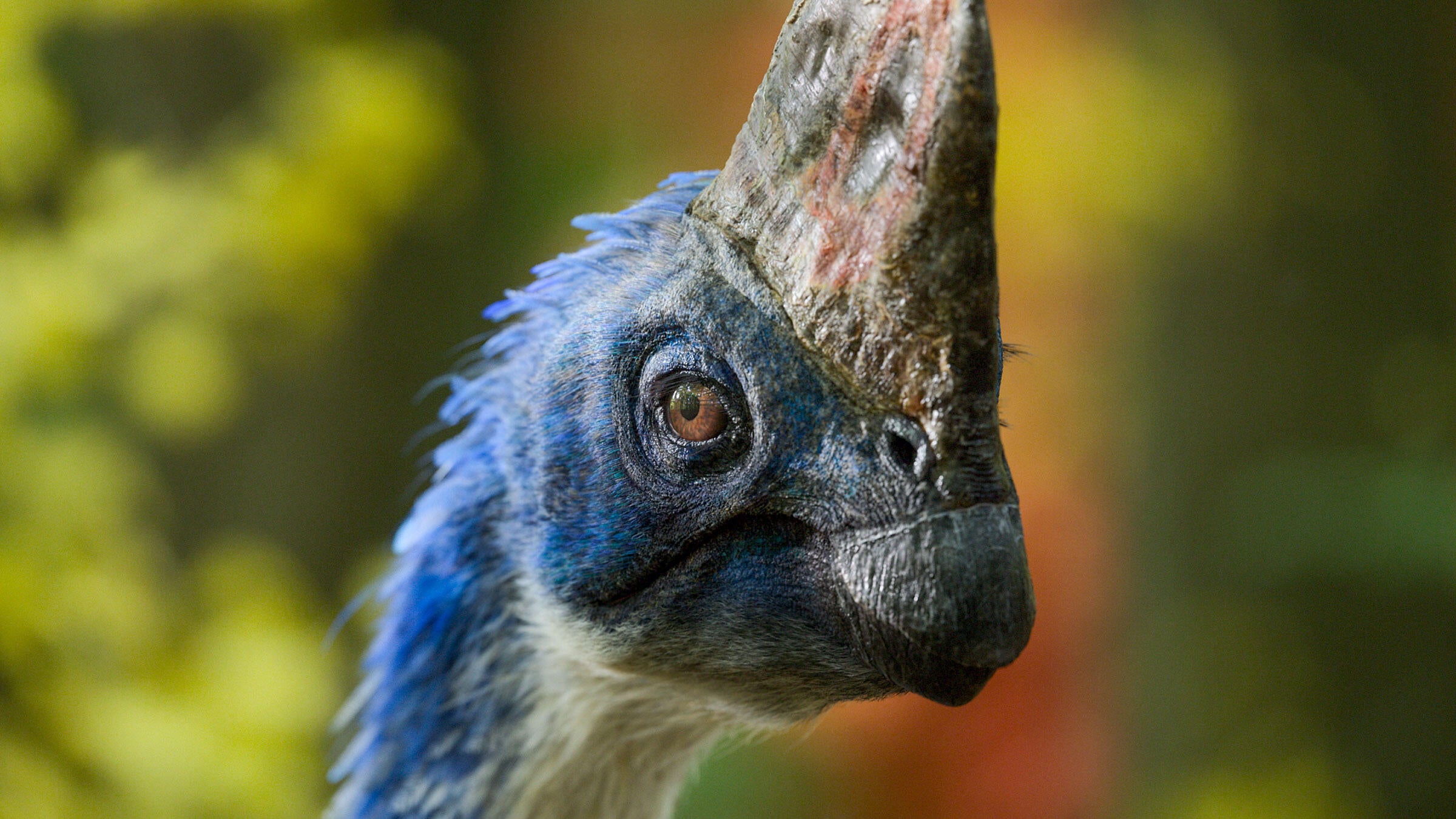 Extrapolations from bird anatomy and behavior also contributed to Naish’s favorite sequence: a pair of long-necked, 80-ton titanosaurs in bruising battle, surrounded by a crowd of keenly observing females. It’s the sort of lek behavior seen in modern birds like prairie-chickens, where males gather to beat the tar out of each other. And like prairie-chickens or frigatebirds, the bull titanosaurs are adorned with dramatic, inflatable throat balloons, which is a bit of speculation based on the existence of hollow air sacks in their massive neck vertebrae. It’s not the sort of thing you usually see long-necked dinosaurs doing onscreen, Naish says, “but there's a lot of indication that those animals really could indulge in ridiculous behaviors involving actual combat.”

Equal care was paid to how the show’s dinosaurs sound.

Equal care was paid to how the show’s dinosaurs sound. Reconstructing calls is difficult, Naish says, in part because there are few preserved examples of the sort of cartilaginous structures that gave dinosaurs their voices. This hasn’t exactly stopped anybody from trying, of course: Dinosaur roars have a long history in Hollywood, most influentially in 1993's Jurassic Park, which blended elephant, lion, and bird sounds to create a sonic template that has dominated mainstream dinosaur media ever since.

Prehistoric Planet takes a different approach. Originally, the team experimented with giving baby Tyrannosaurs the distinctive nyarp call of young crocodiles, Naish says, but that felt wrong—modern crocodilians belong to a lineage that’s been separate from their dinosaurian relatives for 200 million years. Instead, they designed specific blends of crocodilian and bird vocals—percussive rumbles, hisses, and chirrups—to create suitably archaic and strange-sounding dinosaurs.

The show’s focus on verisimilitude also extended to more technical questions, such as where to put the camera. The production staff shot the majority of scenes on location, which meant finding places that could conceivably fit herds of nonexistent dinosaurs. One challenging sequence centers on a seasonal oasis, tucked amid the dunes in the brutal heat of Cretaceous Mongolia. In it, a stunning cast of desert animals—multiple species of massive sauropod, shovel-billed hadrosaurs, strange scythe-clawed therizinosaurs, and those tiny, owl-faced Mononykus—gather to drink. The trouble wasn’t just in wrangling so many CGI dinosaurs convincingly, showrunner Tim Walker says, but in filming the actual location shots the way a natural history crew would—in some cases, with cameras nearly a half-mile away. 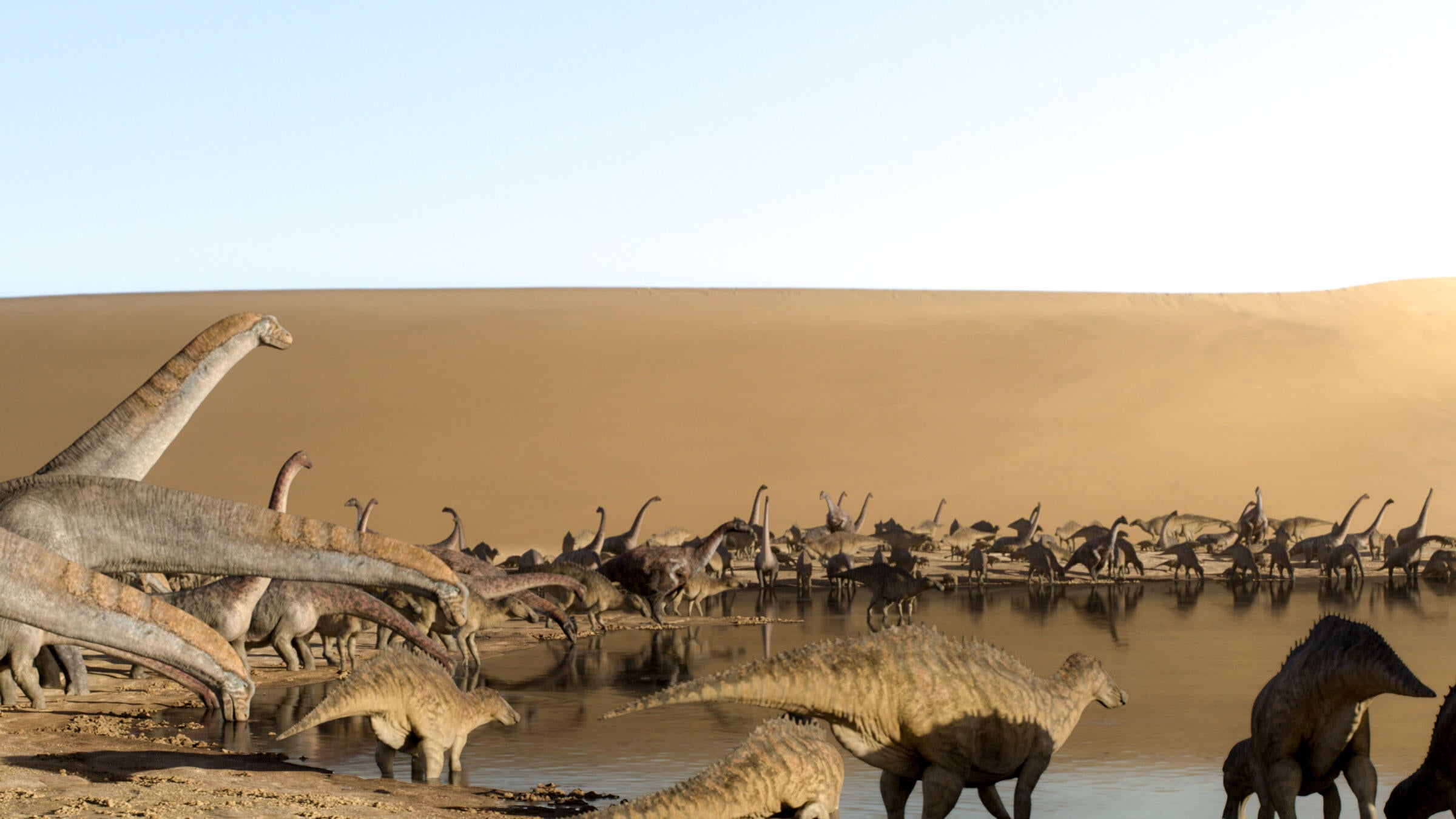 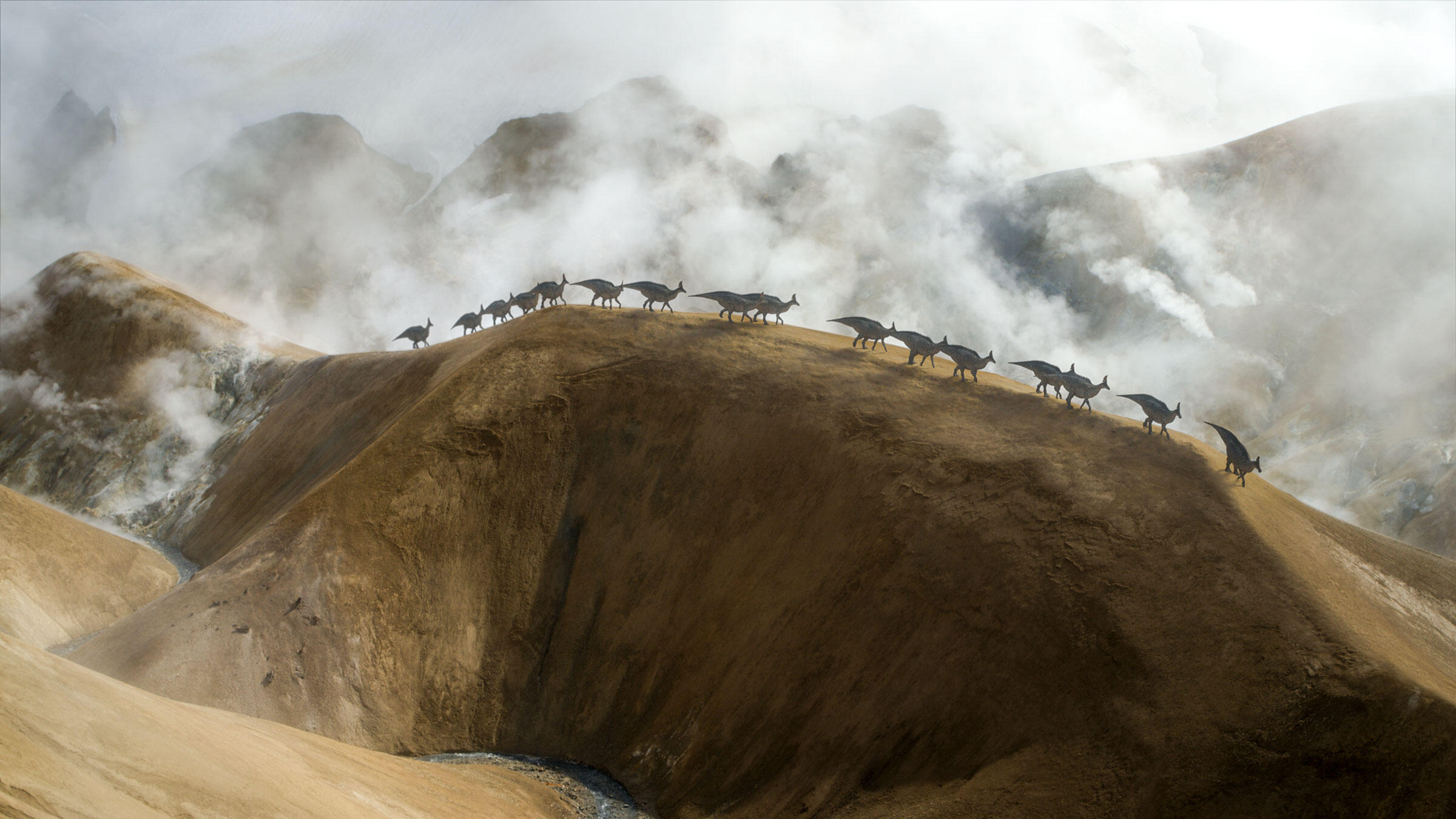 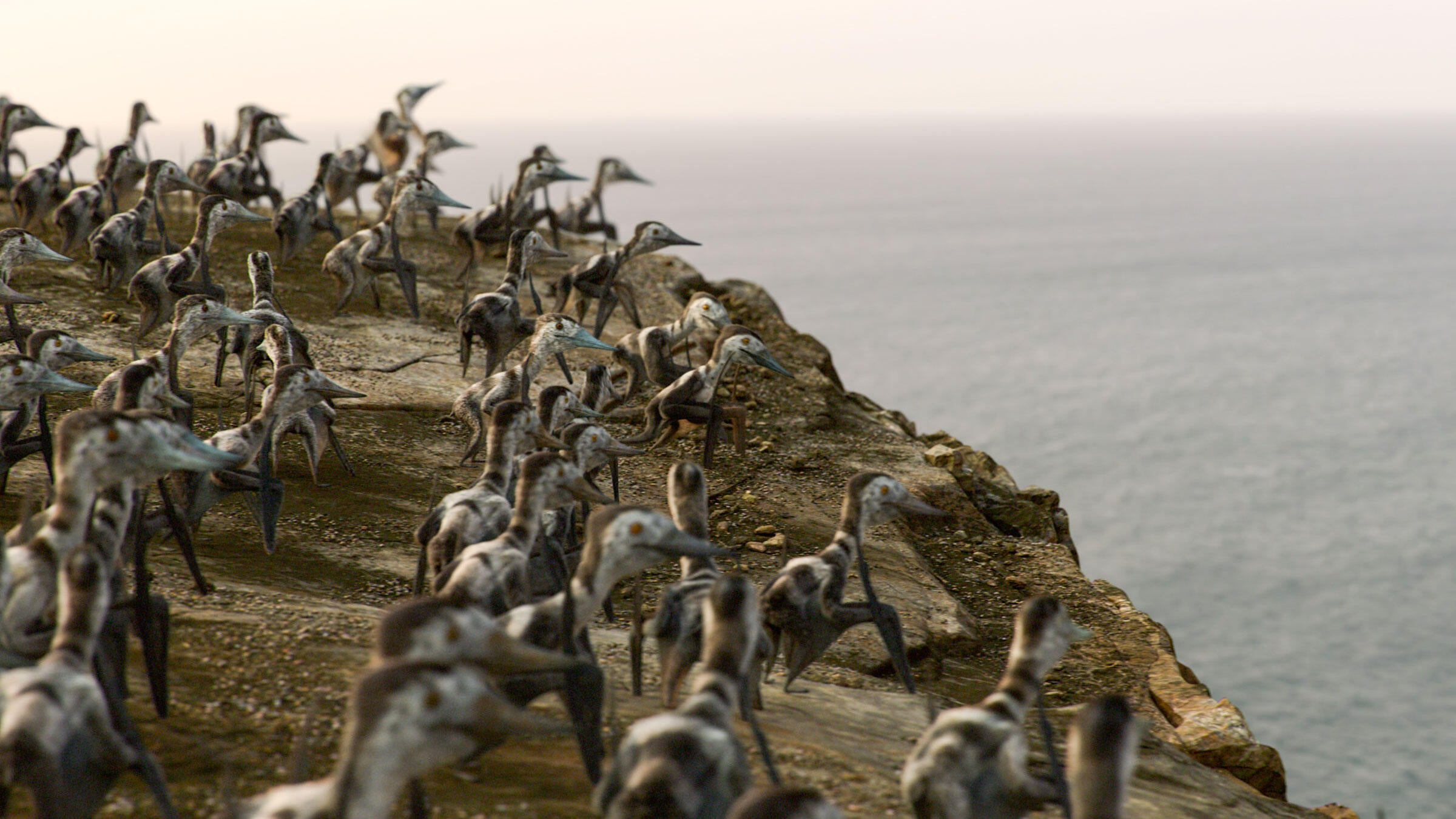 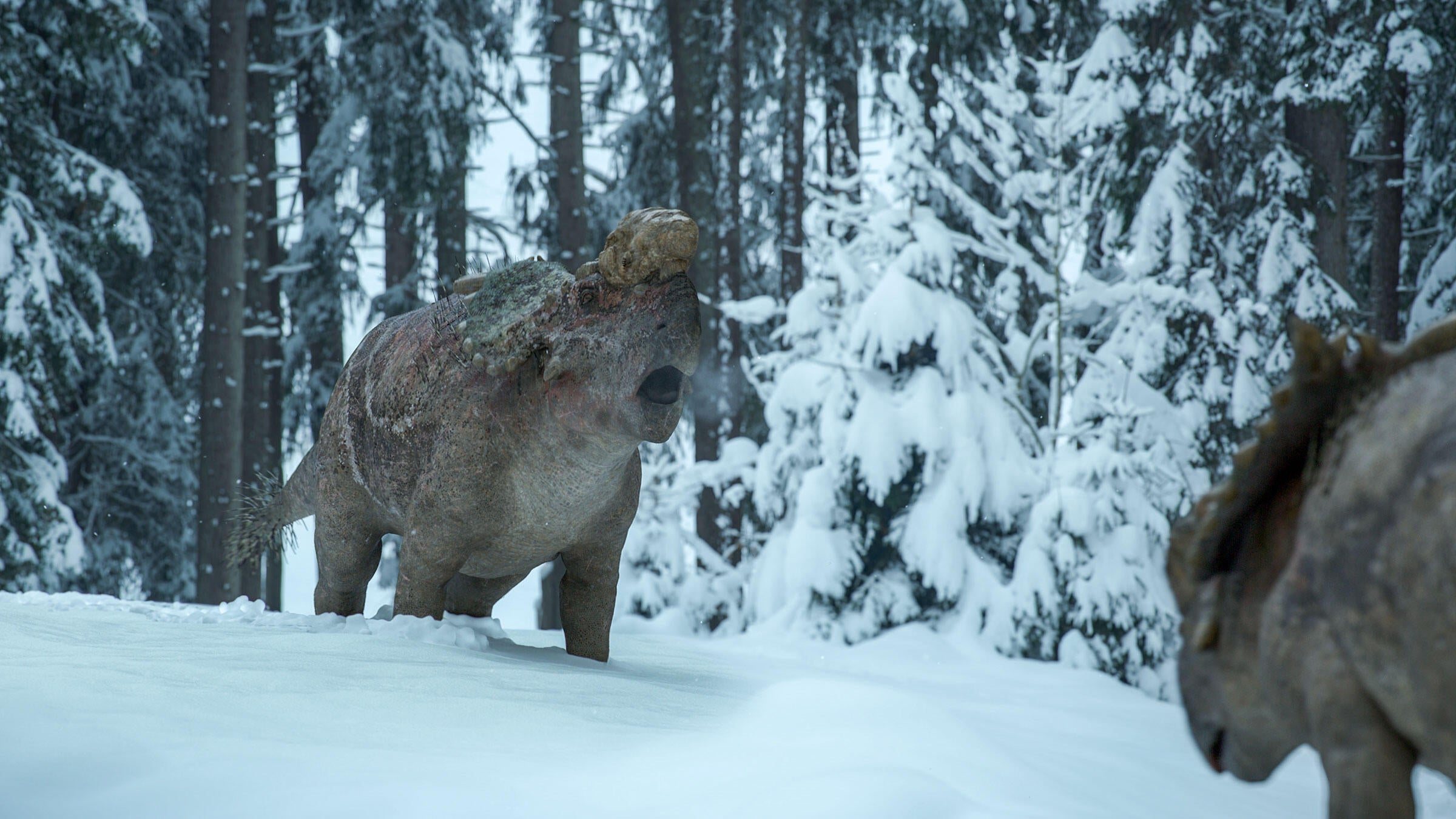 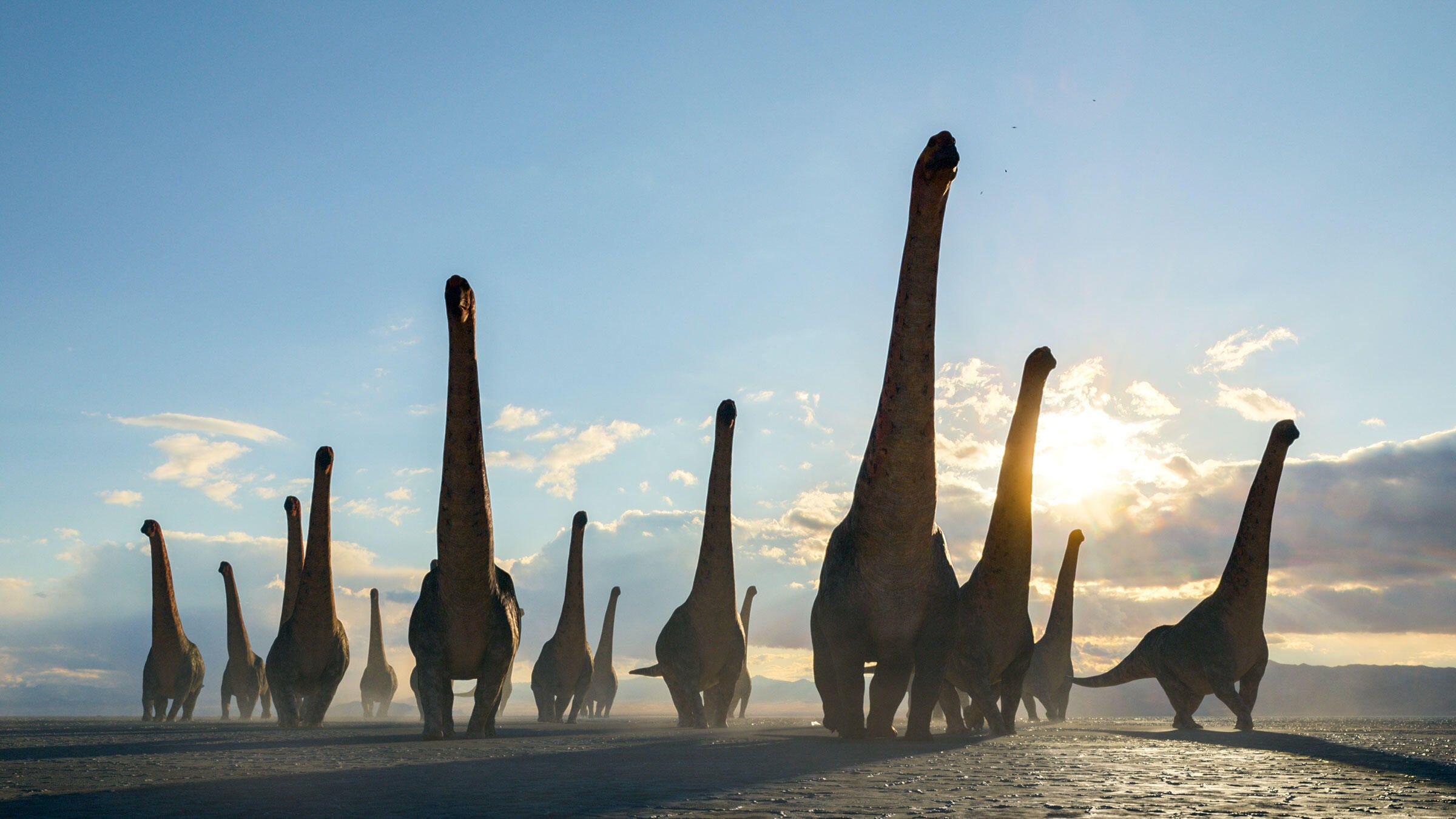 “There’s no way you can get close to those animals,” Walker says. “You’d have to film it on a really long lens, you’d have to be very careful where you’re at.”

The team’s experience shooting natural-history documentaries helps capture the distinct feeling of watching living animals, says Mike Gunton, the show’s executive producer. “If you spent a lot of your life watching animals through a viewfinder, you do study them in a way that very few people do—birdwatchers are a classic example. Something flies past and they know what it is just by the feel of it.” Prehistoric Planet’s goal is to capture those convincing little details—how an animal moves, how weight and posture shifts, the halting curl of a toe or flick of an eye. “I think quite a lot of what we’ve done just feels right.”

The attention to detail pays off. The peril of CGI dinosaur documentaries—or, indeed, of any CGI-dominated productions these days—lies in their effects coming off as cartoonish and unconvincing. While a few shots across the five-hour span of Prehistoric Planet look a bit ropy, the vast majority of the show is absolutely convincing, sweeping you up in the dramas on screen. It’s a vision of dinosaurs as many fans have longed to see them: strange and magnificent creatures glimpsed through the trees via binoculars or a documentarian’s camera. Animals that are birdlike, colorful, and indisputably, gloriously alive.

Prehistoric Planet airs its first episode on May 23 on Apple TV+, with subsequent episodes airing nightly.