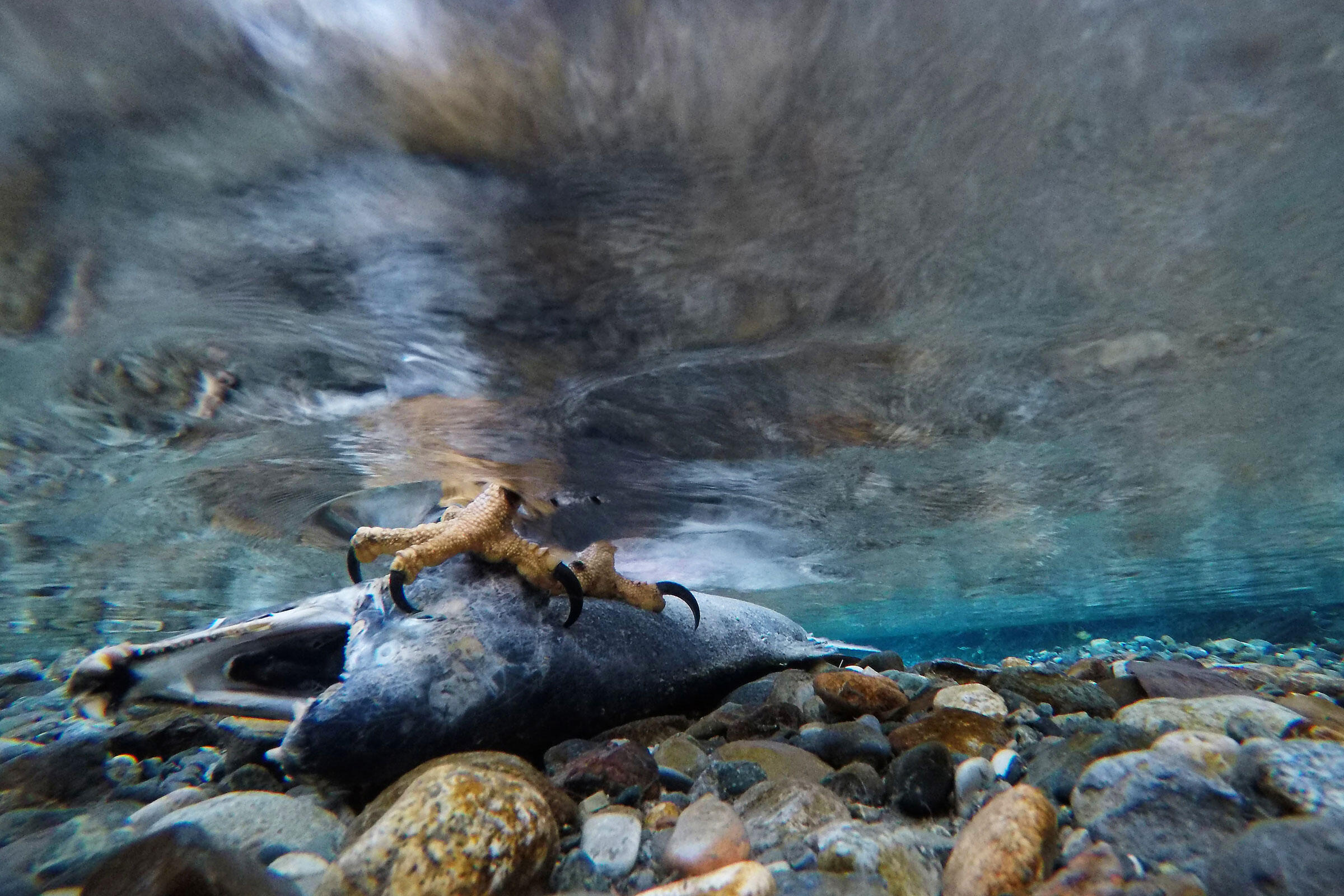 A Bald Eagle feeds on a spawned out chum salmon in a small spawning and rearing creek downstream of the proposed Constantine mine site. Photo: Peter Mather

The drill rig looks tiny, insignificant: a small yellow machine on a makeshift wood platform clinging to a near-vertical rock face in the northern part of the Alaskan panhandle. The structure, however, is far from inconsequential. It represents development that could threaten the world’s largest congregation of Bald Eagles, which gather less than two miles away in the Chilkat River Watershed.

Each fall as many as 4,000 of the magnificent raptors flock to the Alaska Chilkat Bald Eagle Preserve to feast on spawning salmon. Packed shoulder to shoulder on gravel bars, eagles screech and squabble over fish carcasses alongside gorging grizzly bears. Across river, the frosty trees are so heavy with the birds’ hunched shapes that it looks like a bumper crop of huge dark fruit.

The almost 20,000-hectare preserve, which Audubon Alaska was instrumental in establishing in 1982, has effectively protected the terrain since it was created more than three decades ago. But it doesn’t safeguard the water. Upriver, Constantine Metal Resources has been exploring a massive sulfide deposit for copper, zinc, gold, and silver. The junior mining company, with $22 million in backing from Japan’s Dowa Metals and Mining, is expected to move from the exploration work it’s undertaken on the Palmer Project since 2008 to full-scale mine development if it finds sufficient reserves of the elements. Many worry that the mine could leach heavy metals and sulfuric acid—the same corrosive liquid found in car batteries—into this salmon-rich watershed, profoundly affecting the eagles, bears, and people who depend on it.

Those concerns prompted a tribe and two environmental groups to file a lawsuit earlier this month in an attempt to stop the project in its tracks. The groups allege that when granting exploration permits, the Bureau of Land Management failed to consider the cumulative impacts of future development on the culturally important salmon habitat and the massive concentration of Bald Eagles. 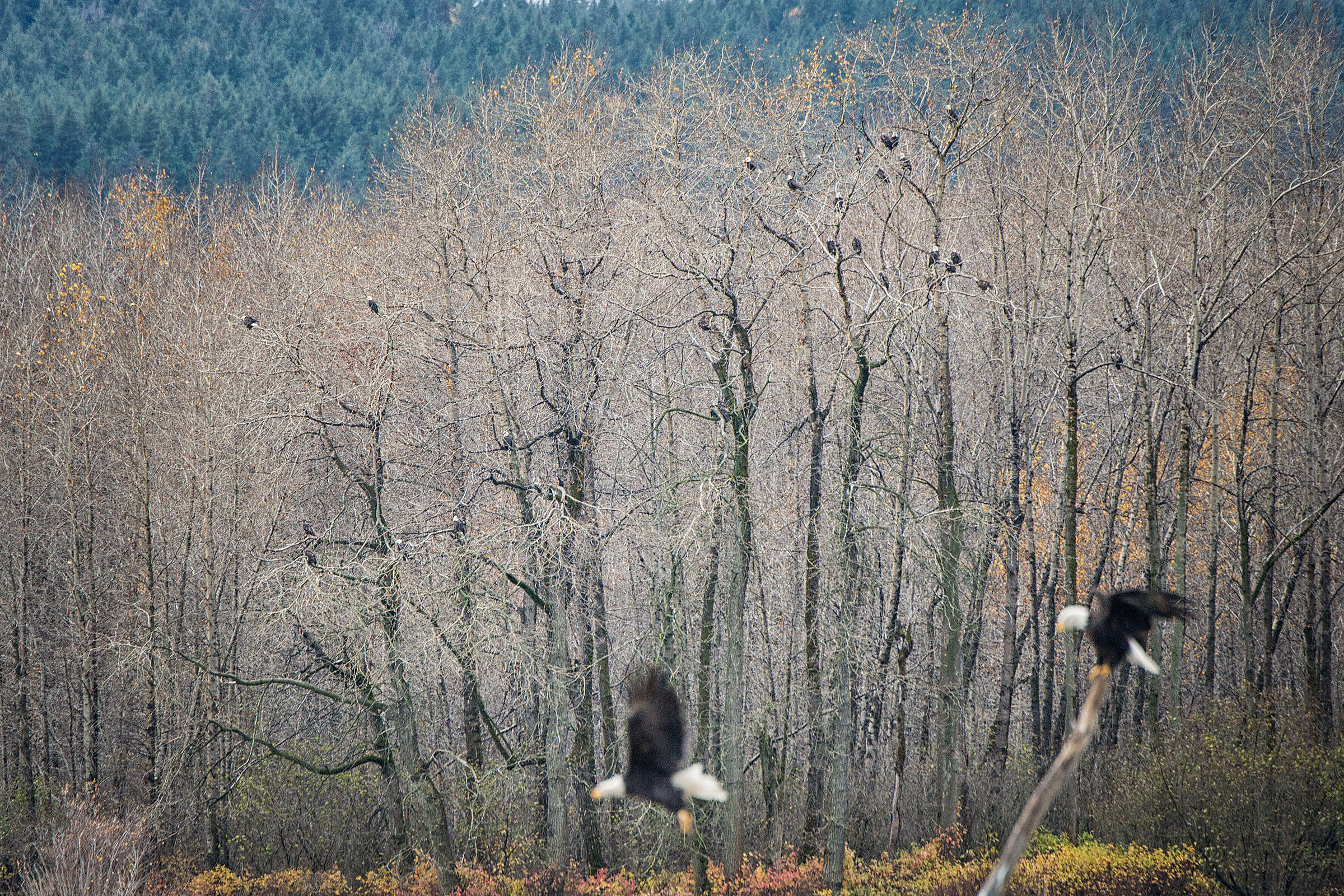 Lani Hotch, a Tlingit elder who wears eagle beadwork on her headdress, lives in the village of Klukwan on the Chilkat, just downstream of Constantine’s potential mine. Her tribal government, alongside Southeast Alaska Conservation Council, Lynn Canal Conservation, and Rivers Without Borders, filed the lawsuit. “Living here we are always surrounded by eagles, they are our closest neighbors,” she says. “We’ve been feeding on the same salmon and living in the same valley for more than 2,000 years.”

“Our subsistence way of life, our tourism, our fishing industry, our wild salmon stocks have sustained Alaska—to jeopardize all this for a mine that’s here today, gone tomorrow,” Hotch continues. “Our people will fight it.”

Guy Archibald, an analytical chemist who previously worked in mining and is now science director for the Southeast Alaska Conservation Council, was hard pressed to name a mine in a sulfide deposit that hasn’t affected water quality. The Greens Creek Mine in southeast Alaska, for example, has “extensively contaminated” Hawk Inlet, he says. Heavy metals and toxins from the operating silver mine have been found in invertebrates, shellfish, crabs, clams, and in a dead seal revealed to have 222-parts-per-million of mercury in its blubber. “Building this massive sulfide acid generating mine above one of the most unique, productive estuaries left in North America,” he says, “it’s the wrong mine, in the wrong place.”

The Chilkat is home to all five species of Pacific salmon. Every fall, they fight their way upstream to spawn in the rivers and creeks where they hatched, relying on smell to find their way back to the natal waterway they last saw as tiny fry. Exposure to even minute amounts of toxins and heavy metals can damage salmon’s olfactory organs, making it impossible for the fish to find their spawning grounds or sense danger, as well as causing skeletal deformations, multigenerational birth defects, and contaminating the food supply. “My gravest concern is not catastrophic mine failure,” Archibald says. “It’s death by a thousand cuts,” meaning that salmon will slowly just disappear. 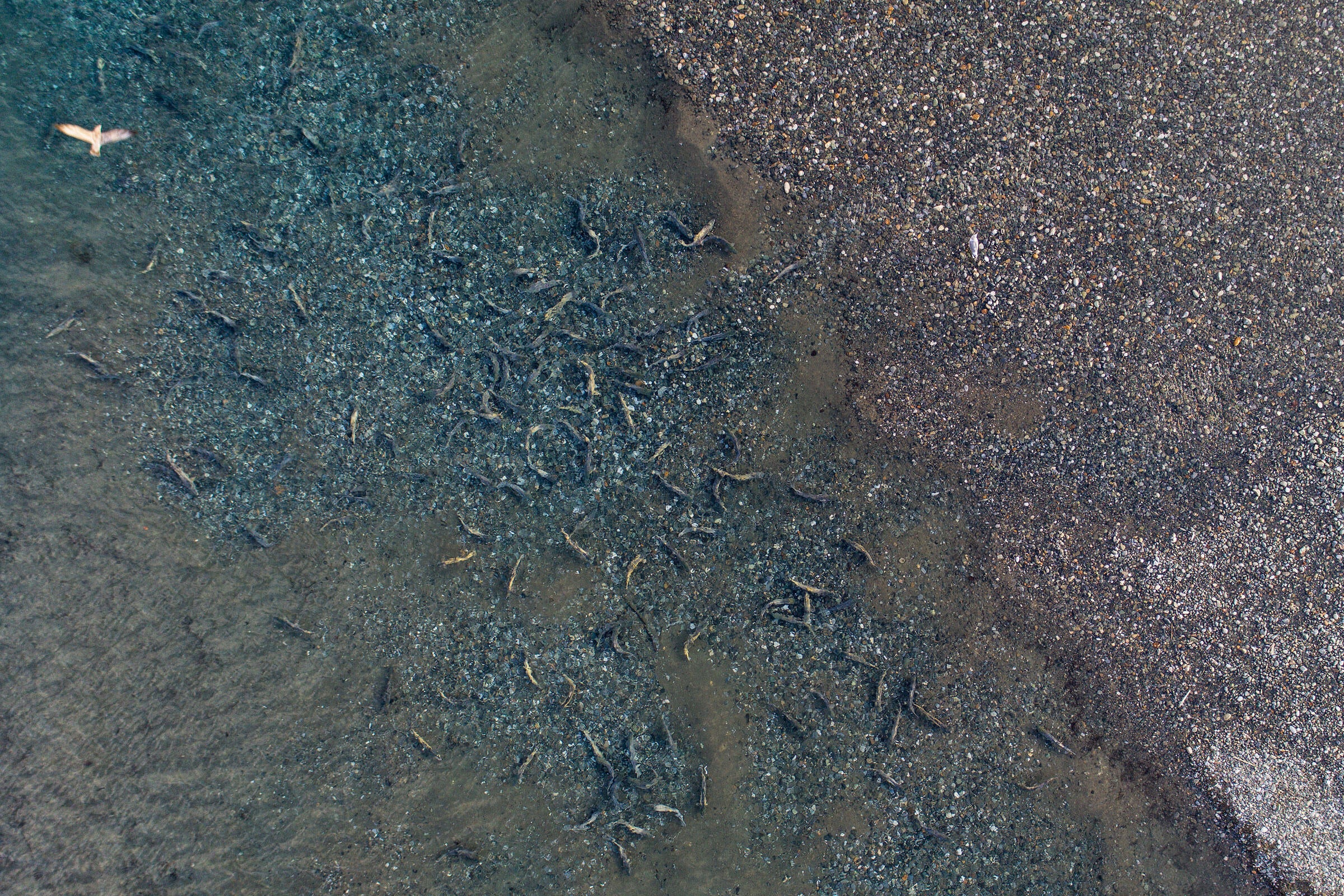 A gull flies above hundreds of spawning chum salmon on a slough of the Chilkat River, just below the Tlingit village of Klukwan. Photo: Peter Mather

Satellite telemetry work has revealed that eagles from as far away as California and Oregon fly to Alaska to feed on the bountiful fish. Salmon don’t just support eagles and grizzlies. They help to feed trees, which draw nutrients from decomposing fish carcasses that bears deposit in the forest. They sustain Hotch and other Klukwan inhabitants, attract tourists drawn to the charismatic mega fauna that consume them, and are vital to Haines’ $11.5-million commercial fishery, the town’s leading income source. Without the salmon, the economy and ecosystem would suffer.

The lawsuit could take a year or more to resolve. Meanwhile the BLM continues to grant Constantine exploration permits, further advancing the project. And once Constantine proves it has an economically viable claim, says Lynn Canal Conservation board president Eric Holle, the agency loses its right to stop the mine.

The lawsuit isn’t the only way to possibly protect the river, says Hotch. Designating the Chilkat a Tier Three outstanding national resource water under the Clean Water Act would provide the highest level of protection under federal law. The classification would require that the river be preserved in its current condition, thus banning any discharges that threaten water quality or endanger fish. 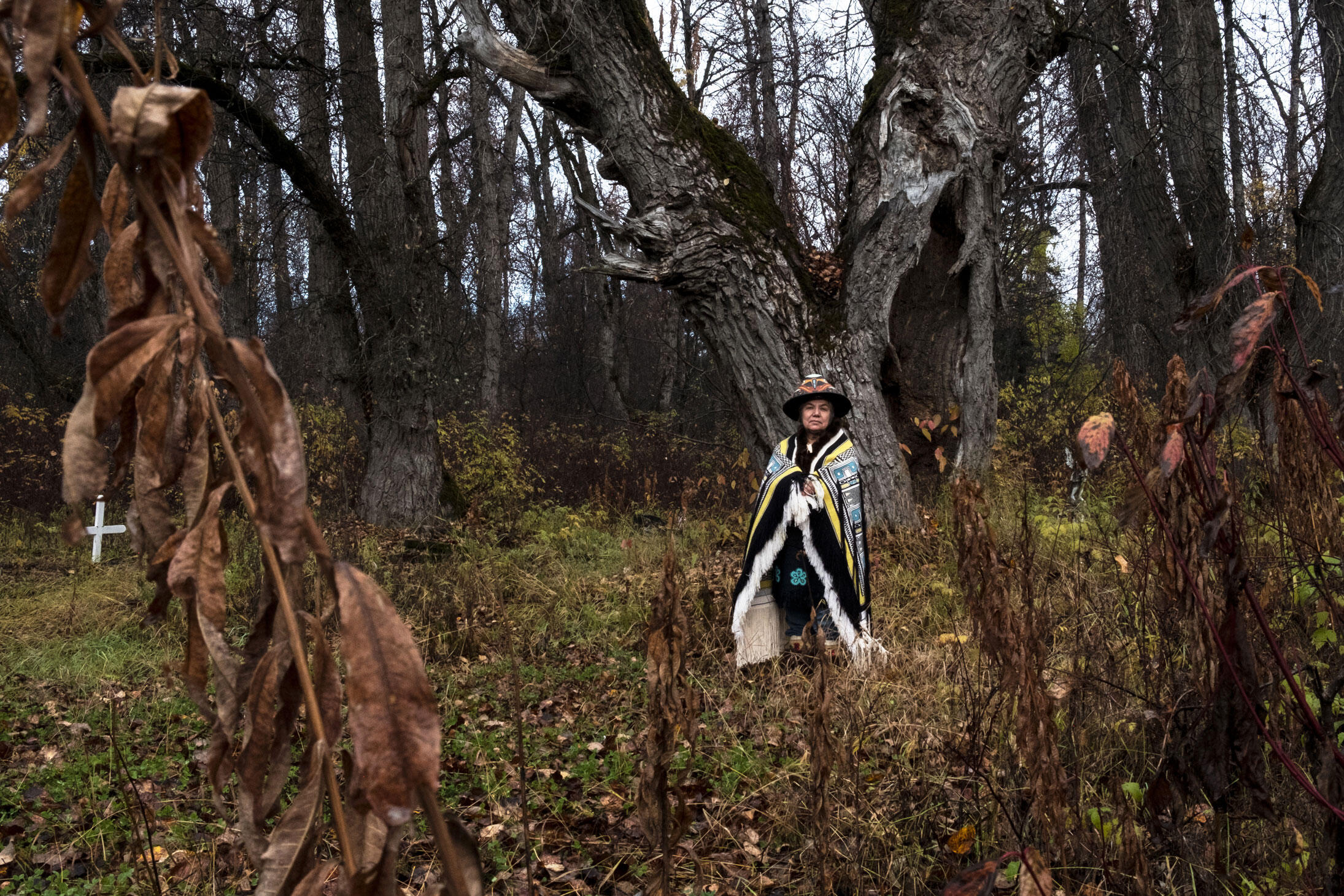 Tlingit elder Lani Hotch dressed in her traditional regalia at her home in the forest surrounding the village of Klukwan on the banks of the Chilkat River. Photo: Peter Mather

Yet Alaska currently has no procedure in place for nominating and designating rivers as Tier Three, despite being court ordered to adopt the federal Clean Water Act in 2010. And given the current political climate, with the Trump Administration slowing actions against polluters, it’s unlikely the federal government will push Alaska to enforce these environmental regulations anytime soon.

“Alaska is dragging its feet on creating a Tier Three process,” Archibald says. And if a mine begins operating before the Chilkat gains Tier Three status, its wastewater permits will be grandfathered. “The situation is critical.”

When contacted for this story, Constantine community and external affairs vice president Liz Cornejo refused to discuss future mine plans, saying it would be speculation. The company wants to be “protective of the natural environment during operation,” she says, “and in future in a mine closure situation.”

Not everyone is worried about the mine posing a risk to eagles. “They’re not a large conservation concern,” says Chris Krenz, wildlife science coordinator for Alaska’s Department of Fish and Game. “If you want to go see 100 bald eagles, you go to the dump.” The department isn’t concerned about potential acid leach mine drainage, either. “Given the technological advancements and everything industry knows now,” says Jackie Timothy, the agency’s regional supervisor, “it’s reasonable to assume nothing will change on the Chilkat.”

Federal Fish and Wildlife Service raptor specialist Steve Lewis isn’t so optimistic. “We are always told it will be fine, don’t worry, they have the technology figured out,” he says. “Then it isn’t fine and we end up with a huge toxic mess and no one to clean it up.”

Gershon Cohen has worked extensively on industrial-scale pollution issues and is project director of the non-profit Alaska Clean Water Advocacy, which has been working with other stakeholders to build support for long-term protections of the Chilkat. He is especially troubled by the threat of earthquakes. “We are talking about building a mine in a rainforest, in one of the most seismically active places on the planet,” he says. Haines is drenched with an average 49 inches of rain and 170 inches of snow annually, and it experienced more than 130 earthquakes in the past year, including a massive 6.3-magnitude tremor. Whether the mine dry stacks its waste rock or builds an earthen tailings dam, says Cohen, it will produce millions of gallons of polluted wastewater every year—a toxic brew that  seismic activity could spill into the environment. “Its tailings impoundments will leak, if not catastrophically fail.” 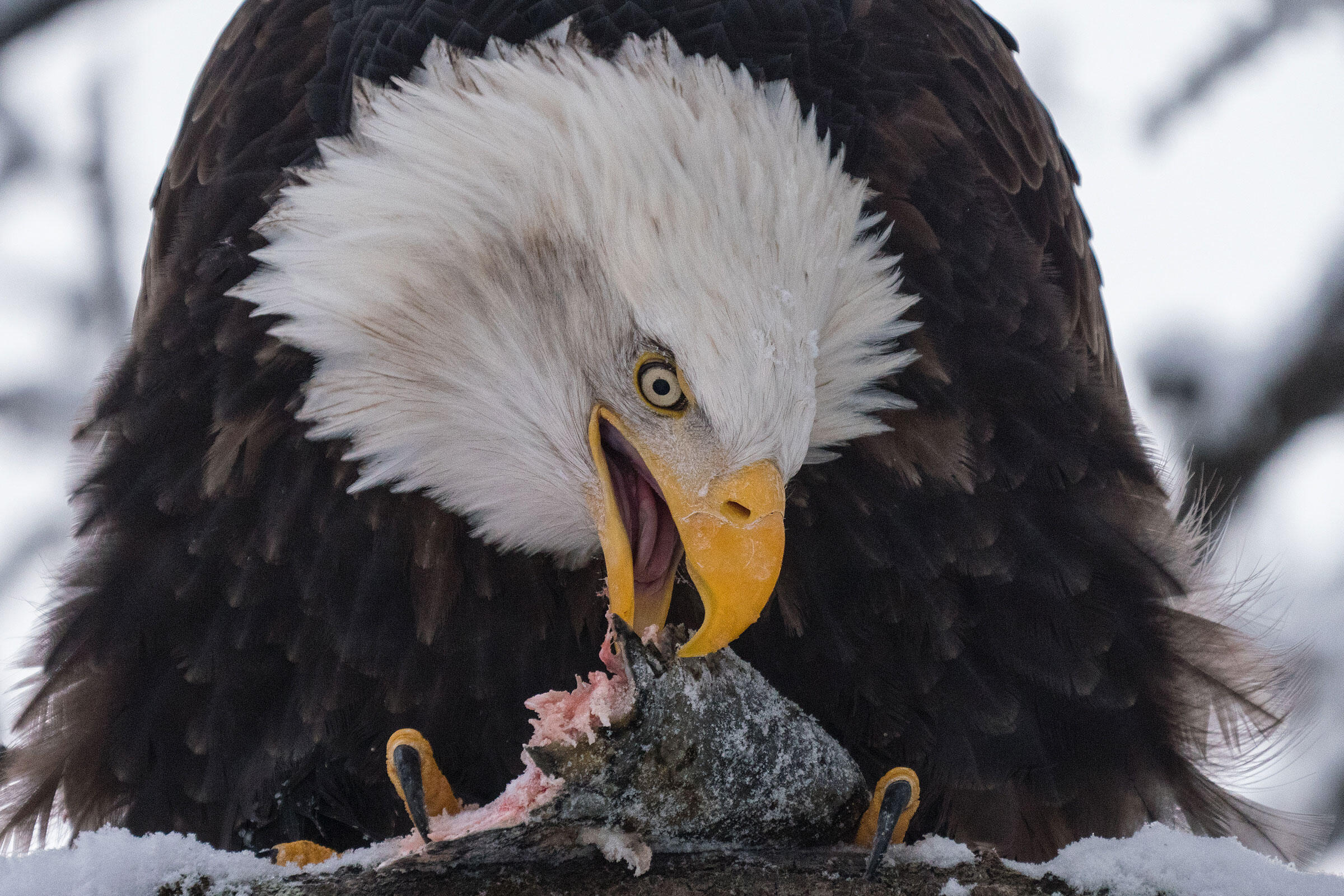 Nils Warnock, executive director of Audubon Alaska, agrees that the risk is too great. “Putting a mine at the headwaters of this globally important conservation area for Bald Eagles—it’s clearly incorrect to say its safe,” he says. “I mean look at Mount Polley.”

In 2014, a tailings dam breach at the copper and gold mine in British Columbia dumped nearly seven billion gallons toxic waste into the surrounding watershed, which is inhabited by trout and spawning Coho salmon, and is a migration route for more than one million sockeye salmon. After the disaster, fish floated belly up in affected waterways, and authorities warned residents not to drink water from those sources.

Mount Polley is one of 40 mining waste failures in the past decade highlighted in a report released by the United Nations Environment Programme in November. These incidents have killed some 341 people since 2008, according to the report, damaged hundreds of miles of waterways, and jeopardized the livelihoods of dozens of communities. 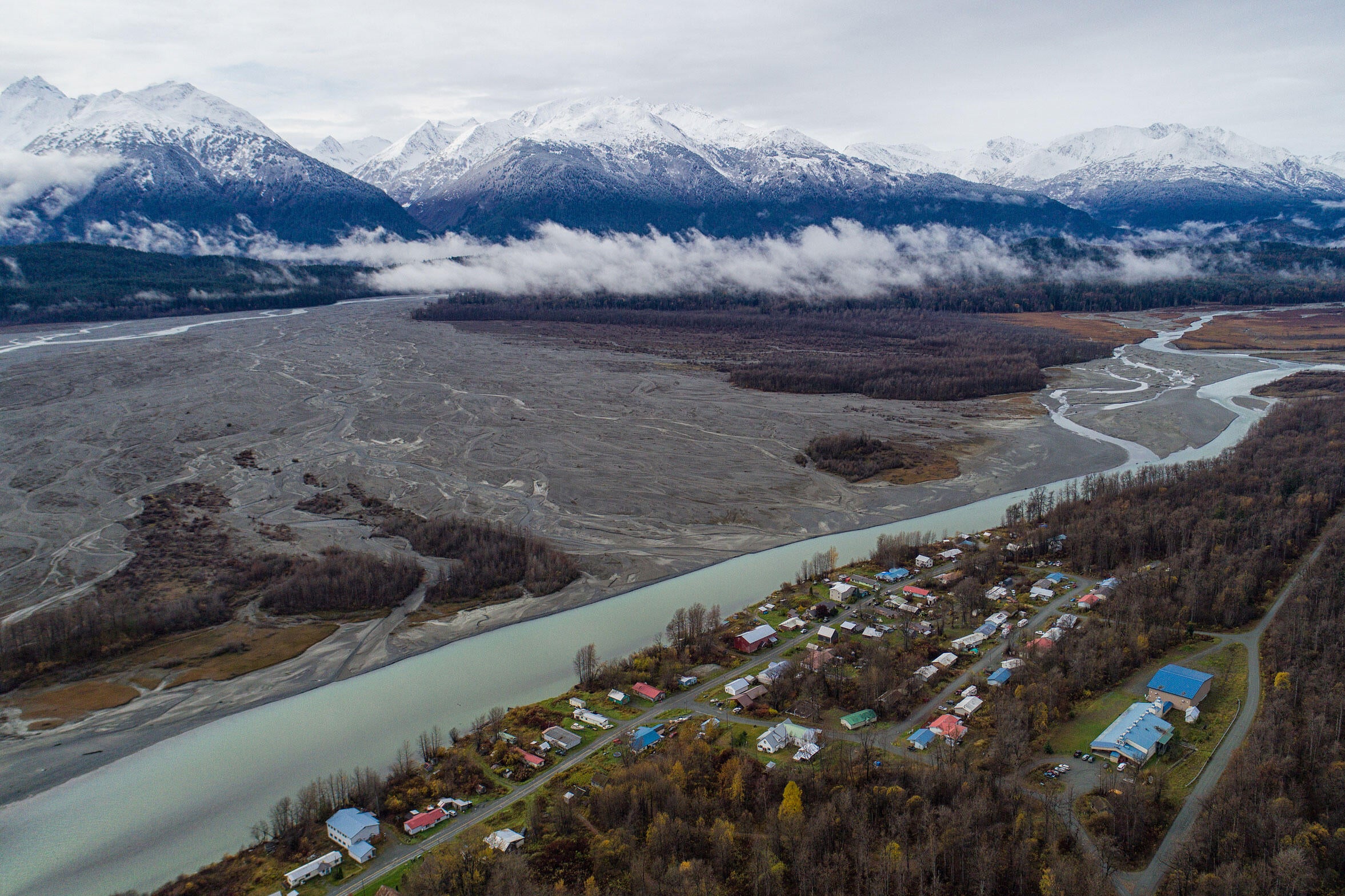 The Chilkat village of Klukwan on the banks of the Chilkat River. The village is located about 10 miles below the proposed Constantine mine site. Photo: Peter Mather

People come to Haines because it’s a place that’s “unscarred,” says Joe Ordonez. The Rainbow Glacier Adventures owner runs rafting tours down the Chilkat, paddling clients who travel from as far away as China, India, and New Zealand. “It’s one of the world’s great wildlife spectacles; you stand in one spot and can count hundreds of eagles.” Recently, Ordonez guided a man from Flint, Michigan, who couldn’t drink the water in his hometown because of lead contamination. Ordonez can’t imagine something similar happening in this pristine area.

Constantine’s promise of jobs and its investment in contractors and suppliers in Haines has formed a rift in the tightknit community, with even the local Chamber of Commerce refusing to take sides. JR Churchill, who’s worked as a commercial fisherman here for the past 40 years, is no longer on speaking terms with some longtime friends who support the mine. “My concern is if just one thing goes wrong at that mine,” he says. “It takes very little to make the balance of a watershed inhospitable to salmon. One spill into the river, one disaster, and we lose everything.”