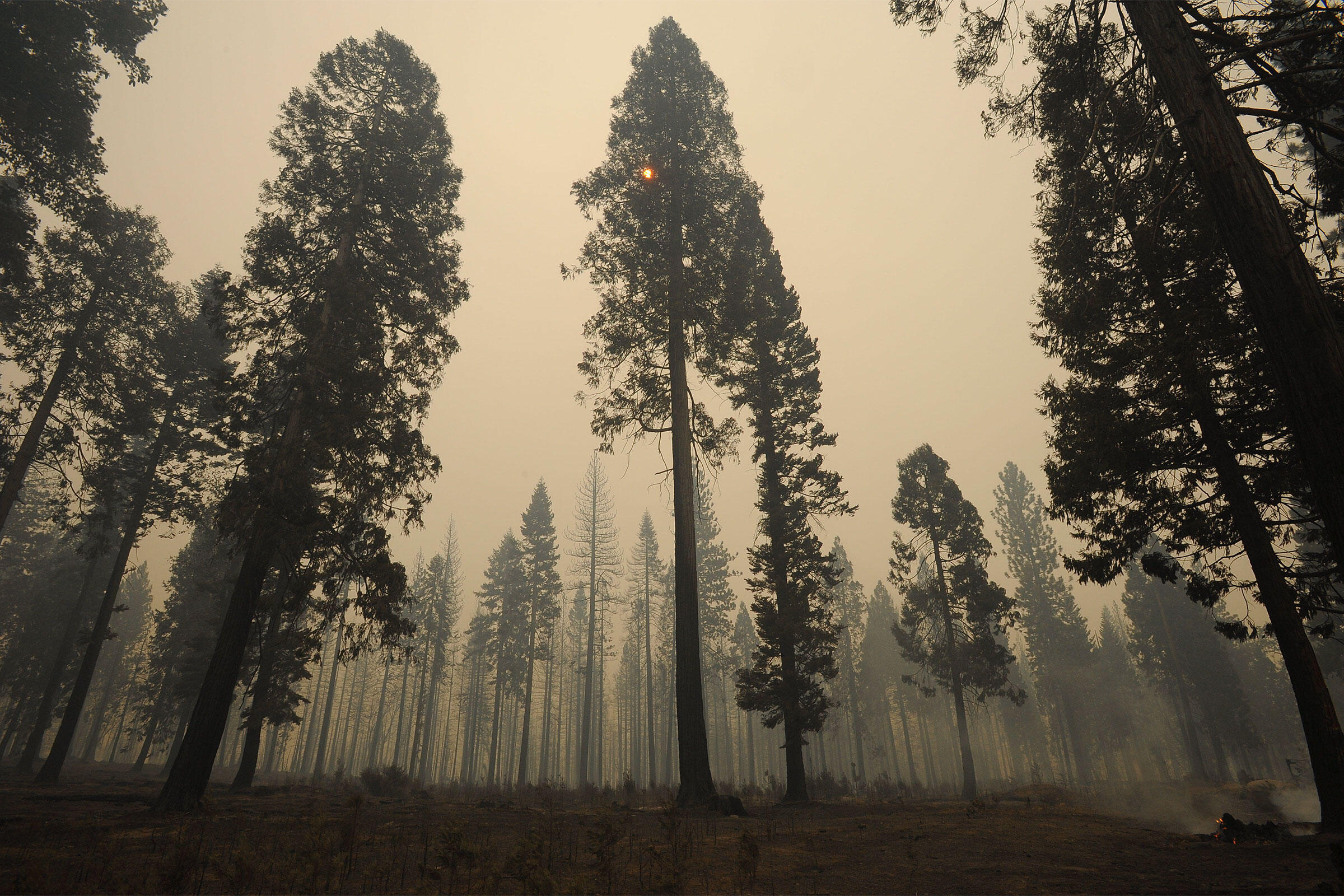 In 2014, the King Fire tore through more than 97,000 acres in El Dorado County, California. More than 50 percent of the fire area—48,526 acres—burned severely; there, more than 90 percent of trees died. Large, high-intensity wildfires fires that destroy landscapes this way are known as "megafires." Photo: Krysten Kellum/Zuma Press/Alamy

Many birds, such as owls and woodpeckers, thrive in forest habitats created after fire. But the hotter, bigger, more destructive megafires out West might be too much even for them.

In 2014 Gavin Jones was studying how changing weather conditions impact the California Spotted Owl when something “gut-wrenching” happened. The King Fire, a high-intensity megafire in California’s Sierra Nevada, ripped through more than half of the owl study area, threatening decades of research. Scientists had monitored the owl population there since 1993.

“At the time we were all devastated,” says Jones, then a graduate student at the University of Wisconsin. Climate change, temperature variations, and drought were all components of his work, but not fire. He recalls thinking, “My research doesn't mean anything anymore.”

“Then we realized, ‘Wait a second. There is a lot of uncertainty of how Spotted Owls respond to fires,’ ” he says. “This is actually an opportunity to learn.”

The burned landscape following the King Fire became an apt laboratory to examine an understudied topic: After the smoke clears following especially destructive infernos called megafires, do birds return? “This gave us a window into what might occur in the future if more fires are like the King Fire, which they are predicted to be,” says Jones, now an ecologist at the U.S. Forest Service (USFS) Rocky Mountain Research Station.

That future is already here. This season, more than 70 major wildfires in 11 states have burned 3.7 million acres as far east as South Dakota. Evacuation orders remain in place for nearly 25 of those fires, and 30,000 firefighting personnel are working the blazes, according to the National Interagency Fire Center.

Wildfires are part of natural regeneration cycles in forests. They sweep through, clearing out overgrowth. Wildflowers, ferns, and other plants regerminate, surviving trees resprout leaves, and soon wildlife, including birds, return. But for decades people have suppressed these smaller wildfires in western forests and let dead trees and other tinder accumulate, upping the chances that a wildfire will burn big, hot, and long. Combine that with the ever-drying climate and a housing boom in forested lowlands and you get ideal conditions for megafires. Seventeen of the 20 largest and 16 of the 20 most destructive fires in California history have occurred since 2003, according to CalFire.

Researchers see troubling signs for birds in scorched areas where fires are so intense they leave behind a barren, homogenous landscape.

Not every megafire looks alike: A megafire in the seasonally dry and alpine Sierra Nevada is different from one in the wetter Pacific Northwest, which is different from a megafire in the arid Mojave Desert. Still, no matter the geography, researchers see troubling signs for birds in scorched areas where fires are so intense they destroy not only the understory, but also fell wide swaths of trees, leaving behind a barren, homogenous landscape. This could be true even for the California Spotted Owl and Black-backed Woodpecker known to readily recolonize burned forest. According to recent research, these species need pyrodiversity—a patchwork of forest types, varying in burn intensity and plant regeneration, that develops after wildfire.

“We need a mosaic of conditions of green, unburned, and burned to maintain the entire suite of birds associated with conifer forests of North America,” says Victoria Saab, a wildlife biologist at the USFS Rocky Mountain Research Station. “If you don’t get a mosaic—if you don’t get patches of green—I would be concerned.”

In a 2016 paper, UCLA ornithologist Morgan Tingley concluded that “pyrodiversity increases biodiversity.” Between 2009 and 2014 he led bird surveys across 465,000 acres of burned conifer forest in California’s Sierra Nevada and Southern Cascade mountains. The data showed that in the decade following wildfire, areas that experienced different burn severities developed into unique habitats, each with its own bird community.

But megafires like the King Fire have disrupted this historical cycle. Their relentless intensity often leaves less pyrodiversity. Instead they create larger areas of sheer destruction.

After the King Fire, Jones returned to his research site to see how California Spotted Owls responded to the devastation. The massive fire swept through more than 97,000 acres, which included 44 percent of the study area and 30 of the owl’s 45 known nesting sites within it. Jones tracked the owls, which had already been outfitted with GPS receivers and colored leg bands, and found that a year later the birds had abandoned the most severely burned areas where more than 75 percent of trees died. These severely burned areas represented 50 percent of the fire’s total burn area.

It’s not that California Spotted Owls avoid all severely burned areas after fire—just the largest patches. They rarely venture more than 325 feet deep into a severe burn, Jones found in follow-up research at the King Fire site. But do they recolonize smaller patches that burned severely? To find out, he also studied owls in three western national parks in the Sierra Nevada where forest managers intentionally set small fires, and let natural ones burn, to maintain healthy, historical wildfire regimes. He saw that the California Spotted Owl returned to smaller patches even if they burned intensely, while avoiding larger ones—maybe because wide expanses with fewer trees are home to less prey or offer less cover from predators, such as the Great Horned Owl. “To us, that suggests again there’s this adaptive response,” Jones says. “Owls are adapted to frequent, low-severity fires,” not intense megafires.

Even the Black-backed Woodpecker, long-considered a bird that thrives after intense fires, apparently has its limits.

Even the Black-backed Woodpecker, long-considered a bird that thrives after intense fires, apparently has its limits. The woodpecker flocks to burned-out forests to feast on beetle larvae that infest dying and dead trees. However, Andrew Stillman, an avian ecologist at the University of Connecticut and Tingley’s student, made a surprising discovery when he attached radio transmitters to adult and juvenile birds over the course of seven years.

As expected, adult woodpeckers primarily kept to severely burned areas. “But the juveniles were a different story,” Stillman says. “Right after leaving the nest, these young birds flew to areas with live trees remaining after fire.” He suspects they preferred these areas because the living trees provide protection from predators. This species, too, needs pyrodiversity.

“Our conventional thinking was that more severe fires might be good for certain species that thrive in burned forests,” Stillman says. “But our research shows that even fire-loving species need variation in burn severity to survive.”

If there are any avian winners of these devastating fires, they might be hummingbirds, because wildflowers flourish where there are fewer trees to shade out sunlight. Broad-tailed, Rufous, and Calliope Hummingbirds are among those found to respond positively following fires in the western United States, according to research by Deborah Finch of the Rocky Mountain Research Station. However, she cautions that research on these species so well-loved by backyard birders is extremely limited.

“This is an area that needs more investigation, particularly to what extent will [megafires] have a negative effect on hummingbird species,” Finch says. “If it gets to be a huge megafire, does it go from a negative to a positive effect?”

These massive fires aren’t inevitable. Climate change, which dries out forests and makes them more flammable, can be addressed through government policies to reduce carbon emissions. To address tinder build-up, forest managers can intentionally set smaller fires to return to healthy fire regimes. But it could take decades to get back on track: So much fuel has built up that California needs to burn 20 million acres of forest to catch up, according to one estimate. It would help birds, too. “Conservation and management in the era of megafires is going to be complex,” Jones says. “It’s more important than ever that our research is relevant for on-the-ground management.”

Welcome to the new era of "megafires," which rage with such intensity that no human force can put them out. Their main causes, climate change and fire suppression, are fueling a heated debate about how to stop them.

In just a decade, three quarters of birds vanished after drought, heat stress, and beetles killed millions of piñon trees in the southwest.