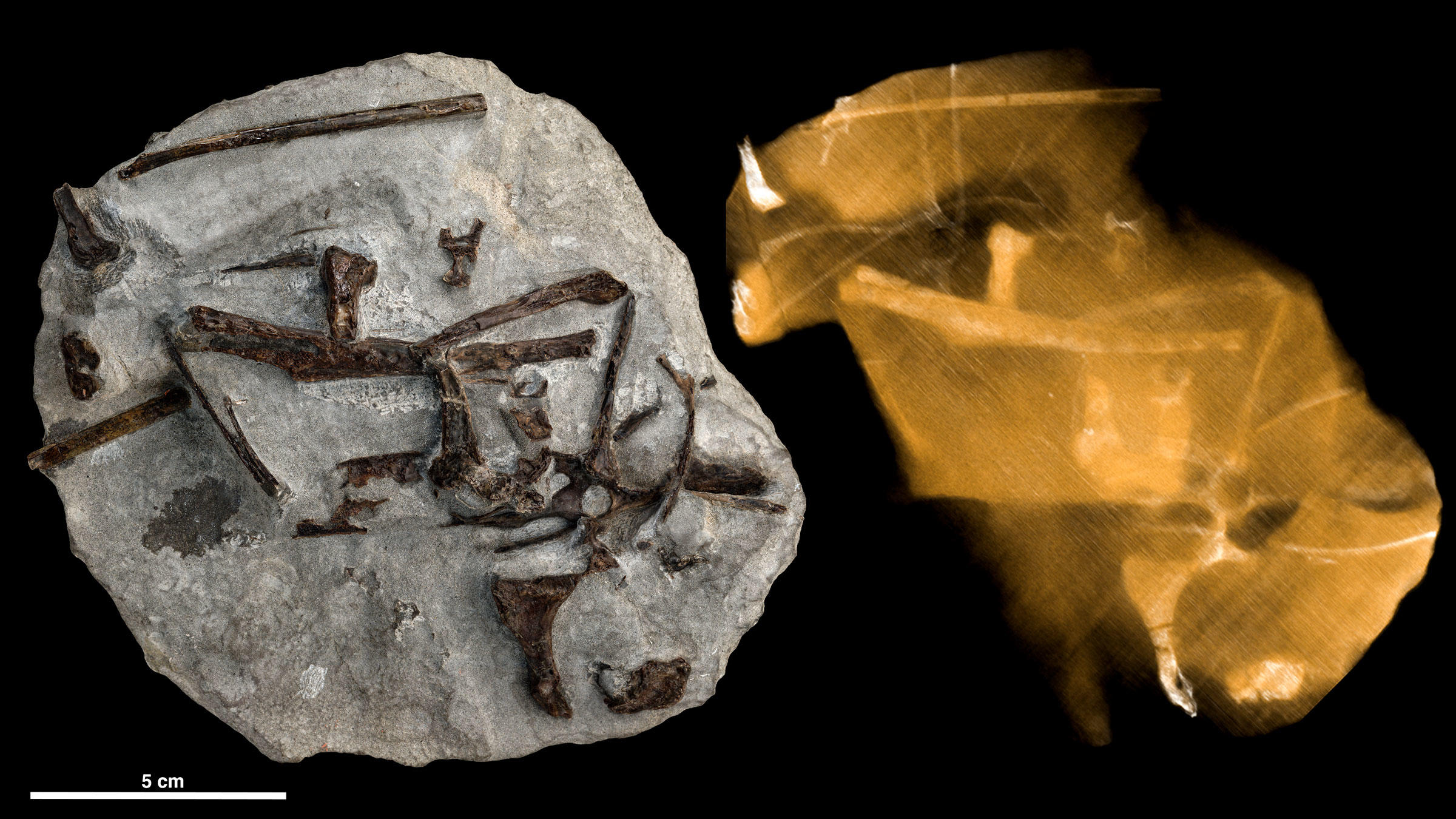 From left: One half of the rock concretion that bears the original skeleton of the duck-like Cretaceous bird Vegavis iaai; A computed tomographic image of the same specimen. Photo: J. Clarke for Clarke et al

Extreme fossil hunting on the icy outcrops at the bottom of the world.

The words “fossil hunting” usually bring the same image to mind: A group of intrepid, sunburnt scientists, trodding through remote deserts and dusting off dinosaur bones. Most of the time, that’s pretty accurate—but in Antarctica, it’s a totally different story. Experts in the desert might experience the rare, passing storm, but as University of Texas at Austin paleontologist Julia Clarke and her team recently discovered, frequent snowstorms that blanket the ground for days can make expeditions in the Antarctic especially challenging. These conditions not only make it hard to just travel, but taking notes or collecting a delicate set of fossils is next to impossible.

As grueling as it all sounds, this is what many paleontologists consider a dream job: to excavate a remote, frozen boneyard as part of the Antarctic Peninsula Paleontology Project. Since 2009, the project has taken teams of multidisciplinary researchers to the frost- and wind-bitten outcrops of Antarctica to dig up everything from fossil crabs to post-Cretaceous mammals. But the birds have always been one of the most tantalizing draws to the expeditions. In 2005, for instance, Clarke and her collaborators named a new species, Vegavis iaai, from a beautiful skeleton found on Antarctica’s Vega Island. This 68- to 66-million-year-old avian turned out to be a close relative of today’s ducks and geese, hinting that many modern groups of birds made their debuts while the Earth was still dominated by their relatives, such as Tyrannosaurus.

The latest expedition, which took place from February to March this year, turned up more discoveries along the avian fossil trail. Each was hard won. For Matthew Lamanna, a Carnegie Museum of Natural History paleontologist participating in the project, the dig was the hardest of his life. “I’ve looked for fossils in a number of places around the world,” from Patagonia to the Australian Outback, Lamanna says. “If digging through rock can be difficult, digging through frozen rock can be really difficult.”

The challenge of getting to Antarctica—not to mention working there—has kept the region's history largely unexplored. But now that Clarke, Lamanna, and their team are digging through the frigid permafrost and rock, the story of Antartica's ancient life is starting to come into focus, including the possibility that the now-frozen polar cap was once a critical place for bird evolution.

The challenge of getting to Antarctica—not to mention working there—has kept the region's history largely unexplored.

In the heyday of the dinosaurs, between 100 and 66 million years ago, Antarctica was a very different place. The continent was warm and bursting with vegetation, home to non-avian dinosaurs as well as early birds. While the majority of the newly collected specimens are isolated pieces of bone, many appear to come from prehistoric birds that could help document the major radiation of avian lineages.

But the fieldwork is not for the timid. First, there’s a lot of gear to lug around: rock hammers, GPS units, thermal underwear, Gore-Tex jackets, and tents on loan from the U.S. Antarctic Program. The equipment has to be packed, readied, and transported to the Antarctica Peninsula, crossing the rough seas of the Drake Passage before arriving at the research areas.

Finding the fossils also requires covering a lot of ground. Over three expeditions to Antarctica, the team has searched the South Shetland Islands, the Naze Peninsula, Vega Island, and more, with the latest search focused on the area around James Ross Island. The most recent voyage took four years of planning, with endless phone calls between researchers, the National Science Foundation, support contractors, and others.

For the group, the rewards are more than worth the huge effort. Each scrap of skeleton widens the view to prehistoric Antarctica a little more. “Next to nothing is known about the land-living, backboned animals that inhabited Antarctica during the Mesozoic Era, or Age of Dinosaurs,” Lamanna says. That means every fragment and bone adds a new element to the story of what life on the continent was like before the mass extinction 66 million years ago. “We have great fossils from this year and 2011,” Clarke says. These finds are being closely safeguarded until they’re officially published, but both Clarke and Lamanna are promising some “exciting” conclusions.

One possible outcome is that scientists will finally be able to pin down where and when modern avians got their start. While cautious about this idea, Lamanna notes that the presence of Vegavis and other new finds on the polar shelf might indicate that they first evolved in the southern hemisphere before spreading their wings to conquer new lands. “Could all of the thousands of modern bird species trace their ancestry to Antarctica, a continent that today is a frozen popsicle at the bottom of the planet?” Lamanna says. The most recent fossils from James Ross Island may soon help answer that question.