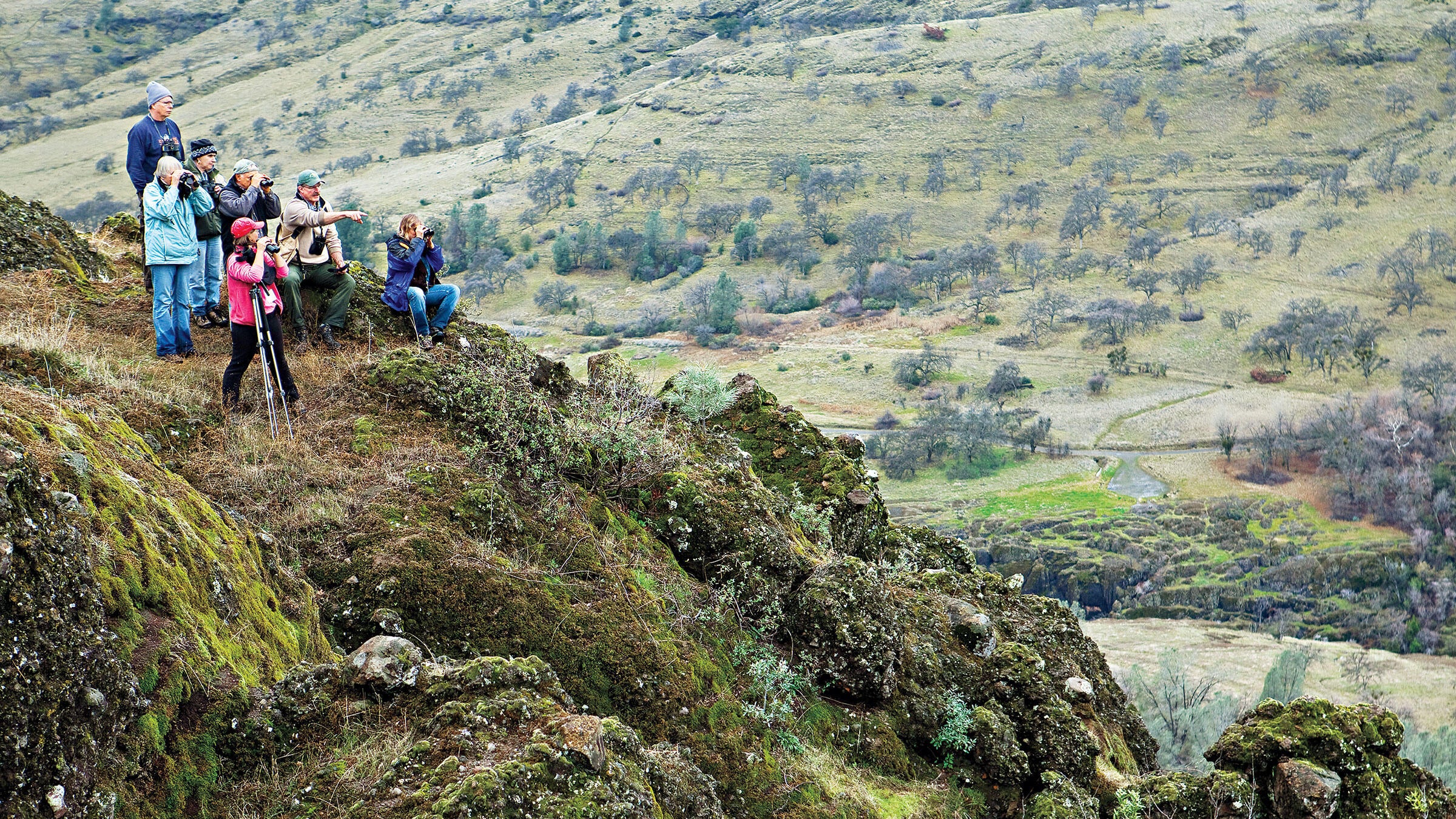 Keep your eyes on the prize, in addition to other things, to avoid disasters out in the field.

On the spectrum of risky activities, birdwatching ranks much closer to, say, playing Scrabble than it does to bull riding. But safety guidelines should still be followed while on the lookout for feathered friends. Here are some expert tips for staying out of harm’s way.

Like the birds they follow, birdwatchers often move around in small flocks, which offer safety in numbers, companionship, and extra eyes for spotting wildlife. But setting out solo is also common. At the very least, know your route and tell someone where you’ll be, says Alice Deutsch, a former president of the Linnaean Society of New York. Some experts also recommend carrying a whistle. “When I do venture out by myself, there are certain areas I won’t go,” Deutsch says. “I don’t want to have to feel uncomfortable.” Meanwhile, when abroad, Deutsch travels only with groups. “You always stay with the leader; you don’t wander off by yourself,” she says. According to her, sticking to the pack has its benefits because “that’s how you see the birds.”

Urban green spaces and designated hunting areas can be excellent for birding. Although nature lovers may bristle at some of the activities taking place there, Deutsch warns against playing superhero. “You don’t get into confrontations with anybody,” she says, adding that “people are pretty friendly if they see you with binoculars.” In fact, an alleged drug dealer in her beloved Central Park in New York City once helped her locate a rare species.

Dumps and sewage pits can also yield exotic species. In Kingbird Highway, Kenn Kaufman tells of adding Mexican Crows to his Big Year list by visiting a landfill. But be sure to check on the regulations for entering such sites—many contain hazardous materials and are off-limits to the public. When applicable, signage about trespassing and fines will be posted near the entrances.

3. Be aware of potentially perilous wildlife.

Kevin J. McGowan, an ornithologist at the Cornell Lab of Ornithology, says that “there are damn few animals” in North America he’s afraid of other than humans. Nonetheless, he tucks his pants into his socks in places where ticks are numerous, and at times he wears a head net to ward off black flies and mosquitoes, explaining that it can be the “difference between finding a new bird and running away screaming.” Many birders use DEET-based insect repellent. Those who prefer a more natural alternative can use plant-based repellents, which generally contain lemon and eucalyptus oil. As for larger animals, like cougars and moose, it’s wise to be cautious in areas where they live. Carry bear spray—a more potent form of pepper spray—and don’t leave food out in the open. McGowan says he pays particular attention to where he’s putting his hands in rattlesnake country.

Cell phones have revolutionized society, and birdwatching is no exception. Dorian Anderson, who just completed a Big Year entirely by bicycle, spotting more than 600 U.S. species on his 17,830-mile ride, says that his phone served as a digital field guide, rare bird alert, and navigation tool, and that he also used it for keeping connected with the wider world. “My phone was my lifeline,” Anderson says. “I could not imagine doing what I did without it.” Though Anderson never faced a true emergency during his Big Year, he knows of a fellow birder who once slipped on a jetty and became trapped in the rocks. Luckily, he was able to dial 911 and was rescued before being engulfed by the rising tide.

Unless you’re on a multi-day birding excursion into the wilderness, food and water will not make the difference between life and death. Yet failing to bring them can cut short an outing or at least make it miserable. “I don’t want to have to leave someplace where the birds are getting good just because I’m starving,” says McGowan, who carries hiking snacks such as trail mix. To limit the number of restroom visits, he also recommends drinking espresso instead of a full cup of coffee.

6. Keep valuables out of sight.

Thieves do target some trailheads, even in out-of-the-way areas, so experts advise locking car doors and keeping binoculars, scopes, cameras, and other expensive items in the trunk (not on the backseat). It likewise pays to be wary when taking the gear with you. “Sometimes, I don’t take my binoculars out in the subway,” Deutsch says. “I like to maintain a low profile.”

With so much activity in the trees, birdwatchers can easily lose track of their immediate surroundings—and then make a wrong move. “People get totally absorbed in it; I know I do,” McGowan says. “You’re looking up: You can bump into things, you can step in things, you can step off of things, you can trip, you can get hit by a car.” He even recalls reading a story about a birder in Africa who, so enthralled with the avian life around him, backed up into the waiting mouth of a Nile crocodile.

Maps and a compass are necessities, especially for those inclined to roam off the trail. According to Patrick Baglee, who like Deutsch is a Linnaean Society member, it’s important to take heed of all signs, such as “keep out” and “danger.”  Moreover, learn when gated parks close, he advises, and then make sure not to lose track of time. “A good bird can make time disappear without you realizing it,” he says.

Birding while operating machinery is not recommended. Pull your car over before pulling out your binoculars, and make sure to leave plenty of space between you and the road. The same concept applies to bikers. Upon spotting a bird during his Big Year, Anderson was tempted to look at it while still straddling his bike. For safety’s sake, though, he recommends parking it and taking a few additional steps away from traffic. “The number one assumption you have to make—and I don’t know how to phrase this any other way—is that everyone on the road is a complete idiot,” Anderson says. He experienced the most difficulties in car-friendly states like Texas and Florida. “It’s like you don’t even exist,” he says. “They just see right through you.”

Since birds brave the most bitter temperatures, so, too, do birdwatchers—often bundled up like Arctic explorers. “I lead trips into some fairly inhospitable areas that are surprisingly cold,” McGowan says, mentioning Niagara Falls as an example. “I tell everyone to bring one more layer than they think they’ll need. Long underwear by itself isn’t going to cut it.” Water-resistant footwear is especially imperative in winter, he says, whereas sunscreen and a hat are summer necessities. Check the weather report beforehand, but be aware that it’ll be colder and windier on the coast and the mountains than in nearby towns.