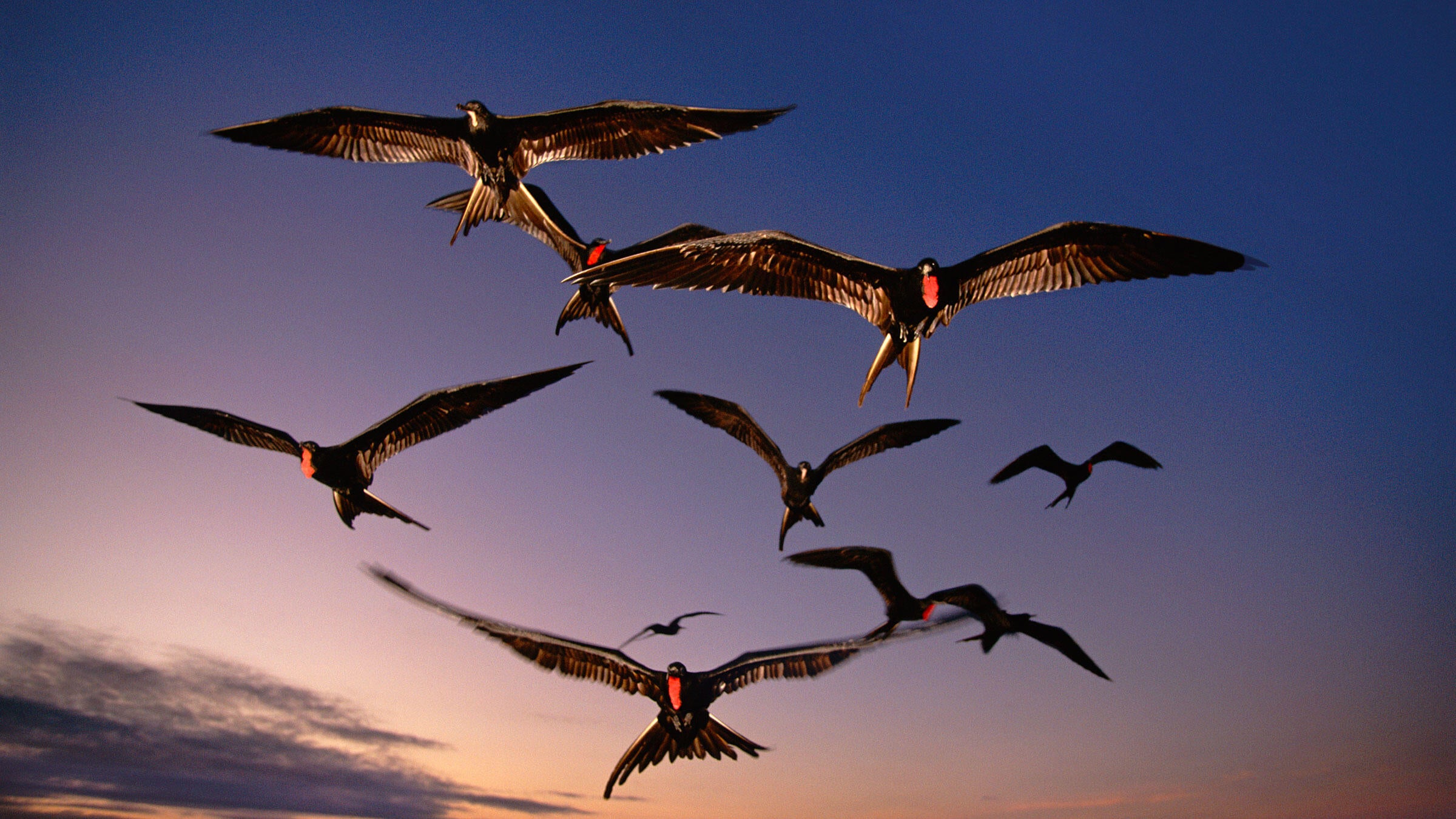 Scientists Finally Have Evidence That Frigatebirds Sleep While Flying

According to a new study, the birds can stay aloft for weeks by power napping in ten-second bursts.

A common myth once held that albatrosses could fly for years at a time, eating and drinking and mating on the wing, landing only to lay their eggs. Modern science does not support this old wives’ tale, but the verifiable truth about avian flight behavior is almost as impressive. The Gray-headed Albatross can circle the globe in only 46 days, making numerous pit stops along the way. And rather than the albatross, it’s the Alpine Swift that holds the record for the longest recorded uninterrupted flight by a bird: One logged more than 200 days in the air as it hunted flying insects on its wintering range in the skies over West Africa.

These legendary flights raise a flurry of questions about how the birds pull off such feats, and chief among them is the question of sleep. For many years, scientists conjectured that long-ranging birds could sleep while aloft, despite having no real evidence to support this claim. Until now, that is. A new study about the Great Frigatebird, published earlier this month in Nature Communications, supports the conventional wisdom—but in a surprising way.

The Great Frigatebird might not have the incredible range of the Alpine Swift, but its aerial feats are astonishing in their own right. On their wandering flights, frigatebirds can stay aloft for up to two months without touching down on land or water. More importantly, while out at sea, they couldn't even take a break even if they wanted to; unlike most other seabirds, frigatebirds can't swim, becoming waterlogged and eventually drowning if they do encounter water. It's this inability to stop and get some rest while floating that has caused scientists to suspect the bird might sleep while flying, and it's why Niels Rattenborg of Germany's Max Planck Institute for Ornithology (and other colleagues) chose to study their sleep patterns.

Rattenborg was also drawn to frigatebirds for logistical reasons. One nesting population of the species in the Galapagos Islands is “quite tame” after years of constant observation, he says. Rattenborg and his team found it relatively easy to capture 15 of the birds to implant electroencephalographs (EEGs) into their skulls. Because EEGs measure electrical activity in the brain, the researchers were able to tell when the birds were awake or asleep. An implanted accelerometer clued them into how fast and in what direction the animals flew.

When they downloaded the data from the tiny devices a week later, the researchers found that while frigatebirds do sleep while flying, they sleep very little—about 45 minutes each day in short ten-second bursts, usually after dark. By contrast, on land, the birds sleep one minute at a time throughout the day and night for a total of roughly 12 hours each day.

While sleeping mid-flight, frigatebirds don’t go completely on autopilot; the birds often sleep with only one side of their brain, leaving the other side awake. Most animals that sleep half-brained do so to stay alert for predators, but frigatebirds have no natural predators in the sky. Rattenborg suspects that they remain half-awake to prevent mid-air collisions, though none were observed during the study.

Much like hawks or eagles, frigatebirds soar by circling thermal updrafts to gain altitude before gliding straight for long distances, slowly losing altitude until it’s time to climb again. All of the sleep recorded in the study occurred during the upwards-circling portion of the flight; the birds didn’t sleep at all while gliding down. Paper co-author Alexei Vyssotski of the University of Zürich, who designed the implantable EEG/accelerometers and performed some of the bird surgeries, says that while it may be more complex, catching a thermal updraft is also the safest part of a flight. “An animal can't collide with the water surface when the altitude rises,” he says.

The discovery that birds do in fact sleep on the wing, even if only in short, infrequent bursts, confirms a long-standing scientific theory about avian biology. It also adds to the growing literature about the necessity and nature of sleep in general, even in humans. A few years ago, Rattenborg discovered that Pectoral Sandpipers can survive and even thrive for weeks with very little sleep, and his decades-old finding about Mallard Ducks' half-brained sleeping patterns inspired research about why people sleep poorly in hotels and other unfamiliar places—because one side of our vigilant brain stays a little awake to keep watch.

Could humans also benefit from many short naps over long periods of time? Leonardo Da Vinci is alleged to have slept only 90 minutes a day, in short fifteen-minute bursts every four hours. Maybe he was onto something that frigatebirds already knew.