A montage of a cicada night-molt timelapse blended with audio from a daytime chorus. During the night, the cicadas don't sing; it is almost silent in the forest, minus the frogs, owls, and a few katydids and crickets. Audio and Video: Chris Linder

The last time they saw the light of day, George W. Bush was president, atmospheric carbon dioxide measured 377 parts per million, and this year’s high school graduates wore diapers. For 17 years Brood X cicadas have tunneled deep in U.S. soils and fed on sap drawn through tree roots. Slowly the nymphs grew in the dark until May, when billions emerged above ground for the last stretch of their lifecycle: a short-lived cacophony of song, mating, and, finally, death. The sudden surge in biomass supplies food to birds, fertilizer for soils, and a rare chance for scientists and the public to witness a phenomenon unmatched in the natural world. For Chris Linder, it was an opportunity to photograph a hot spot in his Maryland backyard, where he often stayed up shooting until 2 or 3 a.m., on the cicadas’ nocturnal schedule.

Linder first noticed something was afoot in late March. "It all started with a fox," he says. Over the course of several days, the red fox had dug a muddy pit stretching 20 by 20 feet. When Linder went to investigate, he noticed narrow tunnels leading up to the surface, which he soon learned were dug by cicadas. Months before it was scheduled to emerge, Brood X was getting ready for its big debut. 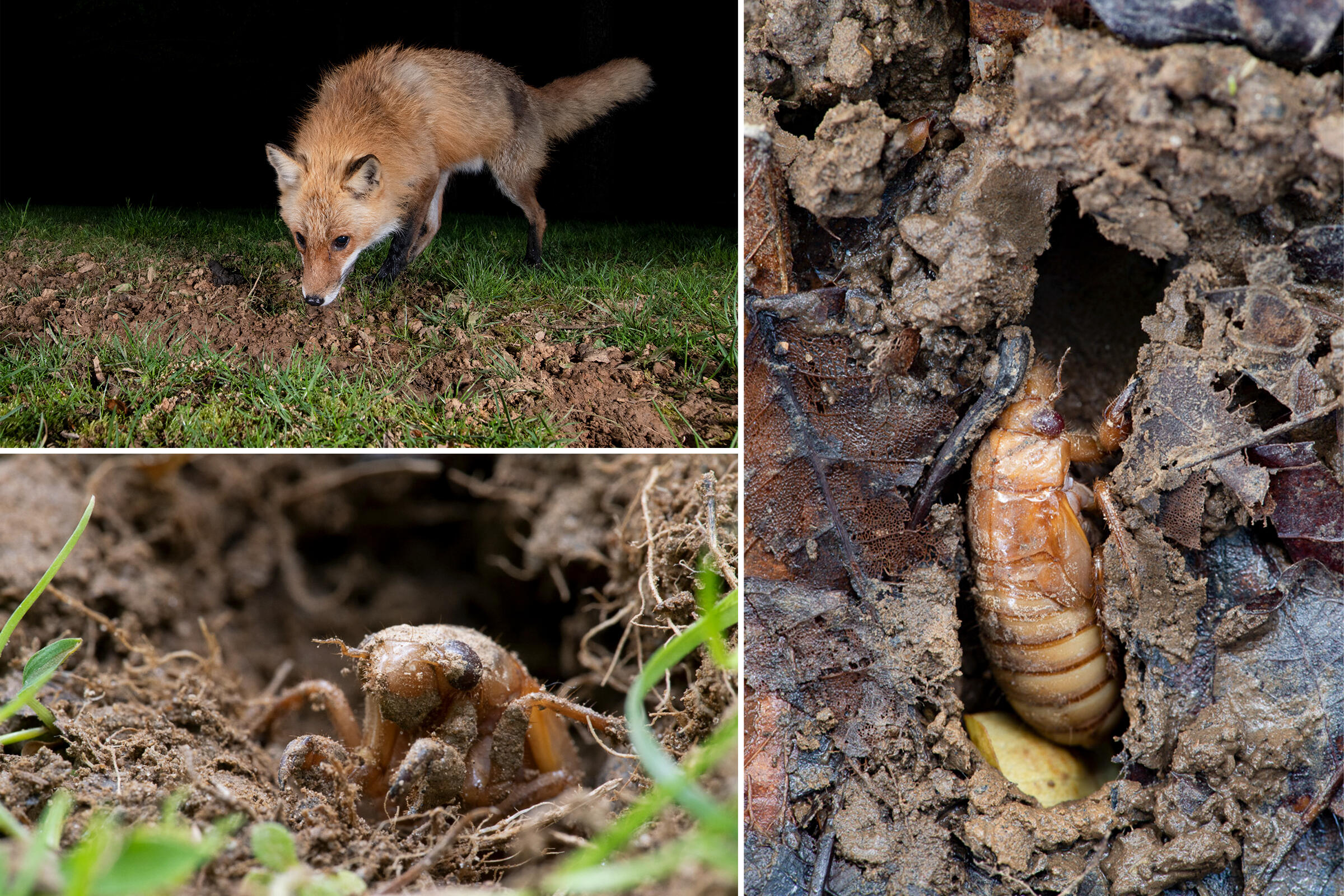 Brood X is made up of three cicada species that emerge synchronously (within roughly a week of each other) in a patchy distribution across up to 15 states east of the Rockies. Brood X is among the largest of 15 periodical cicada broods, all of which spend 13 or 17 years developing underground. Over the decades, many broods’ ranges have shrunk as people turn over cicada-filled soils to plant crops and dig foundations. “They’re an indicator of environmental health,” Linder says. “If we keep removing trees, if we keep turning natural areas into urban areas, cicadas have no choice but to decline.” 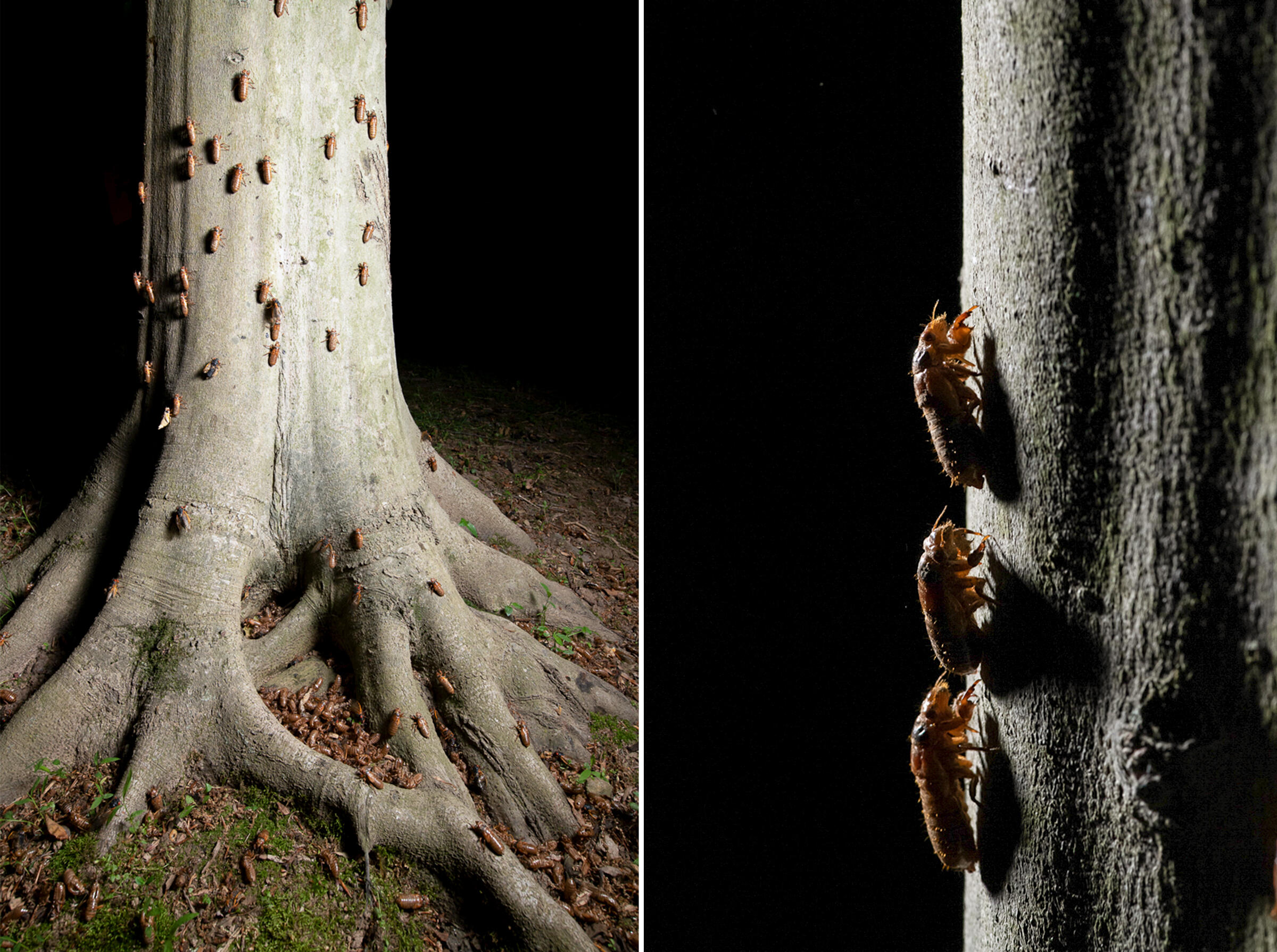 Around May, as North America warms in spring, cicadas prepare to emerge. They enter their tunnels and when the soil reaches about 64 degrees, they’re driven up and out. “They’ll hit something and start going up—it could be a fence, your leg, a wall, a tree, a rake, anything vertical,” Linder says. “They would get to my neck in 2 to 3 minutes.” Nymphs (above) crack their exoskeletons down the back and emerge as adults (below), leaving empty husks stuck to trees or piled in heaps. The soft, fresh adults lie low while their organs harden. 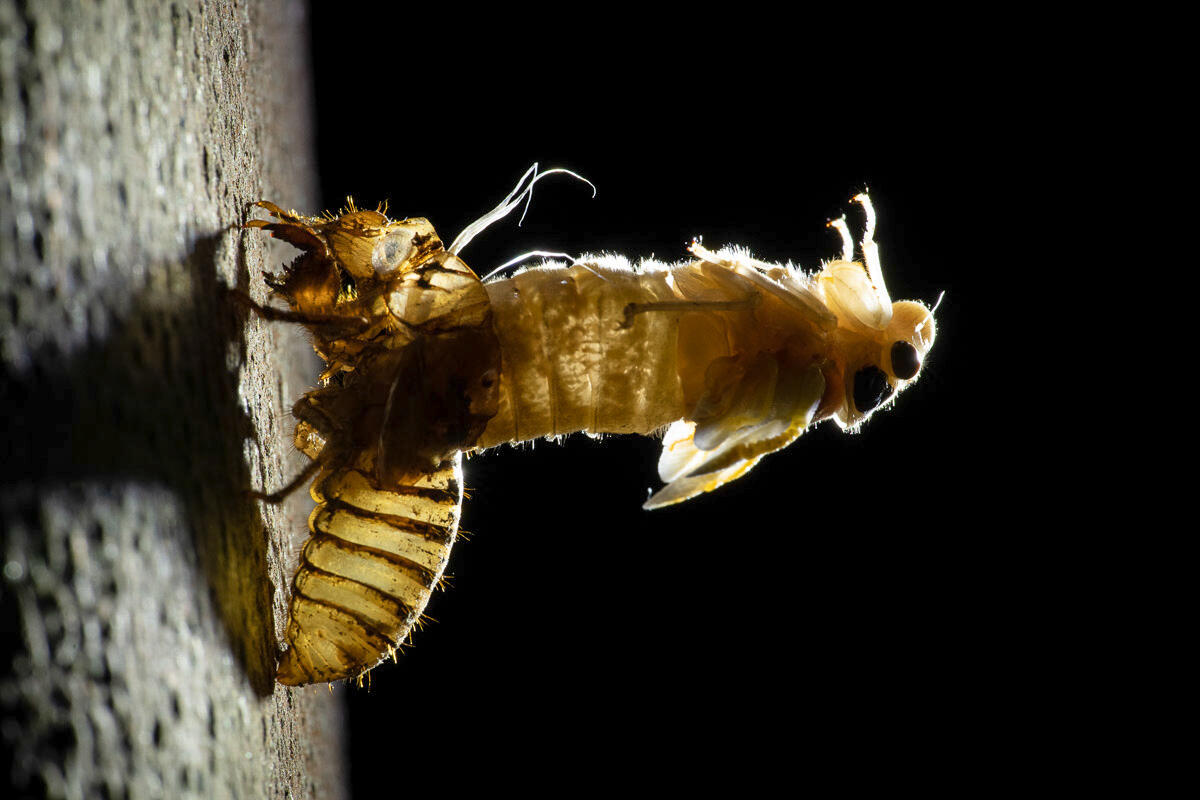 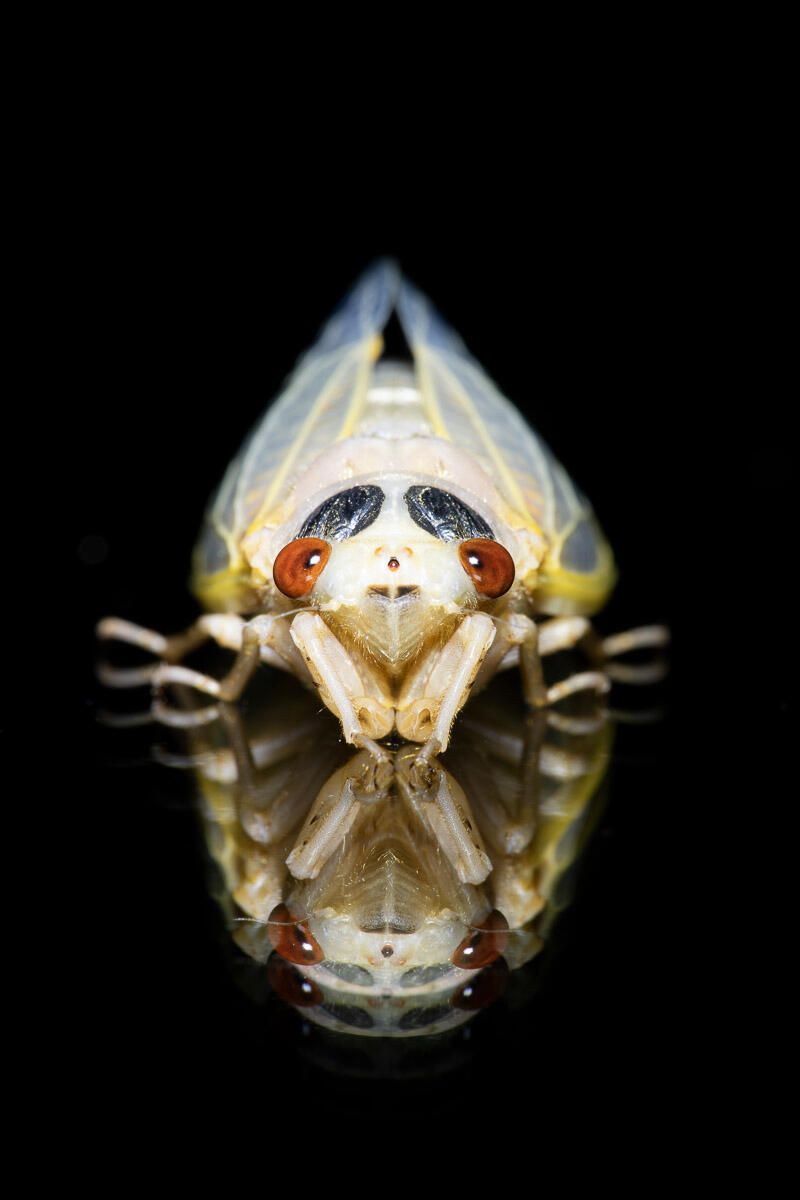 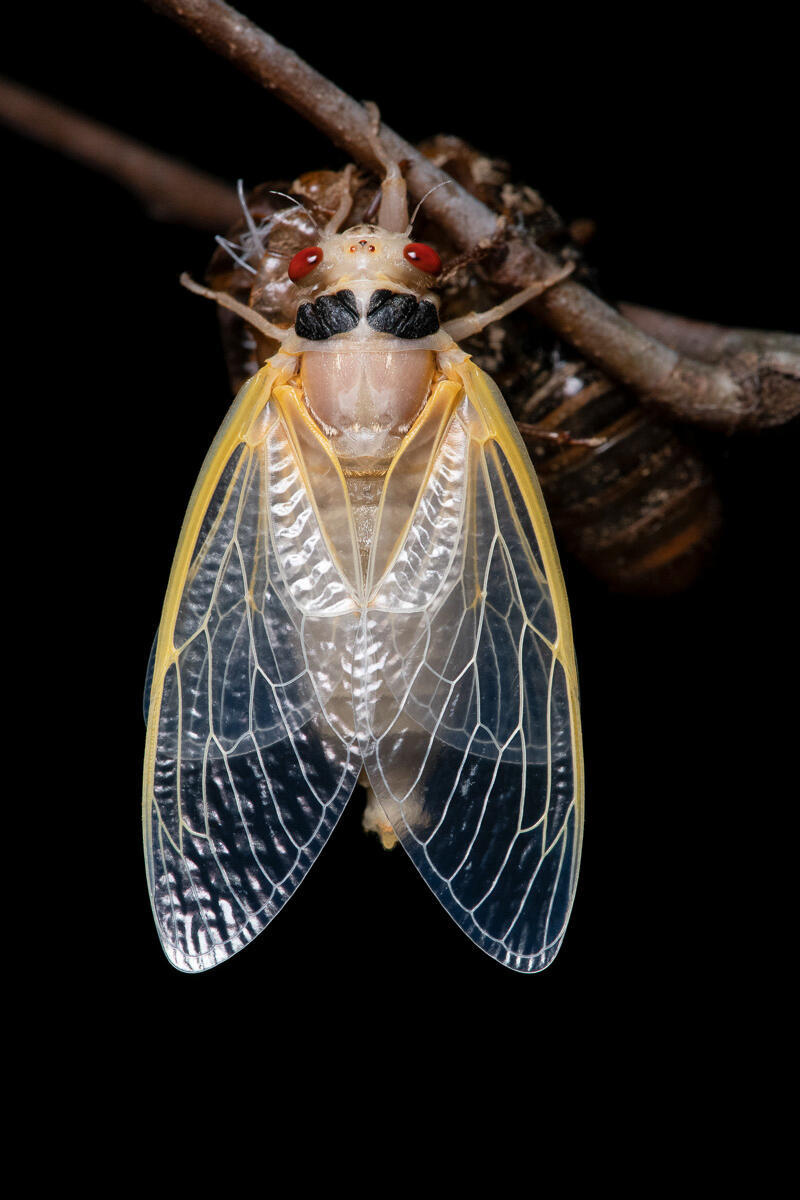 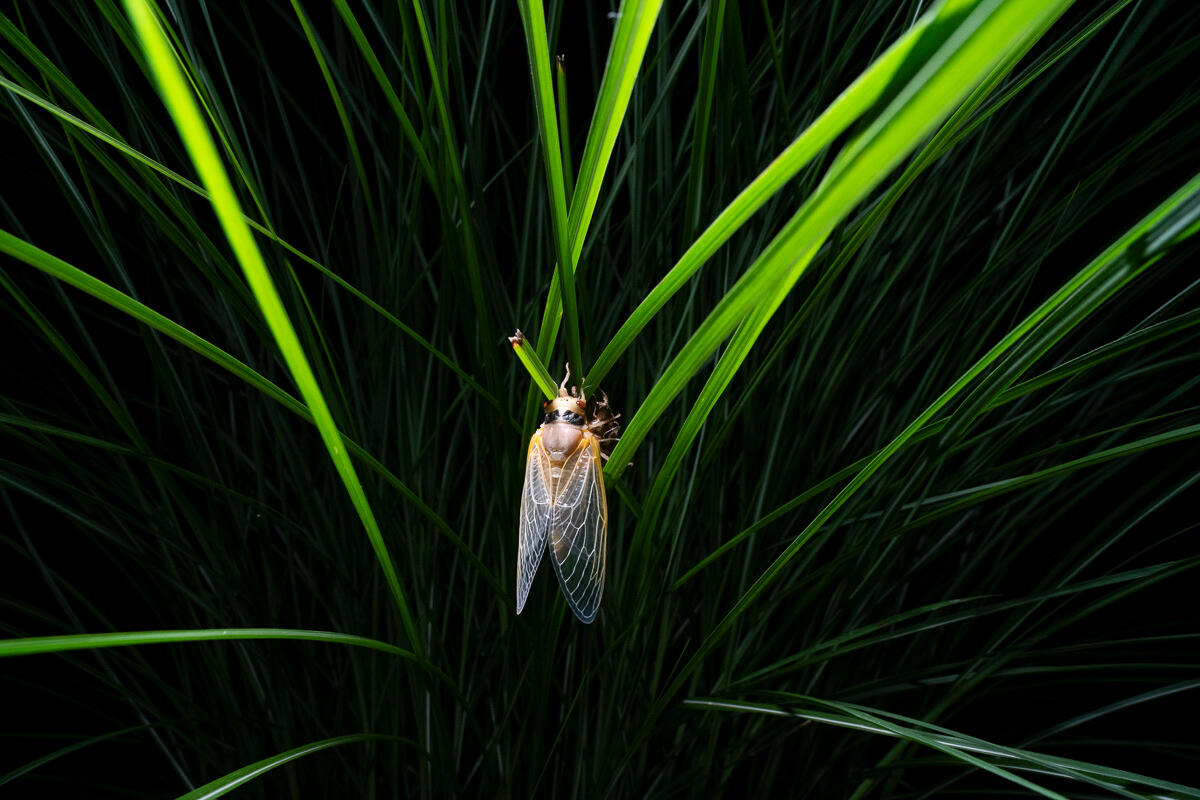 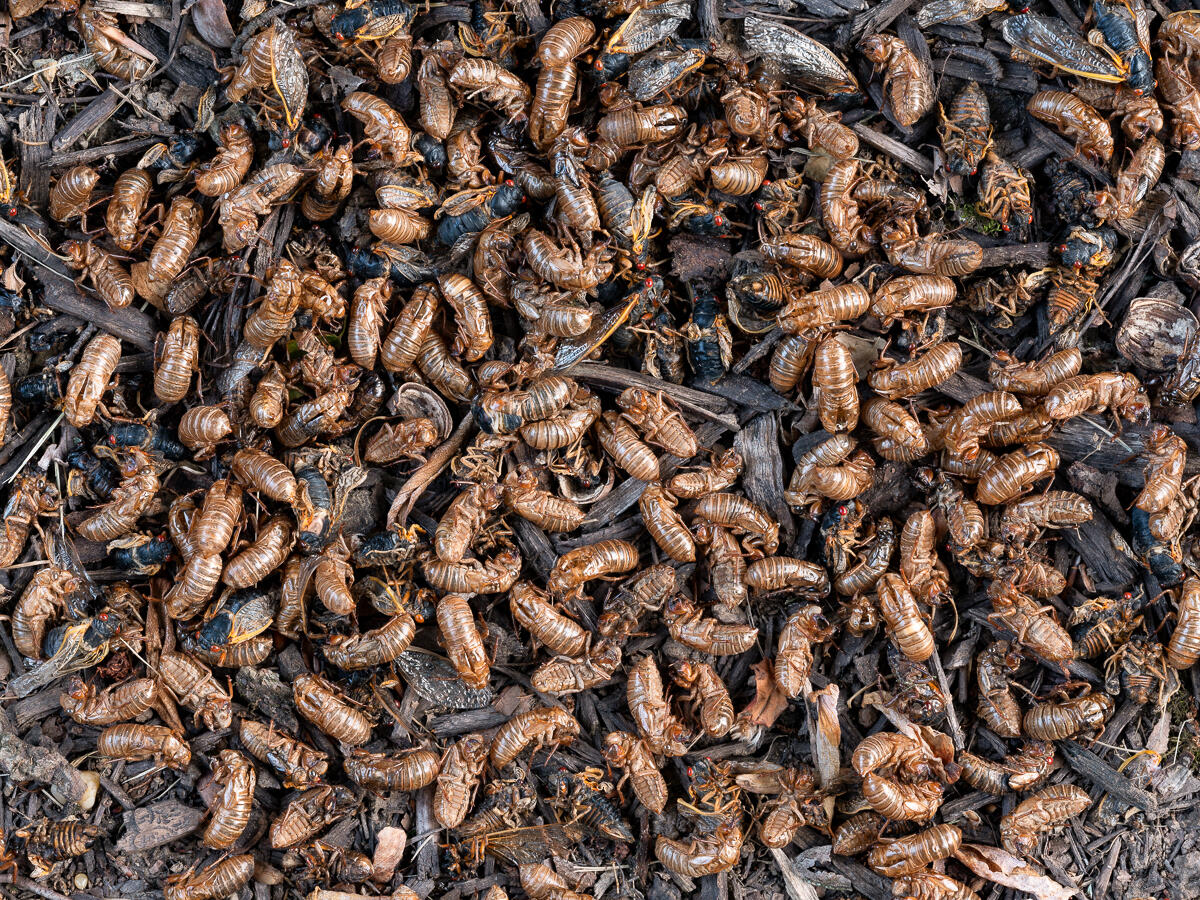 After they've molted, for about two weeks, cicadas gather in chorus centers. Like birds on a lek, the males broadcast—their racket can reach the sound intensity of a lawnmower—to attract females. After mating, females lay eggs in small twigs; six to eight weeks later, tiny nymphs rain down, burrow into the soil, and begin drinking tree xylem from rootlets. As they grow larger, they burrow deeper to reach larger roots. After Brood X nymphs burrow into the soil this year, they will drink underground until 2038.

This astonishing synchronized cicada emergence has a purpose: safety in numbers. Cicadas make easy prey. “They’re not super graceful flyers,” says Zoe Getman-Pickering, a George Washington University ecologist working on a long-term study of cicadas. “They’re big and showy and fluttery and they don’t go very far.” Anything that can catch a cicada—birds, squirrels, foxes, fish, even ants—will eat one. To live long enough to reproduce, cicadas must completely overwhelm the system, emerging en masse to satiate predators’ appetites 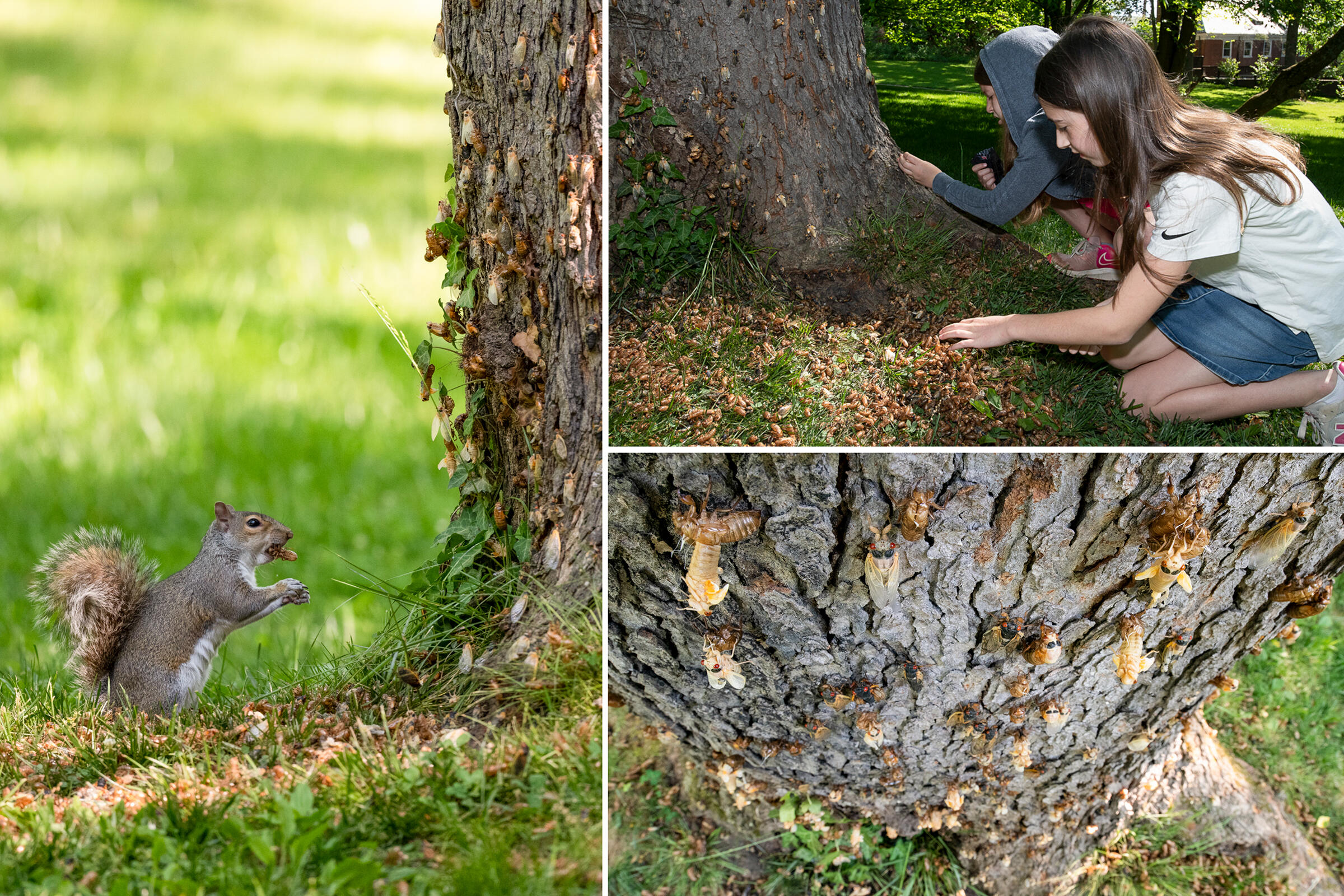 Studying the cicadas takes an army of scientists to match them, including middle school students (above) invited to Getman-Pickering's research site at Audubon Naturalist Society Woodend Sanctuary in Chevy Chase, Maryland. It also involves adult birders. "There's not enough of us [scientists] to observe as many birds as we want to observe," she says. So, she's developed a protocol called Brood X Bird Feast, where birders can submit observations of birds eating cicadas. Outside of about 30 bird species common at their study site, "we're relying on community science to get as many other bird species as we can," Getman-Pickering says.

At her Maryland field site, Getman-Pickering (pictured above, right) and her student Grace Soltis (above, left), a University of Maryland undergraduate, examine a clay caterpillar that may reveal whether birds favor cicadas over their typical prey. “We are already seeing birds of all sorts gorging,” she reported in early June—Red-winged Blackbirds, Common Grackle, swallows, sparrows, bluebirds, robins, wrens, and even fruit-eaters like Cedar Waxwings. Most birds remove the gossamer wings before dining (below, fifth slide), leaving them in piles across the field site. 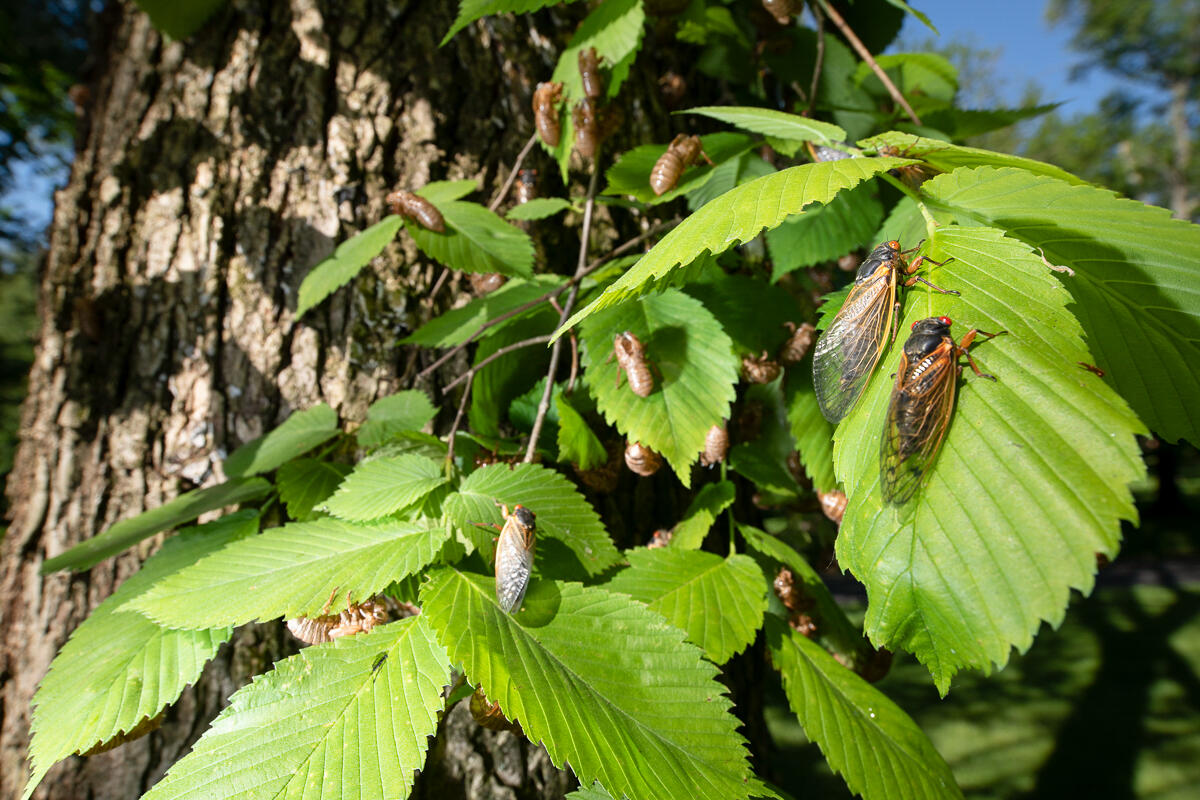 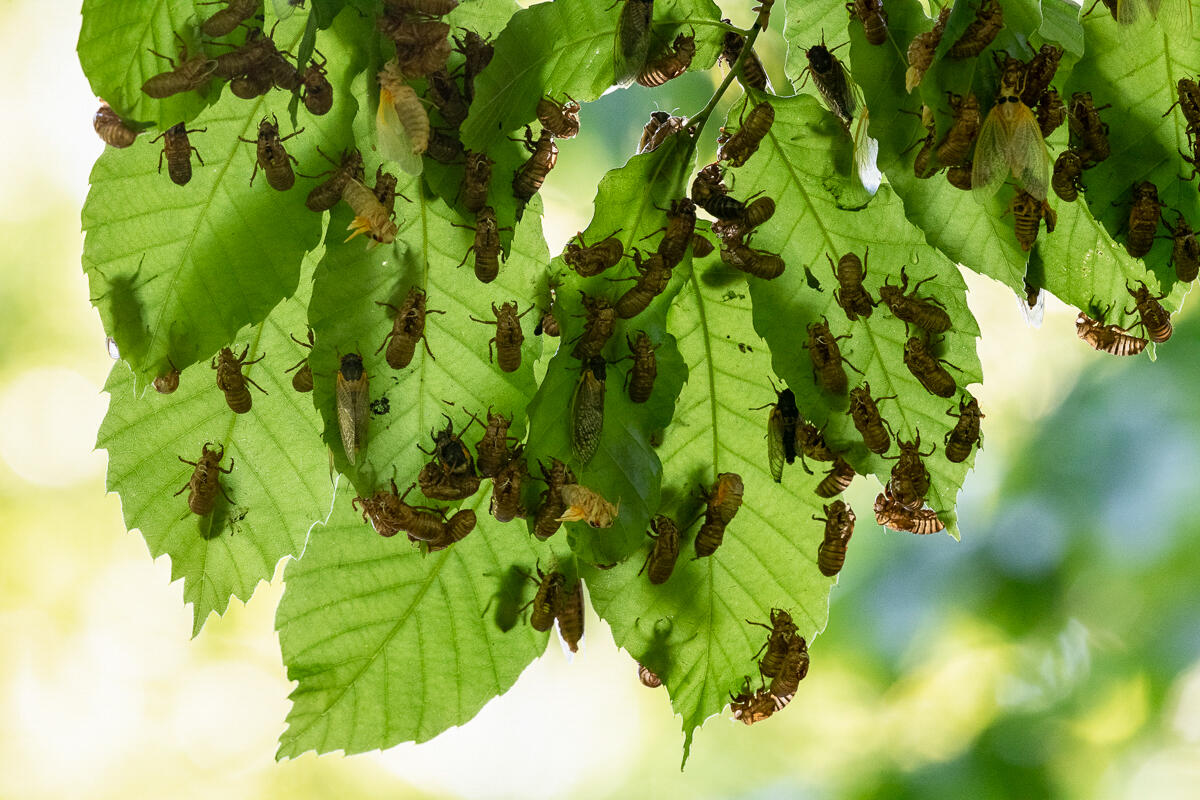 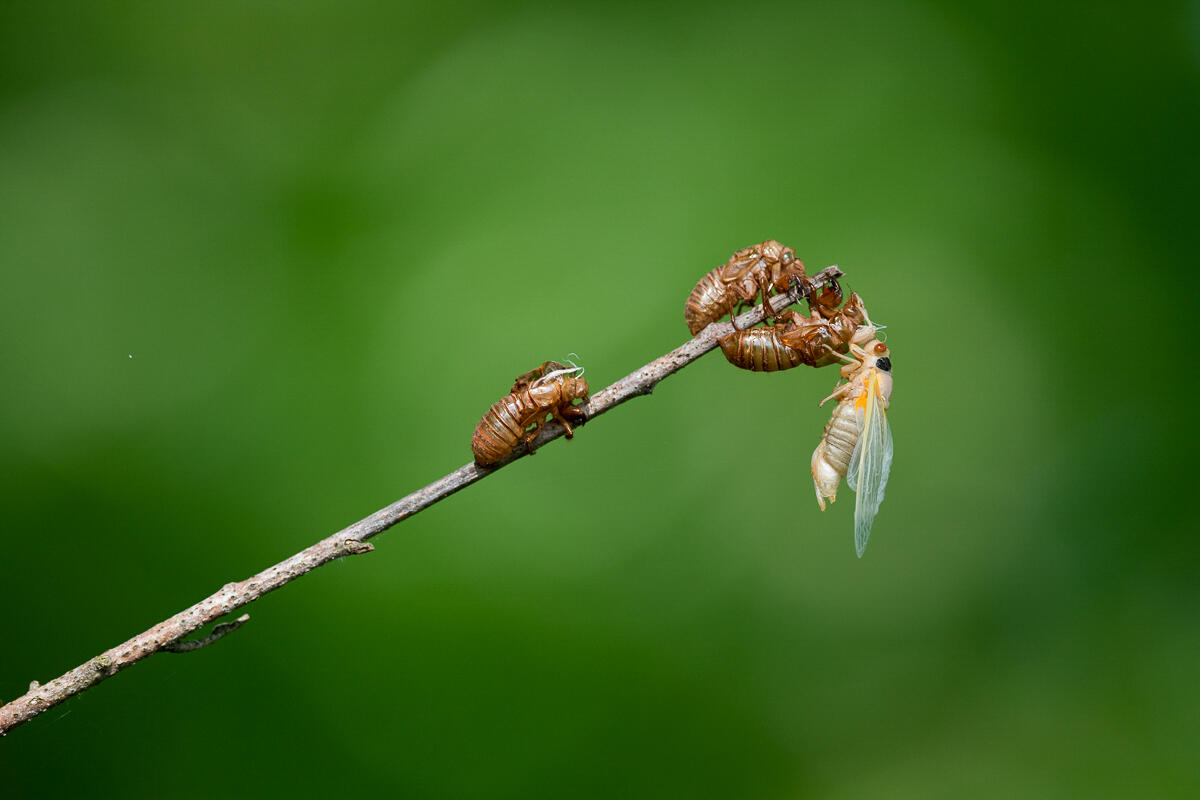 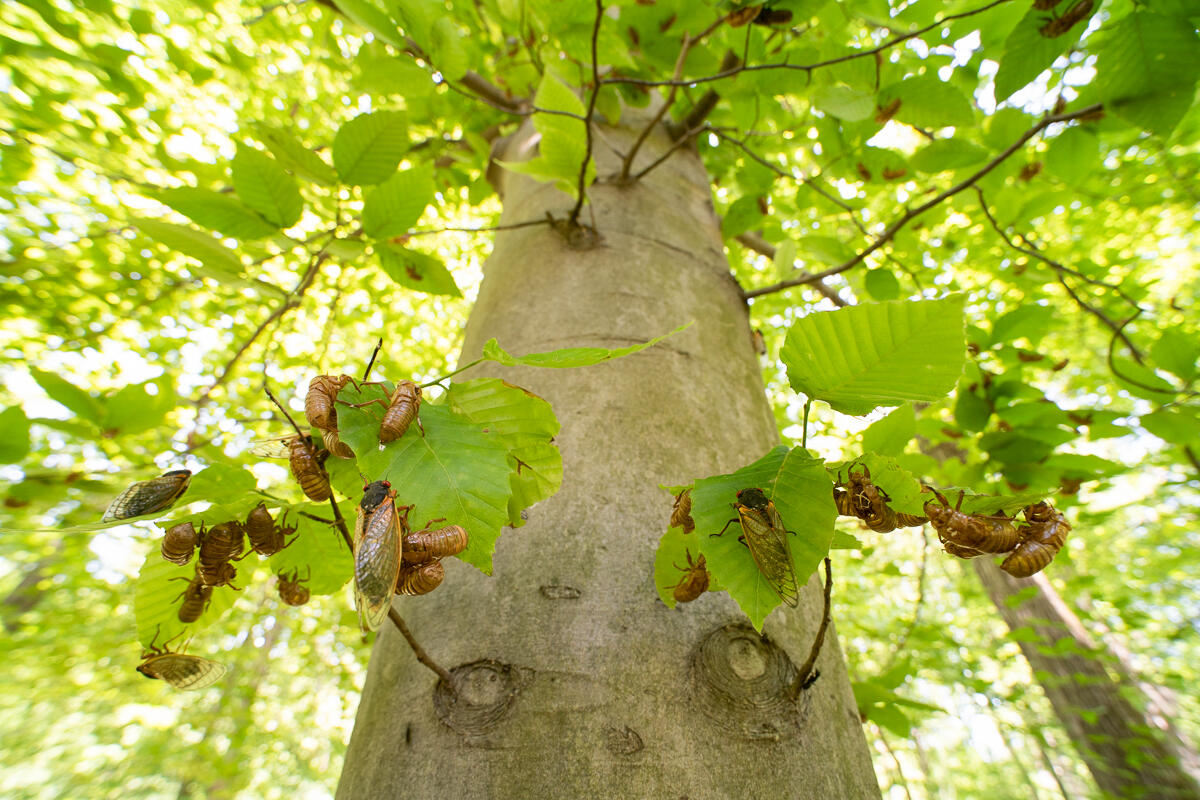 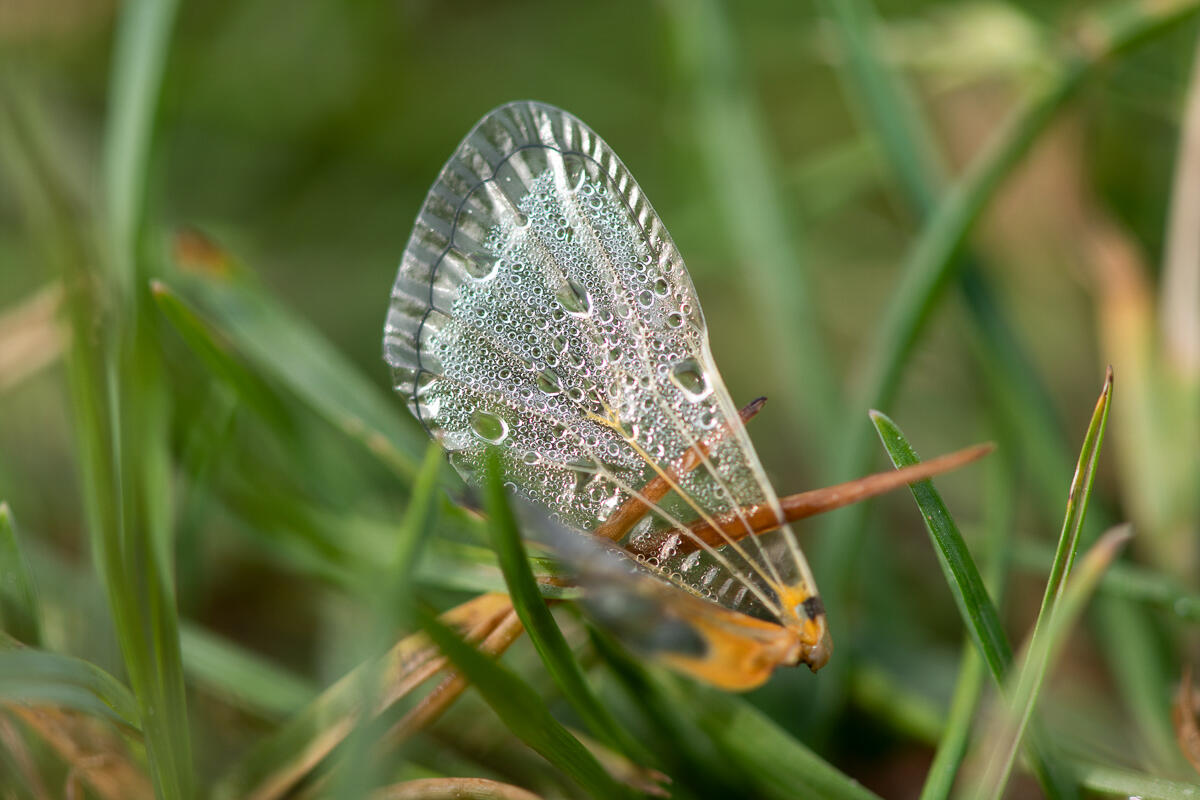 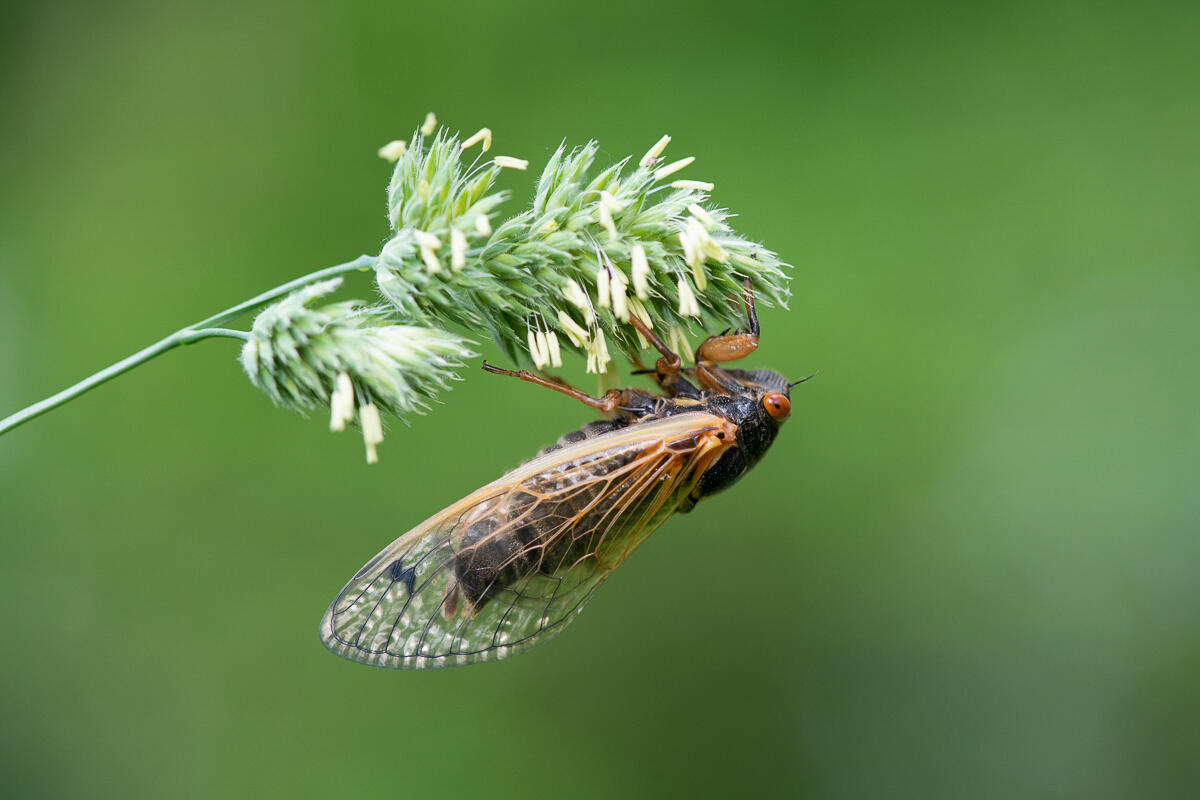 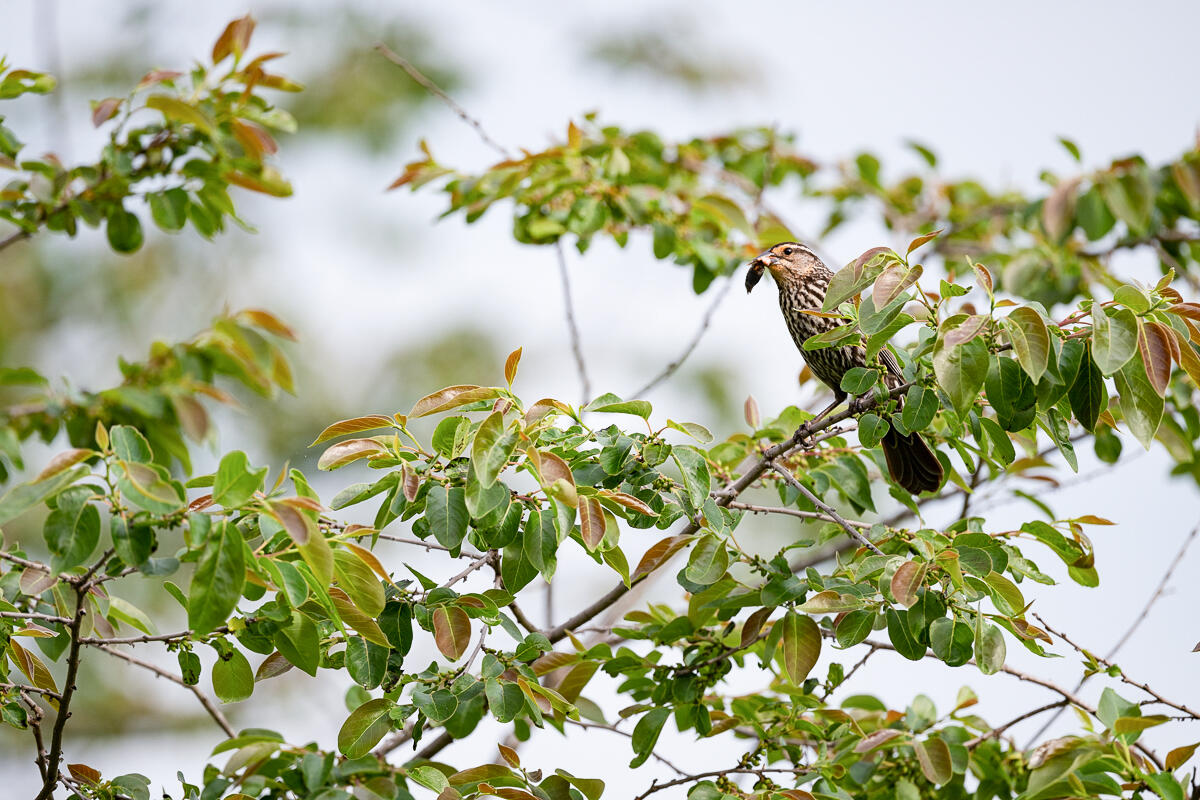 The vast, fleeting food source lets birds, such as Common Grackles (below), fledge extra chicks. Predators are so busy eating cicadas, they don't have time to devour eggs and young birds; also, there is no reason for a chick to go hungry amid a cicada emergence. But scientists don’t know how bird populations are affected long-term. Over the next two years Getman-Pickering will measure Brood X’s ripple effect across the food chain—from cicadas to birds to caterpillars, parasitoid wasps, trees, and more—through field and lab studies. “We’re expecting the emergence to perturb the entire forest ecosystem," she says. "And it will be mediated by birds." 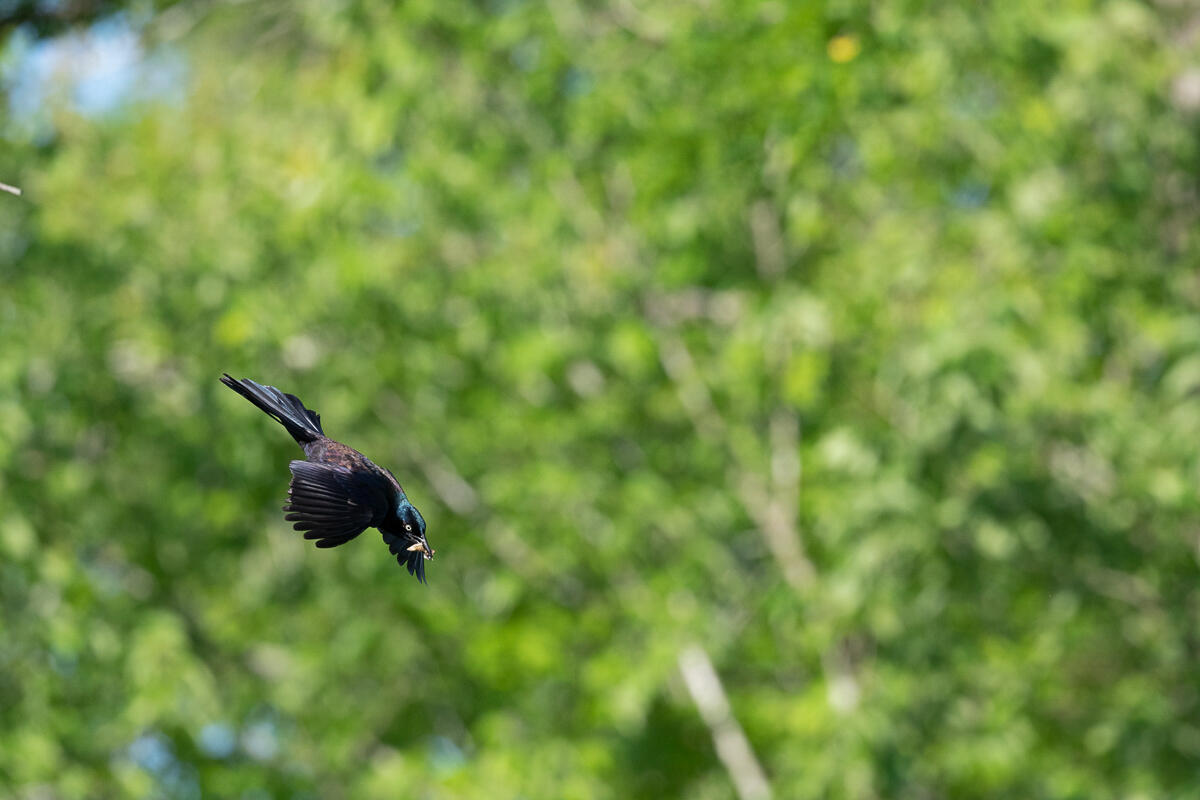 Most cicadas emerge at night, and Zoe-Pickerman suspects they do so specifically to avoid avian predators. Linder adapted to their nocturnal schedule, often shooting photos until dawn. “The whole forest is more alive at night than during the day,” he says. He saw foxes, frogs, millipedes, centipedes, and spiders, and dragged his kids out of bed to show them millions of wriggling worms sensitive to his flash. After a couple hours’ sleep, he’d wake before dawn to shoot more. In those early hours he couldn’t help but relate to the newly emergent cicadas. “Here’s their first sunrise,” he recalls thinking. “It must be incredible.” 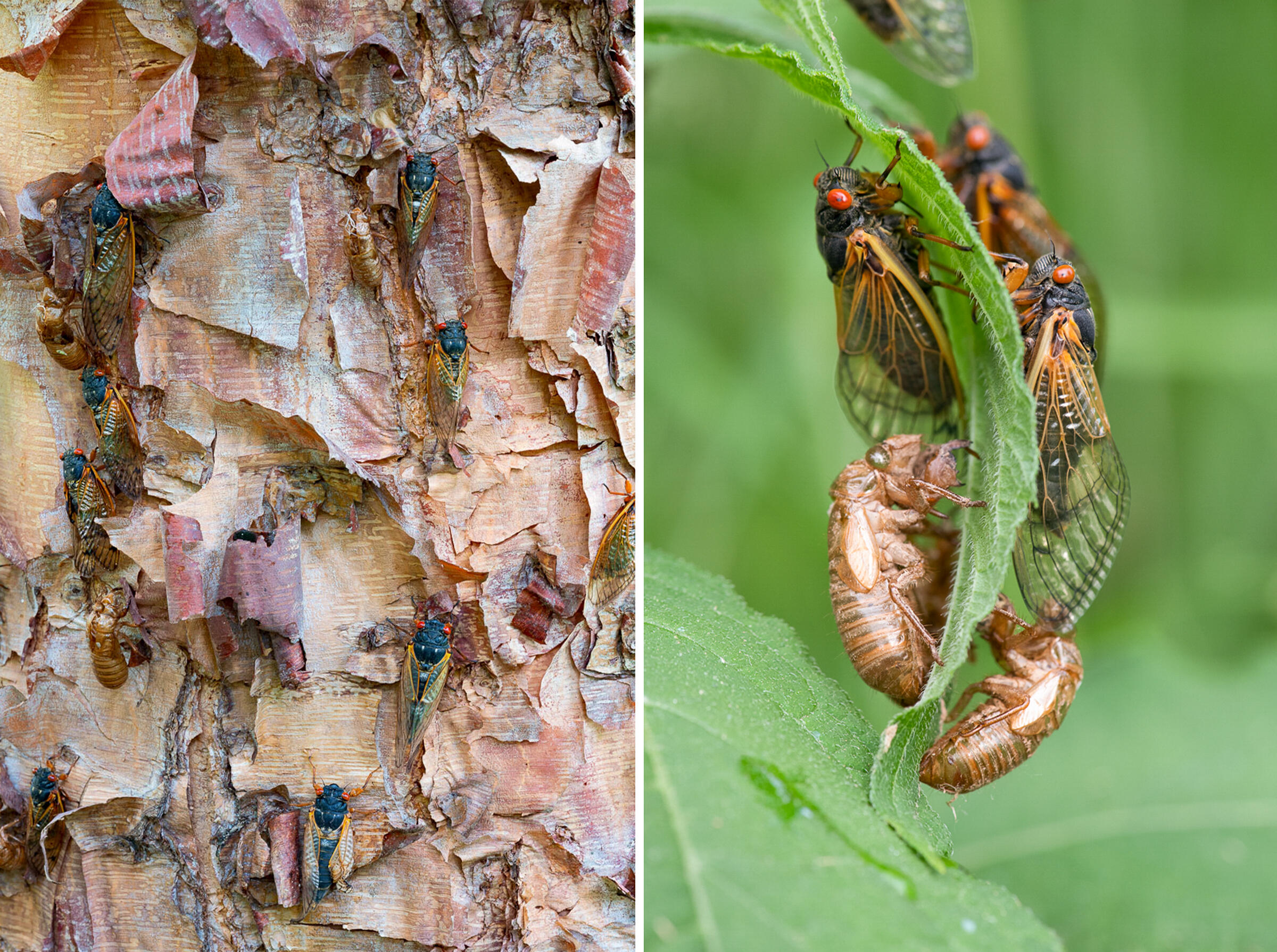 Getman-Pickering's research isn't just about understanding this fascinating phenomenon. Her work also applies to other instances of mass insect emergence. Invasive insect outbreaks are growing more common; native bugs, like bark beetles, are experiencing periodical population explosions driven by global climate change. Understanding how bird populations respond to the resource pulses generated by insect outbreaks—whether cicada or emerald ash borer or hemlock woody adelgid—will only become more crucial during the coming decades. “Cicadas keep such good time," Getman-Pickering says. "We can study them and use them as a model for what will happen when we have other explosions of less predictable insects.” 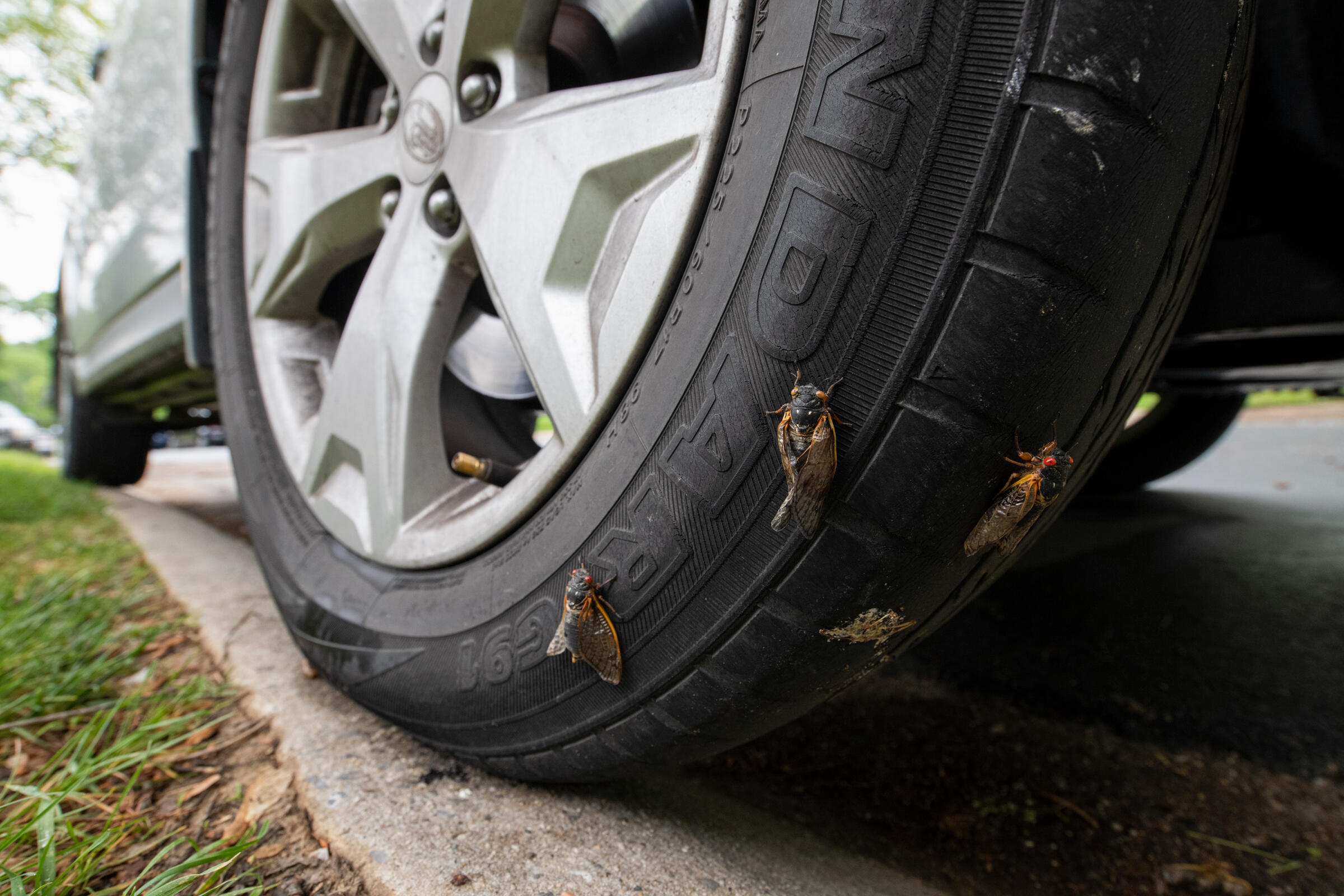 Now at the end of June, the cicadas are singing their final tunes. Dead bodies are piling up on the forest floor after the insects finish mating and laying eggs to supply the next generation. Even after death, cicadas contributions continue. Ants, fungus, and other decomposers break down cicadas' bodies, supplying fertilizer to the earth.

Many people are surely happy to see them go—to no longer have to pick cicadas and their molted shells off of cars, fences, benches, and trees, or see them squashed against the sidewalk. For others, their departure is bittersweet. "They’re getting these snapshots of humans taking over the planet every 17 years," Linder says. Who knows what our world will be like the next time Brood X pays us a visit? 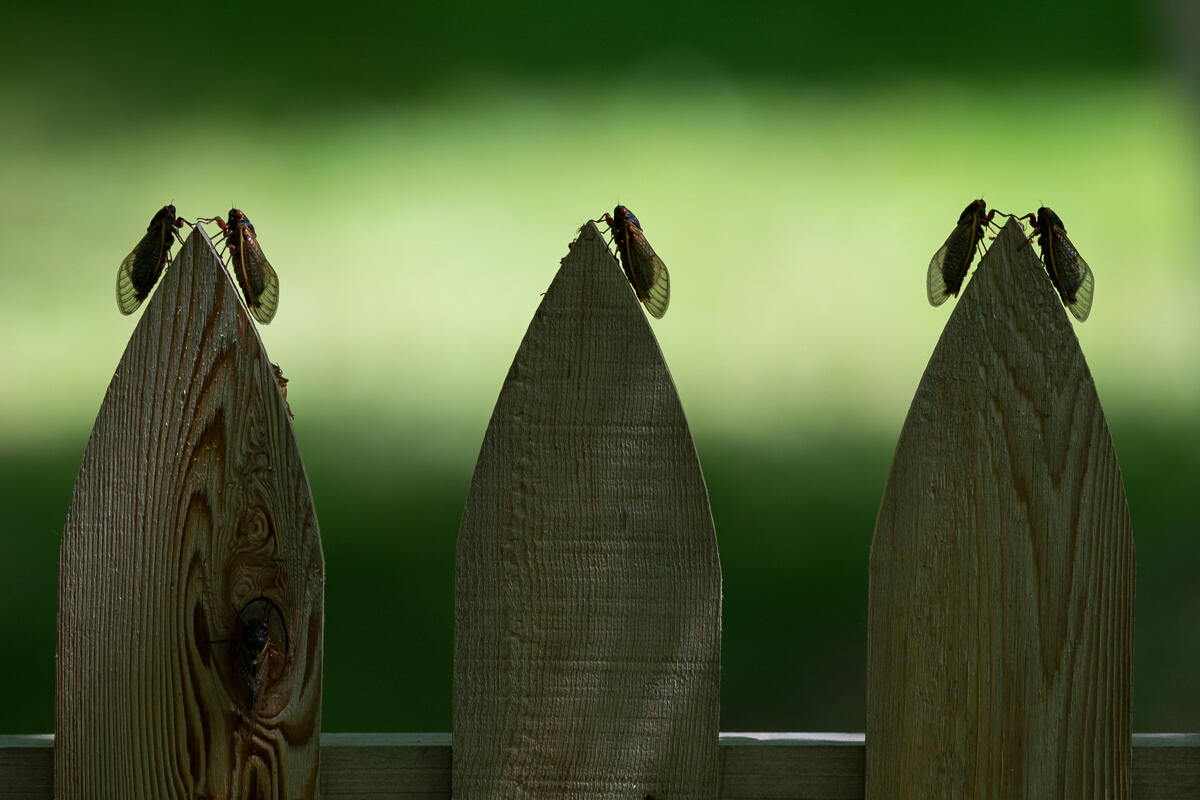