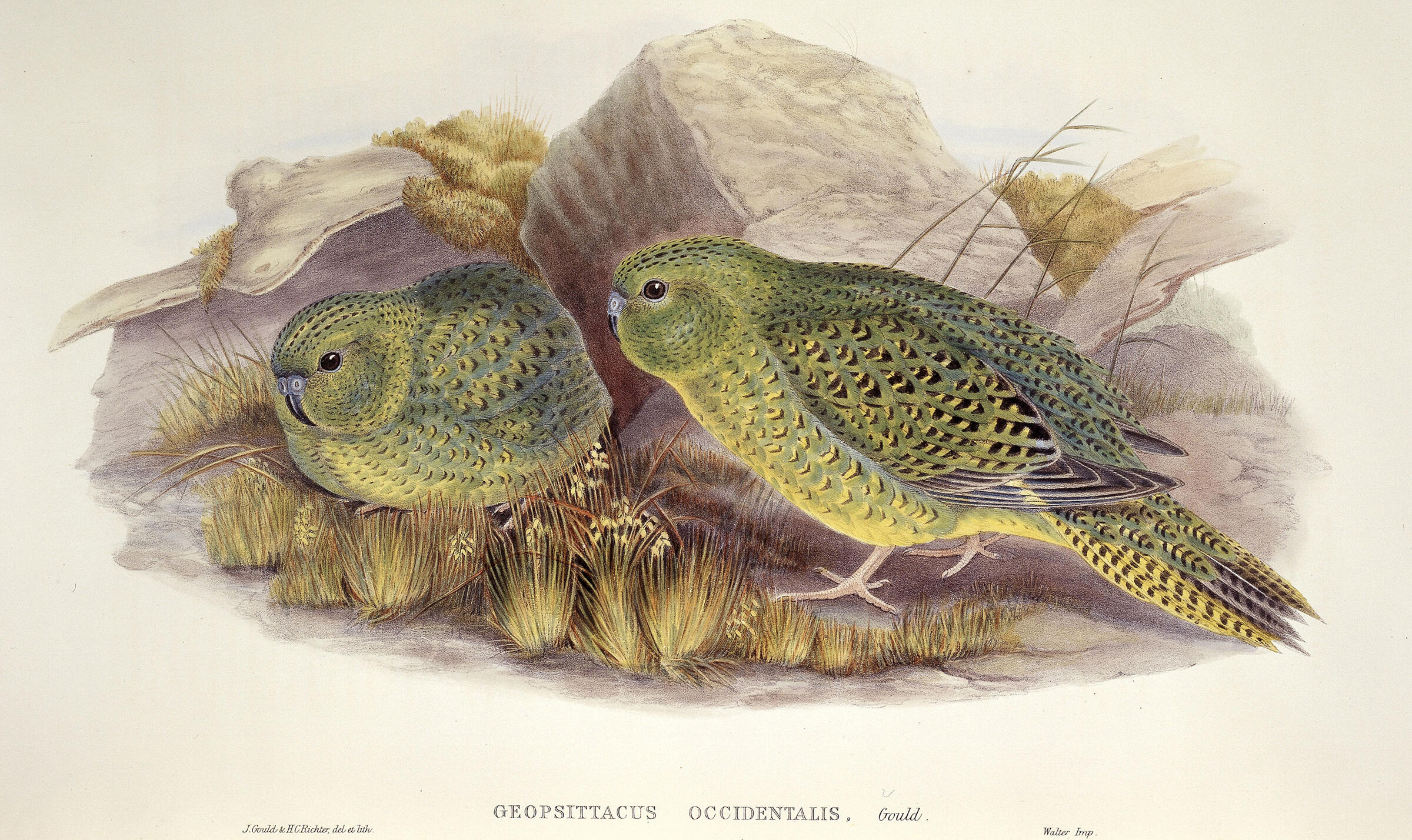 See Rare Footage of a Night Parrot in the Australian Bush

Scientists hope that by tracking a long-lost species, they can keep it from going extinct.

A top-secret conservation mission is underway in Australia. The objective: to protect the mysterious Night Parrot, which was recently rediscovered after vanishing for more than a century.

Unlike its flashier, chattier cousins, this nocturnal, ground-dwelling parrot does little to draw attention to itself. In fact, it’s so reclusive that for decades it was thought to be extinct. But in 2013 cinematographer and naturalist John Young spotted a Night Parrot during a nighttime expedition and even managed to snap a few photos. Young shared his breakthrough with researchers, who then set out to find and tag one of the birds—an incredible feat that was caught earlier this year on video and aired on Australian TV this past week. (See the video below, courtesy of The Guardian.)

Night Parrots are medium-sized birds—about 10 inches long—that live only in arid and semi-arid zones of Australia. Also referred to as Porcupine Parrots—because of the spikey grass they tend to inhabit—they’re covered in bright yellow and green plumage with ebony spots. During the day the birds disappear into dense, low vegetation, making them nearly impossible to track. Though much of their reproductive life is a mystery, it’s thought that Night Parrots nest in the thick grasses that grow in the wake of the summer’s intense rains. As is fitting considering their Aussie heritage, the parrots hop across the sandy landscape like kangaroos, reserving their wings for more threatening occasions.

Although current estimates of the Night Parrot population range between 50 and 250 individuals, many scientists trace the species’ decline back to the mid-1800s, when introduced predators, such as foxes and cats, were brought to Australia by European settlers. The last confirmed sighting of a live bird was in 1912. Since then the only evidence of the species’ survival was the discovery of two carcasses: one in 1990 and one in 2006 near a park in Queensland. But this lengthy absence didn’t deter Young, who pursued the ghostly parrots for more than 15 years, spending night after night scouring Australia’s grasslands and shrubby terrain. In 2013 all that work paid off.

After his encounter, Young shared his story and evidence with scientists. He also spoke to the press, although he didn’t disclose the Night Parrot’s whereabouts to protect it from eager birders and greedy poachers. It’s a decision that researchers from Bush Heritage Australia continue to honor two years later. ABC News in Australia recently reported that about 140,000 acres in Queensland have been turned into a conservation reserve to protect the Night Parrot population; Bush Heritage Australia, in conjunction with local government officials and other scientists in the field, hope to safeguard the phantom parrot from external threats, including fire, habitat degradation, and predation. But they won’t reveal exactly where in the reserve the birds have been found.

The first step in saving the parrot, say experts, is to learn more about it. “Basic research into its habits, numbers, and movement will be essential to any kind of conservation efforts,” says Kenn Kaufman, Audubon’s field editor. And the Queensland preservation project has already made some headway: As seen in the recently released video, Steve Murphy, one of the scientists on the Night Parrot recovery team, was able to catch and tag one of the birds with a radio transmitter, which should provide valuable information about the species’ movement and behavior. Murphy’s crew also set up camera traps in hopes of monitoring the birds during their nightly forays.

“This is the biggest story of conservation in Australia today,” Murphy said in an interview with ABC News. “It’s just such a critical thing that we do everything that we can to save this species and bring it back from the brink of extinction.”