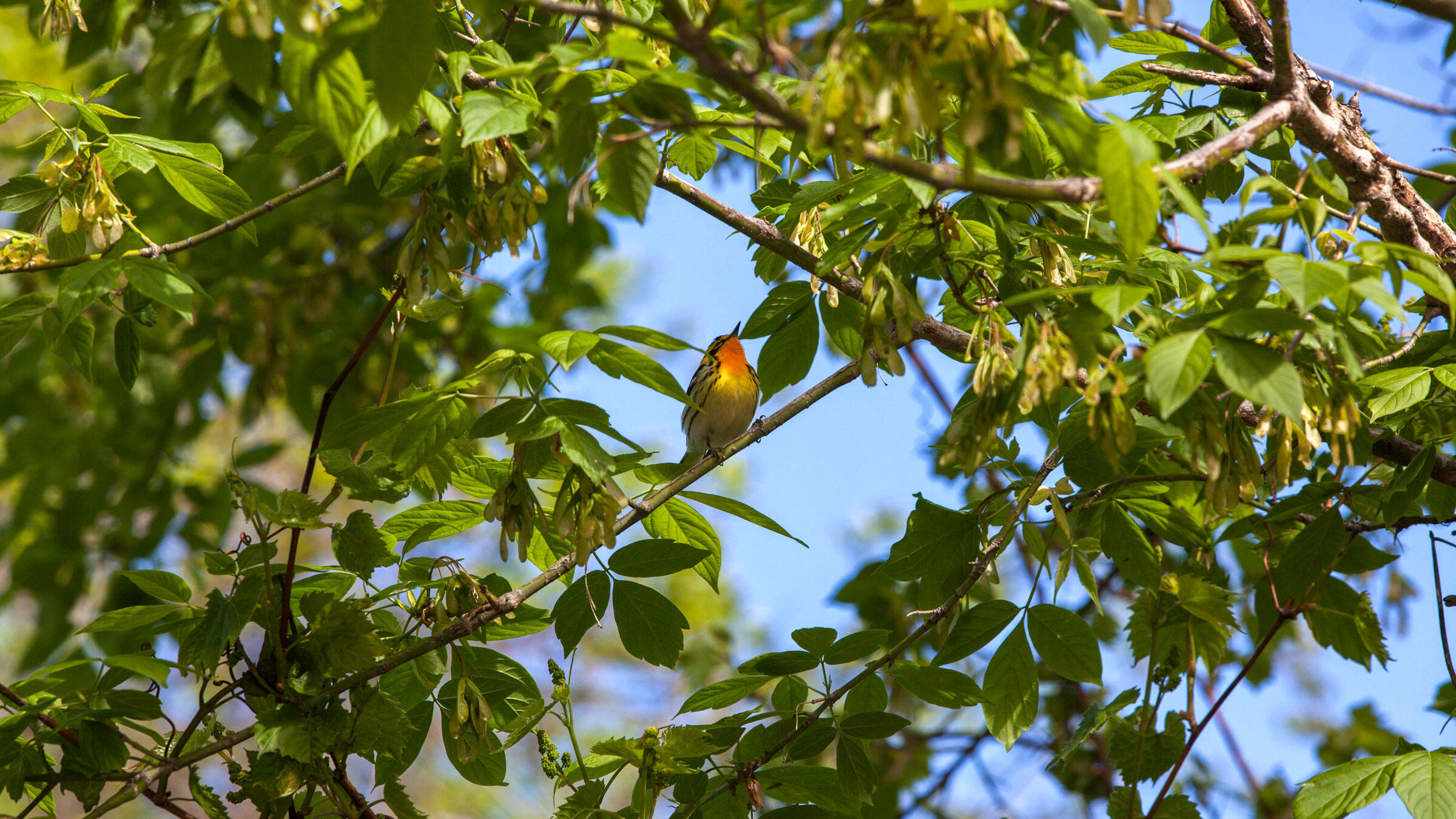 A Blackburnian Warbler sings in Ohio's Magee Marsh Wildlife Area, one of the best places in the country to see (and photograph) migrating warblers. Photo: Camilla Cerea/Audubon

Migrant traps aren't just a boon to birds—they put photographers in a sweet spot too.

Migrant warblers are among the most difficult of avian subjects. The tiny birds hide in the leaves, often in dark shadows, and they chase insects at a frenetic pace—rarely sitting still for more than a second or two. As photographers, we need to do what we can to stack the deck in our favor.

Location, location, location (and weather) are the most important determining factors of any successful photo shoot with migrant warblers. While we can’t do anything to change the weather, we can put ourselves in the best locations to take advantage of the most birds in the most favorable settings.

But if traveling isn’t an option, don’t fret. A city park surrounded by concrete jungle, a wooded swale in the midst of agricultural land, sky islands of the desert southwest, or any riparian corridor through less than favorable habitat can all be very productive sites to photograph migrant warblers.

The lakefront wood lot at Magee is arguably the best place in North America to photograph northbound migrant warblers, especially during the first week of May. After falling out, they may wait days for favorable conditions before making the journey across Lake Erie. As at any migrant hot spot, the leeward or most protected part of the woods generally holds the greatest concentrations of warblers. Magee’s boardwalk and parking lot areas provide easy (though crowded) access. The Black Swamp Bird Observatory, located at the entrance to the marsh, has extensive information on local birding hotspots, including downloadable maps.

Across Lake Erie from Magee Marsh is the famed Point Pelee. Migration peaks there in mid-May, and the birds are spread out over a larger area so there is more habitat to explore. Most photographers opt to start near the tip at sunrise and work their way north, following the various trails that spread out as the land mass widens. A tram will help shuttle you and your gear from the main parking area to the point, but it doesn’t run early enough to get you there for sunrise. Ojibway Nature Center offers great insights on birding Point Pelee and the surrounding areas.

Flocks of nocturnal migrating warblers greeting sunrise high over Lake Huron will seek the closest available habitat to rest and refuel for the day. Tawas Point juts well into the lake and attracts the warblers and other songbirds like a magnet. The soft sand of the point will make short trails seem exceedingly long. The best times to visit will most likely be during the second or third week of May, but as with all migrant hotspots the best days are truly weather-dependent. Cold days with north or east winds are likely to be unproductive even during the peak migration period. If weather is not on your side, be sure to drive through nearby Tuttle Marsh to see what photographic subjects might be available. For more information about birding Tawas Point and the surrounding area, refer to this article in ABA’s 2015 Birder’s Guide.

For the warbler photographer who just can’t wait, South Padre is the farthest south of the hotspots and as such the warblers arrive here earlier than other locations. The first migrant warblers start to appear in early March and migration really picks up by the end of the month, continuing into the first weeks of April. This barrier island has few trees so there are fewer places to search for birds, but concentrations can be great. The South Padre Island Convention Center trails are probably the best place on the island to seek out migrant warblers. On a slow passerine day you are sure to find many wading and shorebirds on the tidal flats to occupy your time. South Padre Island Birding and Nature Center is an excellent place to start planning your trip.

Dauphin Island sits just off the coast of Alabama and is the first stop for warblers crossing the gulf from the Yucatan Peninsula in Mexico. Some species will achieve their greatest densities by April 1, but for the best diversity plan to visit during the first two weeks of April. Because birds depart the Yucatan at dusk for an arduous flight of 18 hours or more, birds may not make landfall until mid-afternoon. Popular photography locations include water features at Shell Mound Park and Goat Tree Reserve, though these may be less productive in wet years. Your longest telephoto may be overkill on the trails at Goat Tree Reserve as vegetation is often quite close to the trail. Be on the lookout for bottlebrush trees on Dauphin Island and other southern hotspots as several species of warblers are drawn to the red flowers. The website for Dauphin Island Bird Sanctuaries links to all of the best birding locations on the island.

While the middle two weeks of April are considered peak season, action heats up as early as late March on the Upper Texas Coast. At the southwest end of High Island, Boy Scout Woods has a boardwalk, and you can reserve the photo blind there as well. Just a few blocks away Eubank Woods features a younger, more successional type of growth; the greater understory provides opportunities for birds to be closer to the ground. At the other end of the island Sabine Woods has a water feature that draws warblers and other birds down to good photographic range. Plan to arrive at the water drip early or visit on a weekday to avoid the crowds. Houston Audubon has maps and additional information on their site devoted to the above sanctuaries. In addition you will find information about several other popular High Island birding sites, including Smith Oaks, popular rookery platforms, and S.E. Gast Red Bay Sanctuary.

In late May and early June, when spring migration is winding down or is a distant memory over much of the rest of North America, Whitefish Point on Lake Superior is just reaching its stride.  The habitat is largely jack-pine woodlands with pockets of alder and other shrubs. This means the birds are rarely too high to photograph. In the event of heavy rain you can check out the museum and lighthouse at the point and explore nearby boreal forest for Spruce Grouse, crossbills, and Gray Jays. The website for the Whitefish Point Bird Observatory is the clearinghouse for information on birding the point.

Award-winning photographer Brian Zwiebel is co-owner and guide at Sabrewing Nature Tours. He has been photographing migrant warblers for more than 20 years and his images have been internationally published in various books and magazines.