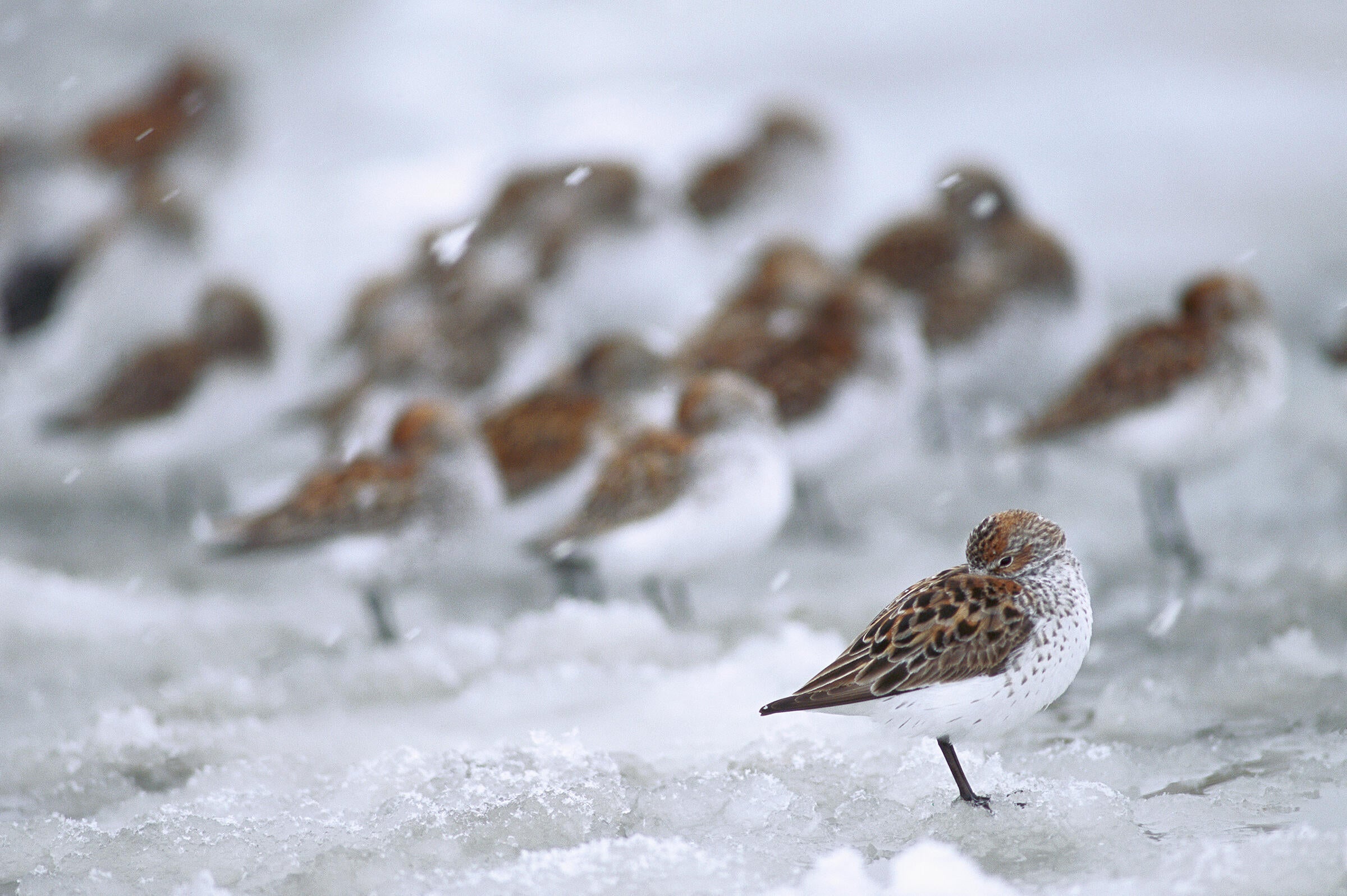 Due to late snowmelt, Western Sandpiper breeding was a bust in Alaska this summer, says shorebird ecologist Richard Lanctot of the U.S. Fish and Wildlife Service. Photo: Michael Quinton/Minden Pictures

Each spring shorebirds depart their southern hemisphere wintering grounds and fly thousands of miles to the Arctic. Their journeys are both epic and exquisitely choreographed, calibrated by evolution to coincide with the fleeting high-latitude summer. Time is of the essence. They have only a few months to build nests, lay eggs, and raise hungry chicks before heading back south. If the tundra doesn’t thaw shortly after their arrival, spurring the bounty of insects on which shorebirds feed, breeding cycles can be thrown into disarray or interrupted entirely.

That’s what happened this year across much of the region, as an unusually cold Arctic summer appears to have stunted reproduction in many shorebird populations. One barren season doesn’t spell doom. But in a seeming paradox, climate change may produce more early-summer cold snaps even as the Arctic in aggregate warms, and more breeding failures with it.

“There doesn’t seem to be a ‘normal’ anymore in the Arctic,” says Jennie Rausch, a shorebird specialist with Environment Canada.

Early in July, researchers reported that shorebirds on the eastern coast of Greenland had failed to raise young after a late thaw left their foraging and breeding grounds under several feet of snow. Adults struggled to avoid starvation; their reproductive failure was nearly complete.

Though conditions elsewhere in the Arctic were not quite so disastrous, they still were dire.

In the eastern Canadian Arctic, the next region over from Greenland in a clockwise circumpolar circuit, snow also lingered well into June. The impacts won’t be fully known until late October, when southbound migrant counts conclude, but early numbers don’t look good. When Larry Niles, a biologist with the American Littoral Society and Conserve Wildlife Foundation of New Jersey, counted birds as they made their way past Cape Cod in September, “we saw no juveniles at all,” he says. That applies to each of the six species—Ruddy Turnstones, Semipalmated Sandpipers, Sanderlings, Dunlin, Short-billed Dowitcher, and critically endangered rufa Red Knot—Niles tracks.

The central Canadian Arctic “wasn’t quite as grim,” Rausch says, with snow melting only a week or so later than usual. Nesting success still seems to have been poor, though, caused by a dip in lemming numbers that led hungry predators to feed on eggs and nestlings instead.

In northern Alaska, snowmelt “took longer than I’d ever seen,” says shorebird ecologist Richard Lanctot of the U.S. Fish and Wildlife Service. Data on the consequences for shorebirds still need to be analyzed, he cautions, and study sites are “just postage stamps of the big Arctic”—but it’s reasonable to think they reflect broader conditions, he says. If so, breeding was poor for each species at his sites: Pectoral, Western, Baird’s, Buff-breasted, White-breasted, and Semipalmated Sandpipers; Dunlin; Red-necked and Red Phalarope; American Golden Plover; and Long-billed Dowitchers.

Crossing from western Alaska to eastern Siberia, the trend appeared to continue. Pavel Tomkovich, a shorebird conservationist at Lomonosov Moscow State University, says that late snow melt and delayed breeding have prevailed across much of the Siberian Arctic. As with the central Canadian Arctic, central Siberia was quite warm in June—and, says Tomkovich, low lemming populations there led to high predation on shorebirds as well.

Altogether, it was a dark season for shorebirds.

Altogether it was a dark season for shorebirds. “They can tolerate a year or two of poor summers,” says Lanctot, “but if it was to go on for a long time, you’d start seeing overall population declines”—adding to already-precipitous declines caused by other human activities.

While scientists are generally loathe to blame any one season’s weather on climate change, this Arctic summer of unusual cold alternating with warm spots fits a telltale pattern. In recent years climatologists have suggested that the jet stream—the great current of air that courses from west to east around the northern hemisphere—has weakened as a consequence of warming, becoming prone to meandering and lingering. As a result, weather patterns “lock in place for a longer period of time,” says climatologist David Robinson of Rutgers University’s Global Snow Lab. What would once have been a brief cold spell turns into a long cold snap of the sort that delayed this year’s shorebird breeding.

In coming years Robinson expects more of “these flip-flops back and forth of persistently cold or persistently mild springs.” The latter is also problematic for breeding birds, as insects emerge before young shorebirds have hatched, and are already scarce by the time they should be packing on calories for the long migration ahead.

Other climate change-related challenges also affect shorebirds. Tropical storms may become more frequent and intense, throwing their migrations into disarray, and rising seas swallow the shorelines where they feed. Daunting as all this is, though, some species may adapt to changing conditions. Other human-caused problems may be more threatening.

“You can solve the problems with climate change,” says Niles, “but it won’t solve the problem with shorebirds.” Unusual weather is just one of many threats that since the 1970s have caused population declines of almost 70 percent for the 50 or so shorebird species living in North America. Each of their migratory flyways contains a fraction of historical habitat; while habitat loss has stabilized in some places, it continues elsewhere, as does pollution and hunting in the Caribbean and South America.

“The problems are not insurmountable,” Niles says. “We have a lot of challenges that are related to climate change, and some that are not. But the fundamental problem is apathy.”