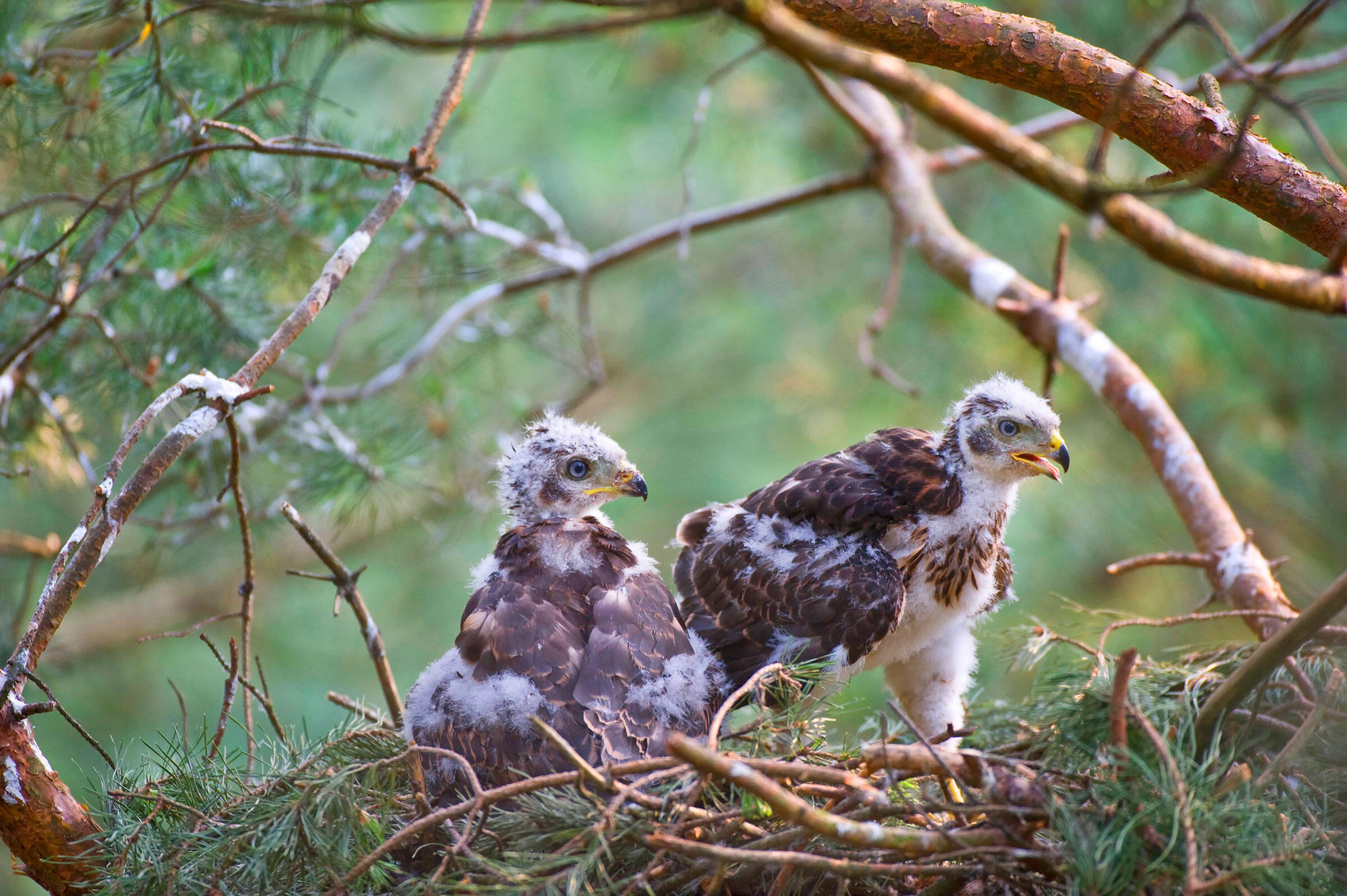 A pair of Northern Goshawk chicks waits for the next nest delivery from their parents. Photo: Blickwinkel/Alamy

From helpless chicks to sassy fledglings, baby birds make quite the journey as they grow. I’ve observed some fascinating behaviors while watching them in the Adirondack wilderness of New York during scouting trips for my avian tours. Studying them for hours from a safe distance helps me understand the trials of surviving in the wild (an important perspective for guides and frankly, anyone who wants to be a dedicated birder). But more importantly, it's taught me that birds are the hardiest of creatures. Even in their most vulnerable stages, they find ways to stay unscathed—often with a little backup from their parents.

For these dexterous raptors, dinner with the family is a rushed affair. I’ve seen a goshawk zoom through the forest like a rocket and drop a Ruffed Grouse—the bird’s favorite prey—to one of its chicks without slowing down. After about a half hour of letting the offspring feed on the grouse, the adult carried it off, likely to finish the leftovers.

2) Young Common Loons like to stick close to mom and dad.

While viewing a pair of Common Loons on a small lake, I realized one had a bulge in its wing. Out popped a tiny, brand-new chick, bobbing on the water like a cork. After the family leaves the nest, parents’ literally take the young under their wings, to brood and protect them. As the babies grow, turning from dark to light, they spend a lot of time riding on their parents’ backs. They also learn to hunt: In what appeared to be a training session, I watched a chick drop a fish too big to swallow, only to be offered it again by the parent.

3) Male Black-backed Woodpeckers do most of the nesting work.

Between digging out the nest, incubating the eggs night and day, conducting constant feedings, and removing fecal sacs (the bird version of diaper duty), Black-backed Woodpecker dads are workhorses. I once saw a female fledge from a cavity that was only three feet off the ground. For the next two hours, only the adult male showed up to tend to her relentless begging calls. In fact, in many years of observations, I've noticed it's almost always the male that supplies the fledglings' food.

4) Red squirrels are a scourge on nests in northern forests.

While checking on a Black-backed Woodpecker site near my home, I noticed that the usual non-stop chirring of the nestlings was absent. A red squirrel had come by and predated on all three babies. The parents were still in fight mode: The male woodpecker was continuously drumming, and the female was vainly flying at the squirrel’s face as it looked out of the now-silent cavity.

Nesting in the northern latitudes in late winter, Canada Jays often have to contend with harsh weather. One freezing, rainy day, I found a female with her wings and tail splayed over her four nestlings—a remarkable little “umbrella.” Another dramatic fact about the jays: The dominant juvenile kicks its siblings out of their territory within a couple months of fledging to reduce competition for resources.

A young Bicknell’s Thrush, just out of the nest, has a wavy bill, fleshy-pink legs, and a stub of a tail. It's what ornithologists call an altricial bird: a species that hatches completely helpless, so adults can spend less energy making eggs and more energy raising offspring. The thrush I'd found on the ground was exhausted; it kept trying to nestle down into the moss, as if it was still up in a balsalm fir. A parent would intermittently show up and shove insects in its mouth. It was a moment of hope, given the tenuous status of the species.