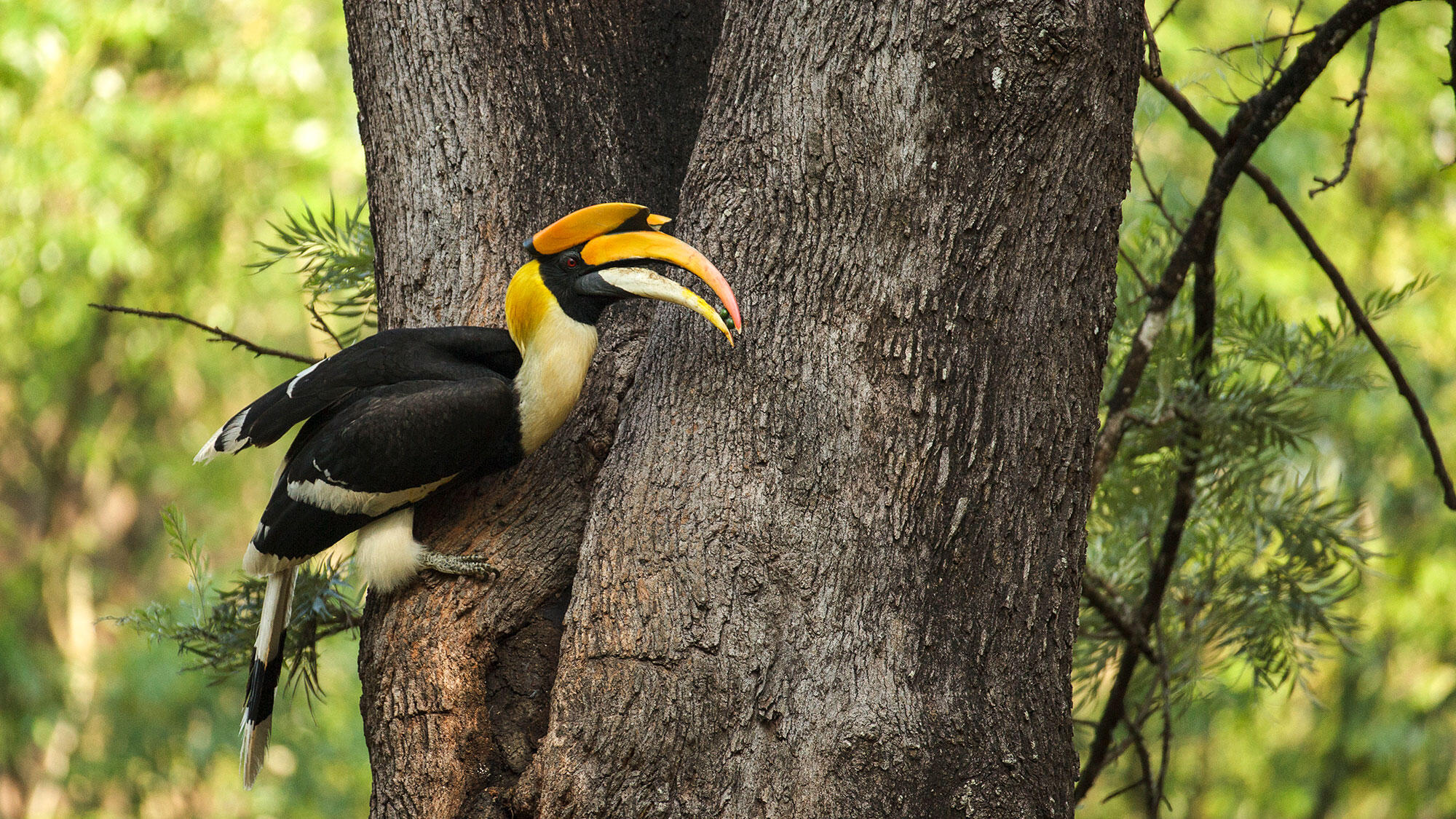 The Great Hornbill is one of the species that will be included, and translated, in the Kerala Bird Atlas. Photo: Rohit Varma

'Snake Bird' and 'Mountain Echo': What Traditional Names Teach Us About Birds

In the Indian state of Kerala, citizen birdwatchers are building their first atlas, which includes both English and Malayalam names.

With its dreamy slogan of “God’s Own Country,” the south Indian state of Kerala is a boon for birders. Its palm-strewn beaches and brackish lagoons play host to some 500 species of birds. It attracts throngs of out-of-towners, and between them and local naturalists, citizen birdwatching has absolutely boomed in recent years; since 2014, Kerala has been responsible for 30 percent of the sub-continent’s eBird data (via 42,000 checklists).

That birding spirit is now being harnessed to create India’s first-ever comprehensive bird atlas. Last summer, Bird Count India, a national monitoring partnership, launched a five-year effort to systematically document all of Kerala's avian life by collecting data from citizen birders. Twice a year, binocular-wielding Keralites will spend at least an hour surveying a habitat patch in their home districts, and then will upload their observations to eBird. P.O. Nameer, head of the Forestry College at Kerala Agricultural University, is helping to oversee the action.

The newly collected data will be combined with 30 years of birding records in the Kerala Bird Atlas, which will illustrate where each species is found in the state, when migrants arrive and depart, and how each population flows over time. The results are slated to be released in a free online database and peer-reviewed paper by 2020. “Kerala is a pioneer among Indian states,” Sahas Barve, a PhD candidate at Cornell University who studies Indian birds, says. The atlas, Nameer adds, is another chapter in the state’s storied history of birding; it started when the British invaded India in 1850s, and has been kept alive in current decades by famed local ornithologists.

In the catalog, each species will be characterized by its taxonomy, English common name, and traditional Malayalam name (Malayalam is the official language of Kerala). The traditional labels are of specific interest because they tend to illuminate interesting aspects of the birds' behaviors, Nameer says.

Nameer gave Audubon a sneak peek of the atlas by sharing some of the featured species and their Malayalam monikers. Here are our favorites:

In Malayalam: Mazhakkocha or "bittern of rain”

The Cinnamon Bittern, generally a shy bird with rufous feathers, becomes more visible in the rain. In fact, its southern migration may be governed by the rainy season, as it breeds during the monsoon.

Much like the long-necked Anhinga (or “water turkey”) of North America’s southern swamps, when the darter swims, its whole body slips underwater, leaving only the bird’s nape visible. From the surface it looks a lot like a swimming snake.

In Malayalam: Malamuzhakki or "mountain echo”

Great Hornbills are most often spotted and heard on the mountainside, where their huge resonating calls echo between the trees.

In Malayalam: Kadalkaḷḷan or "pirate”

Frigatebirds are notorious for their sneaky habit of snatching fish, squid, and jellyfish caught by other birds.

In Malayalam: Viṣhu-ppakṣhi or “festival bird”

In Kerala, Vishu is a festival that celebrates the Hindu New Year. It occurs in April, which is the same month of Indian Cuckoo breeding season. Though the cuckoos are generally quite silent, they become very vocal during courtship, and their calls are heard during the New Year festivities.

In Malayalam: Pampara-kkāda​ or "top bird”

To raise food from the bottom of shallow pools, phalaropes create small, rapid whirlpools in the water by spinning like a top.

In Malayalam: Tīkkākka or "fire bird”

The color of the male trogon's belly is a searing shade of red. The female is light orange on its stomach, tail, and back—almost like the dying embers of a fire.