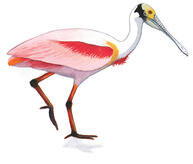 This summer, flocks of colorful frigatebirds, spoonbills, and Red Knots will be flying all over the United States—in the form of a new series of postcard stamps, “Coastal Birds,” illustrated by minimalist designer Tyler Lang.

Lang says he’s loved seabirds since college, when he worked at a shorebird sanctuary. By reducing the birds to their most essential shapes and lines, he says he hopes to highlight their simple beauty:  “You want to see how many things you can take away, without losing the personality and importance of what that thing is.” By doing so, Lang hopes, he can get his viewers invested in the birds’ futures.

Lang and his wife, Elsa, have designed logos for Nike and the New York Times, but stamps were a new frontier. He was surprised but thrilled to be contacted by USPS. “It’s a pretty crazy thing to get an e-mail for,” he says, laughing. “They saw the work that we had done for Audubon magazine, and a few other nature-centric illustrations, and wanted to see if we could take a crack at a few coastal birds.”

The Postal Service sent Lang a long list of birds, and asked him to pick four to illustrate. Lang recognized some of the names—he had seen Roseate Spoonbills on trips to Florida. Others were less familiar: “I don’t know how I hadn’t met the King Eider before, but it’s one of the most amazing, beautiful birds I’ve ever seen . . . it almost already looks like it’s illustrated and painted.”

Lang says he knew he had to include the eider—illustrating unusual, underappreciated animals is his passion—and added that he’d love to do a set of stamps on the “invisible” animals that already live in Americans’ backyards. “People already know what a bison looks like,” he says. “I like the idea of giving a shine to a grasshopper species that we’ve never taken the time to see up close.”

The stamps come at a crucial time for water birds: Sea level rise may soon threaten Red Knot nests, and poor water management is making the Roseate Spoonbill’s future decidedly less rosy. Calling broader attention to the loveliness of these birds is more important now than ever.

You can buy your own set of Coastal Birds postcard stamps here.

Check out Lang's beak project, which he completed for Audubon in 2011. Read the related feature on how birds' beaks suit their dietary habits (and other things) here.

The dizzying diversity of beak shapes is largely a reflection of the foods the birds eat. These are just a few representative examples. Illustration: Tyler Lang