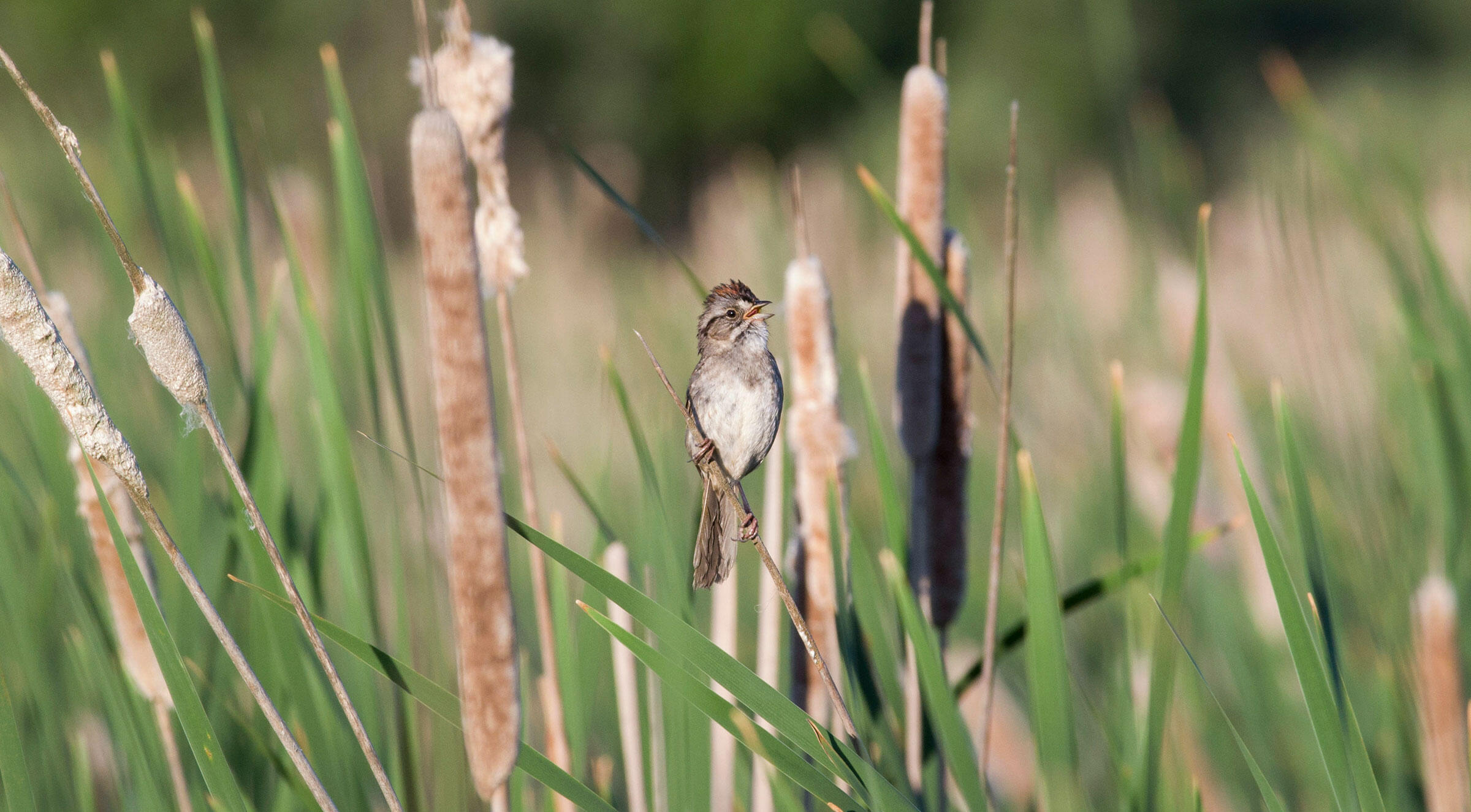 Aside from some regional variance, the song this Swamp Sparrow is singing is likely the same melody its ancestors sang upwards of 1,000 years ago. Photo: Vince F./Alamy

Swamp Sparrows . . . I love their songs. It doesn’t matter to me that they don’t have as many variations as the virtuoso Song Sparrows. To the ear of this professional musician, their songs are an essential component of the wetland musical ensemble of birds, amphibians, and summer insects. That loose, rattling trill is a perfect complement to the emphatic, mechanical pulses of the Marsh Wren’s song.

But behind the seemingly straightforward trill is a very interesting strategy. Some might even call it a Swamp Sparrow tradition.

A paper published last week in Nature Communications indicates that the Swamp Sparrow’s song has been consistent for hundreds or even a thousand years. Scientists from Queen Mary University in London and Duke University in North Carolina recorded 615 male Swamp Sparrows across North America, and found that adults in a specific geography agree on the most important melodies and maintain a shared repertoire. The team then set out to test an idea about conformity that’s previously been studied in Great Tits and stickleback fish.

What they found was that in terms of singing, Swamp Sparrows adopt a different tact than most other species. Young birds often use a process known as crystallization when training their voices. Fledglings first memorize the songs of their species as they hear the notes; some are great at remembering, while others may be less accurate or create new modifications. They then attempt the initial vocalizations the following spring—an amusing, jumbled mess called subsong. Over the next few weeks, the structure of the notes begins to take shape and improve, until the final result crystallizes into a true adult tune. Some species such as Song Sparrows will ultimately have to learn a considerable repertoire to reflect the variations around them.

The Swamp Sparrow’s musical training begins as soon as it leaves the nest, too. But that’s where the similarities in the process end. The Nature Communications study explains that Swamp Sparrows refine the song information they take in and choose what to use and what to discard. During the initial memorization phase, the fledglings internalize what they hear and do so very accurately.

When spring rolls around, the second-year birds practice the songs they hear most, rather than any variants. This is called a conformist bias. Females react more positively to the long-established songs; males respond more aggressively to them. And because adult Swamp Sparrows don’t generally innovate new songs, young birds are likely to carry the same tune—a mark of cultural conformity. As one song is continually used over long periods of time, the local sparrow populace generates a stable tradition.

The shared songs do vary somewhat between locations. Like regional dialects, strains separated by a few counties may sound a little different, says Robert Lachlan, a researcher at Queen Mary University and lead author on the new paper. The tradition, therefore, is specific to one marsh or habitat.

“Culture” may be an odd term to use for bird behavior, but in this context, Lachlan explains that it’s used to denote learning through shared behavior within the group. By way of computer models, he and his colleagues were able to estimate the age of the most common song in their recordings. “Together, these conditions of precise learning and conformist bias would allow song traditions to persist for many hundreds of years,” Lachlan says. “If our model is an accurate reflection of Swamp Sparrow learning, it would demonstrate that non-human cultural traditions can match the stability of those found in humans.”

Tradition doesn’t imply simplicity, however. Even the most basic sparrow songs are technically challenging; they take a great deal of skill and endurance to produce. We might assume that we’re hearing a Swamp Sparrow’s song in all its detail, but because of our imperfect and limited hearing abilities, we aren’t able to perceive the complexity of the long-standing language. Likewise, the Henslow’s Sparrow sneeze comes off as inconsequential—only a spectrogram or slowed-down recording can show just how intricate it is. On the other hand, Song Sparrows might sound more dexterous, as their notes are slower and easier for us to detect, understand, and appreciate.

Yet thanks to Lachlan’s work, we now know that the Swamp Sparrow’s wetland trill is a perfectly memorized, cultural mainstay. These are the classic songs; there’s no need to improve or innovate because they are perfection.

Part four of our new series to help you build your birding skills—and love of birds—by learning how to bird by ear.