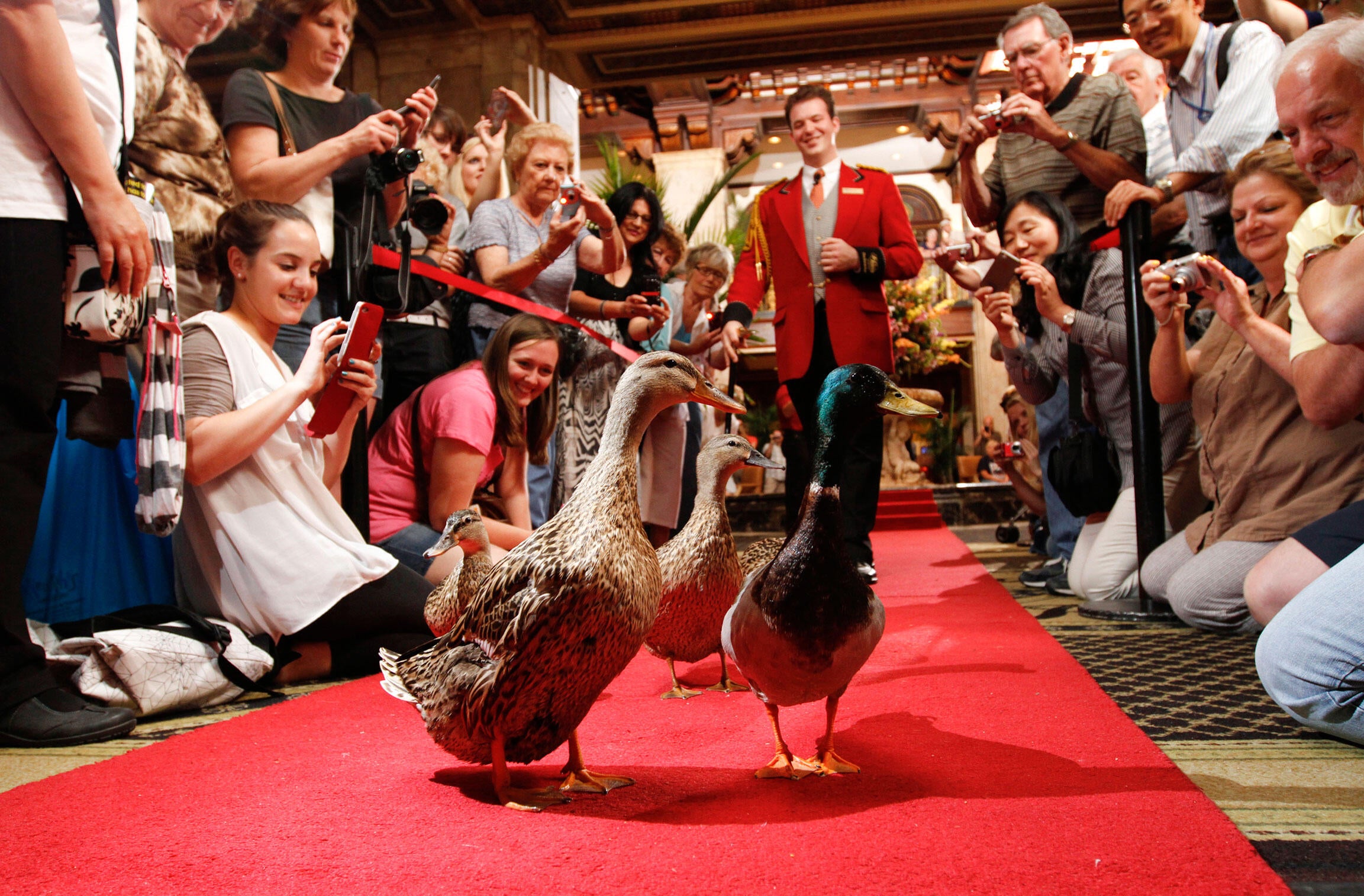 Twice a day, five Mallards march through the Peabody Hotel's lobby, with lead Duckmaster Anthony Petrina close on their tails. Photo: Courtesy of The Peabody Memphis

After more than 80 years, the Peabody Mallards are still marching on, with a young, earnest Duckmaster at their lead.

It's 11 a.m. at the four-star Peabody Hotel in downtown Memphis, Tennessee, and a sharply dressed man has just walked in with an entourage of ducks. They waddle ahead of him, making their way down the plush red carpet, past rows of adoring fans, as the brass of John Philip Sousa’s “King Cotton March” plays in the background. At the end of the runway they stop, before climbing up three stairs and diving into a giant marble fountain. There they lounge until 5 p.m., when the man returns to whisk them away to their room for the night. Guests line the carpet again, cameras and cocktails in hand, waving goodbye as the elevator doors close on the "Duckmaster" and his web-footed protegés.

This is the Peabody Duck March, as performed by the five resident Mallards of Memphis's most-storied hotel. It's a charming tradition that started as a drunken prank . . . 83 years ago. In 1933, after returning from a fruitless hunting tip, with Jack Daniels still hot on his breath, the Peabody’s general manager bitterly released his English call ducks (which he was using as live bait) into the Grand Lobby fountain. The ducks became a sensation with the guests, and soon, the hotel brought in five North American Mallards—one drake and four hens—to take their place. But it wasn’t until 1940 that the bellman Edward Pembroke, a former circus trainer, began training the birds to perform the now-famous march. (See a video of the 2015 version, led by an assistant duckmaster, below.)

During his 50-year tenure as the hotel’s first duckmaster, Pembroke became the face of The Peabody, and in many ways, of Memphis itself. Before his death in 1994, he lifted the ducks to celebrity status, appearing on The Tonight Show Starring Johnny Carson, in People magazine, and even on Sesame Street with Bert and Ernie. It was that classic childhood show that introduced a young Memphis boy named Anthony Petrina to the ducks. “They were marching in front of the puppets, and I thought that was cool,” Petrina says. “But I had no idea that it was a future job opportunity.”

Today, Petrina, 29, is the newest duckmaster, and only the fifth in The Peabody’s history. A graduate of the University of Memphis with a degree in hotel management, he started in the hotel’s restaurant, quickly climbing the ladder from server to supervisor. But the grandeur of the lobby never dulled, and the wonder of the ducks never faded, and when the position opened up and the general manager offered him the title, there was simply no question about it.

Not that the job came with a handbook; for his training, Petrina simply shadowed the former duckmaster for a week before suiting up. After that, everything he learned, he learned on the job—often quizzing the hotel’s senior bellmen about the golden Pembroke years. His daily ritual is simple: He arrives at the hotel every morning around 8:30, heads up to the palace, and cleans, feeds, and bathes the ducks. “The absolute core of my job is the care and protection of the ducks,” Petrina says. “The speaking, the tours, the marching of the ducks in and out—that’s the icing on the cake. None of the fun stuff happens if the ducks aren’t well.”

For the birds, it's a stark change of scenery from the family farm that they're born and raised on. But it all only lasts for a few months. After a three-month stay at the hotel, they’re released into a pond owned by the farm, where they’re free to migrate. Ninety days is the “Goldilocks estimate,” Petrina says; anything longer and “the ducks get a little too used to things here.” While the birds do enjoy some luxuries—their $200,000 “Royal Duck Palace,” located on the hotel roof, is complete with a bronze fountain and a tiny grass-lined replica of the Peabody itself—Petrina takes extra precautions to keep the ducks from growing dependent him. “On the farm, they don’t pick them up and pet them. They don’t feed them out of their hand. They don’t have them in tiny little factory farm pens,” Petrina says. “When they come here, I treat them the same.”

At 11 on the dot, the show begins. Donning a scarlet-and-gold-trimmed jacket, Petrina leads the Mallards downstairs, a brass, duck-topped cane in his hand, and a business card that reads: “Anthony Petrina: Duckmaster” in his pocket. It’s been four years since he first started marching, but he believes his work has only just begun. “I feel a huge responsibility. There’s a lot behind me,” Petrina says. Then he gets wistful. “Like Mr. Pembroke [once] said, ‘I haven’t found a reason to quit yet.’ So here I am. Maybe in 46 years I’ll get my picture up on the wall, too.”